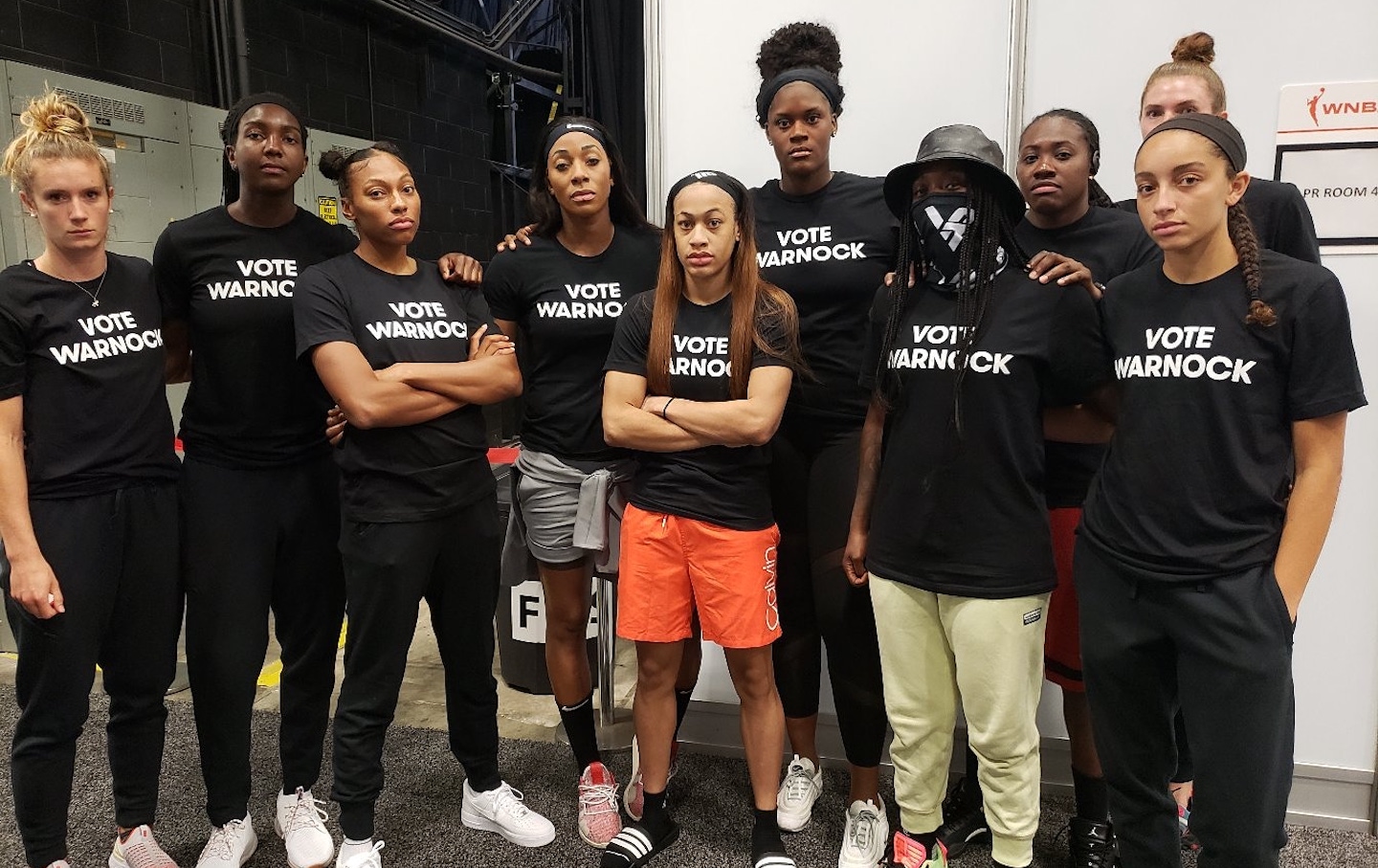 WNBA players show their support for the Rev. Raphael Warnock in the runoff election in Georgia on January 5, 2020. (Elizabeth Williams via Twitter)

WNBA players are having a moment. Pundits and politicos across the spectrum are pointing out that without the support of the basketball league, the Rev. Raphael Warnock would be returning to Atlanta’s Ebenezer Baptist Church instead of heading to Washington, D.C., as Georgia’s first-ever Black senator.

The story is by now well-known. WNBA players spent their summer and fall wearing Vote Warnock shirts, standing with his candidacy against WNBA franchise owner Kelly Loeffler. This included players on the team Loeffler owns a 49 percent stake in, the Atlanta Dream. The WNBA players opposed Loeffler less for her Republican politics than for the fact that she ran an ugly campaign against the Black Lives Matter movement—the “mob,” as she described those who protested the police murder of George Floyd—and even the right of her own players to have a political voice. She also posed for photos with a leading Klansman, supported Donald Trump’s coup efforts, and refused to meet with WNBA players who invited her to a conversation about the campaign.

One of those players was Layshia Clarendon of the New York Liberty, who said to me me after the Georgia results were in, “Holy shit, we just flipped a Senate seat! Not only did we oust Leoffler but we helped a progressive candidate we truly believe in win. That is something I want to be clear about in our intention as a league—this wasn’t simply a targeting of an owner for one comment, but an organizing around maintaining our values as members of the WNBA. I’m feeling like the power of collective action from athletes is just now starting to scratch the surface—the country better get ready.”

Another of those players was Atlanta Dream point guard Renee Montgomery. Montgomery took this year off from playing because of concerns about racism and the pandemic. She is a committed activist and, predictably, in a state of what I would call thrilled relief. I was able to get a comment from her about the vote: “I’m excited for the win for Warnock, who will be an excellent senator, but I’m equally excited for the win for democracy. Our community is taking back our power one vote at a time. This is only the beginning.”

Montgomery’s words are very intentional. She said “win for Warnock,” not “loss for Loeffler.” Clarendon also very pointedly said, “Not only did we oust Kelly Leoffler but we helped a progressive candidate we truly believe in win.” The WNBA players took great pains in deciding to support Warnock and not merely voice their opposition to Loeffler’s using them like they were Sister Souljah with a jump shot. They Zoomed with Warnock, debated and discussed his politics, and in the end lent him their backing. That had the power to not only take down Loeffler—after all, who knows a boss better than their workers?—but also drive up the positives for Warnock, who was polling at 9 percent on the day the WNBA players started campaigning on his behalf.

Montgomery says, “It is only the beginning.” That could mean all kinds of things. It could mean that it is the beginning of a new era of athlete activism in the electoral realm. It could mean that the Rev. Warnock will be the first of a new wave of Black senatorial candidates. But it could also mean something far more dangerous to the “minders” of sports. It could mean that franchise owners—billionaires whose money has often been made in the most unsavory of ways—will no longer get carte blanche to market their league as progressive and “woke” while also supporting politicians who traffic in division and bigotry. These franchise owners are often, as Loeffler proudly described herself, “to the right of Genghis Khan.” No longer will they be allowed to rampage with impunity. No longer will pro sports teams become money laundering operations where franchise owners get millions in public money and turn around and use that money to underwrite politicians that “the public” would otherwise never support. No more profiting from Black bodies while disregarding Black lives.

This is a very different situation than in 2014 when Donald Sterling, franchise owner of the Los Angeles Clippers, was caught on tape saying all kinds of racist drivel and forced to sell his team. No one caught Loeffler on tape. She did not drop any slurs in between her photo ops with Klansmen. This was a straight-up rejection of her politics and a statement that she has no place in the WNBA and no place in the United States Senate. The next step, which feels inevitable at this point, will involve Loeffler selling that 49 percent stake in the Atlanta Dream and leaving Georgia as quickly as she moved there from Chicago in order to be handed a Senate seat. As for the sports world, the WNBA players have put the ownership class on notice: No longer will you do your political business in shadows while we look the other way. Athletes have long had the power to expose the ugly side of the owners. But the WNBA players are the first to flex it. They won’t be the last.