At the end of the Civil War, the Union extended a broad amnesty to those who fought for a white supremacist rebellion. But those pardoned Confederates did not abandon their cause when they left the battlefield, as The Nation documented at the time. Thousands joined the Ku Klux Klan, which was founded in 1865 and by 1870 had chapters in every state. Many other former Confederates wormed their way into political and academic institutions, using their positions to create systems that would achieve the ends of the Confederacy.

The two strategies complemented each other. The Klan and the White League killed and intimidated Black voters, allowing Confederate Democrats to win elections, take office, and repress civil rights. In the decades following the Civil War, four Confederate generals attained the same rank in the US Army, and 15 Confederate officers served in the State Department, 18 became college presidents, and three were selected as Supreme Court justices.

A century and a half later, members of a Confederate “heritage” organization still fill influential roles. From an Atlanta antifascist group, I obtained an e-mail database from the Sons of Confederate Veterans. The SCV are the male counterpart to the United Daughters of the Confederacy, which shows their members in high-ranking positions in the military, law enforcement, and academia. The list includes more than 57,000 names from all 50 states, and contains the names, addresses, and e-mail addresses that members gave when signing up for the group. Thirty two thousand are “active” members. Seventy-one members of the group signed up to receive SCV news using a .mil e-mail and 46 used .gov e-mails, outing themselves as military or government employees. The database also includes 204 .edu e-mail addresses, many of which belonged to faculty.

The SCV’s stated goal is the “vindication of the cause” of the Confederacy, and the group requires members to be directly descended from soldiers in the Confederate Army. The group formed in 1896 to join the United Daughters of the Confederacy in campaigning to build Confederate monuments. The organization says it is not racist and “non-political” and that it does not advocate violence. According to the Southern Poverty Law Center, while the SCV tries to maintain a respectable public face, the group has significant membership overlap with the League of the South—an organization that defends slavery, believes in “European cultural hegemony,” and claims the federal government is an organized Jewish conspiracy—and the Council of Conservative Citizens, which openly opposes “all efforts to mix the races of mankind.” Members of the SCV marched at the Unite the Right Rally in Charlottesville, stood alongside neo-Nazis in Pikeville, Ky., and posed for photos with David Duke, a former grand wizard of the KKK. Others are sheriffs’ deputies, Army officers, US marshals, and professors.

At least three SCV members were named in Sines v. Kessler, a civil suit in which students, clergy, and protesters were awarded millions of dollars in damages for emotional and physical injury caused by the deadly Unite the Right rally, including Matthew Heimbach, a prominent neo-Nazi who joined SCV while at Townson University, where he also established the Traditionalist Youth Network—an offshoot of the Nazi Traditionalist Workers Party; Michael Hill, the founder of the League of the South; and Michael Tubbs, a leader in the League of the South and a former Green Beret who was previously arrested for stealing explosives from the military and planning to use them to kill Black and Jewish people.

SCV members are organized into more than 1,000 “camps” with “commanders” and others holding pseudo-military ranks. Each camp has a degree of autonomy to hold reenactments, meetings, and campaigns to preserve and create symbols of the Confederacy. In 2011, for instance, the Mississippi camp lobbied to feature Nathan Bedford Forrest, the first grand wizard of the Klan, on a specialty license plate.

On the SCV homepage, would-be members are enticed with the slogan, “If you are interested in perpetuating the ideals that motivated your Confederate ancestor, the SCV needs you” underneath a “Make Dixie Great Again” banner. Elsewhere on the page, you can download a “Heritage Defense Manual” that lays out the organization’s interpretations of the Civil War, slavery, and history. The document repeats a series of myths about US history, calling those who claim the Civil War was about slavery “bigoted against the South” and making the false assertion that most Black Americans are descended from indentured servants of the 19th century.

In 2002, a group called Save the Sons of Confederate Veterans split off from the main organization, claiming that SCV had leadership overlap with openly racist groups such as League of the South and the Conservative Citizens Council, but the SSCV disappeared after a year. And more recently, the SCV has begun to deliberately provoke people. What started as a group that mostly concerned itself with plaques and debates about history began to agitate for the increased presence of Confederate symbols in public places. In 2017, Ryan King, a member of both the League of the South and SCV, was convicted of assaulting an antifascist counterprotester at a Richard Spencer speech. King and other neo-Confederates attended the Unite the Right rally at Charlottesville later that year. Following Charlottesville, the SCV began a campaign called “Flags across the Carolinas” in which they attempted to place Confederate “mega flags” on private property adjacent to highways. In June 2020, the group hired a plane to fly a Confederate-flag banner and the slogan defund nascar over the Talladega Superspeedway in Alabama after the racing organization banned Confederate flags at racetracks. 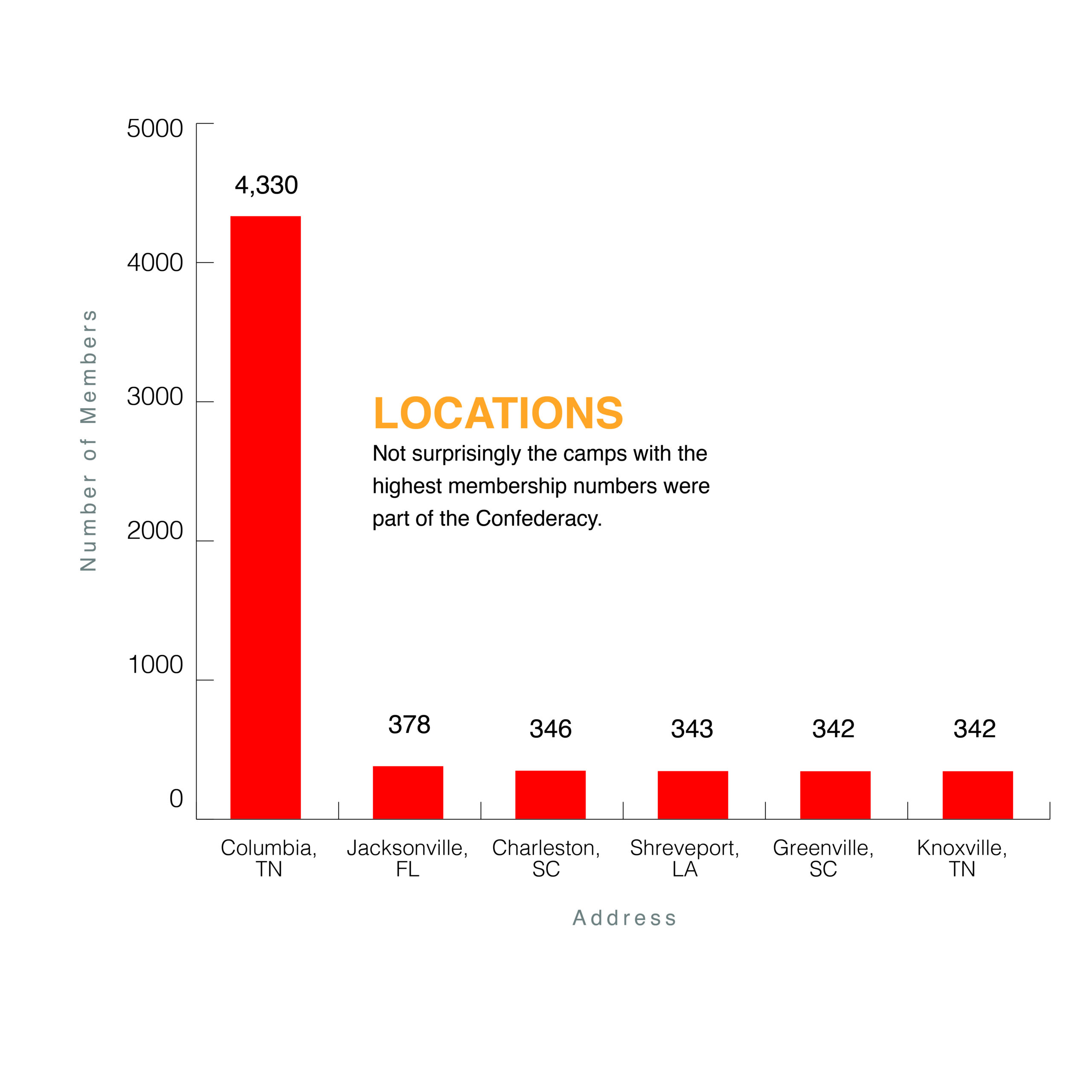 There are SCV camps in all 50 states, but the most populous camp is number 584, located in Columbia, Tenn., with more than 4,300 members. Camp 584 is the SCV headquarters—and many in this number are likely members at large who joined to receive a certificate that allegedly proves their Confederate ancestry, but may have little involvement in their group. The next most numerous camps are in mid-sized cities in the South. 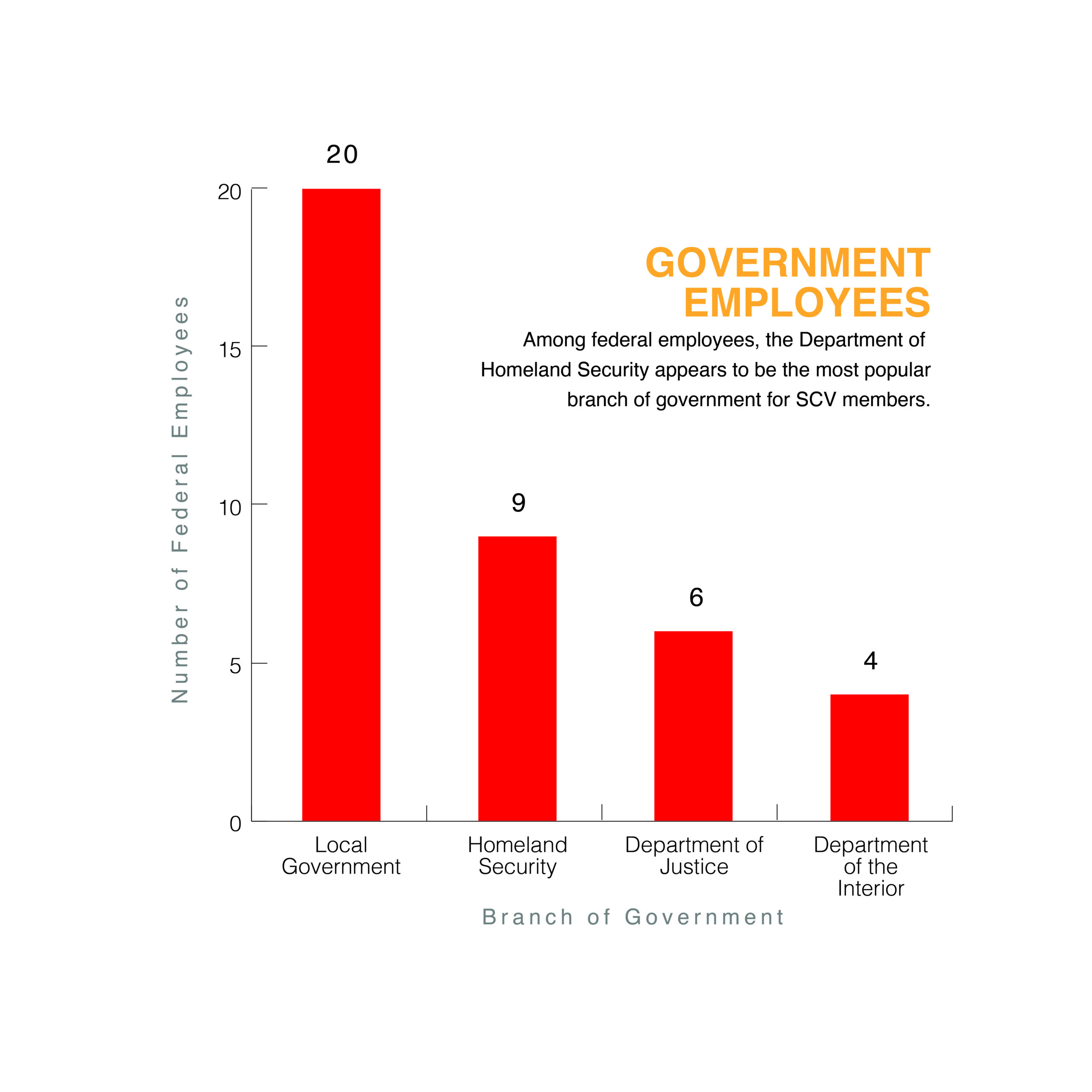 Forty-seven civilian government employees signed up to receive the latest news SCV using their .gov e-mail addresses. Included in the list was at least one employee from the Immigration and Customs Enforcement (ICE)—Anthony Putnam, a deputy assistant director who is in charge of enforcement and removal operations training programs and manages a “budget in excess of $12M,” according to his LinkedIn page. Three employees of the Bureau of Prisons, which falls under the Department of Justice, are also on the e-mail list.

Other federal employees in the group included a US marshal, at least four employees of the Federal Law Enforcement Training Centers (FLETC) in Glynco, Georgia, and nine at the various agencies that make up the Department of Homeland Security.

The e-mail list also contains local government and law enforcement officials, a sheriff’s deputy in Gloucester County, Virginia, and a crime analyst at the Montana Department of Justice. 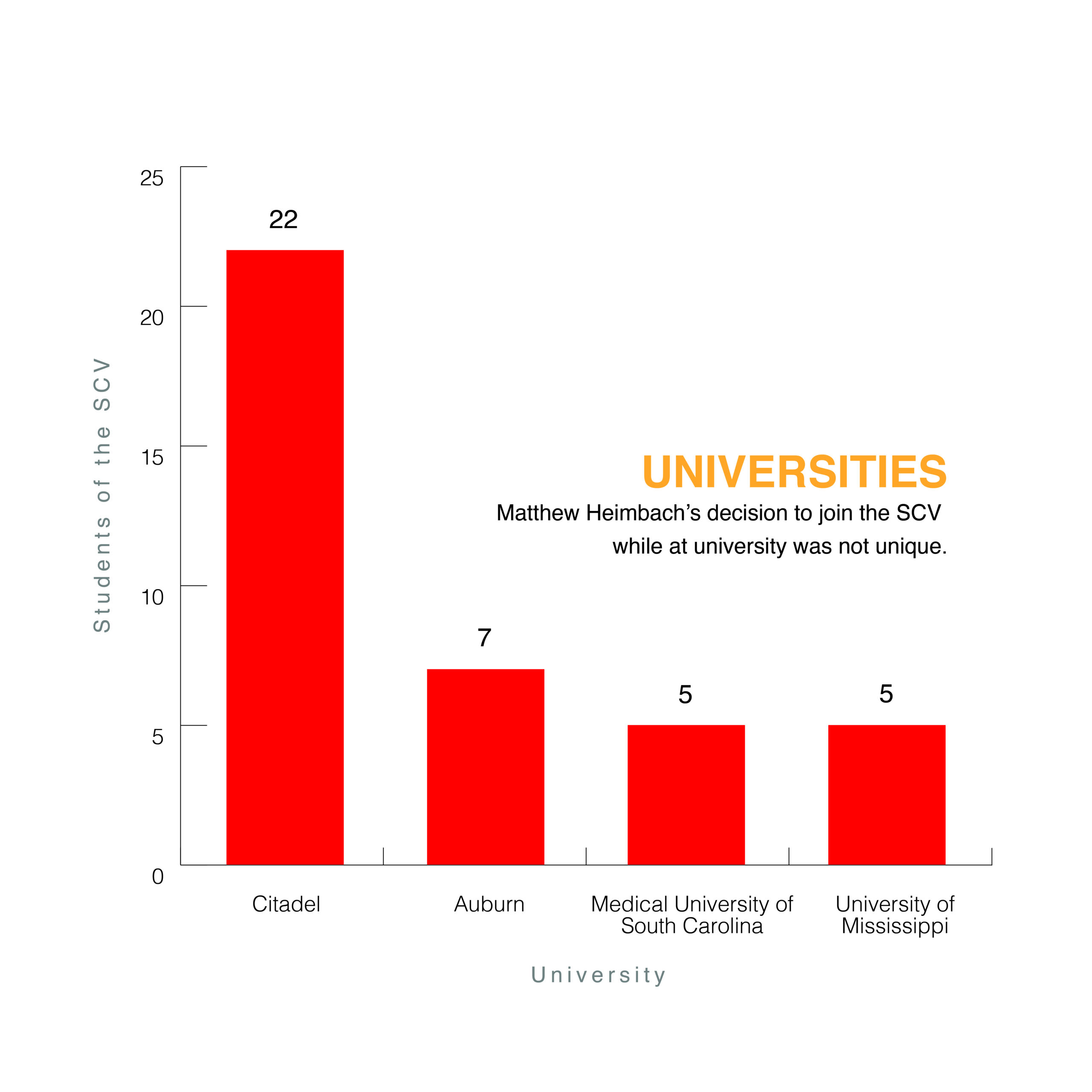 Students and faculty from colleges were on the e-mail list as well. Notably the Citadel, a military college in South Carolina. Twenty-one citadel.edu e-mail addresses appear on the list, including two faculty members. Another notable academic SCV member is Daniel Sanders, a mathematician who has taught at Princeton and Columbia.

Five Georgia Republican state legislators appear on the SCV list, including Tommy Benton from Jackson Country. Benton, who is open about his membership, once said, the KKK “wasn’t so much a racist thing” during a debate on the preservation of the Klan monument at Stone Mountain, Ga., and claimed in a 2020 radio interview that the late Representative John Lewis’s “only claim to fame was he got conked on the head at the [Edmund] Pettus Bridge…and he has milked that for 50 years.”

State Senator Jeff Mullis, who recently authored a bill protecting Confederate statues, is also in the group. Mullis entered “Sen. Jeff” as his first name in the database, making his presence rather obvious. Former judge, federal prosecutor, and North Carolina State Republican party chair Samuel Currin, who was convicted of money laundering in 2007, is also on the SCV list. 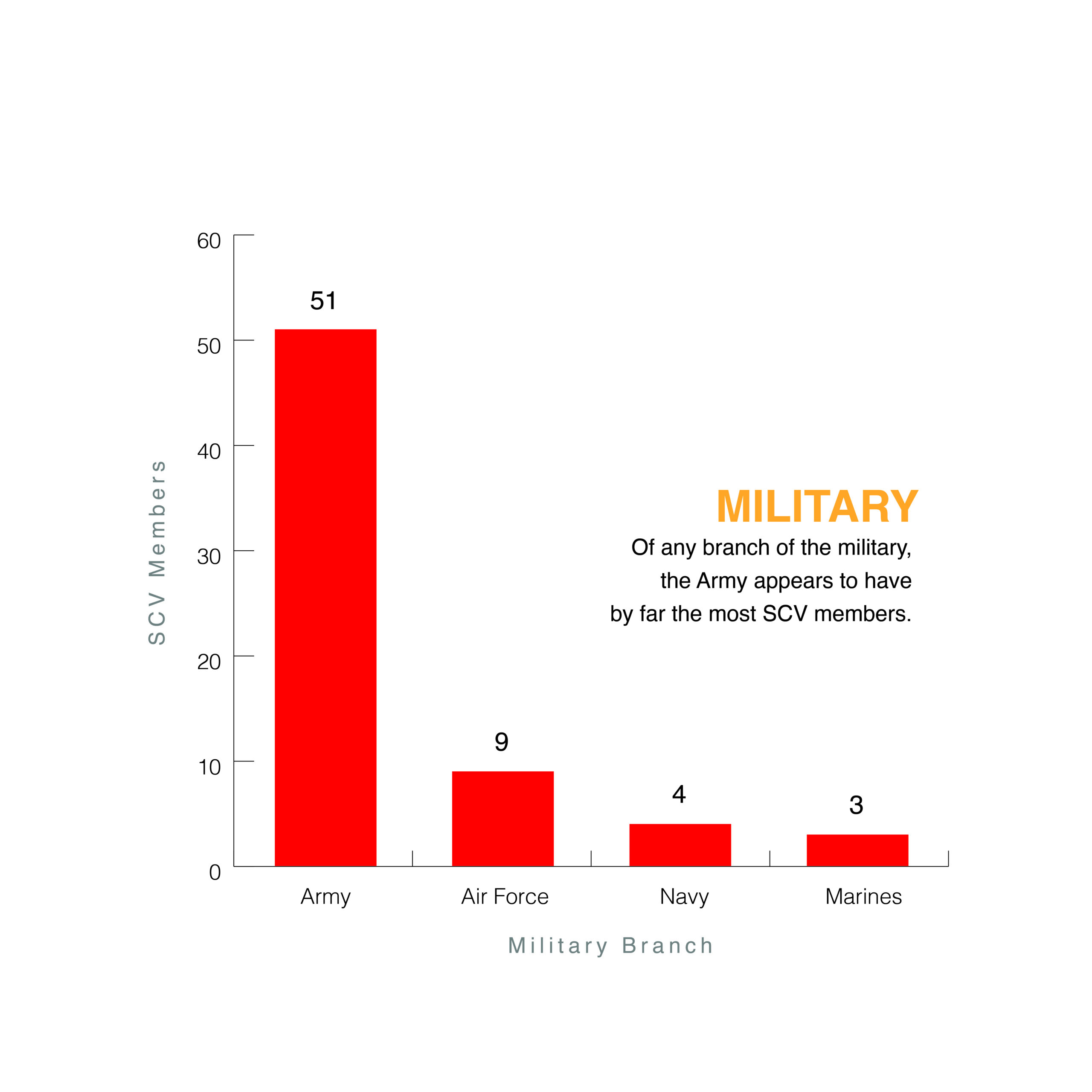 Although it was not possible to identify all the active-duty service members on the list, I could see those who used US military e-mail addresses or Army Post Office addresses. In total there were 72 military e-mails with 48 of those coming from dues-paying members. Several officers, including an Army lieutenant colonel, appear on the list.

When asked how the military would respond to allegations that membership in a neo-Confederate group, even a nonviolent one, was evidence of racial bias, both the US Marine Corps and the US Army provided boilerplate statements. Maj. Jorge A Hernandez, a communication strategy and operations officer for the Marines, told me, “The Marine Corps is clear on this: There is no place for extremism in the Marine Corps. Our strength is derived from the individual excellence of every Marine regardless of background.” Neither branch would clarify exactly what would rise to the level of disciplinable extremism.

The Defense Department’s policy on extremism states that “a service member’s right of expression should be preserved to the maximum extent possible.” Todd Helmus, a ​​senior behavioral scientist and affiliate faculty member at Pardee RAND Graduate School, explained to me that the military is in the middle of revising its policy on racism and white supremacy, and a report will be delivered to the secretary of defense soon. However, under the current rules, he said, “mere membership in a group or mere ideology is not sufficient.… There has to be some sort of impact on performance of duties.” There are exceptions for some specifically named groups, and that list may soon be growing, but as things stand, the SCV members would have to “engage in discriminatory behavior in order to invite military sanctions.” That means that right now a member of the US military can be a member of a neo-Confederate organization.