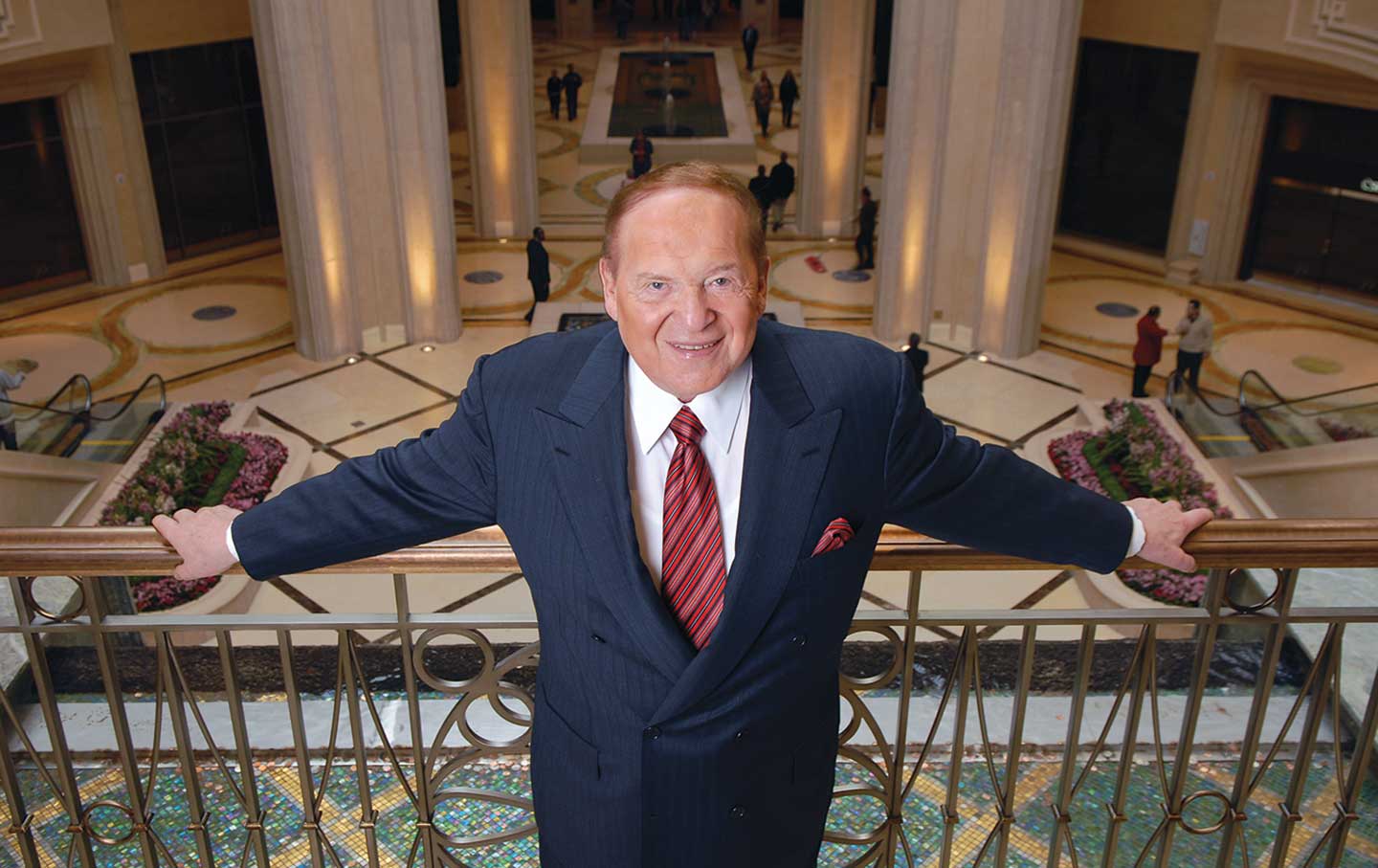 By dying, the casino magnate Sheldon Adelson did Benjamin Netanyahu one last favor. Adelson had been scheduled to testify as a prosecution witness in the Israeli prime minister’s corruption trial. Netanyahu allegedly used Adelson to secure more friendly coverage from a major Israeli newspaper. The complications of the case are too arcane to explain in this limited space, but take it from me: Wherever Adelson went, corruption—be it moral, legal, political, or cultural—was never far behind.

In 2013, when he paid $47 million to the US government to avoid criminal charges for his role in a money-laundering and drug-trafficking operation, it amounted to just around 0.1 percent of his wealth. Adelson used to brag that he was the “richest Jew in the world.” While not precisely true, it wasn’t far off: He died in January with a fortune of nearly $35 billion.

Adelson was a right-wing extremist whose passion was Israel. “The two-state solution is a stepping stone for the destruction of Israel and the Jewish people,” he told The Jewish Week, adding that if that meant “Israel isn’t going to be a democratic state, so what?”

Israel has strict campaign-financing laws, so Adelson got around them by launching a free daily newspaper in 2007 called Israel Hayom, and he later appointed his Israeli American dual-citizen wife, Miriam Adelson, as its publisher. The Adelsons spent freely on talent, and many of Israel’s best journalists could not resist their entreaties. The only political interventions he insisted on involved Netanyahu: The prime minister was to be the hero in all stories in which his name appeared. By 2010, Israel Hayom had the highest newspaper circulation in Israel, dwarfing the circulation of the left-leaning Haaretz by a margin of more than six to one.

He also bought up newspapers in the United States, including Nevada’s largest paper, the Las Vegas Review-Journal, which he purchased using a cutout holding company to hide his identity. He then fired its most honest political journalists following an unsuccessful staff rebellion. Adelson was apparently so desperate to own the paper that he paid $140 million for it—$38 million more than its entire parent chain had sold for just nine months earlier.

But more important was the way Adelson bought up politicians in the world’s most powerful nation. Former House speaker Newt Gingrich, believe it or not, was once quite pro-Palestinian. He argued in 2005 that it was “vital to our credibility in the entire Middle East that we insist on an end to Israeli expansionism” and “vital to our humanitarian duty to the Palestinian people that we protect the weaker party from the stronger power.” That was before the Adelsons invested $20 million in his 2012 presidential campaign, at which point Gingrich decided that Palestinians were an “invented” people who “had a chance to go many places” but apparently preferred a life of refugee camps and military occupation.

In March 2014, as the Republican presidential primary was still in what pundits call its “beauty contest” phase, Adelson summoned the contestants to the Venetian hotel in Las Vegas to have them parade their ideological wares, as each sought to leave with the multimillion-dollar contributions he planned to bestow. During Chris Christie’s plea, the New Jersey governor used the term “occupation” to refer to Israel’s occupation of the West Bank. This word, however, was verboten. Learning of his faux pas, Christie rushed back to Adelson and, according to reports, “apologized in a private meeting in the casino mogul’s Venetian office shortly afterward.”

A living, breathing advertisement for strong campaign finance legislation as well as catnip for anti-Semitic conspiracy mongers, Adelson spent more than a half-billion dollars on Republican candidates between 2012 and 2021. In doing so, he transformed our political discourse and essentially became the final authority on Donald Trump’s Middle East policy.

There is, however, no reason to celebrate his death. There’s that $35 billion, and the fact that his widow has been, according to many, the driving force behind the couple’s political agenda. For all those groups undermining both American and Israeli democracy at the Adelsons’ behest, his memory is certain to continue to be a blessing.