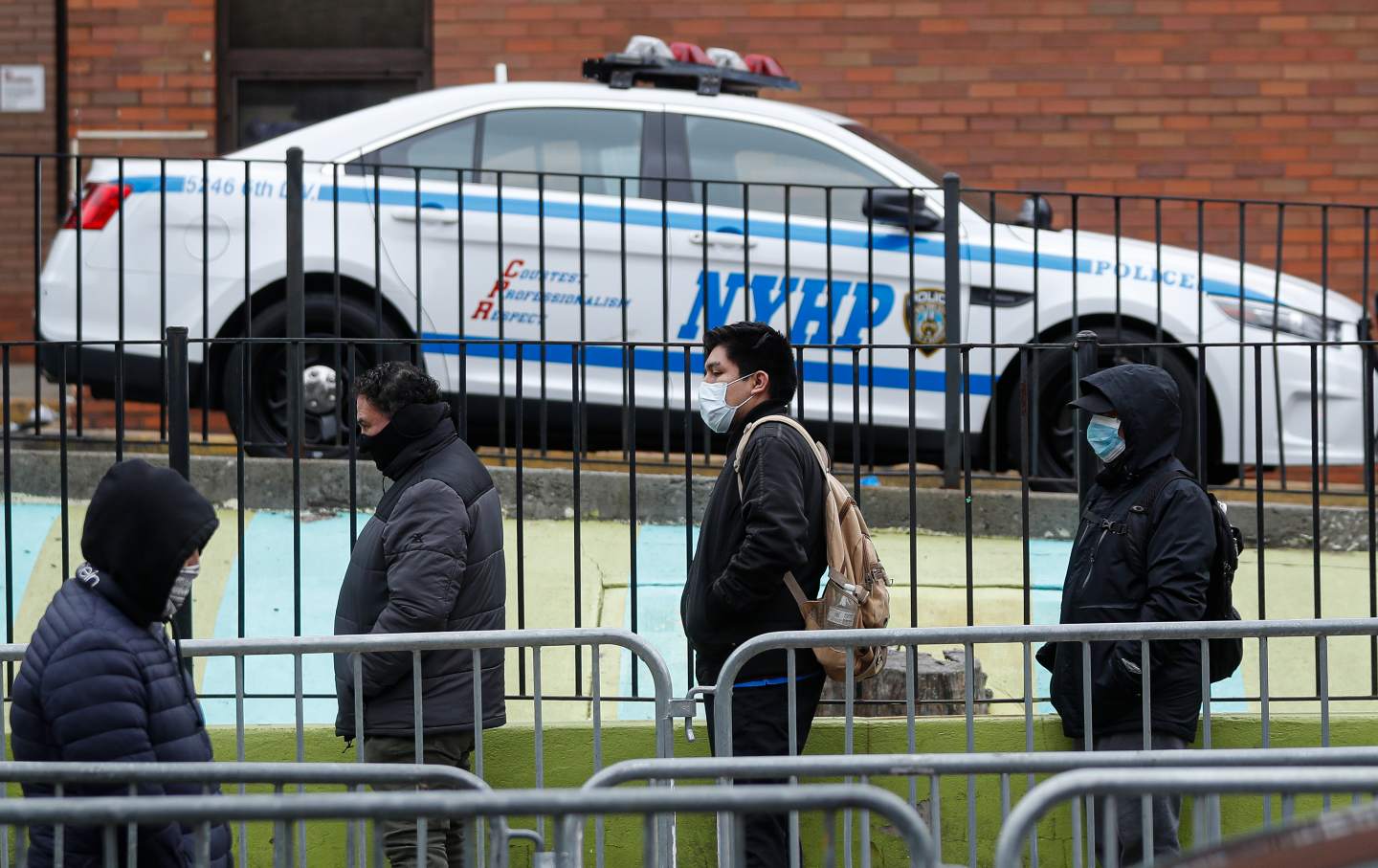 In late March, New York City police arrested a woman for allegedly standing with her boyfriend and others in a Brooklyn parking lot. The police claimed she “failed to maintain social distancing” and charged her with unlawful assembly, disorderly conduct, and obstructing governmental administration. Recounting the incident to The Intercept, she described officers without masks transporting her to Central Booking, where she spent 36 hours in a jail cell with more than 20 other women without access to soap. Once released, her employer barred her from work, afraid that she’d been exposed to the coronavirus while in custody.

For Andrea Ritchie, a researcher with the Interrupting Criminalization initiative, this episode epitomizes the problem with trying to police our way to public health. “It’s just the most twisted, deranged logic I’ve ever heard,” she said. “Like, we’re literally going to walk within six feet of you to tell you you shouldn’t be within six feet of people you might be related to or working with…and we’re gonna have law enforcement officers, who in New York City have the highest rates of infection outside of Rikers, hand IDs back and forth, put you in a car, and then put you in a cell with dozens of people and leave you there for days, all in the name of keeping you six feet away from people?!”

Far from keeping anyone safe, the officers’ enforcement of New York’s shelter-in-place orders exacerbated the risk of transmission for themselves, the detainees, the workers at the detention center, and by extension all of their families and communities.

Distressingly, this was not an isolated incident. “Policing the pandemic” appears to be widespread: Multiple states have imposed fines or arrested folks for being in parks or gathering in groups. Some cities have charged folks with reckless conduct for coughing, and others like Portland, Oregon; Asheville, North Carolina; and Minneapolis, Minnesota have encouraged residents to call non-emergency police numbers to report their neighbors for breaking rules. While adhering to social distancing guidelines is crucial, criminalizing violations in the name of public health is counterproductive, and threatens the very communities most vulnerable to the pandemic.

Undoubtedly, slowing the spread of Covid-19 by minimizing close contact with others is a vital act of solidarity that stands to save vast numbers of lives. Since the beginning of March, jurisdictions across the country have issued lockdown orders, indefinitely closing bars, restaurants, shops, workplaces, and schools, and urging residents to stay at least six feet away from each other. But the ability to follow such strict protocols is split along class lines: While wealthy white professionals may be able to largely avoid public intermingling by telecommuting, poorer people of color are more likely to work essential low-wage jobs, and return home after shifts to more crowded housing. If the rich can combat cabin fever by going out into the yard, the poor often have few options outside of public parks. While the former socialize with friends and family over video conferencing apps, many in the latter lack a broadband Internet connection. Unsurprisingly, Covid-19 has disproportionately ravaged poor communities of color, where people are more likely to suffer from comorbidities like obesity, diabetes, and lung disease that worsen health outcomes after contracting the virus. As Seton Hall public health law professor Jennifer Oliva bluntly put it, “Some people simply have to go outside.… You’re not getting your Amazon delivery when you’re in your bougie Bergen County gated community without somebody working.… People still have to do all sorts of things to keep you able to sit in your home and do whatever you’re doing.”

Before Forcing the Vote on Medicare for All, We Must Build Power

What’s Keeping the Vaccine From Getting to Those Who Need it Most?

Well-meaning proponents of social-distancing enforcement would surely insist that crackdowns ought to be reserved for, say, entitled spring break revelers too selfish to to protect others, rather than overstressed grocery employees escaping abusive partners by meeting friends in a park. But that’s not how policing works. “Those laws and practices always get turned against people who are already perceived to be a threat, and that’s black communities, brown communities, indigenous communities, migrant communities, disabled communities, unhoused communities,” Ritchie explained. “And that’s who’s going to be bearing the brunt of this, not the spring breakers.”

But even if it were possible to restrict social distancing penalties to the privileged and morally egregious, we still shouldn’t. Beyond spreading germs in its own right, police enforcement reinforces dangerous narratives about infectious disease transmission, according to Alexander McClelland, a scholar of HIV criminalization who himself lives with HIV. “They’re trained to respond to complex social situations with force,” McClelland said. “And they use the logic of the criminal justice system, which is focused on a victim/perpetrator dichotomy.” Reducing patients to disease vectors is dehumanizing, and it frames infectious disease as a scourge unleashed by individuals who must be controlled rather than cared for. Such a strategy is ineffective, as HIV criminalization laws have shown: One review study found no conclusive evidence that laws affect disclosure or risk behaviors, and another concluded that criminalization dissuades people from getting tested. While every disease is different, there’s no reason to believe that policing will work for Covid-19 when it has failed repeatedly in the past. It is easy to imagine the stigma of criminalization pushing people toward higher risk behaviors: putting off testing for fear of social rejection or hosting poorly ventilated gatherings indoors that would have been safer in parks.

Instead, McClelland said, people can and do practice safe behaviors without being coerced. Throughout the pandemic, public messaging from elected officials has been notoriously inconsistent—and, at times, brazenly wrong—surely sowing confusion about what “social distancing” even entails. One recent poll suggested that more than half the residents in five states did not know whether their state had a stay-at-home order. Effective education and resources, including support for anyone encountering challenges following directives, are better disseminated by credible community members than by police.

People who have the resources and wherewithal usually do the right thing, especially in a crisis. Keeping each other safe requires good faith and solidarity, not censuring individual transgressors.