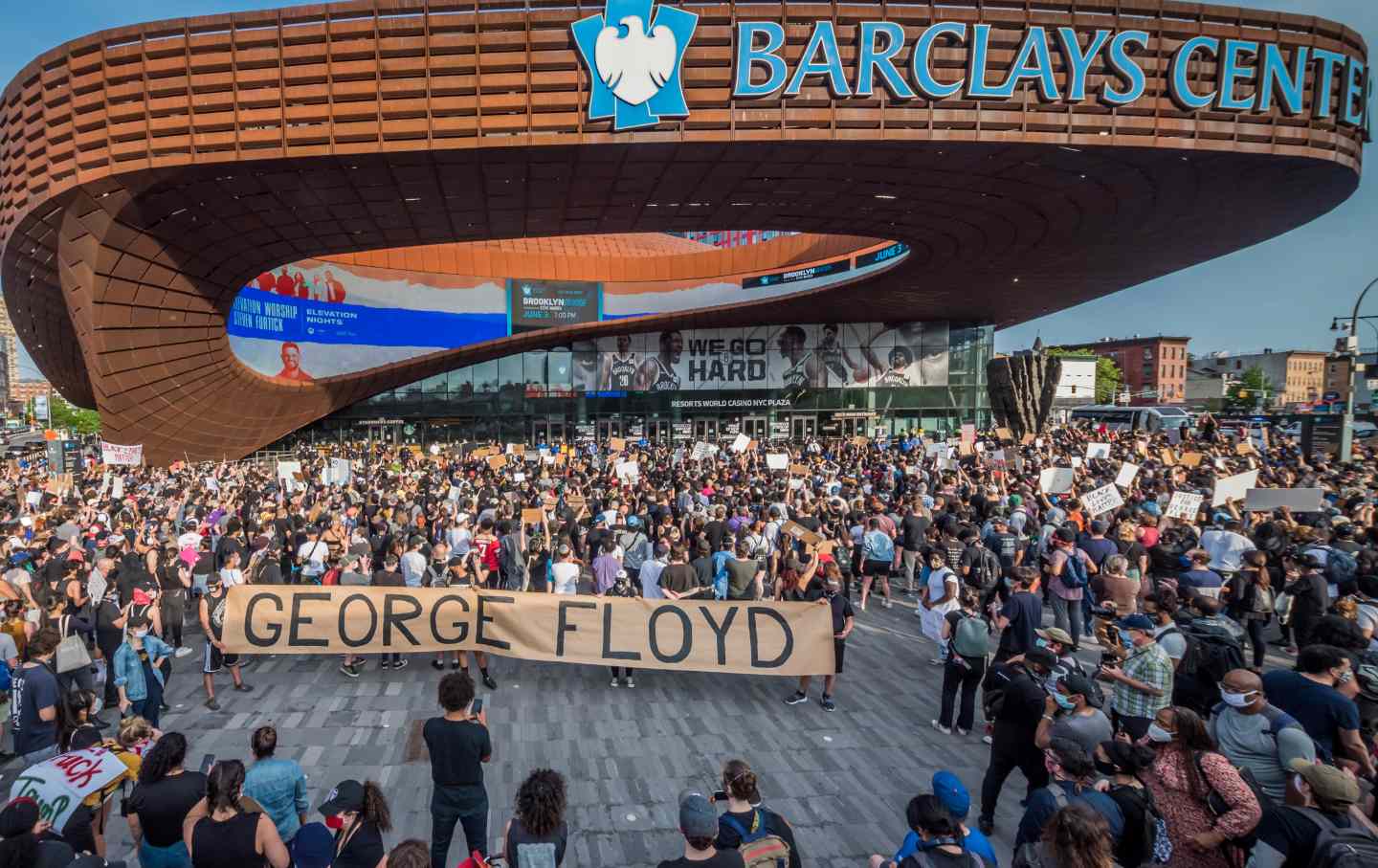 Protesters outside the Barclays Center in Brooklyn, NY, in May, 2020. (Erik McGregor / LightRocket / Getty)

Kyrie Irving, the All-Star point guard for the Brooklyn Nets, is often mocked in the press for being, shall we say, “out there” with his opinions on a wide array of subjects. It’s been debated whether he has been sincere or engaged in performance art, mocking the media’s willingness to take him seriously and furtively chase like mice whatever crumbs he throws in their direction. Yet there is nothing performative—not a hint of artifice—in the ideas that Irving is currently expressing.

Irving has organized a coalition of players who range from hesitant to militantly opposed to restarting the NBA season during the ongoing pandemic as sequestered employees in a bubble in Orlando. With news of recent coronavirus spikes in Florida, some players believe that resuming the season is fundamentally unsafe. But others, including Irving, have a different reason not to take the court right now: the national movement against racist police violence. These players think the issues of racial justice and stopping police violence are so pressing at the moment that the NBA runs the risk of becoming a distraction to the movement in the streets.

On a conference call with around 80 players, Irving said that he would be “willing to give up everything” for the cause. He also said, “I don’t support going into Orlando. I’m not with the systematic racism and bullshit. Something smells a little fishy. Whether we want to admit it or not, we are targeted as black men every day we wake up.”

He isn’t alone in the belief that now is not the time for pro basketball. Former NBA player Stephen Jackson, who was friends with George Floyd and has been leading struggle in the streets, said on Instagram:

I love the NBA, man. Now ain’t the time to be playing basketball, y’all. Playing basketball is going to do one thing: take all the attention away from the task at hand right now and what we’re fighting for.

These players are serious about the politics of what they are proposing, and the risks. Also on the conference call with players was 1968 Olympic bronze medalist Dr. John Carlos, who gave them an earful about the need for the struggles of the past. Carlos also gave his firsthand account of deciding whether to boycott or bring the politics to the field of play: the fundamental question that black athletes faced in the lead up to the 1968 games.

The group of rebels, which includes players from the WNBA and people who work in the entertainment industry, issued a statement to Adrian Wojnarowski at ESPN that reads in part:

We are a group of men and women from different teams and industries that are normally painted as opponents, but have put our egos and differences aside to make sure we stand united and demand honesty during this uncertain time. Native indigenous African Caribbean men and women entertaining the world, we will continue to use our voices and platforms for positive change and truth.

We are truly at an inflection point in history where as a collective community, we can band together—UNIFY—and move as one. We need all our people with us and we will stand together in solidarity.

As an oppressed community we are going on 500-plus years of being systemically targeted, used for our IP [intellectual property]/Talent, and also still being killed by the very people that are supposed to “protect and serve” us.

WE HAVE HAD ENOUGH!

This effort is already running up against obstacles. Two of the biggest mouths in sports media, Stephen A. Smith and Charles Barkley, have voiced their displeasure with Irving. Fans are up in arms. And, of course, there are NBA players, including union President Chris Paul and—the most powerful of them all—LeBron James, who all want to get back to the season.

The players who want to play say they want to use the rest of the season to promote social justice initiatives. And that’s what is most encouraging. No one is saying that they should shut up and dribble. It’s a tactical argument about what would make the greater impact: playing and spreading the message to fans about what needs to be done, or not playing and having the absence of the NBA speak louder than any on-court demonstration in the Orlando bubble ever could.

What is particularly fascinating is that it is not NBA Commissioner Adam Silver or union Executive Director Michele Roberts who are going to make the final decision. Silver has even said, “If a player chooses not to come, it’s not a breach of his contract. We accept that.” This will ultimately come down to what players want and how they feel they can most effectively agitate for change.