Brian Williams, George Floyd’s newphew, lowers his head during a moment of silence at the site of his uncle’s death in Minneapolis. Family and their lawyers gathered outside of Cup Foods on March 12 after announcing a $27 million wrongful death settlement with the City of Minneapolis. (Tim Evans)

Twenty-nine years after the officers who beat Rodney King were acquitted.2

Twenty-one years after the officers who killed Amadou Diallo were acquitted.3

Less than a decade since the officer who killed Michael Brown wasn’t indicted.4

Less than a year since Breonna Taylor’s murderers weren’t indicted.5 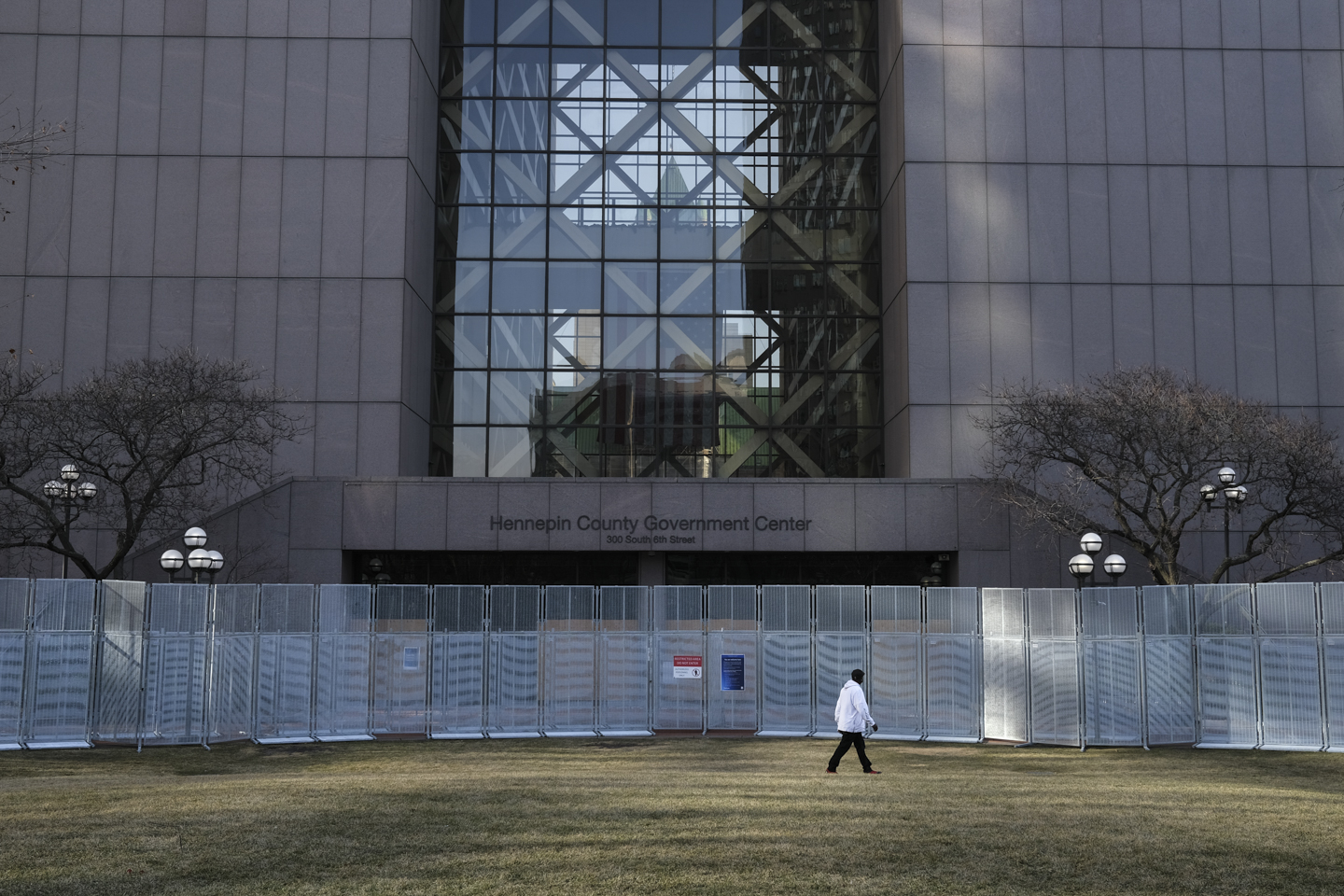 Tall fences were erected around the Hennepin County Government Center and adjacent government buildings in the weeks leading up to Derek Chauvin’s murder trial. The city has spent millions in preventative measures in the event the unrest breaks out should Chauvin be acquitted. March 9, 2021. (Tim Evans) 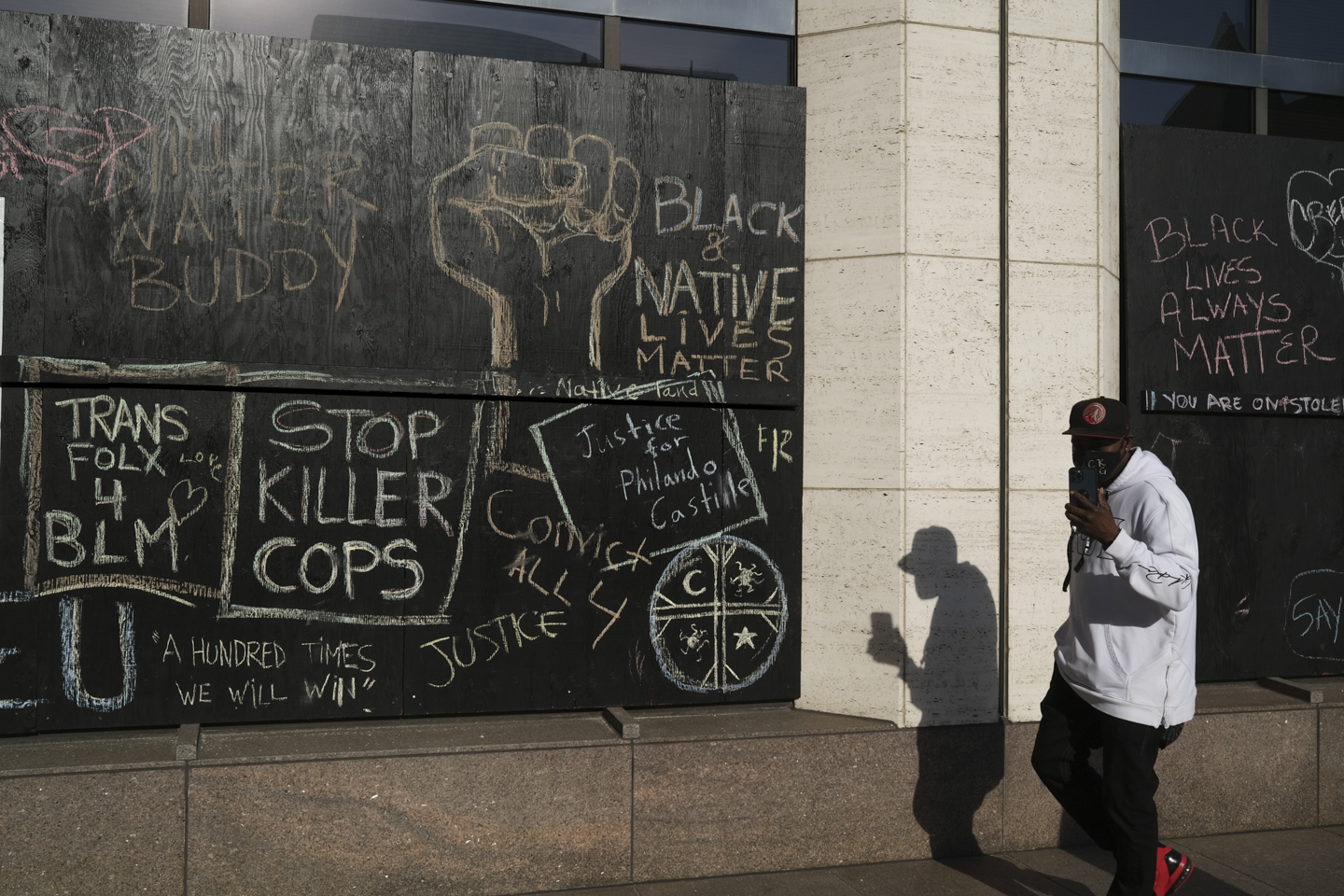 A man walks past chalk protest art across from the Hennepin County Government Center on the second day of the jury selection process for the trial of Derek Chauvin. March 9, 2021. (Tim Evans)

This week, police have been testifying against their own. Chauvin, who knelt on George Floyd’s neck for nearly 10 minutes, is facing murder charges. Numerous officers, including the chief of the Minneapolis Police Department (MPD), have taken the stand against Chauvin to defend their training and policies.6

The day before jury selection began in early March, protesters in Minneapolis held a funeral in the streets. With police barricades as a backdrop, hundreds of people silently marched around the Government Center to honor Floyd and other victims of police violence.7 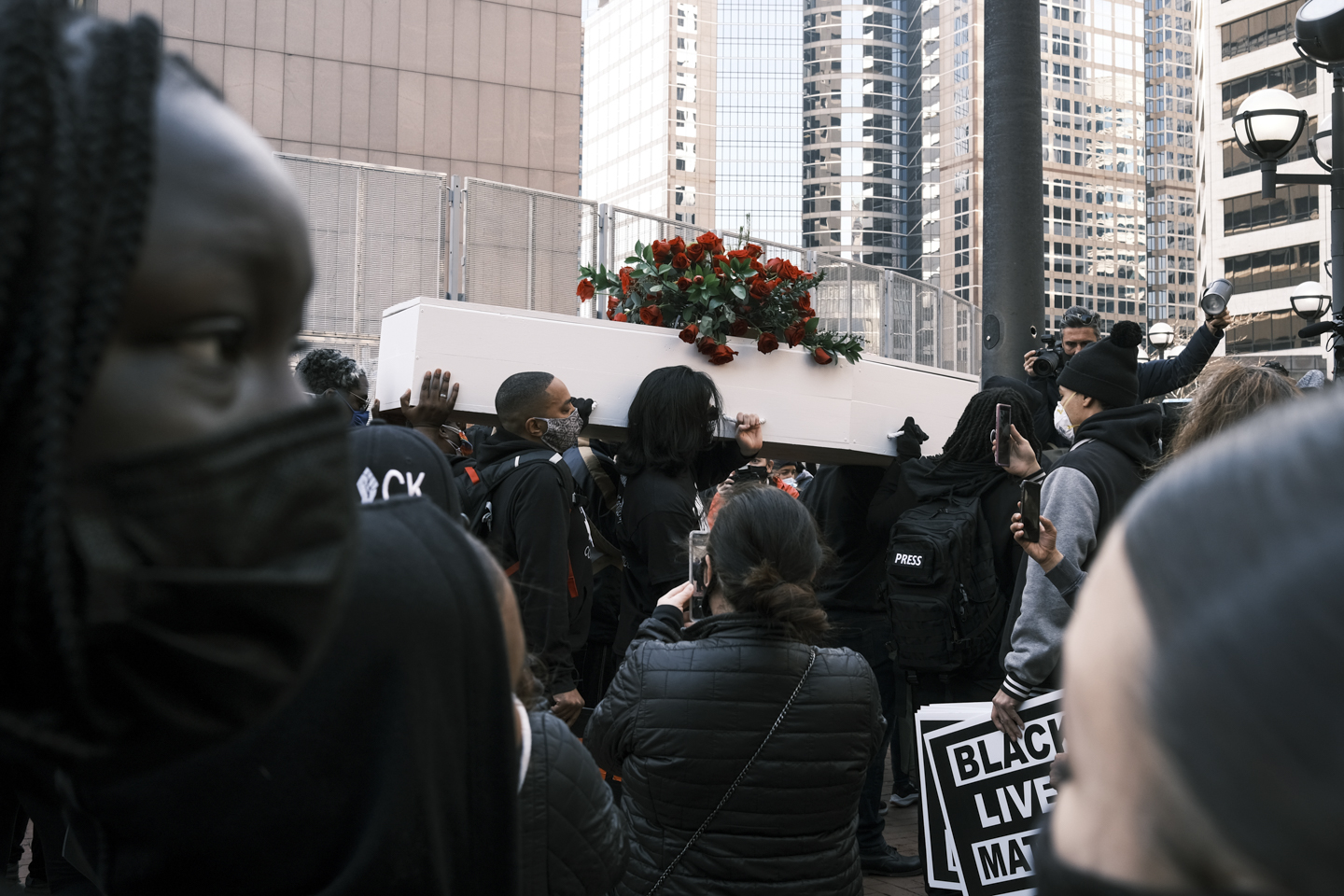 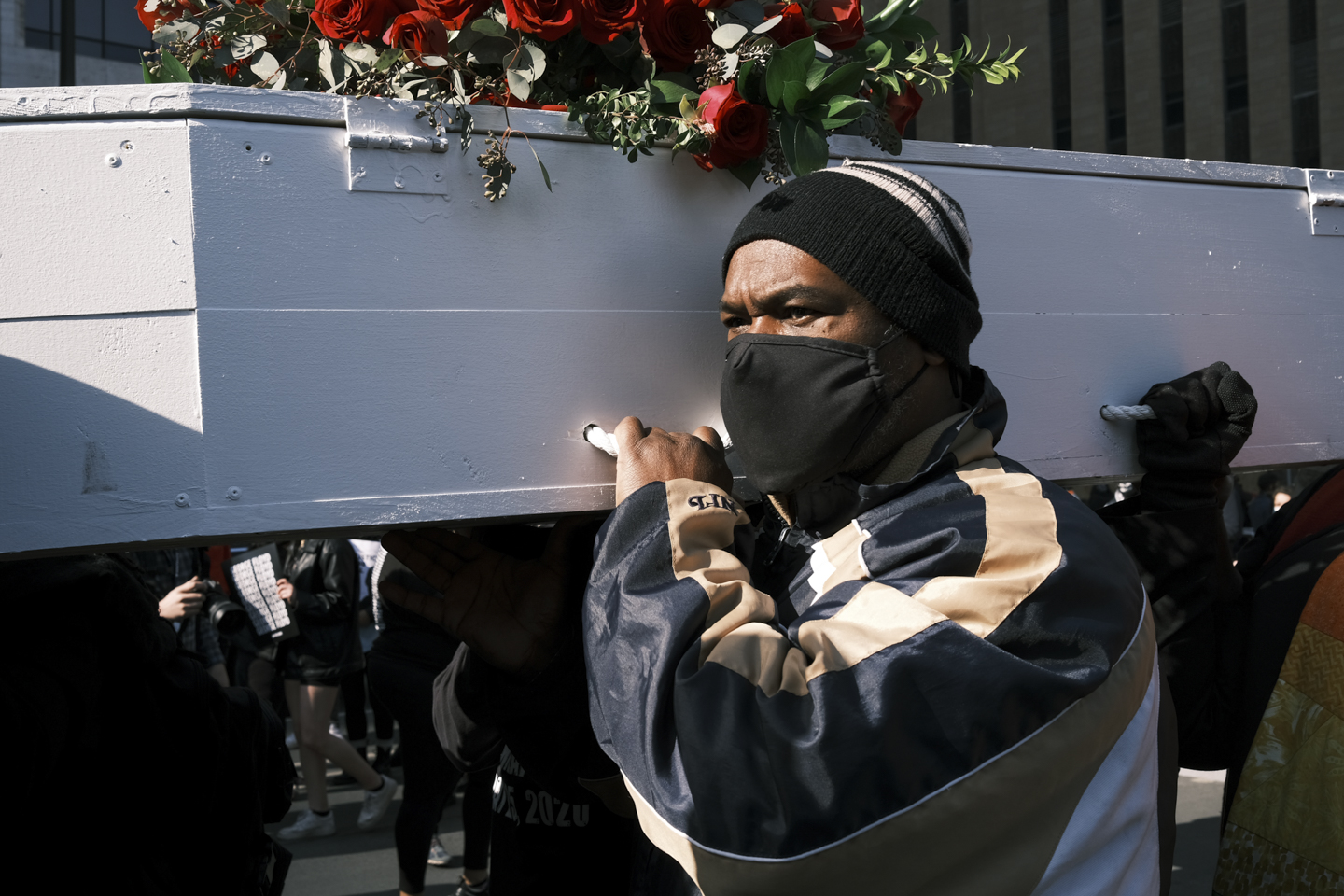 A man joins others in carrying a symbolic casket honoring George Floyd during a march through downtown Minneapolis on the day before the jury selection process started for Derek Chauvin’s murder trial. March 7, 2021. (Tim Evans) 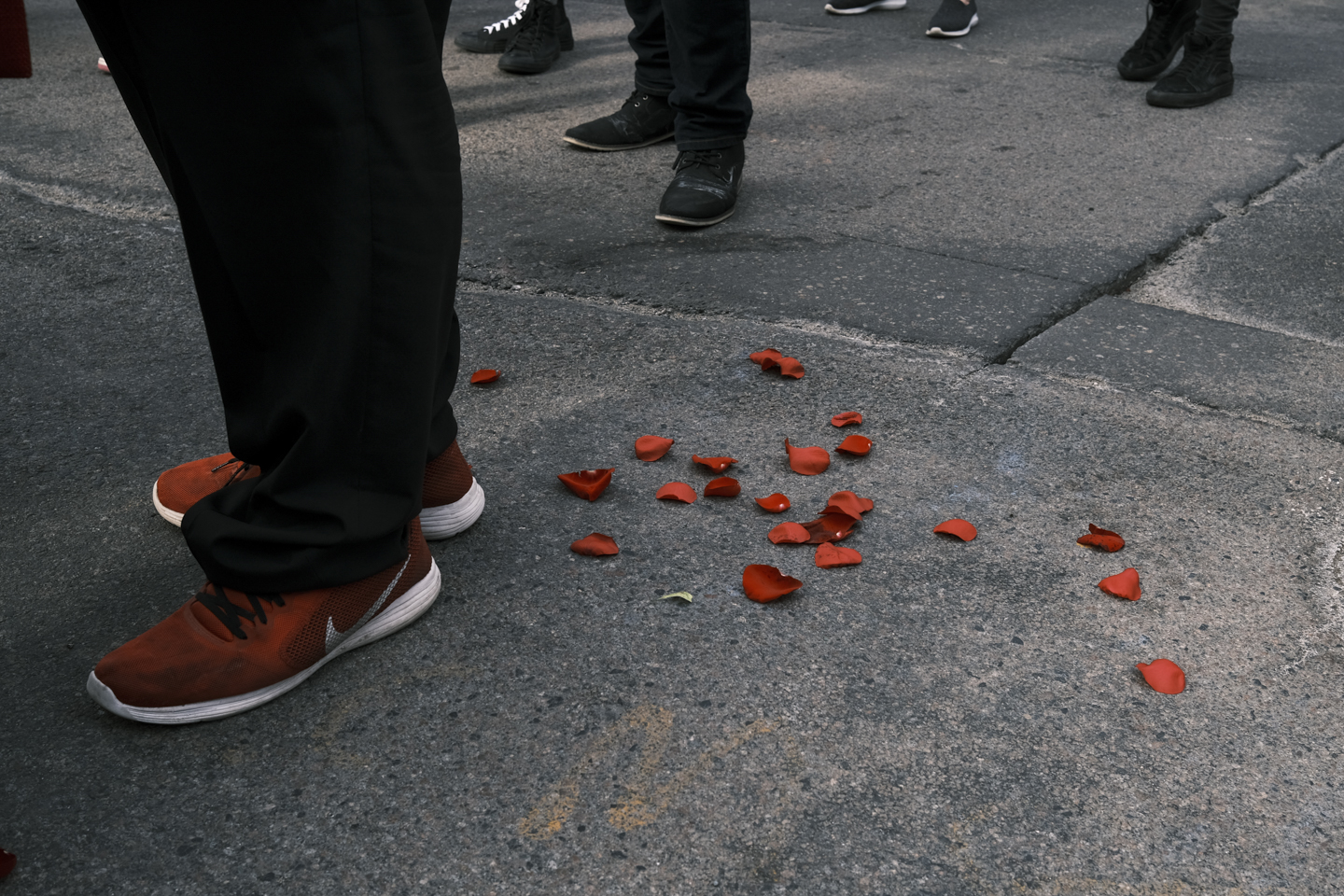 Rose petals lie scattered on the ground after falling off a symbolic casket during a march commemorating the life of George Floyd. (Tim Evans)

Since Floyd was killed last May, there has been a steady drumbeat of protests in Minneapolis—often led by family members of police violence victims. The protests are both calls for justice and rituals of mourning. Parents, partners, and friends share their trauma in the hopes of preventing someone else’s. Time and time again, they recount their loved ones’ last minutes and honor their lives. A eulogy that never ends.8

Outside the Hennepin County Government Center, protesters fixed padlocks to the fencing. On the locks, they’d written the names of police violence victims. George Floyd. Jamar Clark. Justin Teigen. Eric Garner. Police have repeatedly cut down the locks and removed signs from the fence. As of Monday, one of the remaining signs said: how do you spell murderer? mpd.9

Inside the courthouse, the prosecution continues. But the cold language of the law is a far cry from the agony of loss—and grief does not require a verdict.10 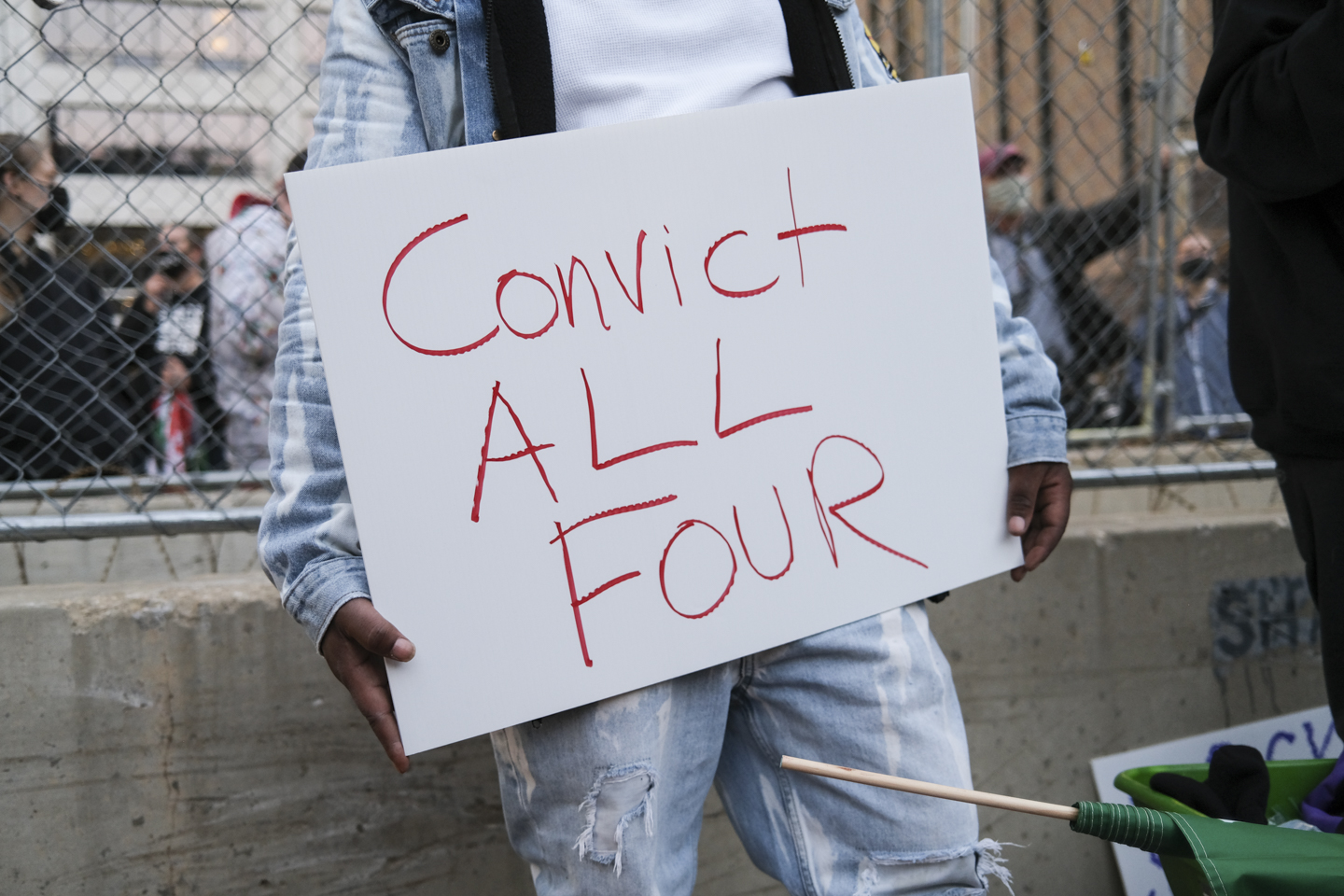 Protesters gather in downtown Minneapolis during the first day of Derek Chauvin’s murder trial on March 29, 2021. Protesters call for not only Chauvin to be convicted but also the three other officer involved in George Floyd’s death, two of whom helped to hold Floyd down and one who kept onlookers at bay while refusing to intervene, to face justice too. (Tim Evans)

Protesters place padlocks on a security fence as part of an activist art installation on the first day of Derek Chauvin’s murder trial. The locks were inscribed with the names of Twin Cities residents murdered by police over the past few decades, including George Floyd. (Tim Evans) 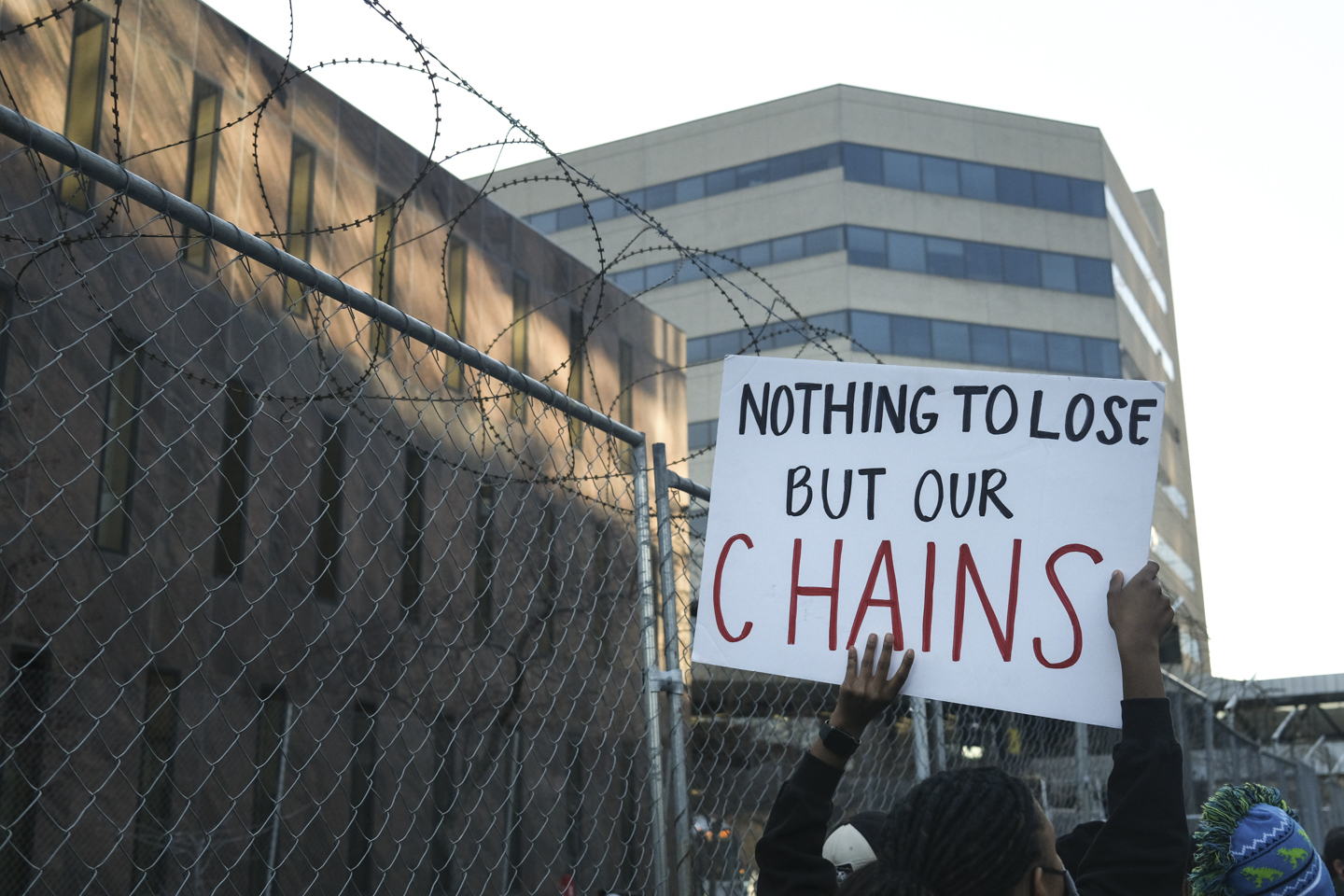 A march through downtown Minneapolis on the first day of proceedings for Derek Chauvin’s murder trial. March 29, 2021. (Tim Evans)