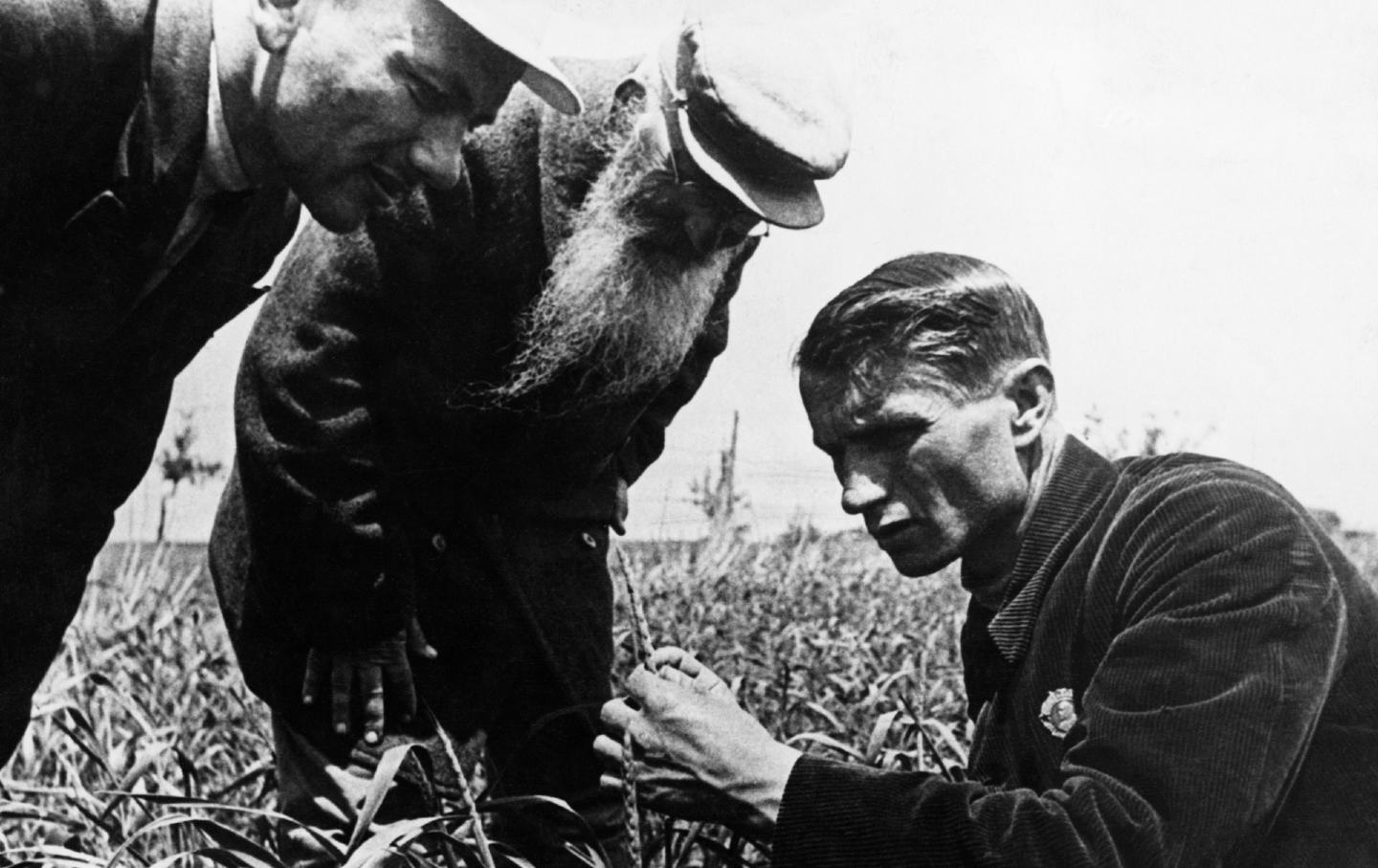 Trofim Lysenko: His refusal to acknowledge scientific fact led to famine and death on an enormous scale. (Hulton-Deutsch Collection / Corbis via Getty Images)

Trofim Lysenko was a Soviet scientist born in 1898. Lysenko didn’t believe in evolution or modern genetics. In a story for The Atlantic in 2017, Sam Kean described how Lysenko believed that the environment “shaped” animals and plants and thought that he could “educate” Soviet crops to germinate at different times of the year by subjecting them to extreme conditions; soaking plants in freezing water was supposed to confer a resistance to cold in future generations. These ideas, as preposterous as growing orange trees in Siberia, caught the attention of a powerful politician, none other than Joseph Stalin himself, who put Lysenko in charge of Soviet agricultural policies. To the millions killed deliberately in the Holodomor—Stalin’s man-made famine in Ukraine—Lysenko added millions more who perished when the imposition of his policies led to widespread crop failure. When bad science meets politicians looking for easy answers, you can get a whole lot of trouble.

Tens of thousands are dead now in the United States. By the time this is all over, several hundred thousand Americans will lie in their graves, felled by a man-made epidemic. Man-made not in the sense of a super-virus created by a mad scientist in a lab but manufactured: perpetuated by policy choices, decisions made by politicians to ignore the best scientific advice offered to them, or to turn to their own Lysenkos, who tell them what they want to hear, no matter the consequences. This week, the White House decided it was time to go after Dr. Anthony Fauci, the director of the National Institute of Allergy and Infectious Diseases, a leading HIV/AIDS researcher, and a figure who has advised six presidents during outbreaks of infectious diseases, including Ebola, SARS, and H1N1 influenza. His crime? Speaking out more bluntly about the risk of Covid-19 in the United States, the failures of our policies thus far, and what new restrictions will likely need to be put in place to address the outbreaks now raging in dozens of states across the country.

What does the president of the United States want to be told? This time it’s not about growing orange trees in Siberia. Our great leader wants to be assured that it’s safe to reopen schools and universities in the fall, that the new outbreaks are due to testing too much, and that a drug the president favors, hydroxychloroquine, works even if the data shows it doesn’t do much good at all—and may even harm some of those who take it. Fauci, who has tried to soothe the president’s ego while not avoiding the facts in front of him, is too much for the president and his handlers to bear. Facts are inconvenient things. If they don’t support your plans and aspirations, well, in 2020, get other facts, other “scientists.” The Republican war on science has been going on for a long time, whether it’s been focused on evolution, HIV prevention, or climate change. Writers like Chris Mooney warned us back in 2005 about this phenomenon and it still continues today. But Donald Trump has taken it all to a higher level and in the midst of a pandemic has surrounded himself with his own Lysenkos, quacks who tell him what he wants to hear, ambitious types who will say anything to get ahead. Some of them may actually believe the nonsense they peddle.

On Tuesday, The New York Times reported that “the Trump administration has ordered hospitals to bypass the Centers for Disease Control and Prevention and send all COVID19 patient information to a central database in Washington beginning on Wednesday.” This, of course, set off alarm bells among scientists and public health experts, and even came as news to the CDC, which hadn’t been informed of the new rules. The mastermind behind the plan to sequester this vital data under the White House’s control? None other than Dr. Deborah Birx, one of Trump’s coronavirus task force members, who has been trying to use the pandemic to consolidate her control over different aspects of the federal health response, and was only last month part of a scheme to overturn the US Agency for International Development’s historic control over responses to emerging global pandemics.

Other careerists in a crisis in the Trump administration have shown a willingness to throw their colleagues under the bus for their own advancement, even if it means sidelining experts like Fauci who have decades of experience in the response to infectious diseases. Dr. Brett Giroir, the assistant HHS secretary who is also Trump’s coronavirus testing czar, told Meet the Press that Fauci “is not 100 percent right” and that he doesn’t necessarily “have the whole national interest in mind.” He then went on to rail against the need for new restrictions and social distancing, even as the epidemic raged across the country. Meanwhile, more than six months into this pandemic, testing shortages still abound across the country. Giroir clearly wants something more to do, but he is already underperforming in his day job of getting US testing efforts in order.

While Birx and Giroir use Covid-19 as a chance for career advancement and want to keep close to the president, sidelining agencies and people who are in his way, they are not the worst of what Donald Trump has brought to bear on Covid-19. Peter Navarro, an economist by training but now more famous for his tirades against China, has emerged as an unhinged conspiracy theorist and champion of the president’s pet interests. Just this past weekend, Navarro baselessly accused China of weaponizing Covid-19, and he is working with Rudy Giuliani and Laura Ingraham to overturn the Food and Drug Administration’s revocation of an emergency use authorization for hydroxychloroquine. Meanwhile, Trump’s education secretary, Betsy DeVos, is threatening states who resist fully reopening schools in the fall, calling the current state of the epidemic in many places “little flare-ups,” and dismissing CDC warnings about the risks of Covid-19 transmission in schools, calling its guidelines “flexible.” And then there is Jared Kushner, the most unqualified man in the White House, supposedly in charge of various aspects of the response to the virus—and succeeding at none of them.

Last but not least among the careerists, conspiracy theorists and yes-men and -women is CDC Director Robert Redfield. Many had significant worries about his initial appointment to the post in 2018. The CDC stumbled out of the gate, with a botched rollout of its first Covid-19 test, but some of its career scientists like Nancy Mesonnier spoke up early, suggesting school closings and other measures as early as February, saying, “We are asking the American public to work with us to prepare for the expectation that this could be bad.” The White House wasn’t pleased with this kind of straight talk, and Redfield and the CDC disappeared for months. In Redfield’s rare public appearances over the past six months, he’s tried to bob and weave through questions—to the consternation of some in Congress. His latest comments on the resurgence of Covid-19 in the South go full-bore bananas, suggesting—without evidence—that it wasn’t states’ reopening too early and broadly that caused the steep rise in new cases but Northerners’ taking trips to all these states for Memorial Day. Yes, folks this is where we are. This is the man supposedly in charge of disease control and prevention in these United States.

We need real scientific and public health leadership to get us through this pandemic. Instead, we’ve got a rogues’ gallery of those who see the pandemic as a career move, spew outright lies about the virus and how to manage it, and have no qualifications for the portfolios they’ve been given under Trump’s instruction—and those who can’t speak forthrightly about the facts with the specter of the president hovering in judgment over them. The attention on Fauci this week has obscured a simple but terrifying fact: There may be no one left in the inner circle of decision-making on this pandemic who has the faintest idea how to lead us out of the darkness that lies ahead.