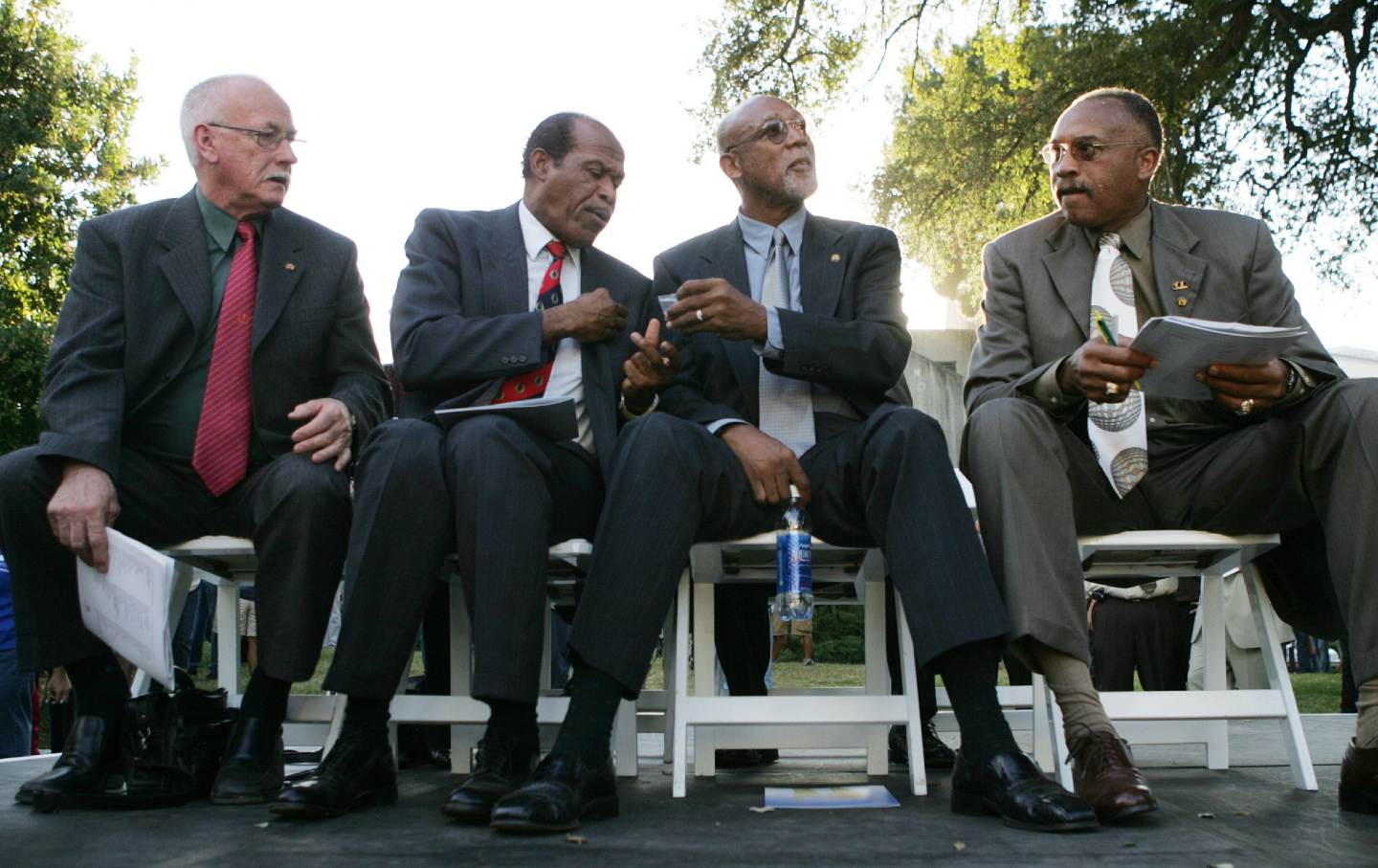 Peter Norman, Lee Evans, John Carlos, and Tommie Smith waiting for an unveiling ceremony of a statue to honor the medal ceremony protest at the 1968 Olympics. (Jim Gensheimer / Getty Images)

Lee Evans was world-class, on the track and off, with an emphasis on the word “world.” The onetime record holder in the 400-meters passed away this week at the age of 74 in Nigeria, where he had coached on and off for decades. It was in 1968 at the Olympics in Mexico City that, at the tender age of 21, Evans ran a scorching 400 meters in 43.86 seconds, a world record that stood for 20 years. His second gold at those games came anchoring the United States team in the 1,600-meter relay, which the team ran in a mind-boggling two minutes and 56.16 seconds, a record that lasted for a remarkable 24 years.

He was a Hall of Fame runner, but that’s not solely why he needs to be remembered. Evans was more than someone who could burn up a track. Before those 1968 games, he was a political organizer with the Olympic Project for Human Rights, the organization of people like Tommie Smith and John Carlos, spearheaded by professor/sociologist Dr. Harry Edwards. OPHR aimed to organize a Black boycott of the 1968 Olympics to protest racism and injustice both inside and outside the Games. The boycott was meant to be a declaration of human rights amidst a world that in 1968 was being roiled by the US war in Vietnam and resistance to racism across the globe.

The boycott was unsuccessful, so runners like Smith, Carlos, and Evans decided they would take their protest to the Games themselves. We know what Carlos and Smith did at the Olympics. But rather forgotten is the moment when Evans, along with 400-meter silver medalist Larry James and bronze medalist Ron Freeman took to the medal stand wearing black berets, the signifier of the newly formed Black Panther Party for self-defense. Evans almost didn’t run the race. He considered his own personal boycott after Carlos and Smith were expelled from the Olympic village for raising their fists. But it was Carlos who told him that the best revenge would be to go out to the track and showcase his excellence. After the race, Evans was deluged with death threats, but he also was critiqued by those who thought he should have done an even more radical demonstration. I interviewed Evans in 2004 and he said, “I had a tough time because Black people thought that I didn’t do enough and the whites were just mad. I got it from both sides. The Black people thought I should have done nothing less than dynamite the victory stand. That’s the only thing that would have satisfied them because after Tommy and John. What else could I do?”

What Lee Evans could do was then lead an immensely rich life in which he combined his passions for the track and internationalist politics in coaching around the world, from the Middle East, to the University of South Alabama to across the African continent, most centrally in Nigeria. Evans even coached the Nigerian team to a bronze medal at the 1984 Olympics in Los Angeles. As he told me, “As soon as I learned about what Jim Crow meant and I found out that my ancestors were Africans, I wanted to go back to Africa. So that’s what I did. I went back to Africa in 1975 and I worked there for about 20 years and I was fortunate to coach three Olympic medal winners on Nigeria’s team.”

I reached out to Ron Davis, a lifelong friend of Lee Evans and a renowned track coach in his own right. Ron e-mailed the following:

“Lee was offered a lot of money to visit South Africa during the time Apartheid was going on but refused to go. Lee and John Carlos organized athletes to prevent Rhodesia from participating in the 1972 Olympic Games. Lee and I stood proudly when the Nigeria National Anthem was played and had conversations about how meaningful it was to us; more so than the [United States] National Anthem. We were also highly respected as National Athletics Coaches at a time it was a struggle for Afro American/African coaches to be selected on USA Olympic Teams or get Head Coaching positions at major universities. Lee’s presence around the world helped promote track and field because he always took the time to ‘give’ and not expect anything in return. My brother and my best friend will be sincerely missed.”

Evans is going to be buried in Nigeria. He was a track and field icon before he was 22 and someone who devoted decades of his life to coaching others. But perhaps most significantly for this current generation of athlete-athletes, he was an organizer and he was brave. He was an organizer: someone who put in the work to try to organize athletes to fight for social justice, in meetings large and small. He was brave: someone who, in the face of possibly suspension or far worse, took his protest to the medal stand.

In a year when the International Olympic Committee has pledged to crack down on athletes who sport the phrase “Black Lives Matter” on their clothes or make any kind of a demonstration, his life is a reminder that any athlete considering protest in the face of these dictates stands on the shoulders of giants. Evans was a giant, and now he is to be buried in Nigeria, returned to his ancestors. For eternity, Lee Evans is finally home.