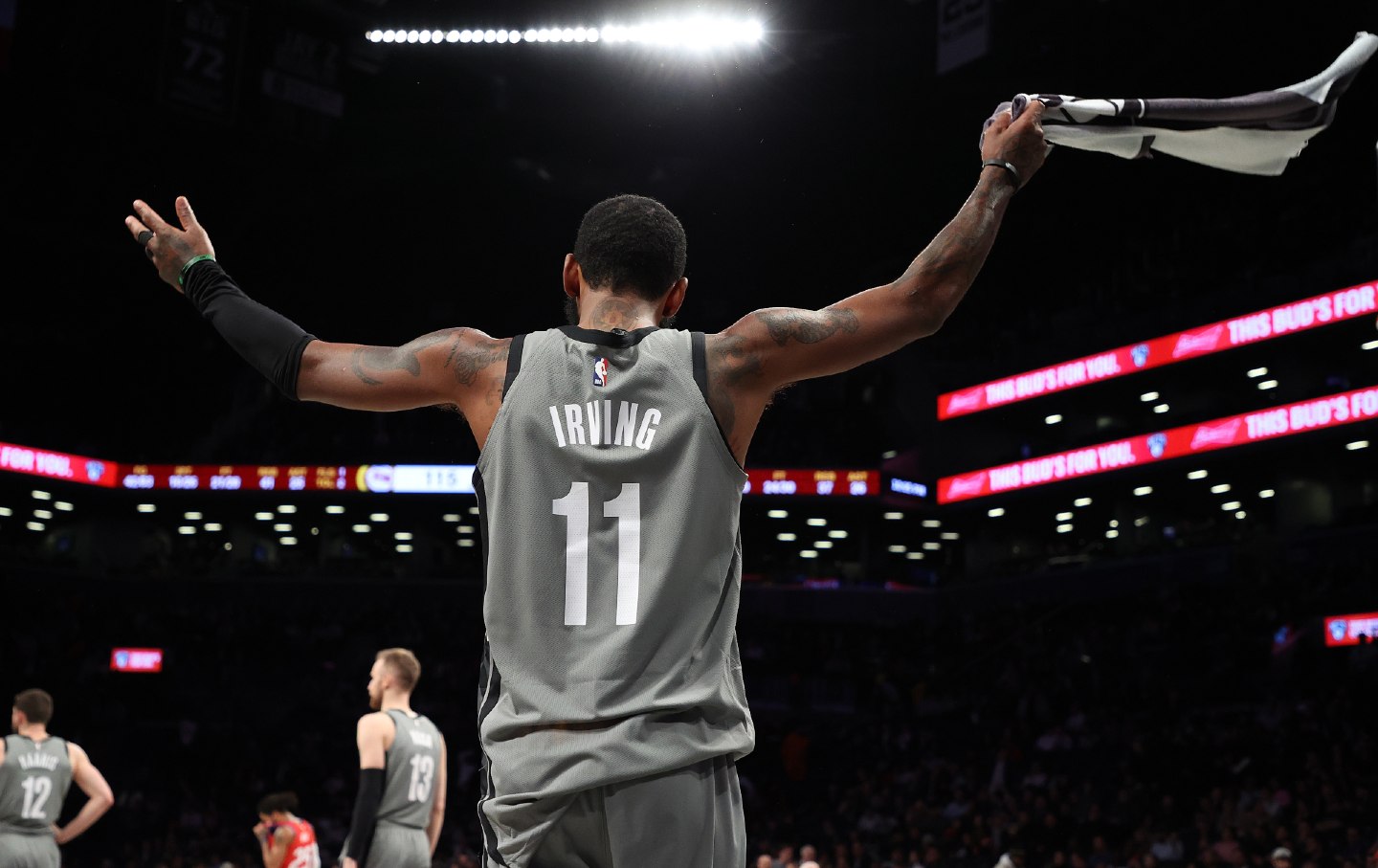 Kyrie Irving celebrates a win against the Detroit Pistons during their game at Barclays Center on January 29, 2020. (Al Bello / Getty Images)

There is an old expression from revolutionary Rosa Luxemburg: “Those who do not move, do not notice their chains.” This quote rattles in the back of my mind as NBA commentators and fans rage against Brooklyn Nets guard Kyrie Irving. He is choosing to move, and by doing so, revealing the realities of restraints.

The iconoclastic Irving has taken “a pause” from playing for reasons clearly related to mental wellness and family. As Irving told the press (members of which he referred to as “pawns” before the start of the season, which didn’t exactly win him adherents), he “had a lot of family and personal stuff going on. So, just want to leave it at that.” In other words, it’s his own damn business. As Tom Ziller wrote astutely, “It seems very weird to effusively praise athletes when they can compartmentalize difficult off-court situations but then criticize them when they, like Kyrie has, step away to take care of those situations and themselves.”

Irving has been fined $50,000 for attending a family birthday party unmasked during his absence and over $800,000 in game checks. But the story could not simply end with that. The media was furious with Irving for stepping away, most repellently longtime NBA journalist Jackie MacMullan, who said that Kyrie is the “property” of the NBA’s franchise owners and that he needs to learn that reality. As Carron Phillips wrote for Deadspin, “Even after everything that’s happened in the era of Trump, the events of 2020, and what’s already taken place this year, MacMullan’s mentality is yet another example of how so many in White America look at Black athletes solely as entertainment, as property. They aren’t people, just tools that help them escape from the realities of their lives and racism.”

MacMullan is certainly not alone with her disdain for Irving. He seems to get under the skin of media and fan haters more than any other basketball player in memory, and it is not difficult to understand why. It’s because, in his own way and on his own terms, Kyrie is truly free. He is a genius with a basketball, but he also could leave basketball. He loves the game, but clearly doesn’t need it. And that makes him a threat. It also exposes a great deal of the empty rhetoric that the NBA likes to espouse.

The NBA likes to bleat that this is a league defined by “player empowerment” and a social conscience, yet clearly that goes only so far. Irving’s very existence exposes just how thin these maxims are. It was Irving who agitated among other NBA players to not play in the bubble in 2020, because he—and other players—believed that resuming the season would distract the country from the protests that raged after the police murder of George Floyd. (It was just revealed that Irving has secretly bought the family of Floyd a house.) It was Irving who, to the anger of the scolds, appeared silently on a Zoom call of dozens of people for progressive Manhattan DA candidate Tahanie Aboushi under the name “Kai Irving.” It was Irving who has trolled the media by saying that he was a flat-earther, and then watched with a grin as people lost their minds. And this is the Kyrie who has left teams because he didn’t want to play there, seeking out a comfortable place, which it looks like he has finally found in Brooklyn.

Watching Kyrie is to be reminded of the phrase of Muhammad Ali, “I don’t have to be what you want me to be.” Kyrie is his own person, and that is still too much for those who are part of this league of alleged “player empowerment.” James Baldwin once said America was “devoted to the death of the paradox.” It is that paradox of Kyrie Irving—that he is both athlete and thinker, that he is a basketball savant but does not let basketball define him—that people simply cannot abide. His very existence exposes the empty homilies from the league about wanting players to “use their platform.” He is himself, unmistakably, a free Black man, and that seems to be his greatest sin of all.