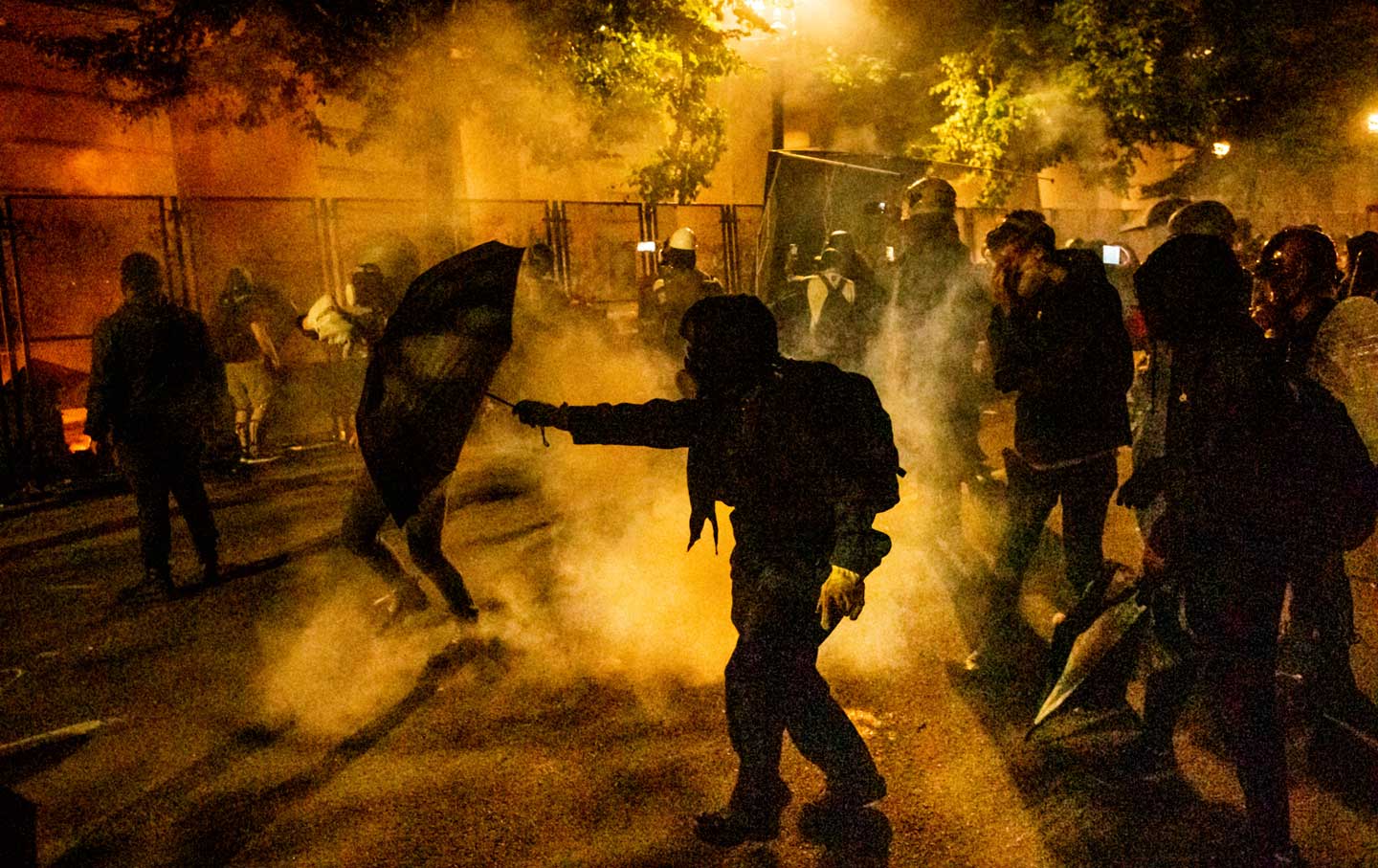 President Trump is naming more and more cities to which his administration may deploy federal agents in order to stop protests against police violence and structural racism. Even as Oregon Attorney General Ellen Rosenblum is now suing federal officials, alleging that agents who were dispatched to Portland have rounded up people “without warning or explanation, without a warrant, and without providing any way to determine who is directing this action,” the president says agents deployed to that city have been doing “a fantastic job.” And Trump adds that he is “going to do something” in “New York and Chicago and Philadelphia and Detroit and Baltimore and all of these [cities] run by liberal Democrats.”

The presidential threat has stirred an outcry, with mayors and other local officials across the country echoing the message of Portland Mayor Ted Wheeler, who was teargassed Wednesday night when he joined protesters on the streets. “Their presence is neither wanted nor is it helpful, and we’re asking them to leave,” Wheeler said of the feds. “In fact, we’re demanding that they leave.”

Philadelphia Mayor Jim Kenney complains, “To send federal agents to police U.S. cities that have not requested such aid can only impede the work of local governments and exacerbate already heightened tensions in these cities. And to target cities that are led by Democratic mayors is clearly a politicization of federal resources that should outrage all taxpayers.”

“While the City of Philadelphia has not received any formal notification that federal agents will be sent here,” the mayor said on Tuesday, ”we would use all available means to resist such a wrong-headed effort and abuse of power.”

Philadelphia District Attorney Larry Krasner is boldly spelling out his view of what form the resistance might take.

“My dad volunteered and served in World War II to fight fascism, like most of my uncles, so we would not have an American president brutalizing and kidnapping Americans for exercising their constitutional rights and trying to make America a better place, which is what patriots do,” Krasner announced Tuesday. “Anyone, including federal law enforcement, who unlawfully assaults and kidnaps people will face criminal charges from my office.”

Krasner, a Democrat and one of the most progressive local prosecutors in the country, made the point even more bluntly in an interview with Bloomberg CityLab, where he explained:

It is not OK to fracture skulls with what they like to call non-lethal rubber bullets or tear gas canisters. It is not OK when there is no probable cause to jump out of a rental van and just requisition people off the street. That looks like a dictatorship. That looks like a kidnapping. That looks like a crime. So there’s nothing unusual about federal law enforcement doing law enforcement work, where it may follow the law and where they have jurisdiction to do so. That’s not what we’re dealing with here, though. We’re dealing with a shiny object that the president is waving around to distract from his outrageous failures in many other areas. And to try to use his usual tactics of neo-fascist division, hate, and racism to improve his almost deceased campaign.

Krasner is not alone in talking about official responses to Trump’s scheming to send federal forces into cities that do not want them. Senator Ron Wyden of Oregon has decried “the Trump administration’s unconstitutional occupation of Portland,” arguing that “Donald Trump is inciting violence on the streets of my hometown.” With Senator Jeff Merkley of Oregon, he is proposing legislation to force Trump “to remove these unwanted forces from our city.”

Wyden is not stopping there. Noting that tactical units from the Department of Homeland Security’s Customs and Border Protection section have been deployed to Portland, he is arguing that “limiting the authority of federal agents at DHS is sorely needed as well.” In a op-ed for NBC, Wyden wrote:

I’d remind anyone participating in this shameful occupation of an American city that they cannot hide behind Donald Trump forever. The willingness of officials to participate in such a flagrant abuse of power exposes a rot that goes deep into the agency, and that rot must be removed.

To start, any official who signed off on this unconstitutional operation will be identified and held legally responsible. The militarization of DHS must be ended. And the absurd expansion of authority must be reversed. Our border and customs agencies must and will be restricted to securing the border and stopping smuggling, while more appropriate agencies handle refugees, asylum-seekers and others seeking help.

But it is Krasner’s response that has inspired headlines and heated debates. Progressives have applauded him. Trump defenders have rushed to condemn him—and yet Philadelphia’s district attorney has not wavered. As Trump ramps up the rhetoric, Krasner calmly explains that he will stand up for the rule of law.

“The Philadelphia police department and the Philadelphia D.A.’s office, absolutely have jurisdiction to arrest and to charge federal law enforcement officials if they commit crimes,” says the prosecutor. “The only wrinkle to this is that under certain circumstances the case may eventually end up being handled in federal court. But there’s no question that the law applies to the feds, including the president, whatever he may want to say otherwise.”