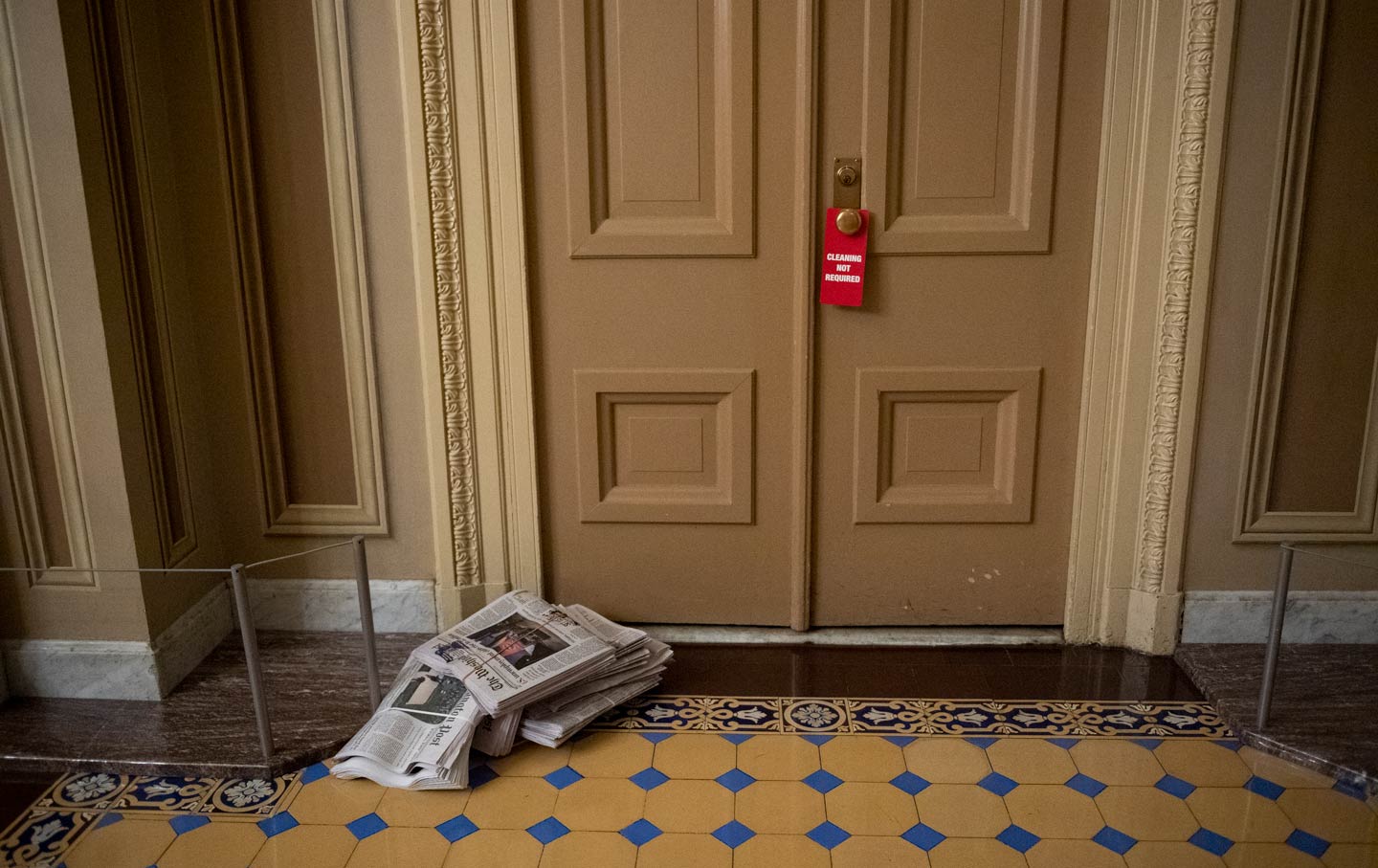 Newspapers outside an office door in the US Capitol on Monday, April 20, 2020. (Caroline Brehman / CQ-Roll Call via Getty Images)

There is no freedom of the press without the press. And the press is threatened, as never before, by the coronavirus pandemic.

Already struggling before the virus hit and the economy shut down, local media has been rocked so hard over the past two months that the Poynter Institute for Media Studies reports, “It’s getting hard to keep track of the bad news about the news right now.” The research arm of the journalism group has been trying, however—maintaining an ever-expanding list of the thousands of journalism jobs that have been lost or diminished in a wave of closings, cutbacks, layoffs, firings, furloughs, and general downsizing that has gutted print, digital, and broadcast newsrooms. According to a New York Times survey, roughly 36,000 media workers in the United States have been laid off, furloughed, or seen their pay reduced. “Hunger for news in a time of crisis has sent droves of readers to many publications,” explained Times. “But with businesses paused or closed—and no longer willing or able to pay for advertisements—a crucial part of the industry’s support system has cracked.”

Journalism cannot survive, and certainly not thrive, without resources. And those resources are not coming from a “free market” that has stalled out. There has to be a federal fix, and that means that Congress must include muscular support for journalism in stimulus measures.

“Local media is a critical source of news and information for communities, holds our government accountable, and plays an important role in our civic engagement,” argues former member of the Federal Communications Commission Michael Copps, who now counsels Common Cause on media issues. “But the health crisis our nation faces combined with the long-term decline in local news has left many communities without adequate sources of trustworthy news on the pandemic and has created a void in civic information. Congress must act now to ensure local news is adequately funded in order to meet the information needs of communities.”

More and more members of Congress agree. “As in many of our nation’s most challenging times, the public turns to free and local media for life-saving information and breaking news, because local radio, television and newspapers are still the most trusted sources in times of emergency and disaster,” 240 House members wrote in a bipartisan letter sent last month to the Trump administration. “We urge you work with us in ensuring that local media can continue to inform communities, even as these outlets face unprecedented economic distress.”

Senator Sherrod Brown joined 18 other senators in signing an April 8 letter asking “that any future coronavirus stimulus package contain funding to support local journalism and media.” Without this support, the senators wrote, “communities across the country risk losing one of their key sources of accurate information about what citizens need to know and do in response to the COVID-19 pandemic.”

The key, explained Brown when I spoke to him recently, is an understanding of the need to shore up local media. One-size-fits-all reports from New York or Washington are insufficient in a crisis where, the senator says, people need “the most up-to-date information on what resources are available in their communities as well as how to stay safe and protect their neighbors.”

The federal government has a long history of providing support for diverse and independent local media, going back to the founding days of the republic—a subject Robert W. McChesney and I explored at length in our 2010 book, The Death and Life of American Journalism: The Media Revolution That Will Begin the World Again. But the current crisis is so extreme and coming on so rapidly that it requires immediate attention that draws on existing proposals for sustaining journalism, as well as new ones.

Free Press Action, the media reform group with which McChesney and I have long been associated, has come up with a plan that pulls together a host of immediate and longer-term policy recommendations that, if adopted by Congress, could go a long way toward saving local journalism. It would, as well, preserve and extend employment for tens of thousands of reporters during the current crisis and in the future. Two things distinguish Free Press Action’s recommendations. First, they focus on sustaining journalism, rather than bailouts for the big media companies—and hedge-fund investors—that were making a mess of things even before the pandemic hit. Second, they bring realism and precision to a discussion that to this point has lacked clarity. 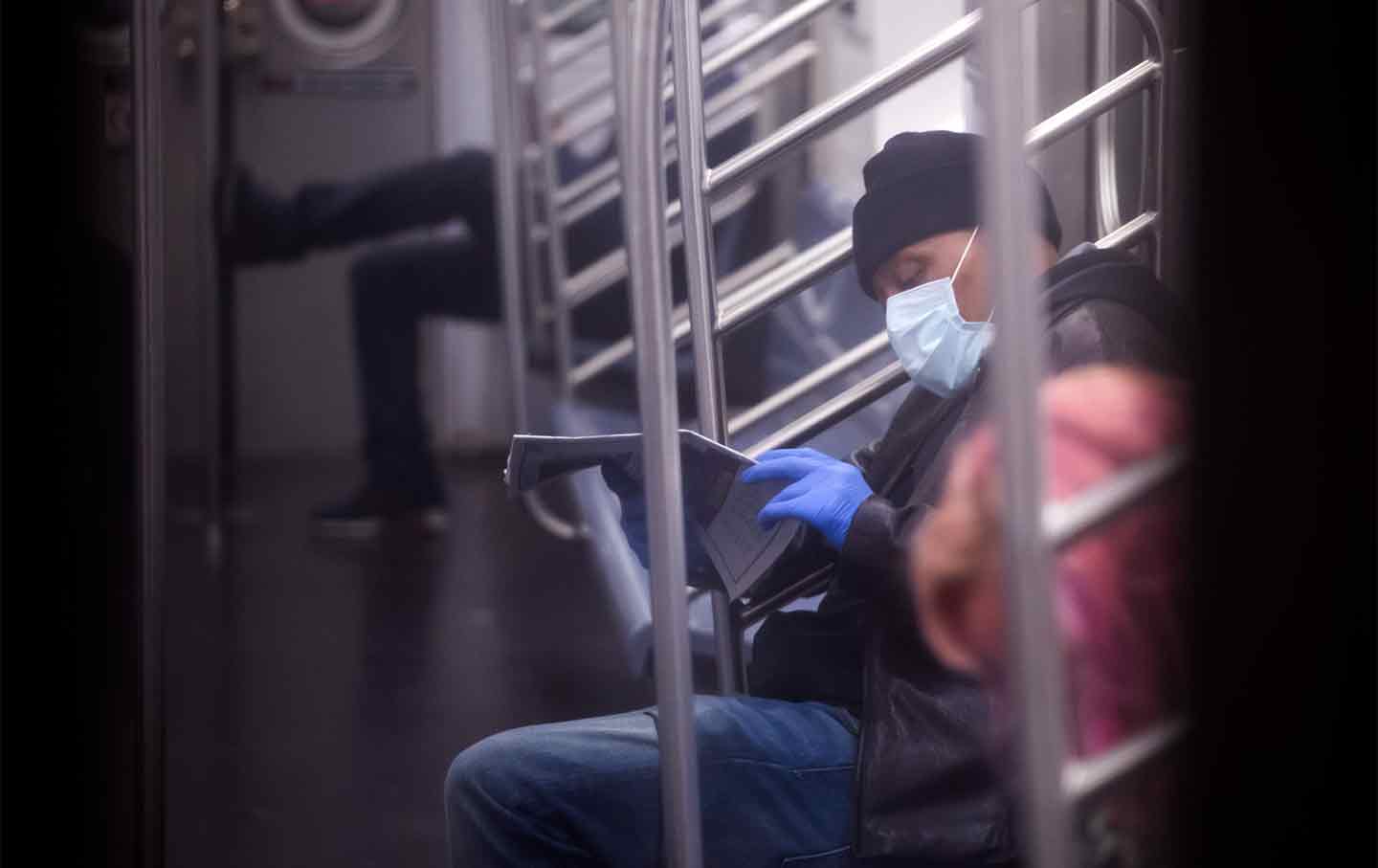 “To get through this emergency,” asserts Craig Aaron, who is president of Free Press and Free Press Action, “we need trustworthy news and reporters on the beat. Wishful thinking about new business models or philanthropy won’t be enough.”

In order to build “a bridge from this emergency period to a future of sustainable journalism that serves and represents local communities, especially Black and Latinx communities that have been disproportionately harmed by the current crisis and poorly served by dominant media,” the group’s recommendations emphasize “keeping communities informed, and…protecting and promoting newsrooms and reporting jobs—not broadcasters, newspaper companies or any single industry.”

At the heart of “What a Journalism-Recovery Package Should Look Like During the COVID-19 Crisis,” the agenda being advanced by Free Press Action, is a proposal for direct emergency payments “to keep reporters at their desks and on the beat.” Any newsroom publishing local news could qualify for the plan, which would:

● Provide approximately $1.5 billion in Emergency Stabilization Grants to local-news organizations at $50,000 per newsroom position (reporters, editors, producers, etc.) at eligible outlets. This would cover 30,000 newsroom jobs.
● Direct this money toward newsroom workers: The funds must be devoted to employees and to maintaining payroll and benefits. Any local-news company could be eligible, but recipients must spend the money locally, direct the money to newsroom jobs, and be prohibited from using funds for the purchase of securities, dividend payments, executive compensation, debt service, mergers and acquisitions, etc.
● Distribute these funds via the Corporation for Public Broadcasting (CPB), expanding its mission and giving it the authority to do so.
● Establish accountability and transparency measures to track how the money is spent and to build firewalls to prevent the government from interfering in content production or impeding First Amendment activities.

The Free Press Action plan also recommends news-outlet tax credits to retain and boost the number of newsroom jobs, increased public-media funding, accelerated federal ad buying, as suggested by the House members in their letter, and “a First Amendment Fund, which could be sustained by levying a small tax on targeted online-advertising revenues in the United States.”

In addition, the group wants to help sustain journalism with increased funding for libraries to purchase digital subscriptions, tax credits for individual paid subscriptions to news outlets, a national moratorium on media mergers, a plan to forgive student loans for working journalists, and a proposals to use the AmeriCorps model to keep reporters and editors in newsrooms.

These are concrete steps that recognize the reality that, as Nora Benavidez, PEN America’s director of US free expression, explained several weeks ago, “local news is not a luxury, it is a public good.”

Is Performative Progress the Best Democrats Can Do On Voting Rights?