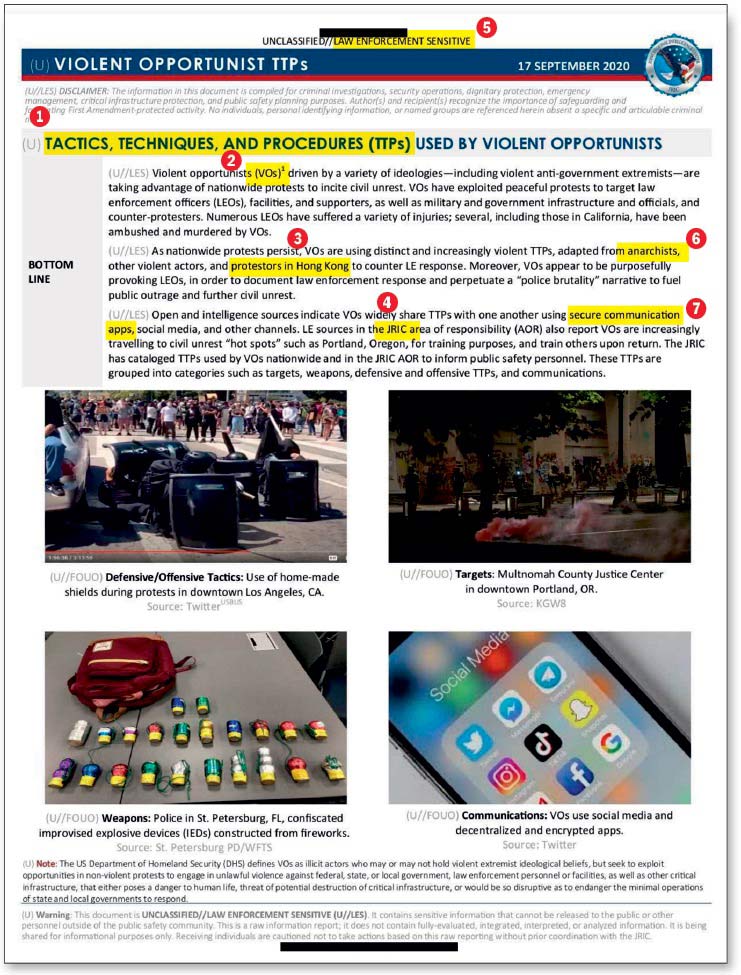 A concerned law enforcement source provided The Nation with this Department of Homeland Security intelligence report about alleged violent threats asso­ciated with this summer’s protests against police brutality and mass incarceration. Its use of counter­terrorism terminology shows the DHS’s tendency to see terrorism threats where they may not exist.

❶ “TTPs” (tactics, techniques, and procedures) This term is common in counter­terrorism and refers to patterns of behavior characteristic of certain terrorist groups. Use of a term associated with terrorism so prominently in this document is noteworthy, since many suspects, as it points out, may not even hold violent extremist beliefs.

❷ “VOs” (violent opportunists) This document later states that the DHS defines VOs as “illicit actors who may or may not hold violent extremist ideological beliefs, but seek to exploit opportunities in non-violent protests to engage in un­lawful violence.”

❸ “protestors in Hong Kong” Since 2019, Hong Kong residents have demonstrated against mainland China’s attempts to impose its extradition laws on them. US law enforcement often looks for foreign ties in domestic protest movements, which allows them to take greater liberties in surveillance.

❹ “JRIC” (Joint Regional Intelligence Center) One of the many fusion centers established by the Department of Homeland Security after 9/11 to respond to terrorism threats. Fusion centers are designed to facilitate intelligence sharing between federal agencies and local law enforcement.

❻ “anarchists” Term often used by law enforcement as synonymous with “antifa” (short for “anti-fascist”). President Trump vowed this summer to formally designate antifa a terrorist group, which would allow for far more intrusive forms of surveillance commonly employed against foreign terrorist groups like ISIS. His FBI director, however, has asserted that antifa is not a formal group but an ideology.

❼ “secure communication apps” Apps that use encryption to enhance the privacy of the user’s correspondence. Federal law enforcement agencies like the FBI have inveighed against the increasingly widespread use of such apps and their effect on thwarting surveillance—a phenomenon it calls “going dark.”