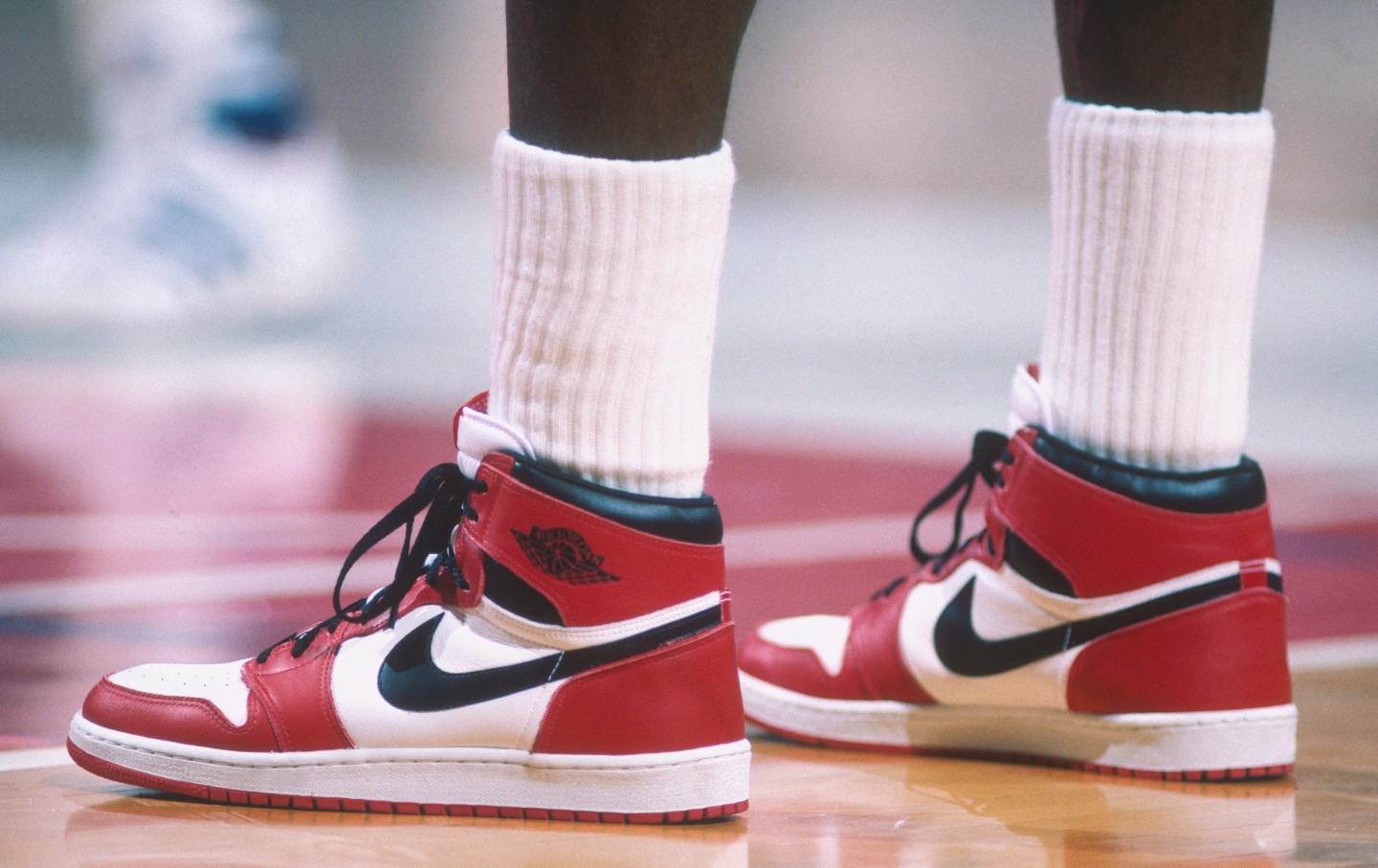 The “Air Jordan” Nike shoes worn by Chicago Bulls’ Michael Jordan during a game in Washington, D.C., circa 1985. (Focus on Sport / Getty)

Six episodes down, four to go. Over halfway through ESPN’s 10-part documentary, The Last Dance, it is safe to say that we know what we are getting. Entertaining as it is, it’s less a documentary about the 1990s Chicago Bulls than it is an exercise in brand management for current NBA franchise owner Michael Jordan.

This was manifestly the case in Episodes 1 and 2, which were pure Jordan hagiographies. Episodes 3 and 4 were more interesting, as they branched out to speak about Jordan’s teammates Scottie Pippen and Dennis Rodman. With Episodes 5 and 6, we were back to the billion-dollar project of Jordan brand extension that still aims to conquer, and reconquer, the world.

Episode 5 is particularly illuminating, and in many respects, it gives the game away. We finally get to grapple with Jordan’s lack of political involvement—in particular, his infamous statement in 1990 that he wouldn’t stick his neck out politically because “Republicans buy sneakers too.” Those words were an off-the-cuff response when he was asked why he wouldn’t endorse Charlotte, N.C., Mayor Harvey Gantt in his senatorial challenge to the segregationist bigot Jesse Helms.

This throwaway quote has been used as a cudgel against Jordan ever since. His critics have compared him unfavorably with everyone from Muhammad Ali to LeBron James. They’ve said that when push came to shove, Jordan chose his bank account over any kind of political solidarity, Nike over anti-racist political action. It’s done enough damage to the Jordan brand that in recent years his handlers have begun to deny that he ever said it, claiming that it’s essentially an urban myth. After all, it’s not on video or audiotape. Who’s to say he said it at all? 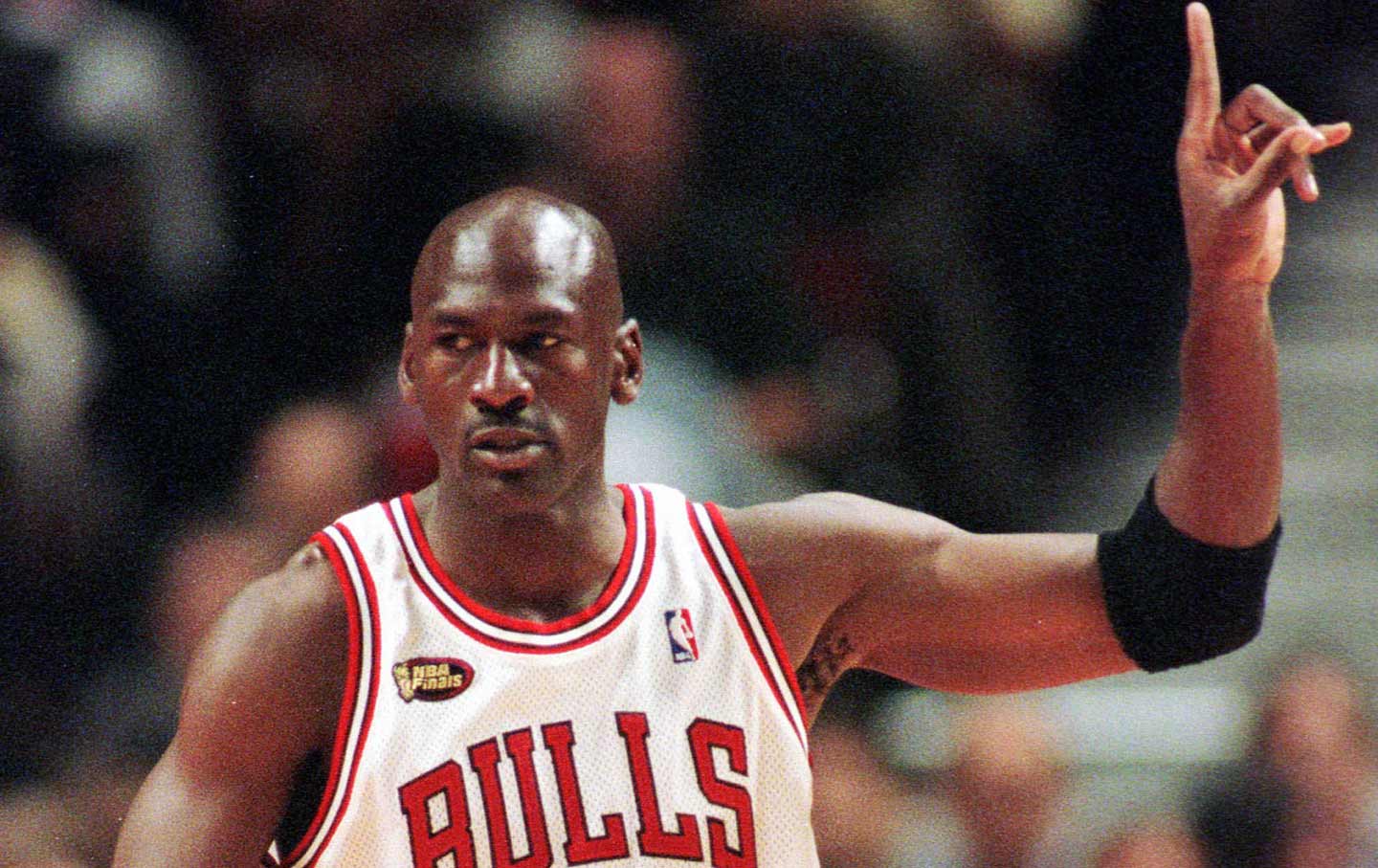 But in Episode 5, we see the ruthless competitor side of 2020 Michael Jordan when he’s confronted with this quote. He didn’t hide behind the notion that he never said it. He didn’t express regret about the decision to pass on taking a stand. Instead, he justified his words by saying, “The way I go out of my life, I set examples. If it inspires you, great. If it doesn’t, then maybe I’m not the person you should be following.” It was a big middle finger to everyone who wanted Jordan to use his global platform and be something more than what he was.

Some are praising the documentary for showing this side of Jordan, but that’s nonsense. This is a Michael Jordan production. This is the Jordan that Michael Jordan wants us to see: a ruthless competitor, always with a score to settle. He lives to win, whether at hoops, cards, or throwing quarters against the wall. Whether the stakes are thousands of dollars or one buck a hand, he is about the win and “putting your money into [his] pocket.”

Jordan was also, as the documentary shows, single-mindedly competitive about making Nike the No. 1 basketball sneaker in the world. Episode 5 shows Jordan covering up the Reebok logo on his Team USA uniform at the 1992 Olympics with an American flag so as not to give the rival company any shine on the medal stand. The Last Dance does not show Jordan saying that he would look into allegations of sweatshop abuses at Nike when confronted by activists and then doing nothing. The Jordan who stayed silent when kids were being killed for their sneakers—well, that hasn’t been seen either.

Instead we get a Jordan who tells the critics to piss off. Republicans buy sneakers too: It’s more than an offhand comment said within earshot of reporters. It’s a mantra. Jordan is in effect using this documentary to tell a new generation that you don’t have to care about anything if it gets in the way of the ultimate goal: to be No. 1. The hell with the person to your right or left.

At a moment when we desperately need a more compassionate and collectively minded approach to each other’s lives, that’s an ethos that needs to be challenged. Yet it lives on, represented starkly by the armed “Don’t Tread on Me” protesters gathering in front of governors’ mansions, calling for death over discomfort. That’s what you do when some lives are deemed more expendable—less essential—than others. That’s what you do when winning matters more than the people you bring with you along the way.

Jordan’s documentary is his “Don’t Tread on Me”: He did it his way and it was the right thing to do, and the proof is that he’s Michael Jordan and you’re not. We need to understand that, and as much as he, his brand managers, and ESPN want to lionize that approach to life, we are also allowed to reject it. We should thank Michael Jordan for showing us who he is—exactly who we thought he was.