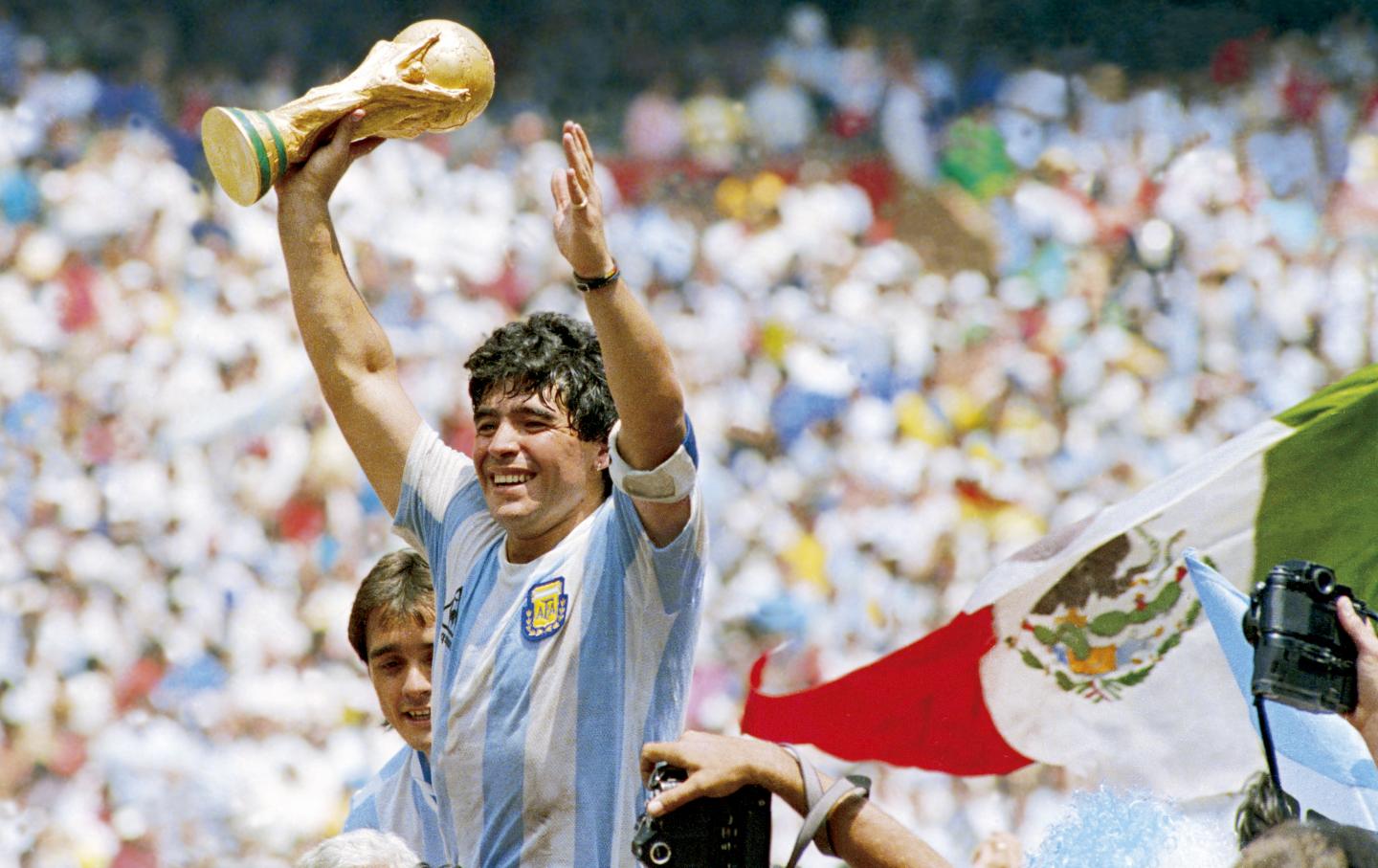 The world mourns today the passing of Diego Maradona, the soccer god and revolutionary from Argentina whose play inspired all manner of poetry and prose. The best description of Maradona’s abilities came from the late Eduardo Galeano, who wrote of Maradona in his book Soccer in Sun and Shadow,

No one can predict the devilish tricks this inventor of surprises will dream up for the simple joy of throwing the computers off track, tricks he never repeats. He’s not quick, more like a short-legged bull, but he carries the ball sewn to his foot and he’s got eyes all over his body. His acrobatics light up the field…. In the frigid soccer of the end of this century, which detests defeat and forbids all fun, that man was one of the few who proved that fantasy can be efficient.

That Maradona died of a heart attack at the too young age of 60 seems preordained for multiple reasons. He lived a life of excess and addiction; of cocaine and massive weight fluctuations that undoubtedly placed a mammoth stress on his heart. He also lived a life of passionate, rebel intensity, always standing against imperialism; always standing for self-determination for Latin America and the Global South, always speaking for the children growing up in conditions similar to the abject poverty of his own upbringing in the Villa Fiorito barrio of Buenos Aires. He was the fifth of eight children, living without running water or electricity, and never forgot it for a moment. His heart may have simply been too big for his chest.

Maradona took political stances throughout his life that were never easy. A Catholic, he met with Pope John Paul II and told the press afterward, “I was in the Vatican and I saw all these golden ceilings and afterwards I heard the Pope say the Church was worried about the welfare of poor kids. Sell your ceiling then, amigo, do something!”

He tried to form a union of professional soccer players for years, saying in 1995, “The idea of the association came to me as a way of showing my solidarity with the many players who need the help of those who are more famous.… We don’t intend to fight anyone unless they want a fight.”

Maradona always stood with the oppressed, particularly with the people of Palestine. He made sure they were not forgotten, saying in 2018, “In my heart, I’m Palestinian.” He was a critic of Israeli violence against Gaza, and it was even rumored that he would coach the Palestinian national team during the 2015 AFC Asian Cup.

Maradona had tattoos of Fidel Castro and Che Guevara, and likened himself to Guevara, calling him his hero. Maradona credited the Cuban medical system with saving his life, when he arrived there, addicted and dangerously overweight, only to emerge looking like he could still take on the next generation of competition. He supported Venezuelan leader Hugo Chávez, at a time when Chávez was undertaking radical plans to redistribute income and education to the country’s poor. He was a steadfast opponent of the Bush regime and the Iraq war and sported T-shirts proclaiming Bush as a war criminal. He once said, “I hate everything that comes from the United States. I hate it with all my strength.” That sentiment made him a hero to the billions who live under this country’s boot.

Many will surely write about Maradona’s prowess on the pitch; his legendary World Cup runs, his “hand of God” goal against England, his ability to go the length of the field with the ball “sewn to his foot.” Others will dwell over his torments, his pain, and his demons. But let’s take a moment and raise a glass to Diego Maradona, comrade, friend, and fierce advocate for all trying to eke out survival in a world defined by savage inequalities. Many are writing today that Maradona is now resting in the “hand of God.” I prefer to believe that he is hard at work organizing the angels. Diego Maradona: ¡Presente!