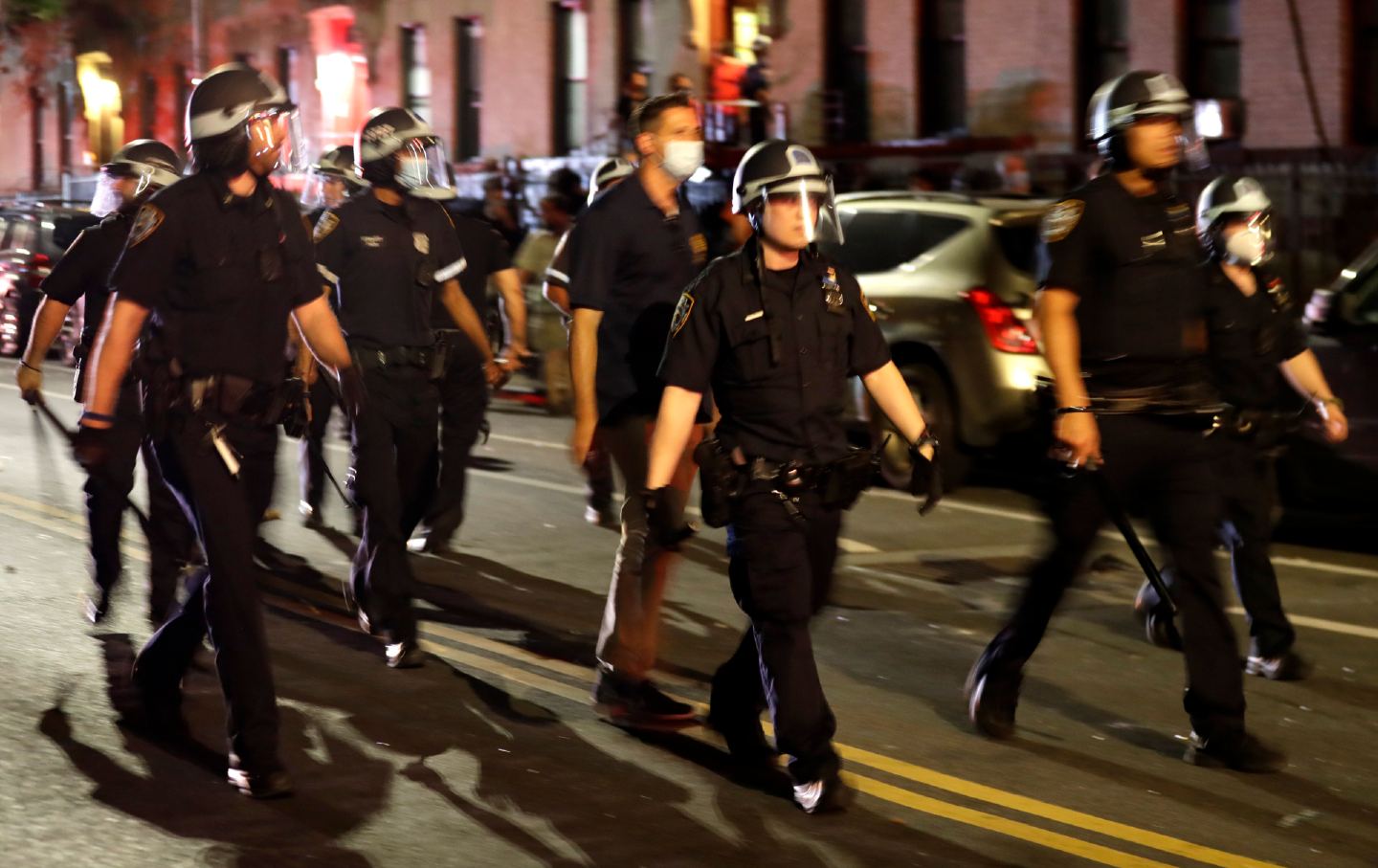 Protests over the murder of George Floyd, Breonna Taylor, and decades of racist police violence are raging across the country—and in city after city. In response, cops are destroying property. Cops are beating citizens. Cops are driving their cop cars into crowds of people and shooting at and arresting members of the media. Cops, the people in this situation with training and guns, are finding ways to escalate the tension they’re supposed to be trying to quell.

Some states, notably Minnesota, have called in the National Guard, I guess because simply arresting the cops and accomplices who committed murder on camera is too easy. But in most of the country, local governments are still in charge. Policing is among the most basic functions of local government. Our president, last seen hiding in a bunker and trying to start a race war on Twitter, is not the civilian in charge of the cops. Our mayors are.

And for the most part, our mayors are failing. Our police commissioners are failing. When a protester (or white nationalist infiltrator) sets fire to a business, that’s a crime against property. When a police officer opens his car door to whack a protester as the car speeds by, that’s state-sponsored terrorism. When you see a mayor or local official bemoan the damage to the business but ignore the attempted vehicular homicide, what you are seeing is a failure. It’s a failure of government at its most basic level.

All mayors want two things: peace and control. They look to the police to give them both. The police are the ones who show up if somebody shoots at you or steals from you or accuses you of playing your music too loud. Police are the option of first resort for crime, accidents, or mere annoyances of daily life. If something is burning, you can call the fire department; if somebody is dying, you can call an ambulance. But if almost anything else is happening, you have to call the cops or deal with it yourself.

It is in these moments that mayors are supposed to stand up—and tell the police to stand down. These are the times when the civilian leadership is supposed to put a stop to the violent excesses of their paramilitary forces.

Most mayors are not doing that. It turns out that putting mayors in charge of the police is like putting rodeo clowns in charge of a bull: They’re not trying to ride the bull; they’re trying to hang on for dear life and avoid being trampled to death.

And nobody looks more like a clown right now than New York Mayor Bill de Blasio. Most mayors in this country fail to control their police, but de Blasio is unique. He explicitly campaigned on his commitment to standing up to the police and holding them to account for their violence. Now that he’s actually in power, he has turned into a shill and apologist for police brutality.

What adds insult to injury is that he used his son, who happens to be black, to close the deal on his election. De Blasio put his son in campaign ads. These ads are credited with fueling de Blasio’s surprising landslide victory in his first mayoral election in 2013. He used his son again in ads during his brief run for president. Bill de Blasio put his son up as collateral to get a credibility loan from black people in New York. But now that the payment is due, now that he’s supposed to pay out on his promise to stop police brutality, he is out there literally blaming protesters for making police cars drive into them.

At a press conference Sunday, de Blasio said that footage of a police car driving into a crowd of protesters was “upsetting” and that he wished the officers hadn’t done that. But he continued, “But I also understood that they didn’t start this situation. The situation was started by a group of protesters converging on a police vehicle, attacking that vehicle.” I don’t know when de Blasio started outsourcing his press releases to Donald Trump, but I’m sure the statement sounded better in the original Queensian.

De Blasio blamed protesters for not getting out of the way of a cop car early on Sunday. But late Sunday his daughter was arrested, allegedly for (wait for it) refusing to clear a roadway and throwing objects at the police. The Sergeants Benevolent Association leaked her arrest report (before the tweet was deleted) in an apparent attempt to embarrass de Blasio (and, in the process, putting his daughter at real risk). I wouldn’t put it past the NYPD to arrest the mayor’s daughter just to embarrass him, so I’m not going to assume she did anything that warranted arrest. I am going to assume that if de Blasio, who said he was proud of his daughter, won’t stop the police from engaging in behaviors that put his own children’s lives at risk, the rest of us are screwed.

This is the kind of betrayal of principles de Blasio has engaged in throughout his time in office. He endorsed “broken windows” policing, which directly leads to racial profiling. He added 1,300 cops to the force in 2015, instead of doing anything to scale back the overpolicing of the city. It took the city five years to get rid of Daniel Pantaleo, the officer who choked Eric Garner to death in Staten Island. De Blasio said he learned his lesson and would act more quickly in the future. But it’s been a month since video emerged of officer Francisco Garcia sitting on the head of a man who allegedly violated social distancing guidelines in the East Village—a move not dissimilar from the tactics that killed Floyd, but Garcia has not been fired, much less arrested.

De Blasio cannot and will not control the cops. And that means the police will get more brutal as these protests continue. The unmitigated failure of his leadership highlights the weakness of mayors generally and their inability to control the small armies now under their command. Mayors often come to power with no training in policing and no tactical understanding of the use of force. Most mayors have no military training. They are not experts in urban deployment strategies. And yet they control paramilitary forces that employ counterinsurgency tactics every time a crowd of black people shows up with a megaphone.

Newly elected mayors may have ideas—or at least slogans—about better, more equal policing, but they quickly become overly reliant on their police commissioners, most of whom are more worried about protecting the police than protecting citizens from the police. Politically, mayors are beholden to police unions, whose support is thought to be critical to their electoral chances.

The result is that we don’t have effective civilian control over our police forces. Nobody is in charge. The police are able to act like police, with all the brutality and bias that entails, and the only people holding them accountable are other police officers or elected officials who are themselves afraid of the police.

Ineffectual civilian control of police power has always been a problem, but those problems have been accelerated by the militarization of police. Within the lifetimes of most millennials, the police have completed a transformation from club-wielding marauders to paramilitary troopers zooming around town in armored personnel carriers. Our mayors, generally, are not enlightened enough, not experienced enough, and not trustworthy enough to harness the power now wielded by our local police.

The only real solution is disarmament.

We can start in New York City. It is looking at a $10 billion budgetary shortfall, thanks to Covid-19 and the attendant measures to stop its spread. The annual budget for the New York Police Department is $6 billion. De Blasio has proposed cutting that budget hardly at all while proposing massive cuts to things less important to him, like the Department of Education.

The mayor has that entirely backward. It is the militarized, violent police who need to have some of their toys taken away, while schoolchildren should get to keep all of theirs—or, hell, maybe even get some new ones, like language programs or art classes or fresh math textbooks.

And when it comes time to elect a new mayor, New Yorkers shouldn’t vote for the one who promises to control the police. We’ve already been lied to about that. We already understand why mayors can’t really get control of the cops. We need to find a mayor who is humble enough to admit that he or she cannot control the police—and instead commits to defunding them and reducing their power.