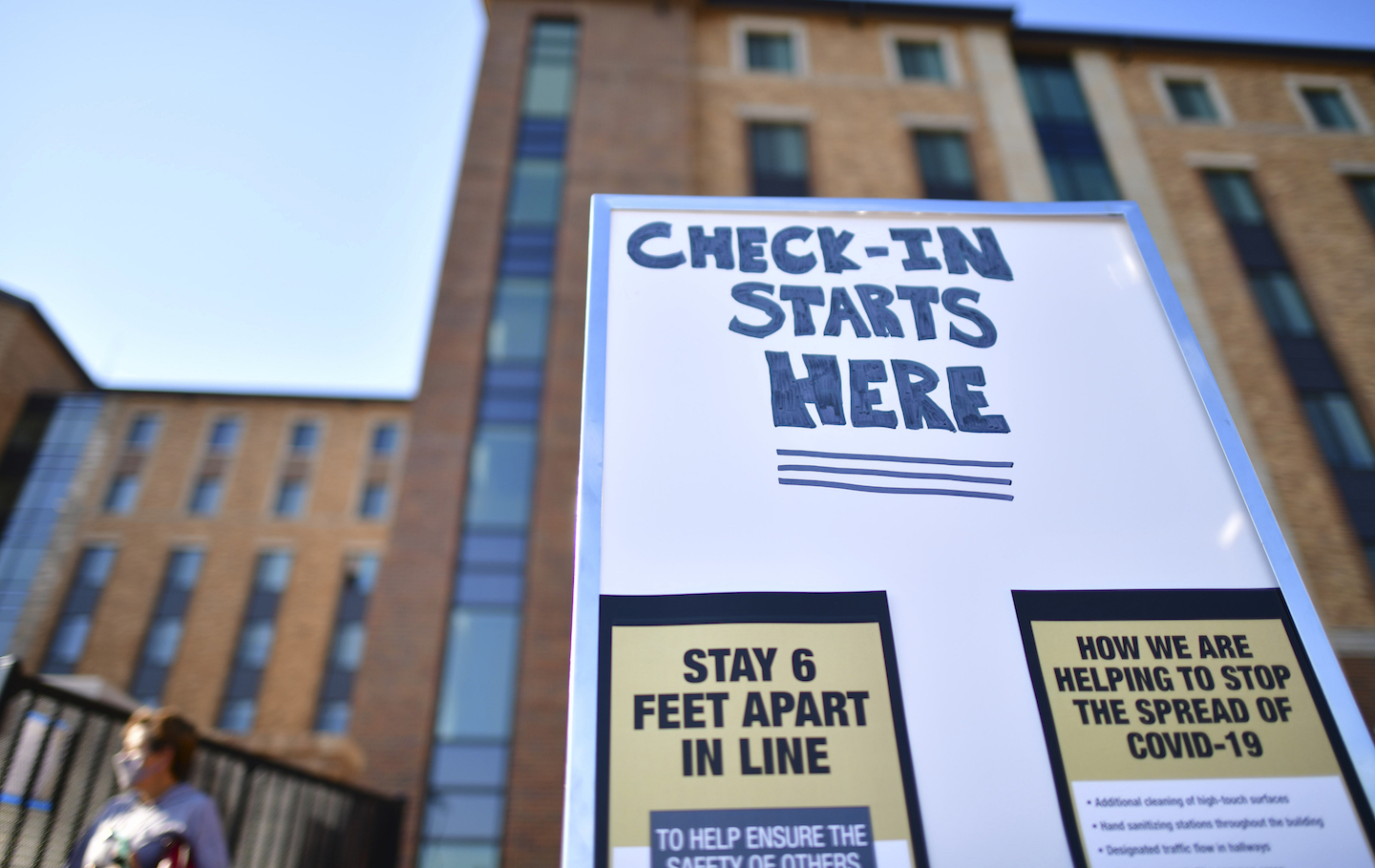 Placards advise physical distancing guidelines due to the coronavirus pandemic while directing incoming freshman moving into a campus dormitory at University of Colorado Boulder on August 18, 2020. (Photo by Mark Makela / Getty Images)

oulder, olo.—The call to action my generation received, during our first moment of inflection, was to get back to business. I was in my last year of high school on September 11, 2001, when an airliner slammed into the Pentagon a few miles away. Later that month, while visiting O’Hare International Airport, President George W. Bush implored the American people to “do your business around the country. Fly and enjoy America’s great destination spots. Get down to Disney World in Florida.”

Don’t soul-search or undertake shared sacrifice. Don’t learn Arabic or better understand the wider world. Take a picture with Mickey Mouse, where Jeb Bush was governor. To someone young and looking to find a calling and a purpose, such leadership was crushing. It was an invitation to waste the best energy of youth.

In 2006, as President Bush’s delusional wars in Afghanistan and Iraq raged on, he told us much the same thing: “I encourage you all to go shopping more.”

Back to shopping, back to school—we are there once again.

I teach at the University of Colorado now, and my students are coming of age in another moment of inflection. They are entering adulthood during a pandemic, an economic collapse, and a historic uprising for justice. What calls to action have they received?

Labor, Land, and Legacy: What New Might We Grow in the Shell of the Old?

On the Road During a Pandemic, From Austin, Texas, to Metro D.C.

The virus, their president told them, is no cause for change: “It’s going to disappear. One day—it’s like a miracle—it will disappear.” That was in February. He said everything would be back to normal by April. Trump’s delusions exceed those of his predecessor. But I don’t want to focus on presidents any more than they deserve, for they are not the only ones teaching the young.

I have had delusions of my own. Until the very last minute, I thought I could still make it to long-planned engagements in Europe in late February. I let myself believe the assurances that, somehow, our kids would be impervious to the virus at school. I keep imagining I can go back to business as usual.

Now my university is opening again, behind plastic shields and face masks. Students are repopulating the dorms and roving around town in partially masked flocks. Since we receive only an infinitesimal part of our budget from the state, we’re told, institutional survival requires business as usual. I am refreshing an old syllabus. Vast bureaucratic expertise has gone into establishing the fiction that such a thing is reasonable, that we can continue to provide the experience that students and their families are paying so much for. Perhaps, if we taught a different lesson, we could.

Earlier in the summer, a group of my colleagues published an open letter arguing that the return to campus would be not only a medical danger but also poor pedagogy. “It is the responsibility of the leadership to tell them,” these professors wrote, “to put public health first, and not to make false promises about a meaningful on-campus experience, when health and lives are on the line.” I didn’t sign. I was still waiting and seeing.

Colleges missed the chance to directly address our students as moral beings rather than desiring consumers, and invite them to join us in a time of grieving perseverance in order to save ourselves together. Will never get over that. Intend to teach that way myself.

She reminds me of two lines from a poem by Ralph Waldo Emerson. At some old colleges, these lines are carved into monuments to students killed in the Great War (and, surely, the concurrent influenza pandemic):

’Tis man’s perdition to be safe,
When for the truth he ought to die.

As a student at Brown University, I walked by those words almost daily, hearing their call to sacrifice in grating opposition to what President Bush was asking of us at the time. The words themselves invert Angela Zito’s lament: “man” rather than all of us together; an adventure of death as opposed to the struggle for collective safety. Yet Zito and Emerson are united in their embrace of a morality that embraces non-normal times, that invites the young to take history upon themselves and act in it—not merely for the sake of approximating their earlier expectations but in order to raise their expectations and live lives that mean something.

Can we teachers “address our students as moral beings” behind the institutional pretense (and masks and screens) of normal education delivery? As Zito says, we need to grieve. Then we can get down to the non-normal work of reshaping our world out of this cataclysm.

I hope my students will hear the call to put their best selves into this moment. It’s their time. Those who most want to rush back to normal are probably those who most fear the opportunity for change that the young now have before them.