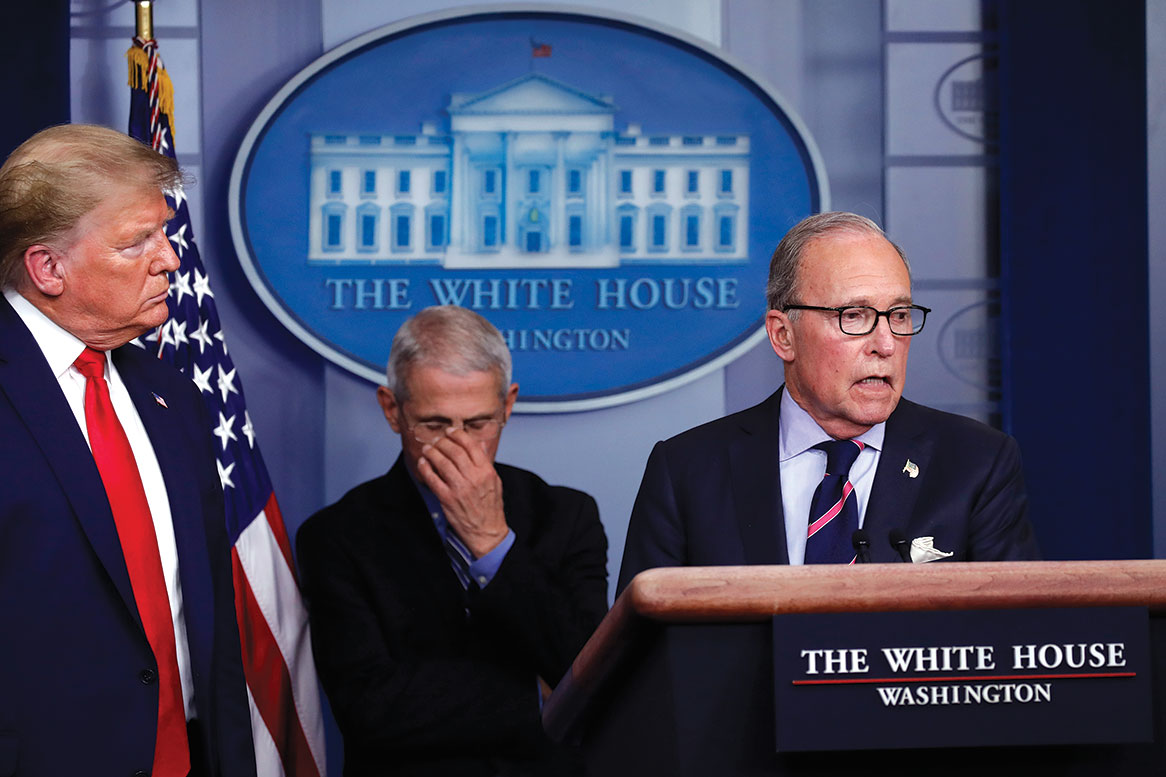 It would appear that Donald Trump has fully transitioned from moving too slowly to meet the threat posed by the coronavirus outbreak to moving too quickly to “reopen” the country. First, he said that Covid-19 was just like the flu; then, he said it would “wash through” by April and everybody should go to church on Easter. Now he’s saying that we should be “back to normal” by May.

I don’t believe him, because, unlike a moderate or a goldfish, I have the capacity to remember things that happened more than 20 seconds ago. But it’s not just Trump. I don’t believe anyone these days.

Unfortunately, Trump isn’t the only one who’s made bad decisions or issued rosy projections that have cost lives. He’s had a lot of help. Our country operates under a theory of rapacious capitalism, and that has been on full display during this crisis.

We saw employers who demanded that nonessential workers come into work, thereby fueling the spread of the virus. We saw state governments react slowly to close down business and public meeting places. We saw religious leaders urge people to come to services, and community leaders urge people to go to the mall, until the stark and deadly reality of the virus began to take lives, and they (well, some of them anyway) began grudgingly to change their tune about the seriousness of the pandemic.

Now, this same collection of leaders is in charge of telling us when the crisis has passed—and we’re supposed to trust their judgement about when to reopen the country, even as so many of them failed to act quickly enough to shut it down in the first place. What kind of gullible fool do they take me for? Even George W. Bush wasn’t that kind of trusting sap, as he reminded people when he famously bumbled: “Fool me once, shame on you… Fool me… uhh… you can’t get fooled again.”

Apparently, though, I am much more skeptical of our leadership than the average American is. A recent CBS/YouGov poll showed that 90 percent of Republicans trust Donald Trump for accurate information about the coronavirus outbreak, while just 14 percent of Democrats do. The president could tell them that Kool-Aid kills Covid-19, and almost all Republicans would drink it.

Nothing reasonable can be done about this, and the sooner we stop treating Republican voters like rational actors the better. But it was the ratings for various other institutions and actors in that CBS poll that made my jaw drop. The question presented was: “Who do you trust and not trust to give you accurate information about the virus and what to do during the Outbreak?” Among all respondents, Trump’s trust rating was only at 44 percent, but check out the numbers for everybody else:

Wait—what? We live in a world where 73 percent of Americans trust their family and friends for coronavirus tips? Somewhere, somebody is relying on the wisdom of their college weed connection to figure out if it’s safe to go to a house of worship. I’d sooner ask a dinosaur how to stop a meteor before I relied on my friends and family to tell me when it’s safe to go to a museum.

In truth, I do not trust anybody on this list. I live in New York, and thus feel blessed by having a competent governor who isn’t a Republican trying to fight coronavirus with thoughts and prayers. But do I trust Andrew Cuomo to tell me the straight truth about when the crisis has passed? Not really. Cuomo could be heard railing against New York’s “excess capacity” of hospital beds at any point before the last six weeks or so. And Cuomo has worked to cut Medicaid funding in the state.

And don’t even get me started about the years’-long blood feud between Governor Cuomo and New York City Mayor Bill de Blasio. My parents’ marriage was filled with less acrimony and mistrust—and my parents divorced 30 years ago. Cuomo and de Blasio dithered on whether and when to close schools. The subway has been a mess during both of their tenures, even before it was a Covid trap for transit workers. These two didn’t get it right in February when decisive action could have mattered, and now they can’t even get their stories straight on whether schools should be closed down for the rest of the year. Forgive me if I feel like the health and safety of my children shouldn’t be the rope in their latest contest of grown-up tug-of-war.

Do I trust the Centers for Disease Control and medical professionals to declare the crisis “over”? Absolutely not. It’s not that I don’t trust science. I’ll go to the mattresses for Sir Isaac Newton because, well, gravity is kind of always pulling you toward the ground anyway. What I don’t trust is the ability of medical professionals or the CDC to consistently stand up to Trump and his administration. The CDC seemingly folded to political pressure in March when it removed stats tracking American coronavirus cases. It bungled the rollout of coronavirus testing and has never provided enough tests. Even now, we still don’t have enough tests. The CDC is the agency I’d like to trust, but I can’t because I don’t know if they are being manipulated by Trump.

As for other medical professionals, at this point I’m going to need to know whom a doctor voted for before I listen to anything they say about when I can go out. That’s because the cultlike fealty to Trump seems to overpower even advanced medical training. Just look at Surgeon General Jerome Adams, who has utterly debased himself in service of Trump. First, he downplayed the virus when Trump wanted him to, and now he’s out there shucking and jiving and telling people of color not to do drugs “for Big Mama,” as if he’s only met other black people by reading a white person’s review of a Tyler Perry movie. I don’t want to be here, but the politics of doctors becomes important when you see Republican doctors actively misinforming the public in order to stay in Trump’s good graces.

I could do this for every institution. I work online, so obviously I don’t trust anything that I only see on the Internet. A butcher does not eat other people’s sausages. The national media decided long ago that Trump was too good for their ratings and subscriptions to say or write anything about him without creating a false equivalency between facts and Trump’s “alternative facts.” So they’re out of the circle of trust.

And while I’m not surprised that so many Americans trust religious leaders in this moment, history tells me that the absolute last people I should listen to during a plague are the purveyors of organized religion. Doubting Thomas is in my quarantine house and has the remote.

I live in a trust desert. Like anybody else, I’m desperate for somebody to trust. I want to believe that shimmering off in the distance is really an oasis, not a mirage. But I’m not so desperate as to drink the sand. The institutional response to the coronavirus has ranged from slow to bungling, to straight-up criminal. The people who took too long to tell me to shelter in place have not earned the right to tell me when to come out of hiding.

Immigrants Are Bearing the Brunt of the Coronavirus Crisis

And yet, they will. At some point, somebody in a suit will tell me that it’s “safe” to go back to the office, or the bar, or the home improvement store. Am I supposed to believe them? At some point, somebody wearing medical scrubs (for dramatic effect) will tell me that as long as I practice good hygiene, I can go to a ballgame or go vote. Will they have thought through whether Covid-19 is coming back with a vengeance this fall or next spring? Do they know if people who, miraculously, made it through this period without being exposed are more at risk from the next wave of the novel coronavirus? How long are people even contagious?

Republicans will follow their dear leader off a cliff if that’s what he orders them to do, but how are the rest of us supposed to stand up to institutions that don’t value our lives all that highly? The day is coming when Trump will declare “Mission Accomplished” over the coronavirus. The day is coming when business leaders will order everybody back out in public, and back to work, to prop up the stock market. The day is coming when people are still dying from Covid-19 but that death toll no longer makes the nightly news.

Still, even if Donald Trump and every employer and economist in the country decides that lives should be lost so profitability can resume, they can’t just tweet the country back “open.” There is no “on” button. If people are forced to go back to work, and risk death doing it, many will. But going back to work and returning to normalcy are two different things. Regaining the public’s faith that we are safe outside our homes will be hard. No matter how many Republicans defiantly shake hands and sneeze on each other at a future “Grand Reopening” Trump rally, this country is going to need more than a Dr. Oz segment on Fox News before it’s ready to function at full capacity again.

My birthday is in May, after Trump’s new made-up date for defeating the coronavirus and getting back to normal. I usually celebrate with karaoke, but this year? Am I really about to go to a small room where my friends and I sing and spittle into a microphone that we all pass around to each other? No, thanks. If the risen Christ told me it was safe to do karaoke this year, I think I’d say to him, “My dude and savior, let me tell you about this thing called TikTok.”

It’s going to be a long time before I get back to normal. Have fun opening up the country without me. Agoraphobia feels like a rational response when all the people who have lied to you before tell you that it’s now safe to play outside.