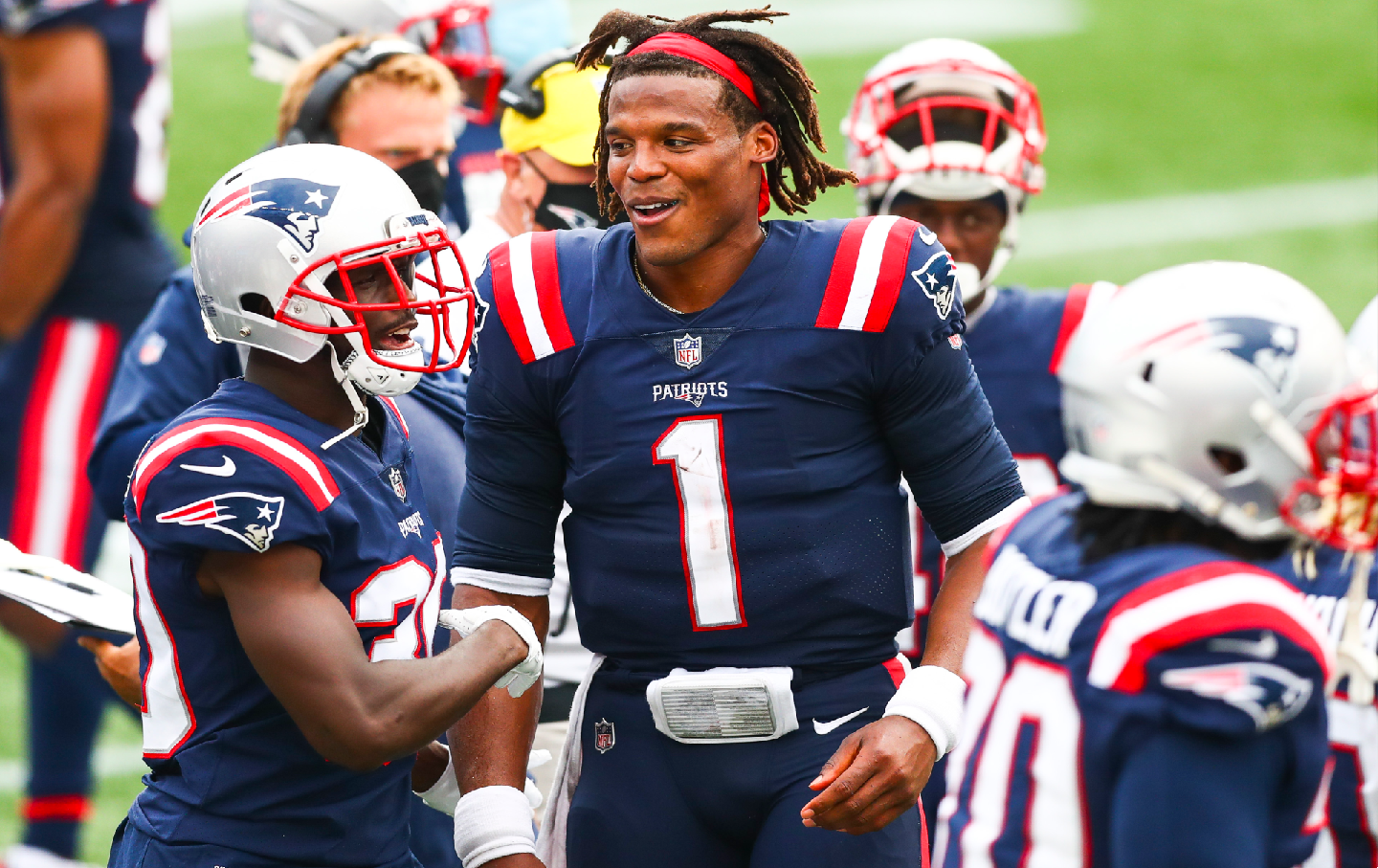 Cam Newton of the New England Patriots during a game on September 27, 2020 in Foxborough, Mass. (Adam Glanzman / Getty)

This isn’t just about hindsight. It’s about wondering why people in positions of great power still act as if they haven’t learned anything about the coronavirus and how it spreads. No, I’m not talking about that belching gas ball of typhus otherwise known as the GOP. I’m talking about Commissioner Roger Goodell, who with one awful decision may have cracked the delicate eggshell surrounding the 2020 NFL season.

Gregarious New England Patriots quarterback Cam Newton was diagnosed with Covid last week. For reasons that boggle the mind, the NFL decided that since the rest of the team tested negative, the Patriots could still play Monday night against the defending Super Bowl champions, the Kansas City Chiefs. Just one precaution was taken following Newton’s positive diagnosis: The Patriots took two planes to Kansas City, one carrying the 20 players who had “close contact” with Newton during the previous week and another with the rest of the team. This is contact tracing, NFL-style.

Goodell signed off on this plan even though we all know that the virus can incubate for days and a negative test one day could easily become a positive test the next. Even as this very nightmare scenario was playing out for all to see at the White House, Goodell wasn’t concerned. Now we find out on Wednesday that Patriots cornerback—and reigning defensive player of the year—Stephen Gilmore has tested positive. Gilmore played every single snap against Kansas City. Even more alarming, there are multiple photos of Gilmore face to face and within spittle distance of the galactically talented Chiefs quarterback, and TV ratings magnet, Patrick Mahomes. Now everyone connected to the league—the hundreds of players, the thousands of employees—must figuratively hold their breath and wait to see just how deep the damage will be.

Everyone must wonder how Roger Goodell could have made such an egregiously negligent decision. It’s not as if the league wasn’t ready for this. It had already canceled a game between the Tennessee Titans and Pittsburgh Steelers last Sunday after an outbreak on the Titans team. In a disturbing demonstration of just how quickly the virus can spread in the close quarters of a full-contact team sport, the Titans can now identify 22 players and staff who have tested positive since September 24, with two more positive tests announced on Wednesday. As football writer Michael Freeman, author of the new book Football’s Fearless Activists, tweeted, “Text from Titans player: ‘I’m more concerned about some of the coaches, and all of our families, than anything else. We’re all on pins and needles here.’”

The Patriots have announced that, as of now, they have no other positive tests, and the Chiefs have proclaimed that they are Covid-free as well, but how long that precarious good news will last is unknown. Meanwhile, a player for the Las Vegas Raiders has also tested positive. Their head coach, Jon Gruden, has been flouting the requirement that coaches wear masks since game one. If the Raiders face an outbreak, this rickety season faces the prospect of collapse.

For years, Roger Goodell has faced challenges in his $40 million job running the NFL. Scandals about his handling of issues from violence against women to head injuries to players like Colin Kaepernick taking a knee for racial justice have seemed to put him on the precipice of dismissal time and again. He has always been saved by the simple fact that his employers, the franchise owners of NFL teams, have been making money hand over fist.

Goodell is brilliant at being a flak-catcher. For every off-field scandal or mishap, every exile of a worthy player, franchise owners have gotten to hide behind Goodell, taking no responsibility while he absorbs the slings and arrows from pundits and fans alike. But the decision about whether to go ahead with this now infamous Patriots-Chiefs game was Goodell’s and Goodell’s alone. This is entirely on him, and now the season is potentially at risk if the pandemic takes out two of the highest-profile teams in the sport.

For the first time after years of scandal and public relations disasters, Goodell is messing with the league’s money. The NFL doesn’t need fans for mega-profits. Its cash flows come from its multibillion-dollar TV deals. If there are no games, that means no broadcasting, and that means no dough. That scenario for the NFL bosses might very well be a bridge too far.