Head coach Brian Flores of the Miami Dolphins takes the field prior to the game against the New England Patriots on January 9, 2022, in Miami Gardens, Fla. (Mark Brown / Getty Images)

Inside the owners’ boxes of the National Football League, the emperors have been walking around naked for decades. And Brian Flores is done pretending they’re wearing clothes. The former Miami Dolphins head coach has issued a thunderclap of a lawsuit, on the first day of Black History Month, accusing the National Football League of systemic racism in the hiring of coaches and executives. He also calls out the Rooney Rule, the league directive by which NFL owners are compelled to sit down with one “minority” candidate per hiring cycle, as a performative sham that has produced nothing except unconvincing window dressing.

Flores has recently been on the losing end of the lie that the NFL cares about diversity. He just completed his second consecutive winning season in Miami. It marked the first time that the hapless Dolphins have had consecutive winning seasons in almost 20 years. Flores even brought the team back from a 1-7 start to a winning record, the first NFL coach to accomplish that feat. And yet, he was fired. On his way out, “unnamed sources” trashed Flores’s reputation—characterizations that many meek reporters, ever dutiful to the NFL, thought nothing of publishing. That ham-handed slandering brought Flores to the brink.

What, based upon his lawsuit and the chronology of events, may have finally pushed him over was a bogus Rooney Rule interview with the New York Giants, an organization that, like 7 of the 32 NFL teams, has never hired a Black head coach. Flores found out when his former mentor Bill Belichick contacted him by accident. Belichick apparently tried to congratulate Brian Daboll for landing the Giants job but texted the wrong Brian. The Giants had seemingly decided to hire a white coach with a thin résumé before Flores was even interviewed. Flores has also had enough of a league that has only one Black head coach when 70 percent of players are Black. He also knows that by issuing his lawsuit, his time in the league has almost certainly come to an end. The owners don’t take kindly to whistleblowers or people pointing out how grotesque they can look when the lights are on bright.

In his statement, Flores said:

God has gifted me with a special talent to coach the game of football, but the need for change is bigger than my personal goals. In making the decision to file the class action complaint today, I understand that I may be risking coaching the game that I love and that has done so much for my family and me. My sincere hope is that by standing up against systemic racism in the NFL, others will join me to ensure that positive change is made for generations to come. 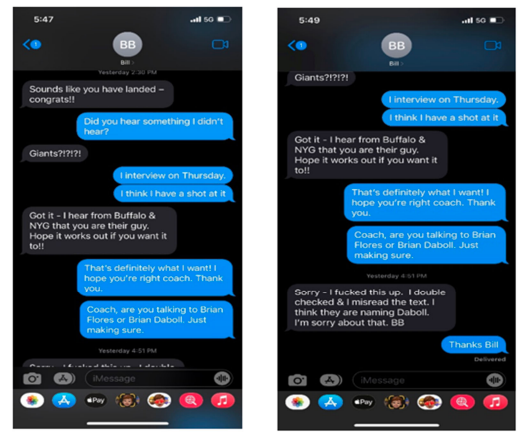 You might think the NFL would respond to this lawsuit with some humility. Perhaps they would announce their own internal investigation to see if Black coaches are being unfairly excluded from the top jobs. But this is the NFL we’re talking about: plutocratic and right-wing to its core, and they’ll be damned if they’re going to be told by the help whom they can or cannot hire. Their response, before any serious examination of Flores’s charges, is that the case is “without merit.” If you feel a spray on your cheeks, that’s 31 billionaires spitting in your face and telling you it’s raining.

I keep thinking about a tweet three weeks ago by longtime Sports Illustrated and nfl.com reporter Michael Silver: “There is systemic racism in the NFL, and there are actual racists in some positions of power. I’m done dancing around the latter.”

Clearly, so is Flores. The next step is seeing who in the NFL is done dancing and will stand with him and finally air out the racism in the building. Flores comes from the New England Patriots coaching tree. Will Belichick and the rest of his protégés hold a press conference in support of Flores and his character? Will the NFL’s so-called “social justice committee” stand with Flores? Will players who spoke out against racism outside the NFL point their finger inside the tent? This is a moment when silences will speak volumes.

Here’s hoping they’ve learned the lesson of Colin Kaepernick: Unless you are a crypto-rightist anti-vaxxer white quarterback, speaking out is not allowed, especially about the racialized labor discipline of the NFL, which demands that everyone just accept that this will be a league of Black talent controlled by white authority. The Kaepernick lesson is that they will disappear you unless you respond with solidarity and support inside the league itself. This could be the most significant fork in the road for the NFL’s racial practices since the league integrated 75 years ago—or the league will fall back into its racist sloth. To prevent that, players, coaches, and everyone in the NFL world needs to find within themselves the courage being exhibited by Brian Flores.