As I marched down Washington Avenue in Brooklyn at a protest against police brutality earlier this month, I carried a sign around my neck that read, in big block letters, i won’t be next. Black women like me may come out to demonstrations as somebody’s mother, somebody’s sister, somebody’s daughter or partner. But we are fighting for our own lives, too—while too many black women are ignored, even in death.

Since the rise of the current movement for black lives, the sparks that keep lighting the fire of dissent have usually been the deaths of black cis-men, whose faces and names are drilled into the public consciousness with every chant and every hashtagged campaign. The mainstream media then amplifies the narrative that black cis-men are most at risk, most worthy of defending—while the murders of black women and black trans and gender-nonconforming people serve as background noise or even, in the eyes of some, a distraction.

This disparity in attention has too often left the most vulnerable of the black population without the recognition, the funds, and the power to attain justice.

This lack of public name recognition may seem like an insignificant detail, but it’s not. The outcry over specific murders can be proportional to arrests, indictments, and possibly even the prosecution or sentencing of those responsible for these killings. Nationwide protests surely had something to do with charges’ now being levied at all four police officers involved in George Floyd’s murder. Earlier this year, the outrage over Ahmaud Arbery’s murder resulted in the arrest of the former-police-officer-and-son duo who killed Arbery while he was jogging near his Georgia home.

In March, Breonna Taylor, whose 27th birthday would have been June 5, was shot and killed by police while sleeping in her home in Louisville, Ky. After the national media picked up the story about Arbery’s murder, Brittany Packnett-Cunningham, a black activist and MSNBC contributor, posted on Facebook in May about Taylor’s death and demanded, “Make #BreonnaTaylor’s name as important as #AhmaudArbery’s. Make #NinaPop’s name as viral as theirs.” That prompted Bernice King, daughter of Martin Luther King Jr., and the controversial but influential writer and activist Shaun King to post about Taylor’s death as well. The story began to get more traction, but it didn’t go national until after the eruption of protests for Floyd, whose murder—and the video depicting it—dominated the news cycle.

Late calls for justice on Taylor’s behalf have yet to lead to the arrest of her killers. It took more than three months for one of the officers to be fired. And her death has still received more attention than most: In June 2019, Layleen Cubilette-Polanco, an Afro-Latinx trans woman, was found dead in solitary confinement at Rikers, where she was being held on a $501 bail stemming from a low-level drug offense and sex-work-related charge. Earlier this month, the Bronx DA found that there was “no criminality” involved in Cubilette-Polanco’s death—though a recent report from the Department of Corrections revealed that, at multiple times during her solitary confinement, her jailers had risked her safety. On May 27 of this year, Tony McDade, a black trans man, was shot and killed by police in Tallahassee. The chief of police has vowed to keep the shooting officer’s name confidential, claiming that Marsy’s Law—which keeps the names of victims of violence private for their safety—applies to McDade’s killer. That cop now has a better case for claiming he acted in self-defense.

Even those cases that do make the news may not see justice. In 2015, Sandra Bland died in a Texas jail cell after being arrested during a traffic stop. When she was pulled over, Bland was about to start a new job at Texas A&M, and her family and supporters say that she did not want to die. Despite conflicting details surrounding her mental state, her hanging in jail was ruled a suicide. The state trooper involved in the arrest was charged with perjury—a charge that was then dropped when he agreed to never work in law enforcement again.

Beyond these injustices, the mainstream media and hashtag-heavy campaigners also tend to forget other killers beyond the police: the sexual assault, incarceration, eviction, dismal wealth disparities, interpersonal violence, and maternal mortality that snatch away so many black people’s lives.

Black women have always been the stewards of our own stories. Out of necessity and solidarity, we have carried the weight of amplifying our voices along with everyone else’s. Women such as Angela Davis, Fannie Lou Hamer, and Ella Baker played major roles in the civil rights and black liberation movements of the 1950s, ’60s, and ’70s, while also being painfully aware of what Davis described in a 2018 interview: that gender was “not so much…separate from other issues, but an emerging consciousness of the interconnectedness of racism, and capitalism, and sexism.” Davis experienced firsthand the sexism that pervaded organizations like the Black Panther Party and the Student Nonviolent Coordinating Committee. She also spoke out against the Million Man March in 1995, saying at a press conference in Manhattan, “Justice cannot be served by countering a distorted, racist view of black manhood with a narrowly sexist vision of men standing ‘a degree above women.’”

Black women and queer folks have also pioneered other social justice movements, such as environmental justice and reproductive justice, with the aim of fighting for black life on different fronts. Hazel Johnson is considered the “mother of the environmental justice movement.” She founded the nonprofit People for Community Recovery in 1979, advocated for Chicago housing rights, and crusaded against environmental pollution, eventually playing a key role in Bill Clinton’s 1994 executive order for Environmental Justice for Low Income & Minority Populations. Black women and other women of color started the reproductive justice movement in the mid-1990s because they knew that legal hurdles to obtaining abortions had different implications for different folks—and that even if marginalized women could get past legal obstacles, they would still have to overcome many other problems of access. In the fight for LGBTQ rights, the Stonewall riots were led by black, trans, and queer people, including black activist, drag queen, and survivor Marsha P. Johnson.

And it was three black women, two of them queer—Alicia Garza, Opal Tometi, and Patrisse Cullors—who are credited with founding the Black Lives Matter movement, coining the slogan in the wake of George Zimmerman’s 2013 acquittal for murdering Trayvon Martin.

Black women, trans, and queer people understand the stakes. We keep crusading, even as the police kill us in the homes from which poor black women are at the highest risk of eviction. Even as the police use excessive force to subdue us and sexually harass us. Even as we are punished for doing all we can to survive domestic violence and other abuses—and even though, as one 2015 study found, the average wealth for a single black woman is only $200, compared to over $15,000 for a single white woman and $28,900 for a single white man.

In 2014, the African American Police Forum and Center for Intersectionality and Social Policy Studies started the #SayHerName campaign to bring more attention to the deaths and bodily harm of black girls and women who have had violent interactions with the police. The hashtag and subsequent efforts to highlight cis and trans women, girls, and femmes in discussions of social injustice caught on within the realm of social media, black and independent media outlets, and local activists. But you still wouldn’t know it from the majority of mainstream news headlines, the chants shouted at protests, and criminal proceedings against the officers snuffing out black life. 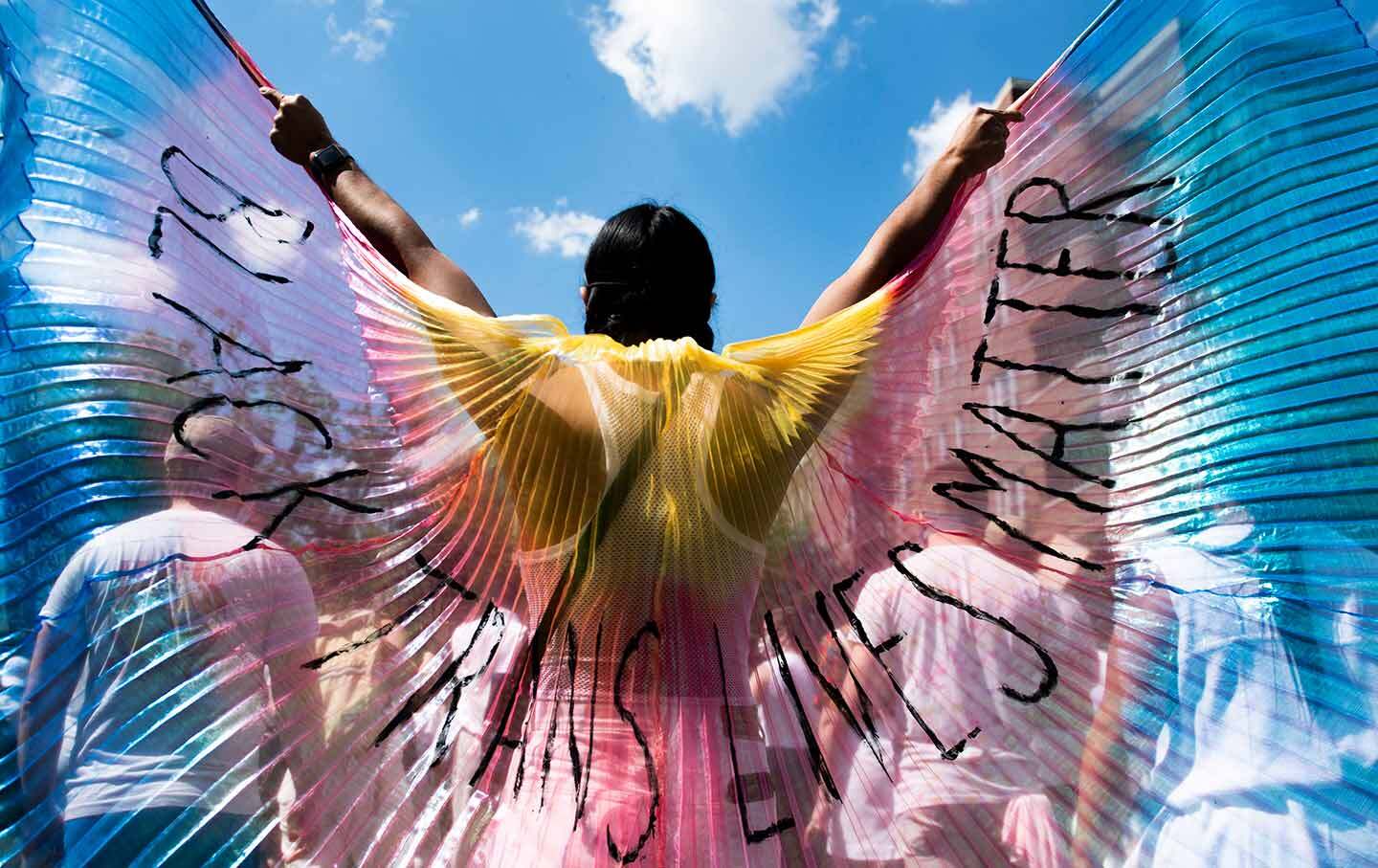 That could be starting to change. On June 14, as many as 15,000 people rallied in Brooklyn to honor, protect, and say the names of black trans lives that have been lost to all forms of violence and discrimination. The Brooklyn Liberation action was organized by more than 100 black trans women, queer people of color, and gender -nonconforming activists and artists. In speeches delivered from the plaza in front of the Brooklyn Museum, organizers reminded the crowd that too many people in our community are being victimized by state violence and institutional racism, misogynoir, transphobia, and queerphobia, without recognition or reparation.

The marginalization of black cis- and transwomen and black gender-nonconforming people in this uprising is not theoretical. Marching on Eastern Parkway, I immediately noticed a tangible, experiential difference between this protest and others I’d attended before. This protest was inclusive of queer black people and accessible to those with disabilities: organizers reserved space for people to sit on the ground or in wheelchairs, made sure the march’s second destination was wheelchair accessible, and provided an ASL interpreter for the duration of the action.

It was a potent reminder to the world that progress or remediation for some is justice for none. It was a rebuttal to those cis-black men who fear that a more expansive movement is too distracting. When we are free—from incarceration, state-sanctioned and interpersonal violence, economic injustice, environmental injustice, reproductive injustice, and human rights abuses as a whole—we are all free. Such a movement represents the future of what a fight for black lives should look like, and it is the only movement I want to be a part of.