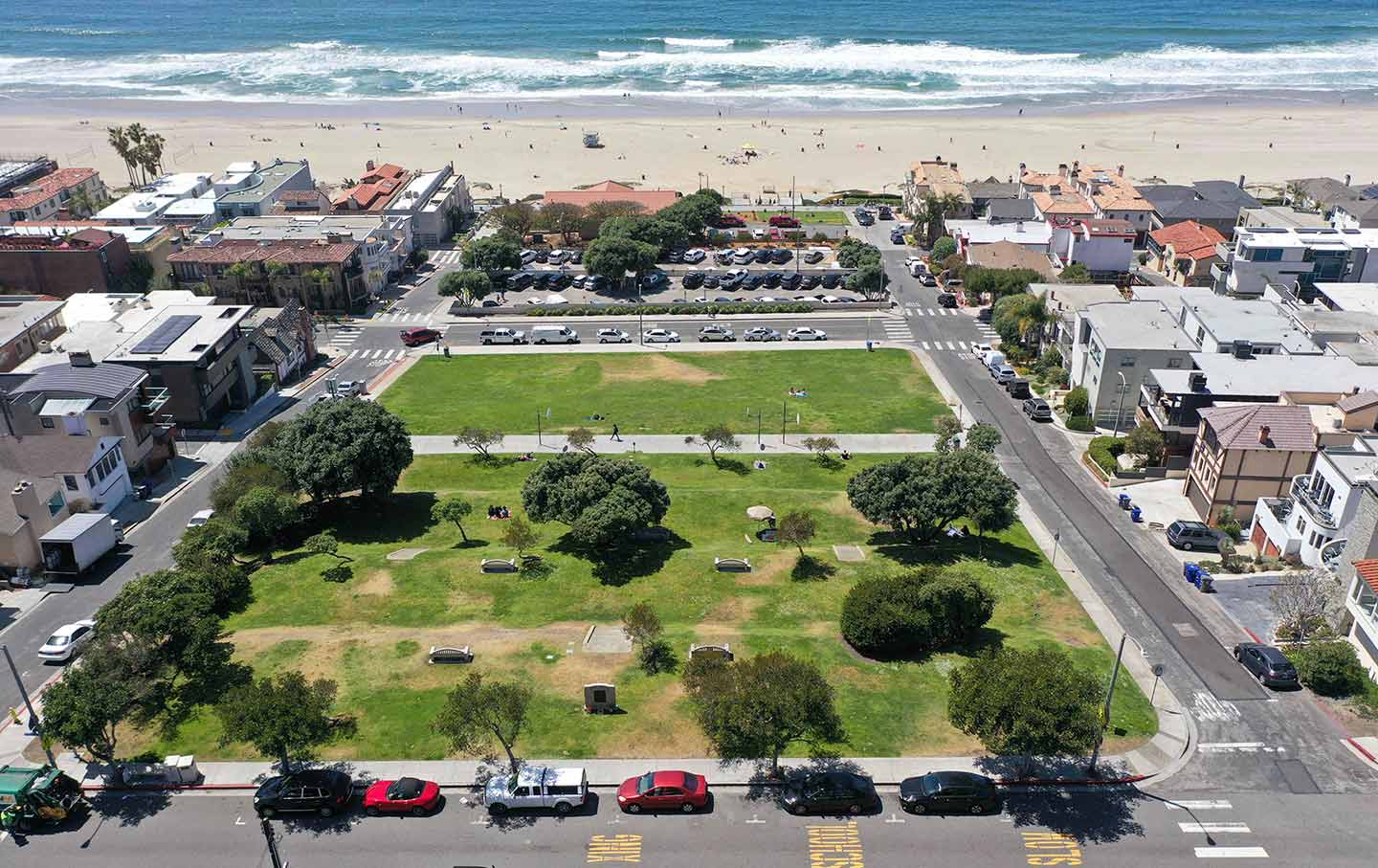 Bruce’s Beach in Manhattan Beach, Calif. Los Angeles County leaders took initial steps in April toward returning the beachfront property to descendants of a Black couple who built a resort for African Americans but were stripped of the land by local city officials a century ago. (Dean Musgrove / The Orange County Register via AP)

On April 27, a California state Senate subcommittee passed a bill to return oceanfront real estate stolen from a Black couple by white city officials in 1924 to the living descendants of its original owners. The vote brings the Bruce family one step closer to a restoration of their rightful inheritance. “This will be a precedent for this country,” Duane Yellow Feather Shepard, a Bruce family descendant and spokesperson, told me. “It needs to be studied by young people as to how they should proceed in trying to get justice for their families and their people in the African American nation within this white nation.”

Shepard’s ancestors, Willa and Charles Bruce, left New Mexico in the early 1900s, resettling in the California township now known as Manhattan Beach. In 1912, the couple purchased a plot of land for $1,225 and opened a seaside resort catering to a Black clientele, who were banned from other local beaches. As Bruce’s Lodge gained popularity, white terror inevitably followed. Visitors’ tires were frequently slashed, phony “10 Minute Only” parking signs were erected to cause inconvenience, and the Ku Klux Klan set a fire on the Bruces’ property and burned a cross near the house of a Black neighbor, one of the few who had followed the Bruces’ lead and made a home in the area. In 1915, City Clerk Lewellyn Price complained that the Bruces held “a coon picnic…attended by about seventy-five to one-hundred-and-fifty coon pullman porters and their friends,” which was “quite a detriment to the neighborhood.” Signs declaring “No Trespassing” were also strategically placed on or around a nearby property, forcing Black beachgoers to traipse a half-mile out of their way to reach the water.

“Wherever we have tried to buy land for a beach resort we have been refused, but I own this land and I am going to keep it,” Willa Bruce told the Los Angeles Times in 1912, addressing what the paper called a “great agitation among white” neighbors. She added that it only seemed right that Black folks should have “a little breathing space” to enjoy the beach.

Despite the Bruces’ resolve, the Manhattan Beach Board of Trustees ultimately drove them out, using eminent domain to seize their land and property in 1924. City officials claimed that a park would be built on the site, though it would sit dormant for nearly three decades. The Bruces sued for $120,000, a tally that included $35,000 for each of the lots they had by then acquired, and $50,000 in damages. The case dragged on until 1929, when the couple were granted a paltry $14,500 as a settlement. Having spent their final pennies fighting eviction, Shepard told me, the Bruces left California destitute the same year. Willa suffered a nervous breakdown and died in 1935, and Charles passed away two years later. Shepard believes “the post-traumatic stress of being terrorized by the KKK” and having their livelihood ripped away contributed to their deaths. Frank Daugherty, a member of the board that effectively stole the Bruces’ land, wrote in 1945 that white residents believed “the Negro problem was going to stop our progress…. I always felt that it was a mean trick to make them leave their homes, but it was the only way out.”

The Bruces’ experience of land theft was, and remains, commonplace among Black Americans. A 2001 Associated Press investigation found that 406 black landowners, through unscrupulous legal means and white terror, “lost more than 24,000 acres” that are today “owned by whites or corporations” and are worth tens of millions of dollars. Examples include the Espys, a Black family who was given a pittance by an all-white jury after their land in Vero Beach, Fla., was seized in 1942 through eminent domain. In 1965, the Los Angeles Dodgers paid the city $1,500 an acre for a portion of the land,which the team used for a spring training facility. In 2001, the Dodgers’ land was purchased by Indian River County for $10 million.

During the early 1900s, in places across America, white vigilante mobs committed anti-Black pogroms and then seized Black-owned properties for themselves. “If you are looking for stolen black land,” Ray Winbush, who leads Morgan State University’s Institute for Urban Research, told the AP, “just follow the lynching trail.” From the 1950s onward, roughly 15 million acres—a staggering 90 percent of Black-owned farmland—was lost, largely seized by the US Department of Agriculture to settle debts accrued by Black farmers as a result of the department’s racist lending practices. The USDA itself and other federal agencies have admitted to this destructive legacy of racism in multiple reports dating back to 1965.

The Bruces’ land today is estimated to be worth somewhere between $20 million and $75 million. Bernard Bruce, grandson of Willa and Charles, fought to reclaim his grandparents’ land before he succumbed to Covid-19 in January 2021, at the age of 86. His efforts, bolstered by then-Councilman Mitch Ward, the city’s first Black elected legislator, led the City Council to rename the property “Bruce’s Beach” in 2006. California State Senator Steven Bradford, a coauthor of the bill to return the Bruces’ land—which is expected to become law—said “the City of Manhattan Beach, the County, and the State owe a debt” to the family and called the legislation “what reparations looks like.” But other officials in Manhattan Beach—which today is less than 1 percent Black—balked at giving the family an official apology. Council member Joe Franklin stated that “no resident living in Manhattan Beach now is responsible for the racist actions of 100 years ago.”

Shepard told me that the return of the land “will lift a burden on the family.” “It’ll be the end of a 96-year fight to get justice, by helping to rectify what was done to Charles and Willa Bruce. They fought for this land. They didn’t just walk away. They fought tooth and nail, with everything they had.”