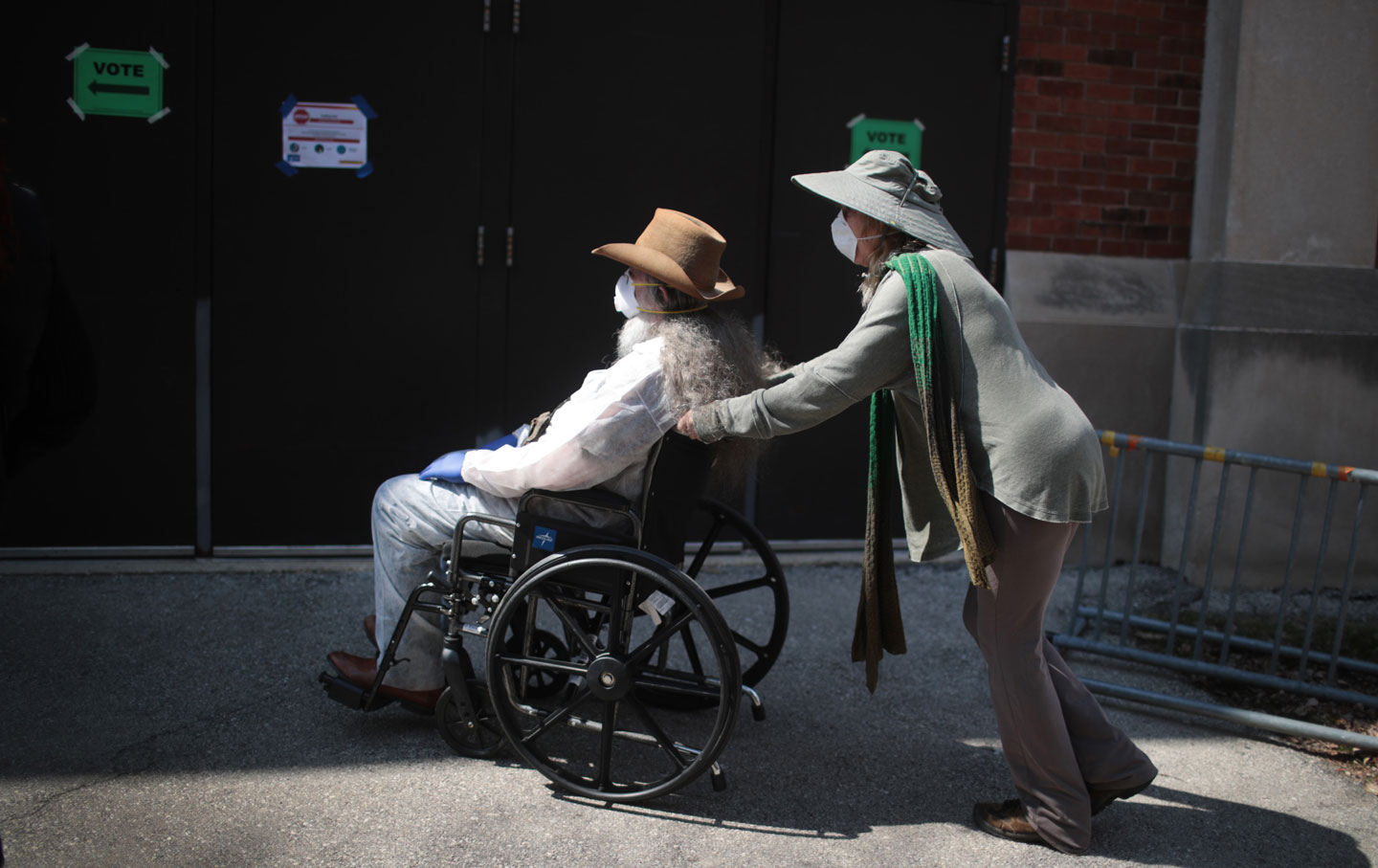 Madison, Wisconsin—Wisconsin’s Republican legislative leaders and their hyper-partisan allies on the state Supreme Court tried to game the April 7 election for a pivotal high-court seat by forcing in-person voting to go forward at the height of the coronavirus pandemic. The voters pushed back, in a big way. They rejected right-wing Justice Daniel Kelly, an appointee of former Governor Scott Walker who ran with enthusiastic backing from President Trump, by a 55-45 margin. Kelly’s progressive challenger, Judge Jill Kafofsky, finished with a 163,458-vote mandate.

Unfortunately, Kelly’s term runs to the end of July. And he is exploiting his lame-duck status to thwart the will of the people who did not want him to remain on the bench.

This week, at the behest of the same Republican legislative leaders who demanded pandemic voting in April, the Wisconsin Supreme Court overturned the state’s “Safer at Home” emergency order for preventing the spread of the virus. “Four members of the court who made a decision that wasn’t based on statutes, precedents or the facts, unfortunately…have thrown our state into chaos,” explained Wisconsin Governor Tony Evers on Wednesday night. Amid the haphazard mayhem of mixed signals, as taverns opened in some areas and local officials issued conflicting orders, Evers warned, “We’re going to have more cases. We’re going to have more deaths. It’s a sad occasion for the state. I can’t tell you how disappointed I am.”

The Democrat who was elected in 2018 to replace Walker did his best to remind Wisconsinites of the success of his “Safer at Home” policy, and its popularity—citing a Marquette University Law School poll from this week that found 69 percent of voters (90 percent of Democrats, 69 percent of independents, 49 percent of Republicans) agreed that it was “appropriate to close schools and businesses and restrict public gatherings.”

But Evers could not hide his frustration.

“Now we have no plan and no protections for the people of Wisconsin,” he concluded. “It’s the Wild West.”

Thanks to soon-to-be-former Justice Kelly.

The court ruled against Evers’s plan to maintain a stay-at-home order that mirrors those of other states for a few more weeks on a 4-3 vote. Kelly sided with three fellow conservatives to create the majority, while two liberals and a conservative sided with science and common sense.

Had Kelly’s replacement, Judge Jill Karofsky, been on the bench, the vote would by all reasonable accounts have been 4-3 in favor of maintaining the emergency order. So it was an accident of timing and the hyper-partisanship of Kelly and his cronies—as opposed to a thoughtful consideration of the law or a practical consideration of the science regarding the spread of the virus—that led to the upending of the governor’s order.

The court’s decision was so convoluted that even its author, Chief Justice Patience Roggensack, managed to reject efforts to maintain public safety and at least a measure of order while at the same time acknowledging “the concerns raised by COVID-19 and the possibility of throwing the state into chaos.”

In the majority opinion, Roggensack set up a scenario in which the governor’s order would be overturned immediately, despite arguments from lawyers for the Republicans that enforcement of the ruling should be delayed until a new, more narrowly drawn plan could be developed. Then, in a separate concurrence, she wrote, “I would stay future actions to enforce our decision until May 20, 2020.”

Our responsibility as a court is to write clear decisions that provide guidance to the litigants, courts and the public at large. I write separately to address the issue of a stay and the confusion arising from the majority and concurring opinions of Chief Justice Roggensack on the issue.

The majority opinion, authored by Chief Justice Roggensack, does not grant a stay. Thus, the declaration of rights takes immediate effect, leaving no time for a transitional safety net that a stay could provide…. However, concurring to her own authored majority opinion, Chief Justice Roggensack writes that she “would stay future actions to enforce our decision until May 20, 2020.” These positions taken in the majority opinion and the concurrence are fundamentally contradictory. If you are confused, you are not alone.

That was fine by Walker, who celebrated with a tweet that declared the decision a victory for his appointment powers. Calling the decision “a good reminder of how important judicial picks are,” the defeated former governor crowed, “I appointed 2 of the 4 justices on the 4 to 3 majority.” President Trump was equally delighted, declaring the court’s ruling to be “another win” because a “Democrat Governor was forced by the courts to let the State Open.”

For Walker and Trump, winning is the only thing that matters—even if that means chaos is created in a state where 11,275 coronavirus cases have been confirmed and more than 420 people have died. Their win-at-any-cost politics disregards not just public health and safety but also the rule of law, as was noted by an unexpected dissenter.

While Justice Kelly played the ugliest of political games, another conservative justice refused to go along with the partisan charade. Justice Brian Hagedorn broke with the party line to do right by the people of Wisconsin and the state’s Constitution.

“It is without doubt that the strictures of the constitution must be diligently defended during this crisis; the judiciary must never cast aside the law in the name of emergency,” wrote Hagedorn in a robust dissenting opinion. “But just as true, the judiciary must never cast aside our laws or the constitution itself in the name of liberty. The rule of law, and therefore the true liberty of the people, is threatened no less by a tyrannical judiciary than by a tyrannical executive or legislature. Today’s decision may or may not be good policy, but it is not grounded in the law.”