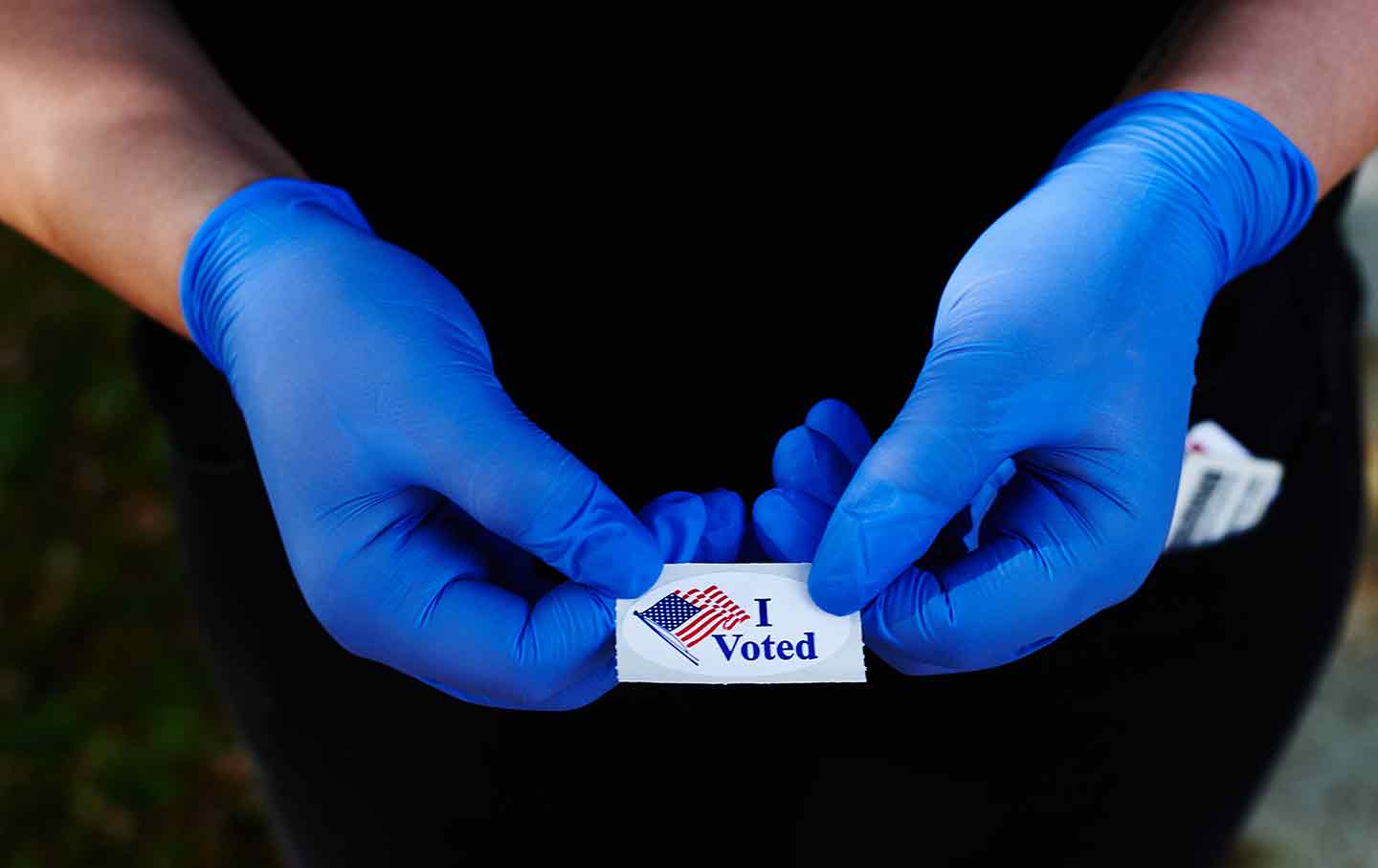 A Florida voter wearing gloves to protect from the coronavirus. (Zack Wittman / The Washington Post via Getty Images)

The coronavirus outbreak has spawned a public health crisis and an economic crisis. It has also spawned a democracy crisis, which was revealed in stark relief on Tuesday, as three states struggled to hold Democratic presidential primaries and a fourth gave up on the process just hours before the polls were to open.

After Ohio opted out of Tuesday’s voting, with a mangled last-minute postponement, state and local election officials wrestled with unprecedented challenges.

They opened as many polling places as they could in Illinois, Florida, and Arizona, even as poll workers opted to follow public health warnings and stay home. They attempted to maintain baseline public health standards, amid widespread expressions of concern that long lines and disorderly processes made it especially hard for older voters to participate.

Ultimately, they conducted counts that recorded victories for former vice president Joe Biden in all three states. Biden ran up his delegate total to 1,161 versus 861 for Vermont Senator Bernie Sanders—results that moved the front-runner significantly closer to the nomination and sparked an announcement from the Sanders camp that the senator is assessing the future of his campaign.

But it was a shallow victory for Biden and for the party on a night that provided jarring evidence of how elections are being disrupted by Covid-19. Many news headlines from the states that had scheduled primaries for Tuesday did not even mention Biden or the other winners—such as Marie Newman, the Illinois progressive who beat conservative Democratic Representative Dan Lipinski, and Cook County (Chicago) State’s Attorney Kim Foxx, who won a big victory in a race that was closely watched because Foxx is one of the nation’s leading advocates for criminal justice reform. Rather, the followed the lead of the Los Angeles Times, which announced, “Coronavirus upends primary elections in Florida, Illinois and Arizona; vote postponed in Ohio.”

There was so much confusion and chaos that Ken Martin, the president of the Association of State Democratic Committees, argued on Tuesday evening,

Today, the United States of America failed to live up to our democratic ideals when our primary election process broke down in a myriad of ways across several states. Some voters were turned away from their polling places due to a lack of equipment or poll workers, students at colleges and universities that were barred from campuses could not vote where they reside as students, others chose to stay home out of a perfectly reasonable fear of contracting COVID-19, and still more voters were put in harm’s way due to unsanitary conditions in their polling places. This is unacceptable and cannot continue.

Turnout was significantly down in Illinois and showed strength in Arizona and Florida only because of high levels of early and mail-in voting. The news from the front lines of American democracy, where in-person voting was scheduled in thousands of precincts, was filled with reports—“Illinois Stumbles,” “Coronavirus Disrupts Primary Voting,” “The Pandemic Primary…”—of what didn’t work, or didn’t work well.

In fairness to state and local officials who were dealing with an unprecedented public health crisis, it was never going to be easy to pull off elections in the face of calls for voters to “stay home” and conflicting sentiments about what that meant for in-person voting. But the disorder confirmed the observation of Kristen Clarke, the president and executive director of the Lawyers’ Committee for Civil Rights Under Law, that

The existing barriers and challenges faced by voters have grown exponentially in the wake of the current public health crisis. The coronavirus crisis has had a cascading effect during the first few weeks of this election cycle and presented growing challenges for voters. Those states that have not yet conducted primaries should move to adopt reforms now to address the burdens faced by voters this election season.

The troubles on Tuesday will lead to more calls for the postponement of primaries until after the coronavirus outbreak eases—or, at the least, until procedures can be put in place for mail voting during the crisis. For instance, Common Cause called on Wednesday “for a delay of any in-person voting for at least the next few weeks.” Common Cause President Karen Hobert Flynn explained, “The COVID-19 crisis is reshaping many of our day-to-day lives in ways we weren’t expecting, including disrupting elections, but now is the time to act to ensure our primaries and general election are held this year and conducted in a safe, fair, and orderly manner.”

Democratic National Committee chair Tom Perez was still urging states that have not yet held primaries to focus on implementing vote-by-mail strategies and other reforms “to make it easier and safer for voters to exercise their constitutional right to vote, instead of moving primaries to later in the cycle when timing around the virus remains unpredictable.”

But Maryland, on Tuesday, announced plans to shift its primary from April to June—following moves to reschedule by Louisiana, Georgia, and Kentucky. Postponement must always be the last option, as holding regularly scheduled elections is a cornerstone of democracy.

But if primaries are going to be postponed, it’s essential that that’s communicated clearly to voters.

What happened in Ohio was nothing short of pandemonium. Republican Governor Mike DeWine signaled on Monday afternoon that he wanted to postpone Tuesday’s primary. A judge ruled that the voting should go ahead as planned, declaring that delaying a scheduled election would set a “terrible precedent.” Then, on Monday night, DeWine announced his decision: “During this time when we face an unprecedented public health crisis, to conduct an election tomorrow would force poll workers and voters to place themselves at an unacceptable health risk of contracting coronavirus.”

With that, he and Dr. Amy Acton, the state’s health director, shut down the voting. More legal wrangling ensued before the Ohio Supreme Court finally rejected a legal challenge to DeWine’s order—with a one-page ruling issued on the morning of election day.

The Lawyers Committee’s Clarke complained on Monday night that DeWine was “issuing statements about the election but failing to provide crystal clear clarity about whether your constituents should show up and vote tomorrow.”

“I’ve never seen this level of sheer chaos in an election. Voters in Ohio are the ones who lose out,” observed the voting rights advocate, who noted that her group’s election protection hotline—1-800-OUR-VOTE—was receiving election day calls from Ohio voters who “were unaware that the election had been called off.” “The 11th-hour postponement in Ohio proved incredibly disruptive and chaotic today.”

But that didn’t mean that there wasn’t chaos in the states where people were voting—or attempting to vote. The trouble was especially pronounced in Illinois, where Ami Gandhi, senior counsel at the Chicago Lawyers’ Committee for Civil Rights, said, “It’s unprecedented for us to be addressing this much confusion.” Describing reports of polling places that did not open because poll workers did not show up, long lines, and widespread confusion, Gandhi said, “The normal procedures around this are simply not sufficient, and our most vulnerable community members are getting disenfranchised.”

Illinois turnout was down significantly from primary day four years ago, as Chicago elections officials complained that Illinois Governor J.B. Pritzker had rejected a proposal to cancel in-person voting and extended opportunities for mail-in voting. “Other states are postponing,” city election board spokesman Jim Allen told reporters. “They don’t have scenarios where seniors are tweeting and posting comments about being fearful of going into polling places or serving on Election Day.”

Common Cause Illinois Executive Director Jay Young got it right when he said, “The coronavirus pandemic was a stress test for our voting process here in Illinois, and it’s clear that we failed.”

After an election day that also featured significant complaints from Florida and Arizona, Martin, the chair of the Minnesota Democratic-Farmer-Labor Party and the vice chair of the Democratic National Committee, urged “all states [that] have not already done so to reform their electoral processes to allow every eligible voter to cast their ballot by mail, automatically register eligible voters to vote when they turn 18, and implement early voting periods. Additionally, as states enact their vote by mail systems, they must ensure that postage is pre-paid, that ballots are which are postmarked by election day be counted, that voters are able to correct any signature issues, and that civic organizations are able to collect and turn in sealed ballots.”

Martin’s bottom line was the right one:

We have a responsibility as a party to demand better for our voters. Our government is already taking action to combat the spread of COVID-19. As the Democratic Party, we have been at the front lines of fighting for the marginalized and disenfranchised. We need to meet the urgency felt by communities across the country to safeguard our democracy from the pernicious effects of this virus. I hope other Democratic state parties, legislators, and community leaders will join me in demanding that we live up to our country’s highest ideals and guarantee every single eligible voter the right to cast their ballot and have a say in their government.