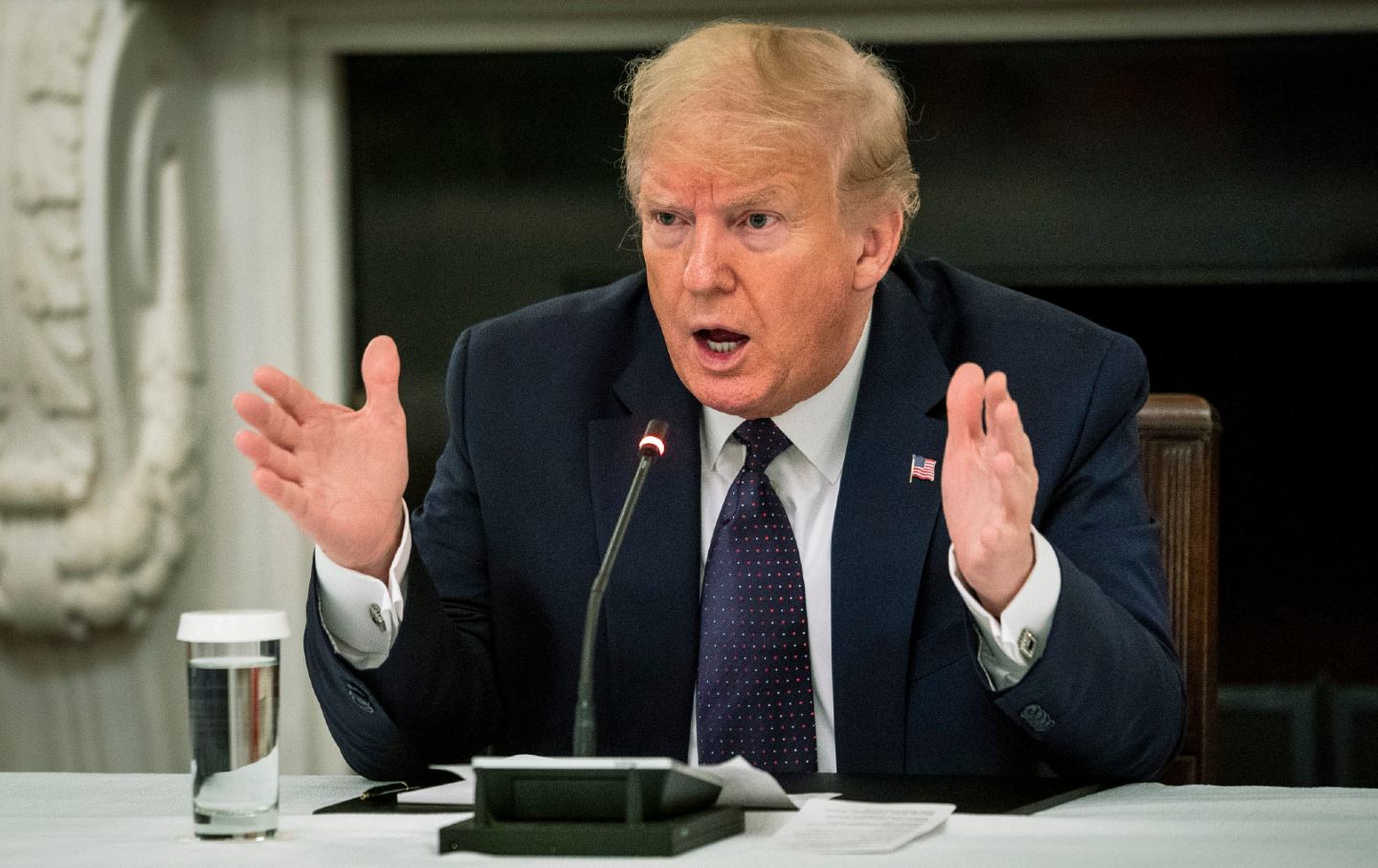 One of Tuesday’s finest pandemic entertainment offerings came from the actor, comedian, and viral video star Randy Rainbow, who’s been nailing Donald Trump, and sometimes the media, regularly during the dystopian Trump regime. Titled “Distraction,” the video skewers Trump’s disastrous handling of Covid-19 to the tune of the song “Tradition,” from the great Fiddler on the Roof. Once you’ve seen and heard it, you can’t get it out of your head.

It’s been my soundtrack as I’ve watched the media, in all its forms, cover Trump’s crackpot claim that he’s taking hydroxychloroquine, a drug to treat lupus and malaria, as a preventive measure against Covid-19. He blurted it out in a press conference Monday afternoon, and of course it became breaking news. To their credit, cable news hosts—including Fox’s Neil Cavuto—immediately began warning against viewers’ trying to get their hands on the drug, since it can have dangerous side effects and also seems worthless against coronavirus, if not actually harmful.

But the story continued to dominate the news, and mostly it’s been framed wrongly—even if coverage is trying to warn against this—as reporting on the drug Trump “is taking.” We have no idea whether the pathological liar in the White House is actually taking hydroxychloroquine; if I had to bet, I’d bet against it. For one thing, he lies all the time; for another, the White House physician released an evasive statement that could be taken as confirmation of Trump’s claim—but never actually confirms he’s taking the drug. White House Press Secretary Kaleigh McEnerny “confirmed” it, but she’s paid to lie, even if she’s not terribly good at it. Yet on Wednesday The New York Times had an in-depth feature on “the drug Trump is taking,” according to its print headline; on the Web, after some criticism, the paper appropriately changed that to “the drug Trump says he’s using.”

MSNBC’s Chris Hayes, a friend and former colleague, weighed the evidence Tuesday night and came down cautiously on a different side from me on his show last night: He thinks Trump is falling for his own con. Hayes is somewhat convinced by the timeline of Trump’s claim: that he began taking the drug after his valet and Vice President Mike Pence’s press secretary both tested positive for Covid-19. “The president literally thinks there is some secret magic solution,” Hayes hypothesized. “Donald Trump is his own mark.”

What Happens When You Age Out of Foster Care During a Pandemic?

Facing a Real Catastrophe With a Pretend President

The Virus, the Press, and the Comfortable Class

He could be right, but the point is we don’t know. Yet the story got disproportionate coverage for almost 48 hours. It’s just another example of how Trump gets the media to cover his sideshows, which then edges aside coverage of real scandals; like the firing of six inspectors general in six weeks; or Attorney General William Barr’s dropping charges against former national security adviser and confessed liar Michael Flynn, or on Wednesday his threats against Nevada and Michigan for the perfidy of sending voters absentee ballot applications. It’s not crowding out coverage of the nation’s unconscionable and avoidable Covid-19 death toll—but there shouldn’t even be any competition.

And here, of course, I realize I’m doing exactly what I’m criticizing: covering a Trump sideshow instead of any of those scandals. For now, I blame Pandemic Brain: the widely shared condition of being perpetually anxious and distracted, and eating up Randy Rainbow videos like a feast after a fast. (Vox has a good piece about the possible science behind our distraction here.) Whether or not we’re journalists, we cycle through what really matters: our own health and that of our loved ones, of course; whether we’re making progress fighting the virus or going backward as states reopen; whether scientists are finding reliable treatments or perhaps a vaccine. (Today, drug company Moderna’s claim to progress on a vaccine was questioned by StatNews. We might be swallowing pharmaceutical company Moderna’s claims as credulously as we swallowed Trump’s claim to be taking a worthless drug.)

But those of us whose job it is to tell you what’s going on, and what matters, struggle too: with all of the above, plus the almost hourly onslaught of horror and corruption associated with Trump, his administration, and many of his voters. Which of the six fired IGs should I focus on? Is Barr’s shameful decision on Flynn worse than what Secretary of State Mike Pompeo is doing at the State Department—whether having aides do personal errands or green-lighting weapons to Saudi Arabia? Oh, and we’re expelling young undocumented migrants under the cover of Covid-19, reversing years of US policy. While more than a million Americans (including his wife) have battled the disease, Trump aide Stephen Miller has been making all his xenophobic dreams come true.

Of course, it’s news that the president claims to be taking an unproven, possibly dangerous drug—one that the head of the agency charged with vaccine development says he was fired for refusing to promote (another scandal that didn’t get enough attention). But too often we treat his passing craven mutterings too seriously, cover them too credulously, and lap up the freak-show coverage as a distraction. We can control what we pay attention to, however. If you need a distraction, pay attention to Randy Rainbow’s, not Trump’s.