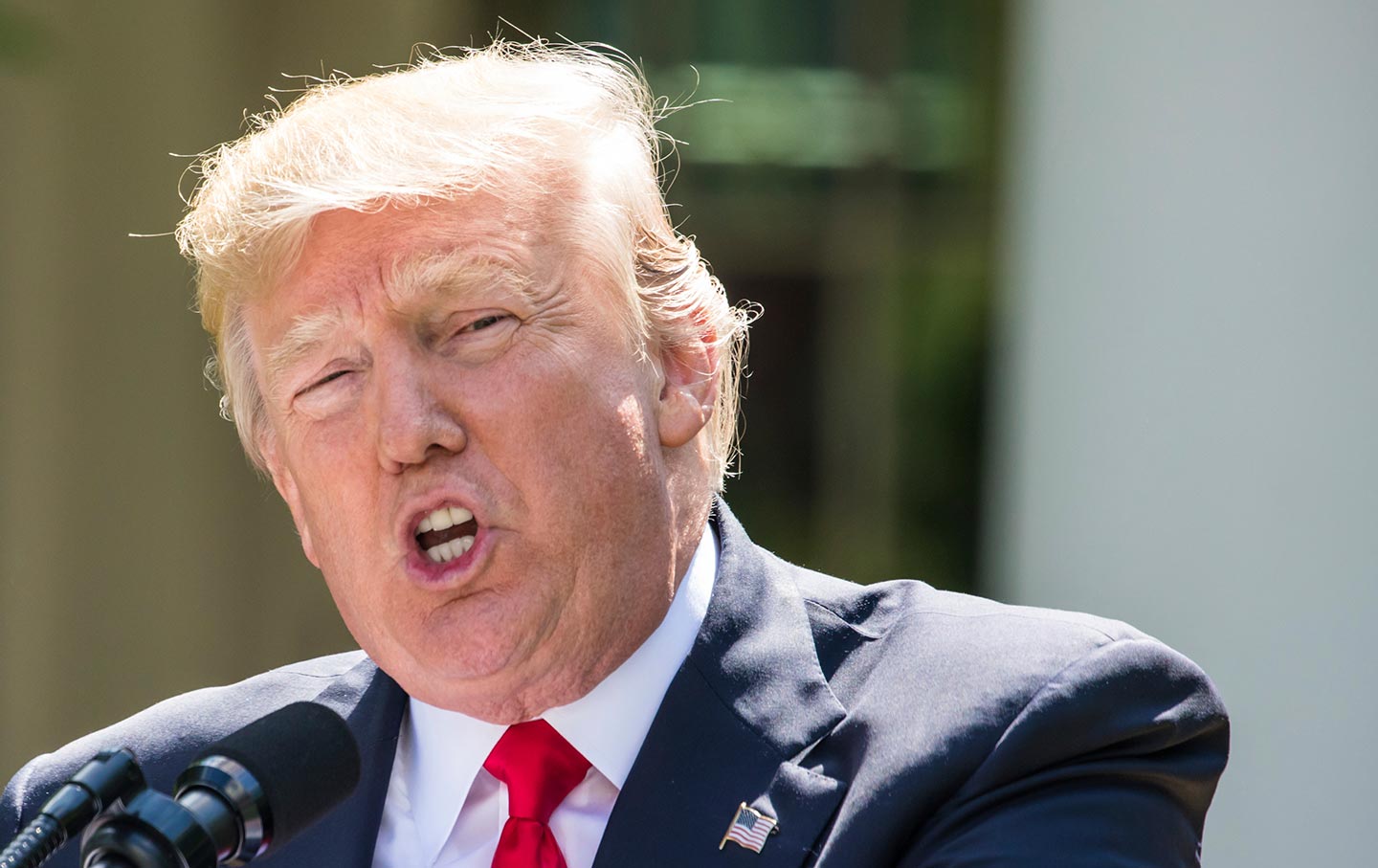 On September 30, 1942, shortly after the death camps began gassing Jews, Hitler declared, “In Germany too the Jews once laughed at my prophecies. I don’t know whether they are still laughing, or whether they have already lost the inclination to laugh, but I can assure you that everywhere they will stop laughing. With these prophecies I shall prove to be right.”

Five weeks later, he declared, “Today countless numbers of those who laughed at that time, laugh no longer. Those who are still laughing now, also will perhaps laugh no longer after a while.”

On June 1, 2017, Donald Trump announced that he was pulling America out of the Paris climate accord. “At what point does America get demeaned? At what point do they start laughing at us as a country? We want fair treatment for its citizens and we want fair treatment for our taxpayers. We don’t want other leaders and other countries laughing at us anymore, and they won’t be. They won’t be.”

It’s not a direct quote from Hitler, but it’s perilously close.

Throughout Trump’s presidential campaign last year, he was dogged by rumors that he kept a book of Hitler’s speeches on his bedside table. Several of his appointees have links to far-right, neo-Nazi organizations. He has, time and again, retweeted white-nationalist and fascist tweets. He struggled to disavow support from arch-racist and former KKK leader David Duke. And his Svengali, Steve Bannon, is obsessed by nationalism and seems nostalgic for a sort of Third Reich world, in which powerful nations and races impose their might on helpless, and thus rights-less, nations and races.

That Trump essentially used the Rose Garden podium yesterday to give a giant “Fuck you” to the rest of the world is bad enough. But that he paraphrased Hitler in so doing raises a stench that even the cretins who head the Republican Party ought to blanch at. Trump will, I am sure, deny any intended overlap with Hitlerian language. But, as a longtime journalist I know that my editors would red-flag an unattributed quote like this; and as a lecturer in journalism, I know that were a student of mine to try to pass such words off as original, they would be flying perilously close to a plagiarism citation.

There are other passages that seem to borrow, at least thematically, from some of Hitler’s speeches. For example, “The Paris Agreement handicaps the United States’ economy in order to win praise from the very foreign capitals and global activists that have long sought to gain wealth at our country’s expense. They don’t put America first. I do, and I always will.”

There are other passages that seem to borrow, at least thematically, from some of Hitler’s speeches.

It’s not a huge leap from this passage to one from a speech that Hitler gave to party loyalists in Munich on February 24, 1941: “It is intolerable for us to be the puppets of other nations and to have them prescribe for us, for example, what economic policy we are to pursue. We are carrying out the economic policy which is most advantageous to the German people.”

So, just to reiterate what has unfolded over the last days: The most powerful man on earth, the man in charge of a nation that has claimed to “lead the free world” since the end of World War II, just echoed language from the Nazi Führer in explaining why he was putting a wrecking ball to one of the most important international agreements in decades.

I’m sure Trump will find equally poetic language to use if and when he storms out of the United Nations, perhaps when international leaders critique his decisions in that forum rather than praising them as he seems to expect. After all, his oratorical mentor managed to throw quite a theatrical tantrum when taking Nazi Germany out of the League of Nations.