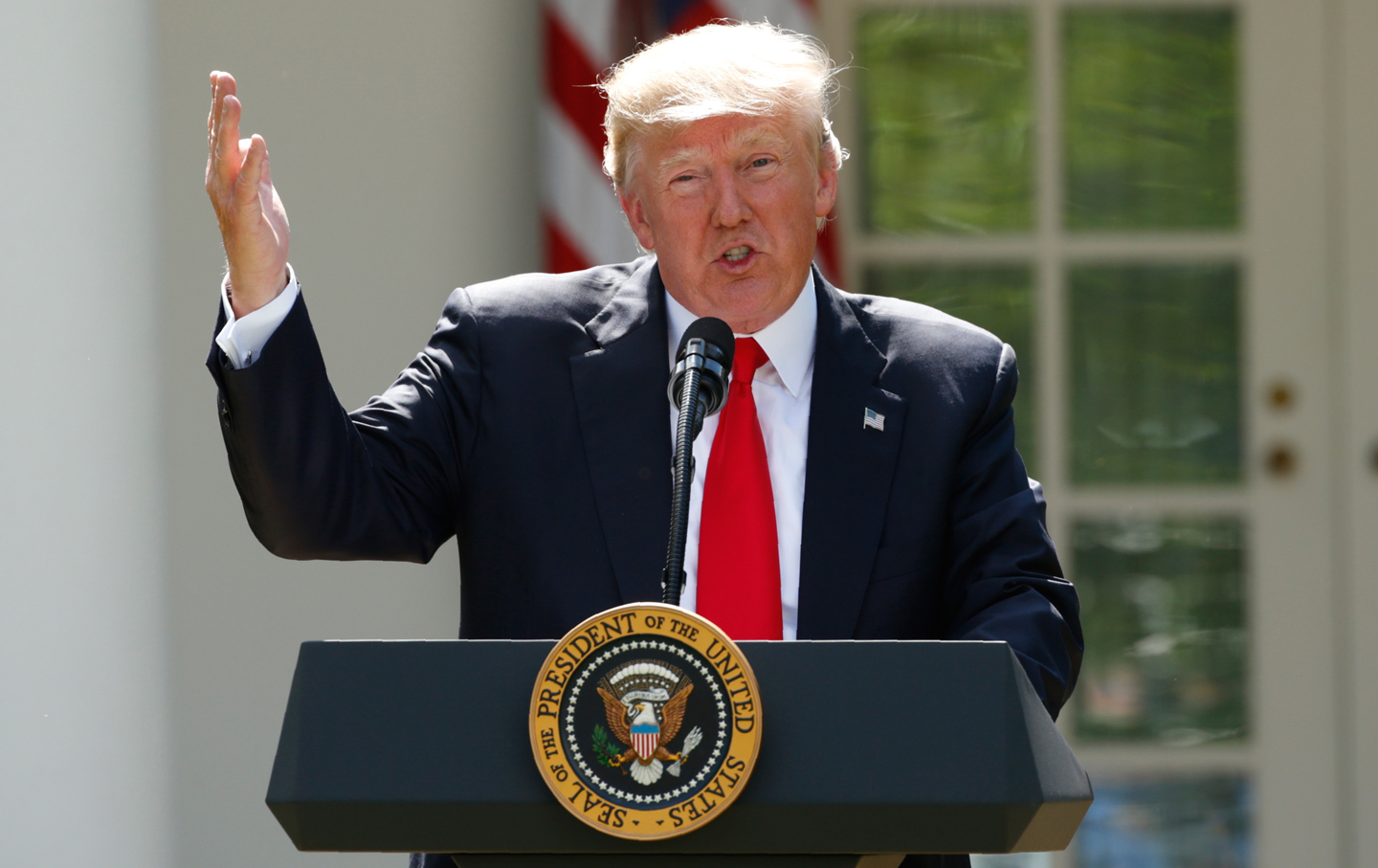 Donald Trump announces that the US will withdraw from the Paris Agreement, June 1, 2017. (Reuters / Kevin Lamarque)

President Donald Trump confirmed his status as climate denier in chief on June 1, guaranteeing his place in history as an enemy of both science and humanity. Trump’s withdrawal of the United States from the Paris Agreement on climate change will not stop the rest of the world from continuing to advance toward a clean-energy future. Solar, wind, batteries, and other technologies are growing tremendously fast, rewarding investors and employing far more people than the heat-trapping fuels of the past. Three million Americans now work in the clean-energy sector, more than are employed in the oil, gas, and coal industries combined. California Governor Jerry Brown, who heads the world’s sixth-largest economy and a hot spot of green-energy innovation, insisted that Trump’s efforts are doomed to failure. “The momentum is all the other way,” said Brown, “and I think Trump, paradoxically, is giving climate denial such a bad name that he’s actually building the very [climate-action] movement that he is [purporting] to undermine.”

Let’s hope so. Hours after Trump’s speech, Brown joined the governors of New York and Washington (later joined by nine other states as well as Puerto Rico) in establishing the United States Climate Alliance, which pledges to continue to adhere to the Paris Agreement. Michael Bloomberg, the former New York mayor who now serves as a climate envoy for the United Nations, is organizing city governments, businesses, and universities across the country to join with these states. Together, Bloomberg argues, their actions can still deliver the emission reductions that the United States pledged in Paris, despite the federal government’s retreat.

But no one should pretend that it does not matter when the world’s biggest economy rejects an agreement that puts unprecedented international support behind ambitious climate action. By removing the rules and regulations that require polluters in the United States to change their ways, Trump’s repudiation of the Paris Agreement will slow progress at the very time when humanity’s survival requires faster action than ever.

“Crimes against humanity” is a phrase to use with caution, but it fits Trump’s repudiation of the accord—and, indeed, his entire climate policy. Timothy Wirth, who as the under secretary of state in the Bill Clinton administration negotiated the 1997 Kyoto Protocol, which sought to limit global warming, has said that those who deny the well-established science of climate change “ought to be tried for crimes against humanity.” Wirth told The Nation after Trump’s withdrawal from the Paris accord that he stood by his remark, adding that the president’s action was “a stunning moral abdication of responsibility to future generations.” To refuse to act against global warming is to condemn thousands of people to death and suffering today and millions more tomorrow. This is murder, even if Trump’s willful ignorance of climate science prevents him from seeing it. History will not be so forgiving.

Of course, the Paris Agreement is far from perfect: Its emission reductions are voluntary and do not go far enough, at least not yet. Nevertheless, the accord commits the world’s governments to leave behind oil, gas, and coal by midcentury—a historic shift. It commits them to limit the global temperature rise to 2 degrees Celsius, which scientists say is the maximum compatible with civilization as we know it, and to aim for the 1.5°C limit that poor and island nations rightfully regard as essential to their survival. Thus, the accord provides citizens, activists, and the rest of civil society worldwide with a strong mandate to hold governments and corporations to account.

Thanks largely to such pressure from civil society, reinforced by the growing recognition of global elites that the climate crisis is indeed dire, the Paris Agreement has already accelerated real climate progress. Some of the greatest change is under way in China, which is rapidly shutting down coal plants and mines and adding solar and wind plants, notwithstanding Trump’s shameless lies at the White House about China’s supposed inaction. Meanwhile, the leaders of China and the European Union announced the day of Trump’s speech that they remained committed to the Paris Agreement and plan to intensify their cooperation on clean energy, a huge and growing global market that US businesses will now find harder to navigate. So much for “America first.”

Remarkably, Trump refrained from repeating his favorite falsehood about climate change—that it is “a hoax” invented by the Chinese to undermine the US economy. Perhaps his aides have learned this much: Although fooled for decades by the disinformation campaigns funded by such corporate polluters as ExxonMobil and voiced by Republicans in Congress, a majority of Americans now realize that climate change is real, caused by humans, and dangerous. Trump instead portrayed his withdrawal from the Paris Agreement as a matter of economic fairness and patriotism, of standing up for American workers, businesses, and taxpayers who, he said, are being taken advantage of and, worst of all, laughed at by foreigners who foisted a “very unfair” deal on the hapless negotiators of the Obama administration.

This narrative, however, ignored what is now a truism within the business press and financial class: The jobs, profits, and market opportunities of the future are in clean energy—not in oil, gas, and coal. Indeed, the day before Trump’s announcement, the shareholders of ExxonMobil delivered a stunning rebuke to the oil giant’s management: By a 62 percent majority, they voted to require the company to produce annual reports on how it will remain profitable in a future after governments and science limit oil and gas production. There are profits aplenty to be had: The new book Drawdown describes scores of climate-friendly practices and technologies that already make more money than they cost and only need to be accelerated and scaled.

But make no mistake: Trump’s speech was climate denial with a vengeance. At this point in the climate crisis, the science is terrifyingly clear. Global emissions of heat-trapping gases must peak by 2020 if the 1.5°C target is to remain feasible, by 2030 for the 2°C target. Physics does not compromise; it does not do the deals so beloved by Trump. And that means pledging to unleash America’s “abundant energy” sources—by which, Trump implied, he meant oil, gas, and coal—will make it immensely more difficult to honor those temperature targets, even if the rest of the world continues galloping forward.

In human terms, this increase in US energy production will mean more of the killer cyclones that killed hundreds of people and left hundreds of thousands homeless in Bangladesh and Sri Lanka just days before Trump’s speech. It will mean more massive storms like Hurricane Sandy, which leveled vast parts of New York and New Jersey days before the 2012 presidential election and inspired the Bloomberg Businessweek cover headline: It’s Global Warming, Stupid! It will mean that the extinction crisis that has already claimed countless plant and animal species will intensify, further impoverishing the planet both ecologically and spiritually. All of this is a crime against humanity—and against the planet we call home.