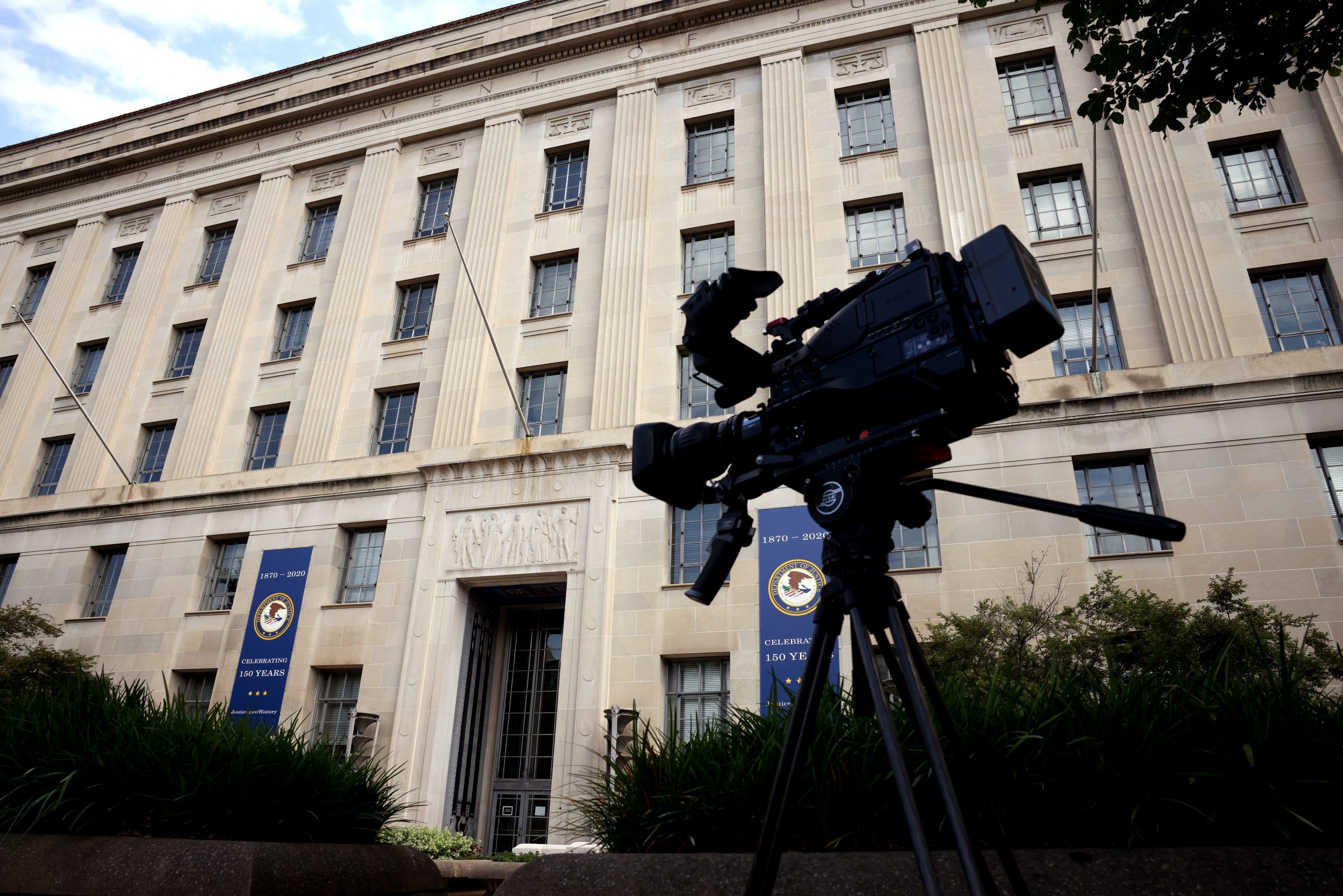 A television camera outside the US Department of Justice where Attorney General Merrick Garland is expected to meet with media executives following news that Trump's Justice Department attempted to obtain email and phone records from journalists. (Kevin Dietsch / Getty Images)

Always remember—since he won’t go away, we have to stay sharp—that Donald Trump is a master of projection. He accuses others of misdeeds that are his own. Back in 2017, he accused President Obama of “wire tapping” Trump Tower during the presidential race—federal investigators said that never happened—and went on to make other claims, through 2020, that his Democratic predecessor had “spied on” his campaign. Obama had not.

Now, we are learning that Trump’s Justice Department gathered communications-data records of reporters, Congress members, and congressional staff (along with family members, including at least one juvenile), allegedly to investigate intelligence leaks. On Sunday, The New York Times reported that just last month Apple told Trump’s own White House counsel Don McGahn that his boss’s top legal guns sought the records of not only McGahn but also his wife back in early 2018. On Monday, a Trump holdover in the DOJ’s national security division, John Demers, announced that he will leave his job at the end of the week. The move was long planned and is not necessarily connected to these subpoena controversies. But it could be.

What the hell was going on here?

The mysterious investigations began under Attorney General Jeff Sessions but were reauthorized under William Barr. And yet both AGs deny knowledge of the subpoenas for information or the probe behind them. Then–Deputy AG Rod Rosenstein does too. On CNN’s State of the Union Sunday, House Speaker Nancy Pelosi said she found that hard to believe. “How could it be that there could be an investigation of members in the other branch of government and the press and the rest too and the attorneys general did not know?” she said. “So who are these people and are they still in the Justice Department?” Pelosi said all three men should have to testify to Congress on these questions, under oath, but so far it’s not clear who is making that happen.

According to a Times report on Thursday, Trump’s DOJ subpoenaed data records for House Intelligence Committee chair Adam Schiff and prominent member Representative Eric Swalwell, as well as for their staff and at least one minor child. Whoever authorized it, the fishing expedition is largely believed to stem from Trump’s crusade to expose whoever shared information about his felonious former national security adviser Michael Flynn’s conversations with Russian leaders.

The McGahn subpoenas could stem from reporting around the same time indicating that McGahn resisted Trump’s appeals to fire Mueller. While that was a major takeaway from the Mueller report, it was also a feature of New York Times and Washington Post exposés about the same tension within the administration. It could also be related to the Flynn-Russia stories. And it could be about something else entirely; the Times story, while intriguing, was also maddeningly opaque.

These reports are alarming in themselves. But they also serve to remind us that Congress is mostly failing to investigate Trump-era abuses. Sure, Republicans are mostly to blame—killing a January 6 commission many once seemed to support is only part of it. On the other hand, Democrats control the House and Senate, however narrowly. There should be a high-profile Trump investigation in every oversight committee in Congress. DOJ Inspector General Michael Horowitz has already indicated he will open an investigation into the mess, and on Monday morning Attorney General Merrick Garland formally requested that he do so.

But oversight can’t stop there. Despite Pelosi’s Sunday statements, reaction to these rolling DOJ disclosures has seemed strangely muted. Famed Watergate witness John Dean called it “Nixon on stilts and steroids,” telling CNN the scandal could turn out to be worse than Watergate because “Nixon didn’t have that kind of Department of Justice.”

So what kind of Department of Justice did Trump have? Did he have loyal minions operating without the knowledge of the department’s leadership, let alone their supervision? It’s unlikely, but possible. At minimum, Barr, Sessions, and Rosenstein have to tell Congress what they knew or didn’t know about these investigations. It sure looks as though Trump used the Justice Department in the way he falsely claimed Obama did, to target political enemies. Congress must work harder to figure out how bad it got.