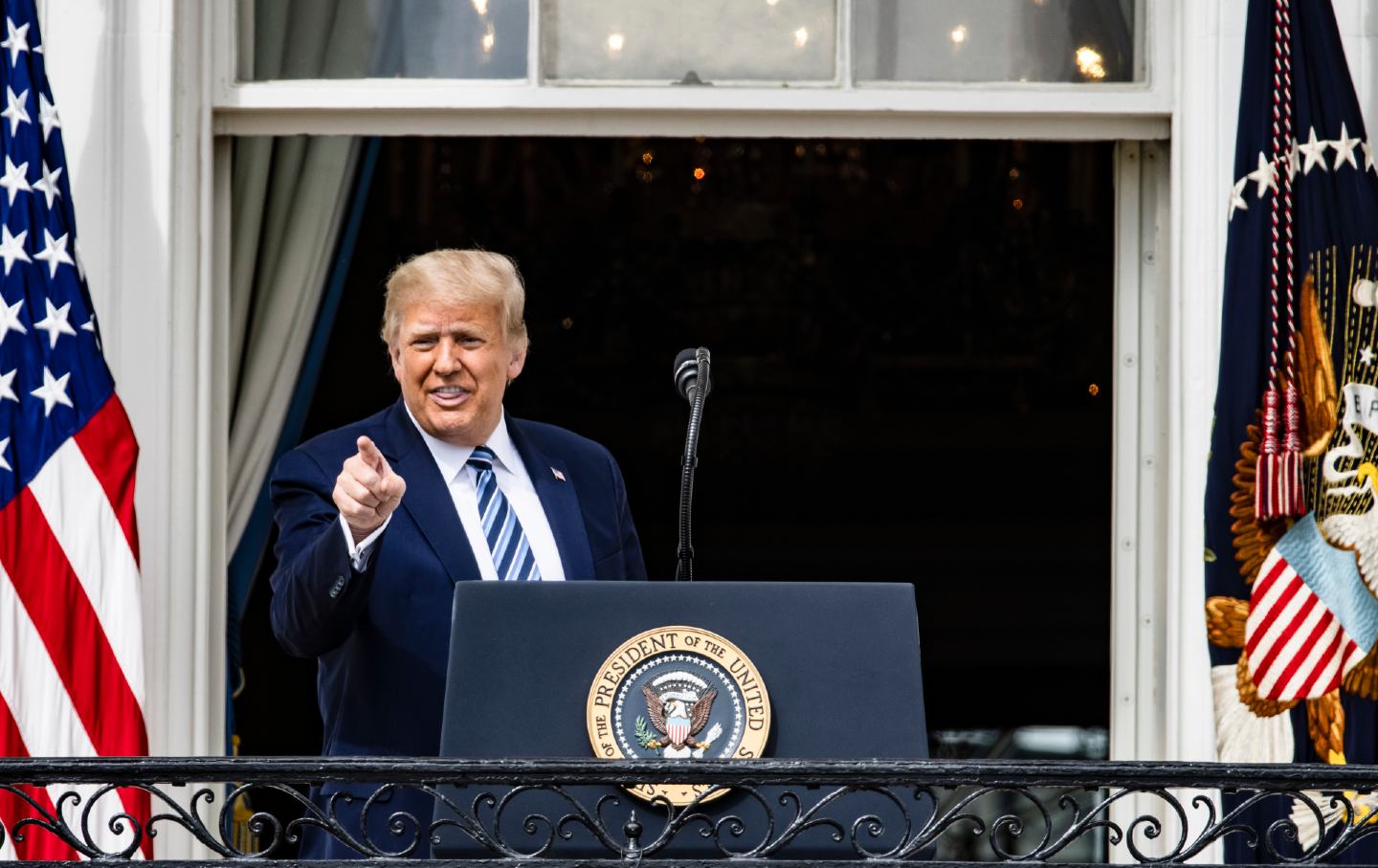 Donald Trump addresses supporters at a rally on the South Lawn of the White House on October 10, 2020. (Samuel Corum / Getty Images)

The best thing a snake oil salesman can have going for him is a personal story, especially one he himself believes. If you can tell with conviction a tale about how you were stricken by a near-fatal disease—and then miraculously cured—a whole world of possibilities opens up for winning over the gullible.

Donald Trump has long been a con man, with his entire business career built on shady enterprises, hype, and impossible-to-deliver promises. When he shifted to politics, he continued being a fraudster, winning support by lies like birtherism and fantasies like the border wall that Mexico would pay for. In February 2016, Marco Rubio denounced Trump as a “con artist.” But it’s a measure of Trump’s success that Rubio, like most other Republican luminaries, soon ended up endorsing Trump. The ultimate triumph of a mountebank is getting the support of people who know they are being swindled.

Thanks to his recent struggles with Covid-19, Trump can now turn his con game into a personal narrative that goes beyond the fictional financial success he has touted in the past. Seemingly on the path of recovery with the help of an experimental antibody cocktail developed by Regeneron Pharmaceuticals, Trump can sell a personal story that touches even closer to the heart: a narrative of triumphing over death itself.

On Saturday, White House physician Dr. Sean Conley released an optimistic but hedged memo saying Trump had been “fever-free for well over 24 hours and all symptoms improved” and could now end isolation. The statement did not, however, say Trump had received a negative test for Covid-19. Nor has the public been told when Trump’s last negative test was.

Playing off Dr. Conley’s taciturn and ambiguous statement, Trump has been arguing that he’s near a full recovery. On Sunday, he phoned Fox News and said, “It seems like I’m immune.” Taking a swipe at Joe Biden, Trump added, “So I can go way out of a basement—which I would have done anyway and which I did because you have to run a country, you have to get out of the basement—and it looks like I’m immune for, I don’t know, maybe a long time, maybe a short time.” Trump claimed he had a “protective glow.”

In the same call, Trump implied that Biden is sick with Covid-19. “If you look at Joe, he was coughing yesterday horribly and grabbing his mask, as he’s coughing,” Trump asserted. “And I don’t know what that was all about, and it didn’t get much press.”

Later that day, Trump tweeted, “A total and complete sign off from White House Doctors yesterday. That means I can’t get it (immune), and can’t give it. Very nice to know!!!” Twitter flagged the tweet for violating its rules against spreading misinformation about Covid-19. The simple fact is, even someone who has recovered from Covid-19 can’t claim to be immune, since we don’t know yet how long immunity lasts. Further, there’s no reason to think Trump has recovered.

On Sunday morning, Eric Trump went on ABC’s This Week and claimed that his father was cured by “vaccines” he had helped create. “It goes to speak how good some of these vaccines that are being created are and what my father’s done on the vaccine front no one could have done,” the presidential offspring said. “My father literally started day one creating this vaccine, he worked to push this vaccine and now my father just took it and you see how well he got over it.”

Needless to say, Eric Trump is talking nonsense. The elder Trump was never given a vaccine. He received treatment with therapeutic medicines, which, although they seem to have helped to alleviate his condition, are not cures.

Significantly, Leonard Schleifer, the CEO of Regeneron Pharmaceuticals, threw cold water on such hype about the experimental cocktail his firm developed. “The president’s case is a case of one, and that’s what we call a case report,” Schleifer told CBS News. “And it is evidence of what’s happening, but it’s kind of the weakest evidence that you can get.”

Schleifer’s caution is salutary, but, as Eric Trump’s words indicate, is unlikely to be heeded by the Trump campaign. With a little over three weeks left in the election, Trump needs a miracle to help close the polling gap with Biden. A heartfelt personal story about being saved from death is perfect for Trump’s final push.

As Axios reports, “President Trump has asked his campaign to put him on the road every single day from now until Nov. 3.… His team is in the process of scheduling events to make that happen, two sources familiar with the discussions tell Axios. But not everyone thinks this is a good idea. One adviser said, ‘He’s going to kill himself.’”

A sick and still recovering president killing himself campaigning would be a national tragedy, but it pales in comparison to the many more people he can kill with his antics. If Trump and surrogates like son Eric push a narrative of a miraculous recovery through the experimental cocktail (or fictitious “vaccines”), the consequences could be dire. Millions of Trump followers would be emboldened to ignore social distancing and masking rules because they’ll have false confidence in a nonexistent cure.

At a rally in Panama Beach, Fla., a Trump supporter named Diane Vitale told the AP she’s not worried about Trump: “He’s strong. He’s beyond human.” She added, “COVID will disappear on Nov. 4. It’ll be gone. You see me? I’m 74 years old. I’m not wearing a mask. I don’t believe in any of that.”