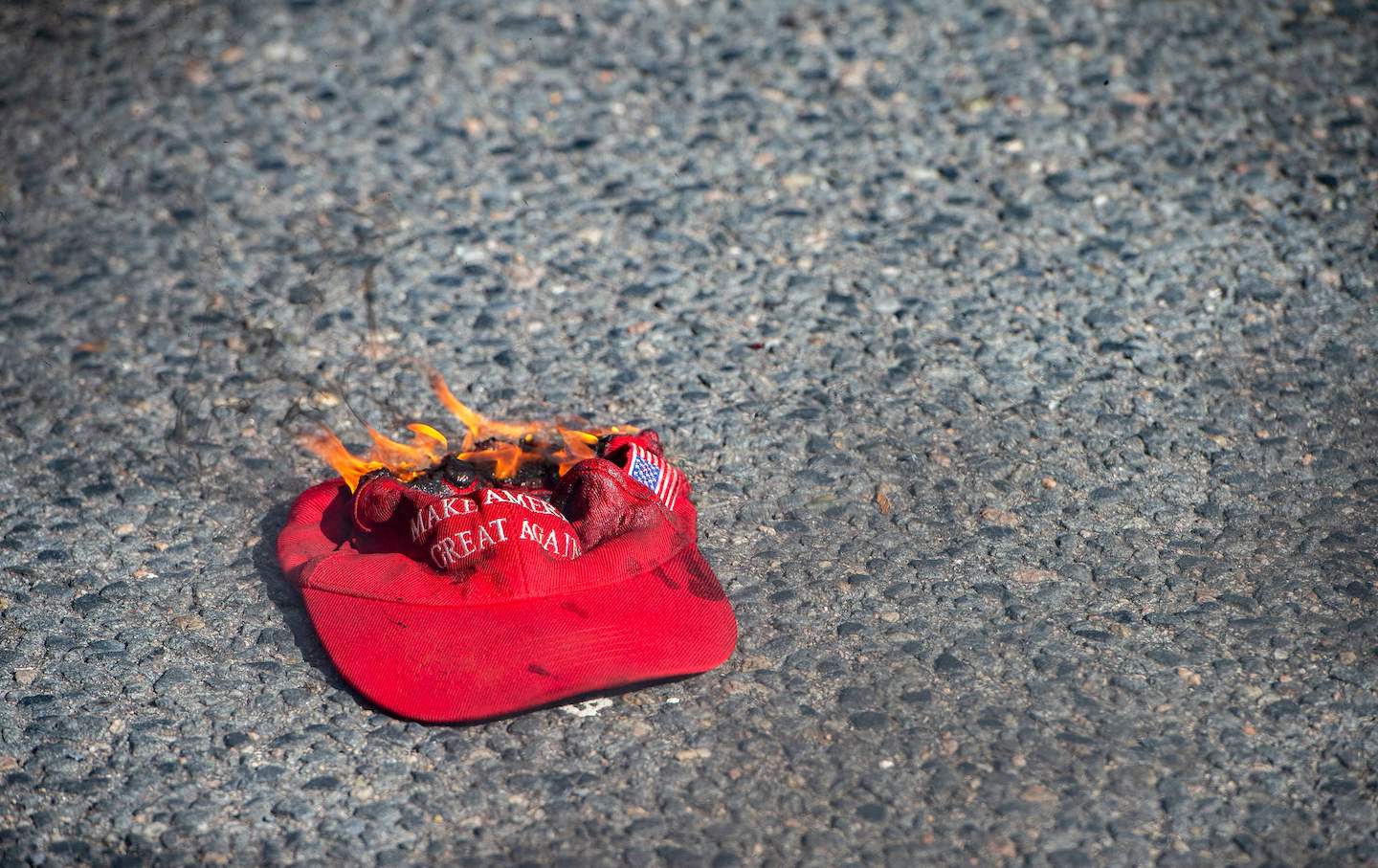 A MAGA hat is seen on fire during a protest in Copley Square in Boston, Mass. (Joseph Prezioso / AFP)

My Uncle Harry has seen it all, and he has the years to prove it: He turned 100 on November 1. (In case you were wondering, he attributes his longevity to family, love, curiosity, and ice cream every day.) When Donald Trump was elected, Uncle Harry predicted that the next four years would be awful but there would be only two things that couldn’t be undone even if the Democrats won in 2020: the destruction Trump would wreak on the environment and the justices he would put on the Supreme Court.

Trump has more than fulfilled Uncle Harry’s predictions. On the environment, Trump has taken the United States out of the Paris climate accord—it seems so long ago!—which he called a “disaster.” He scrapped Obama-era carbon emissions cuts, relaxed regulations for clean air, weakened protections for marine life and endangered species, opened public lands to mining and logging (including two national monuments, Utah’s Bears Ears and Grand Staircase–Escalante, designated by Barack Obama and Bill Clinton, respectively), and much more. At every step, Trump has shown contempt for nature, from the humble sage grouse, whose habitat is no longer protected from mining and drilling, to our rapidly heating planet.

Fortunately, some of Trump’s plans have been tied up in court, but that’s no guarantee. As Uncle Harry warned and the whole world knows, the courts have been Trumpified. Trump’s three Supreme Court appointments (Neil Gorsuch, Brett Kavanaugh, and Amy Coney Barrett) are so far to the right that Chief Justice John Roberts is now a centrist. And in a court with six conservatives, Roberts’s vote may not be needed to inflict grave damage on women’s rights, workers’ rights, civil rights and civil liberties, LGBTQ rights, and of course, voting rights. Can it be that what we naively considered our way of life—that long arc of the moral universe that slowly bends toward justice—could be so easily bent back by simply anointing three young, energetic reactionaries? Gorsuch is a sprightly youth of 53, Kavanaugh is a 55-year-old beer aficionado, and Barrett is only 48. This trio will be dancing on the graves of many of you reading this, to say nothing of myself, assuming Barrett’s male-supremacist tongues-speaking Christian cult permits women to dance. That Ruth Bader Ginsburg, an architect of women’s legal equality, should be replaced by a Federalist Society fembot who thinks abortion is barbaric and wives should obey their husbands is surely no accident. As House Judiciary Committee Republicans tweeted when Barrett was confirmed, “Happy Birthday, @HillaryClinton!”

Uncle Harry didn’t mention the lower courts, but let’s not forget that Trump has nominated and the Senate has confirmed 218 federal judges to lifetime appointments; that’s a quarter of the federal judge total. A large majority of them are white men; fewer than 5 percent are African American. Of the nine nominees rated “not qualified” by the American Bar Association, seven were confirmed. Needless to say, they veer hard conservative. Regardless of who wins the White House, we will be living with their judgments for a long, long time. 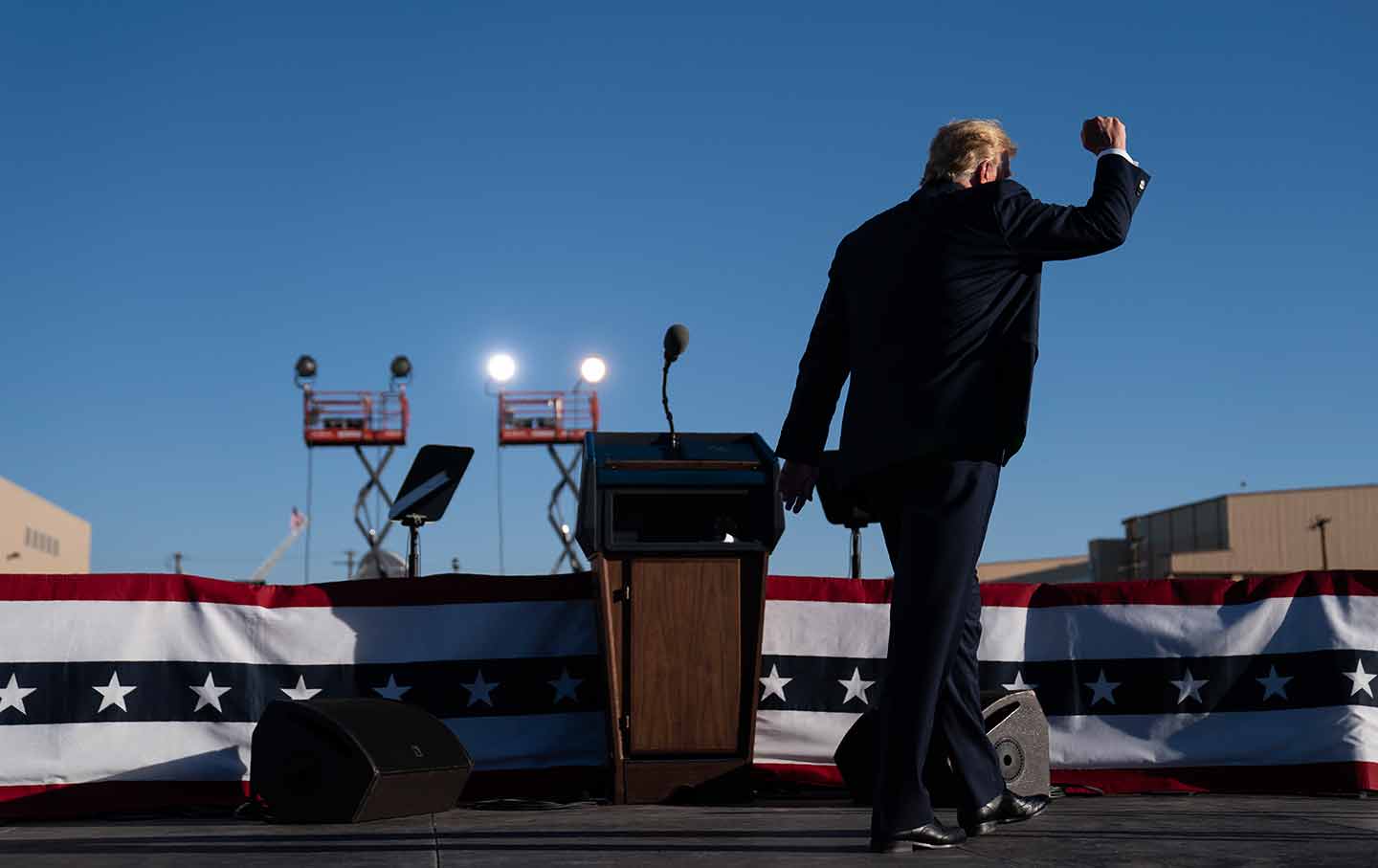 The Trauma of Trump’s Presidency Will Haunt Us

There are surely many other doings of the Trump administration that can’t be put right. The trauma migrant children have suffered at the border will be with them for life, especially the 545 whose parents the government has admitted it can’t find and has thus effectively orphaned. In The Washington Post, Catherine Rampell has a long piece detailing the legal and bureaucratic measures by which Trump has halved legal immigration in ways that will be hard to roll back.

For me, though, the hardest thing to reverse is something more nebulous and disturbing: the way Trump has corrupted our understanding of truth and facts and simple human decency. He has turned the most ordinary commonsensical aspects of life into battlefronts in a ridiculous culture war—even wearing a mask to protect yourself from a potentially fatal disease. And no matter what Trump said or did, around four in 10 Americans stood right there with him. Nothing seemed to dent their support: not the boasts and bullying, not the disgusting insults against women, not the shout-outs to xenophobes and white supremacists and neofascists, not the crude belittling of anyone who disagreed with him, from journalists to Dr. Anthony Fauci. No matter what preposterous charges he throws out at his rallies (recently he claimed that doctors have inflated the number of Covid-19 deaths because they get more money if they attribute a death to the coronavirus), he manages to top them in short order. But his followers remain steadfast, even apparently unto death, according to a new Stanford University study linking his rallies to some 30,000 Covid cases and 700 deaths. They may not believe or like everything he says, but they don’t care; that’s just Donald being Donald, or as evangelicals have described him, King Cyrus being King Cyrus.

Trump has turned us into a nation of braying bullies and conspiracy theorists and mean people proud of their indifference to the suffering of others. Maybe that’s what too many Americans always were, but they kept it under wraps for fear of social disapproval. That’s what “locker room talk” means, after all: Boasting about pussy grabbing is fine; just don’t do it where women can hear you. Still, I can’t remember a time when batshit paranoid fantasies like QAnon could infect the minds of so many people, including a newly elected member of Congress. Or when far-right militiamen took guns to state capitols and planned to kidnap and murder a governor. Or when cars and trucks bearing the flags of one candidate tried to push the campaign bus of the other candidate off the road, as Trump’s minions recently did in Texas, only to be given a thumbs-up by the man in the White House. Maybe I’ve led a sheltered life.

Joe Biden and Kamala Harris have carried the day, but those four in 10 aren’t cheerfully bounding up to the net for a hearty handshake over a game well played. We may rid ourselves of Trump. But Trumpism? That will be with us for the rest of Uncle Harry’s life and mine and maybe yours as well.