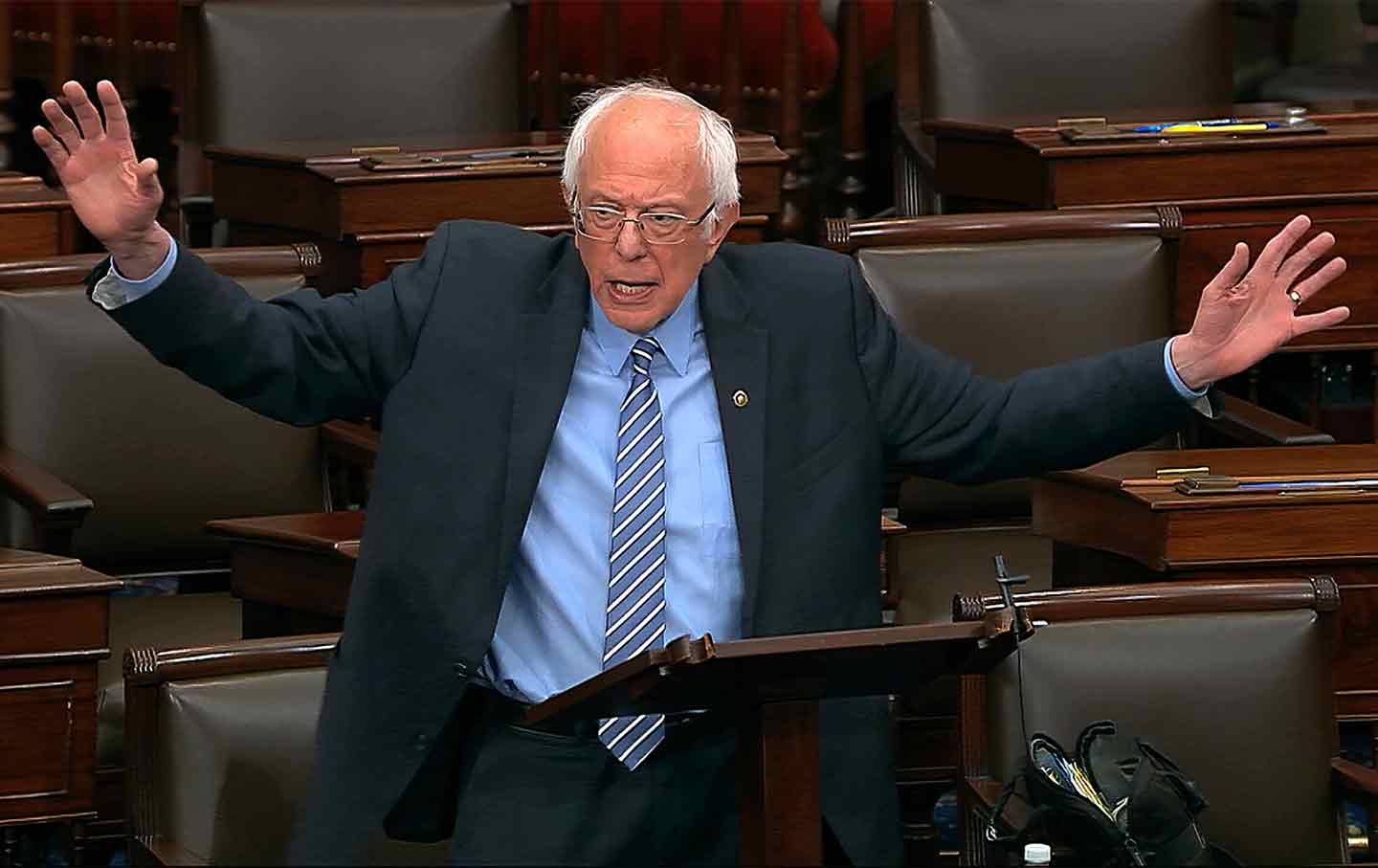 Republicans are using the coronavirus outbreak as an excuse to do the same thing they did during the financial meltdown of 2008: wage class war against working Americans. This time, Bernie Sanders is refusing to let them get away with it.

Employing a combination of moral outrage and devastating sarcasm, the Vermont senator shamed Republicans in a Wednesday Senate floor speech that ripped into them for prioritizing corporate bailouts while objecting to providing a measure of security for low-wage workers who have lost their jobs as much of the American economy has ground to a near halt.

“How absurd and wrong is that? What kind of value system is that?” demanded Sanders, as he railed against a Republican amendment that would have constrained benefits at a time when the unemployment rate is skyrocketing. Even in the midst of the crisis, the senator thundered, “Some of my Republican friends have still not given up on the need to punish the poor and working people.”

In a matter of minutes, during a debate that focused on just one portion of a huge measure, Sanders illustrated how an opposition party is supposed to operate, and what it’s supposed to sound like. Refusing to let Republicans peddle the nonsense that invariably serves as a cover for the awful combination of bailouts for the wealthy and austerity for the working class, Sanders pushed back.

It was a fight Sanders expected to win, but it was the way he fought it that mattered: He hit as hard as the Republicans. And he claimed the moral high ground—inspiring the hashtag #ThankYouBernie to trend on social media as the Rev. Dr. William J. Barber II wrote, “#ThankYouBernie for pointing out the immorality of Republicans funding big business & trying to strip out the few things in the bill to help poor & low income workers.”

Former senator Heidi Heitkamp, a moderate Democrat from North Dakota, circulated a video of the speech with the message, “I may not always agree with @BernieSanders but this is @BernieSanders at his very best. You go, my friend!”

Whether Sanders continues his bid for the Democratic presidential nomination as he trails former vice president Joe Biden or whether he folds at some point, his speech this week signaled that the senator will remain a transformative figure in the politics of the Democratic Party and the United States.

The fight that Sanders joined goes to the heart of concerns about the federal response to economic dislocation caused by the coronavirus pandemic. There is broad bipartisan agreement that Congress must move decisively to fund an urgent response. But there is a good deal of disagreement about how to respond to the economic fallout as states lock down in order to slow the spread of the deadly virus. There is a good deal of concern that the legislative process will be gamed by Republicans—and perhaps some Democrats—who are as inclined to bail out Wall Street in 2020 as they were in 2008. The wrangling over the Senate bill highlighted those concerns.

We Can Still Save the US From Becoming a Failed State

For DeVos, the Pandemic Is Another Opportunity for Profit

The $2 trillion relief package that the Senate approved Wednesday night does everything imaginable, and a few things that are unimaginable, for big business. The 880-page measure allocates $425 billion to create a fund controlled by the Federal Reserve, which permits massive loans to corporations. In addition, it makes $75 billion available for loans targeted to aid the airline and hotel industries.

The legislation is so friendly to big business that, even after it was reported on Thursday morning that a record 3.28 million people had filed for unemployment benefits, the Dow Jones surged because, as one analyst told CNBC, “the focus by the market now is on the fact we’re likely to get a historically large fiscal stimulus.” The wolves of Wall Street are excited by what economist Dean Baker correctly identifies as “the $500 billion slush fund that McConnell has made a centerpiece of the Senate bill.”

The measure would have been dramatically worse had Republicans not been faced with the reality of a divided Congress and the interventions of Senate minority leader Charles Schumer and his caucus, which fought for more than $100 billion for hospitals, $150 billion dollars for state and local government, $30 billion in emergency education funding, $25 billion in emergency transit funding, vital initiatives for small businesses, and anti-corruption initiatives that Schumer said were toughened with the aid of Massachusetts Senator Elizabeth Warren. The Democrats celebrated a plan providing direct payments averaging $1,200 for individuals and $2,400 for couples, as well as what Schumer dubbed “unemployment insurance on steroids.”

The package, as it was agreed to by Senate negotiators, featured a section—which Sanders and other progressives had championed—that supercharged unemployment benefits by promising out-of-work Americans up to four months of weekly unemployment checks from the states where they live and an additional $600 a week in benefits. It also established a new Pandemic Unemployment Assistance program to provide benefits to gig workers and the self-employed.

This level of care for vulnerable workers disturbed Republican Senators Tim Scott, Lindsey Graham, and Ben Sasse. Their objection? “Unless this bill is fixed, there is a strong incentive for employees to be laid off instead of going to work. This isn’t an abstract, philosophical point—it’s an immediate, real-world problem,” the senators claimed in a press statement, continuing:

If the federal government accidentally incentivizes layoffs, we risk life-threatening shortages in sectors where doctors, nurses, and pharmacists are trying to care for the sick, and where growers and grocers, truckers and cooks are trying to get food to families’ tables. This isn’t who we are as Americans; this isn’t what we do in a crisis. We must sadly oppose the fast-tracking of this bill until this text is addressed, or the Department of Labor issues regulatory guidance that no American would earn more by not working than by working.

Unless these Republican Senators drop their objections, I am prepared to put a hold on this bill until stronger conditions are imposed on the $500 billion corporate welfare fund to make sure that any corporation receiving financial assistance under this legislation does not lay off workers, cut wages or benefits, ship jobs overseas, or pay workers poverty wages.

When the Republican amendment was debated Wednesday, Sanders held nothing back.

“So now I find that some of my Republican colleagues are very distressed. They’re very upset that somebody who is making $10, $12 an hour might end up with a paycheck for four months [amounting to] more than they received last week,” raged the senator. Aiming sarcastic fury at the Republicans, he shouted:

Oh, my God, the universe is collapsing. Imagine that! Somebody is making 12 bucks an hour, now, like the rest of us, faces an unprecedented economic crisis with the 600 bucks on top of their normal, regular unemployment check might be making a few bucks more for four months. Oh, my word, will the universe survive?

Noting that “these very same folks had no problem a couple years ago voting for a trillion dollars in tax breaks for billionaires and large profitable corporations,” Sanders added, “But when it comes to low-income workers, in the midst of a terrible crisis, maybe some of them earning or having more money than they previously made—oh my word, we gotta strip that out.”

The Senate did not strip it out. The Republican amendment failed, and the objecting senators folded—joining the full Senate in voting for the overall bill.

What was striking, and what will be remembered, is that in this chaotic moment Bernie Sanders framed an urgent debate around the fundamental premise that “one thing we must not do is punish low-income workers.”