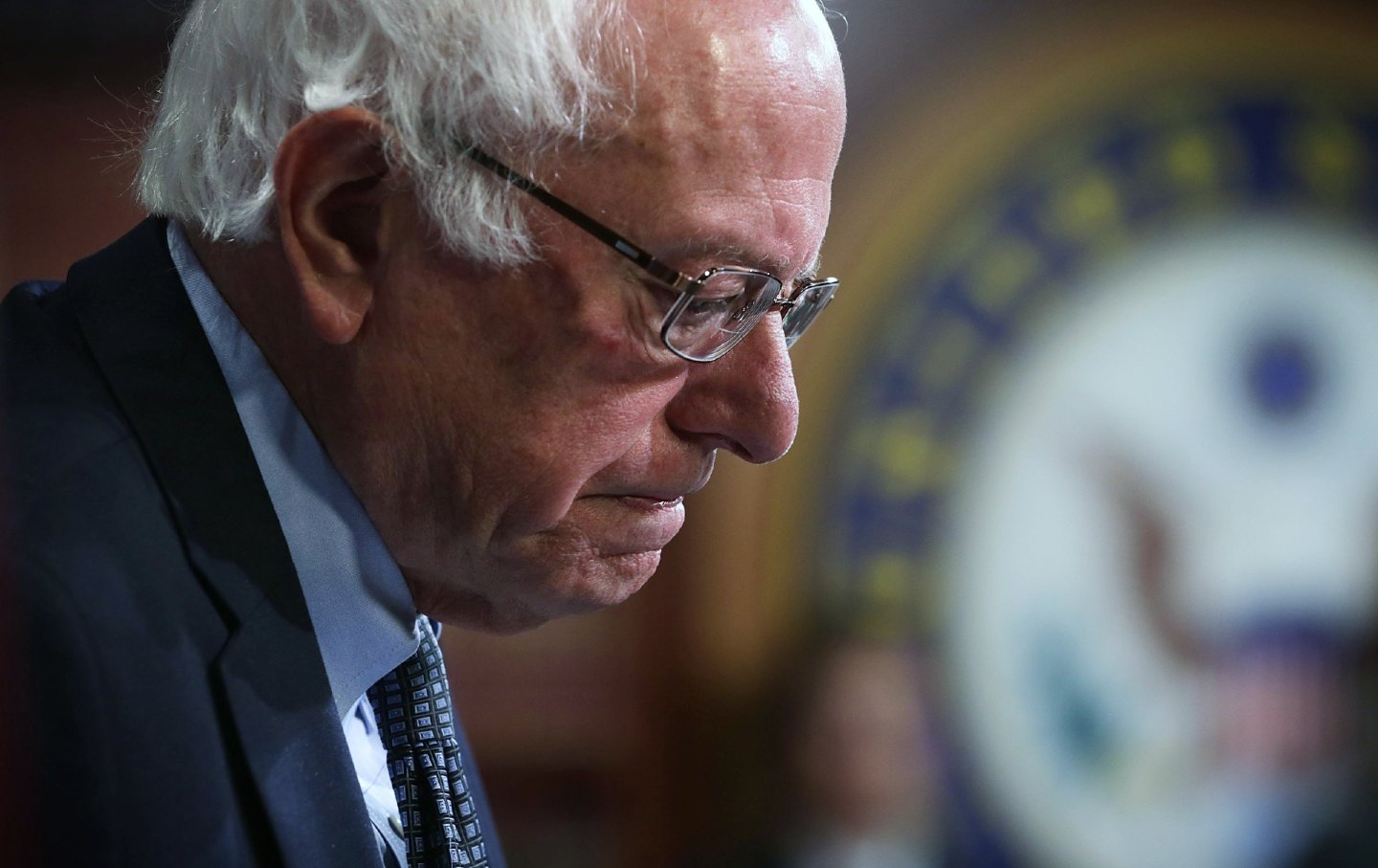 Bernie Sanders is at a crossroads, facing a tough choice about the future of his political movement. The coronavirus pandemic and the ensuing economic chaos it is bringing make Sanders’s program more urgent than ever. A pandemic is the strongest argument for universal health care. The severe recession that America is likely to endure in the coming months will exacerbate all the social problems that Sanders has spent his career fighting.

But if Sanders’s message is more resonant than ever, his presidential bid has stalled. He lost three more primaries on Tuesday night, in Arizona, Illinois, and Florida. Joe Biden is now close to having 300 more pledged delegates. Sanders faces a steep and unlikely path to victory, barring a radical change in events. Further, there’s an ethical dilemma that has been troubling the campaign: Is it justified to continue during the height of a pandemic, when voters are risking their lives to show up at polling stations?

A Sanders aide told Yahoo, “Tonight is hard and it’s also time for some hard decisions.”

It’s striking that the Sanders campaign released a video where the candidate didn’t talk about the election but focused instead on the pandemic. “Our country and our world are facing an unprecedented series of crises,” Sanders said. “We’re dealing with the coronavirus, which is spreading throughout this country and throughout the world. We’re dealing with a growing economic meltdown which will impact tens of millions of workers in this country.”

One path Sanders could follow is to continue fighting in the primaries. Even if he is sure to lose, he has a chance of going into the convention with 35-40 percent of pledged delegates. These delegates would be in a position, as Sanders delegates were in 2016, to reshape the party’s platform and its governing rules. Just as Sanders’s delegates helped push the party to the left in 2016, they could do so again. Having a large minority of the party behind him, Sanders could extract real concessions from Joe Biden, including possibly getting a progressive vice president.

But the coronavirus crisis Sanders alluded to opens up another possibility. Because there is an immediate need for a stimulus, Congress is more important than ever. Writing in Crooked Media, Brian Beutler spelled out the reason based on the experience from the 2008 crash: “The central political lesson of the financial collapse and great recession is that in dire economic circumstances, presidents and their parties are at the mercy of Congress. Without Congress’s help, crises persist, and the public blames the person at the top of the heap.”

In the current crisis, Trump is, in theory, at the mercy of congressional Democrats. Trump needs Democrats in both the House and the Senate to get any stimulus passed (Democrats are in a majority in the House, while in the Senate there are Republican holdouts who will make Democratic votes crucial).

Speaker of the House Nancy Pelosi and Senate minority leader Chuck Schumer have a strong set of cards, but they are playing them poorly. As Ryan Cooper explained in The Week, Pelosi engineered an economic stimulus that placed her to the right of Trump. “So far, the House has passed a small response bill, and negotiated a second response package with the White House, including a provision for sick leave that won’t cover up to 80 percent of American workers,” Cooper notes. “Speaker of the House Nancy Pelosi affirmatively defended the loopholes, saying she didn’t want to subsidize corporations. Then during a press conference Monday, Trump swung wildly to the left, saying in response to a question on sick leave that, ‘We want it for everybody.’”

Schumer, meanwhile, has offered not full-throttled economic populism but rehashed neoliberalism. On Tuesday, Schumer tweeted, “If you’re a small business owner suddenly facing cash flow problems, we would allow you to apply for low-interest loans and other forms of financial assistance that can offer relief quickly.” This might be a good policy, but hardly measures up to the scale of the problem. Even Schumer’s wording (“allow you to apply”) fails to convey any sense of an economic catastrophe.

Fortunately, the Democratic caucus has many members who are bolder than Pelosi and Schumer. Six Democratic senators and an independent (Michael Bennet, Sherrod Brown, Cory Booker, Chris Murphy, Brian Schatz, Richard Blumenthal, and Angus King) wrote a letter proposing sending disbursements of up to $4,500 (in installments) to every adult and child in the United States. The only problem with this proposal is that it is too short-term. It would be exhausted by the end of summer.

Sanders is well poised to take a leadership role in Congress during this crisis. His two presidential runs have made him a leader in the party, one respected even by those who vote for other candidates. He has an audience far larger than any other senator. Sanders also has proposals that are more substantial and far-reaching than any other politician’s.

On Tuesday, Sanders released his plans for dealing with the crisis, which include: free testing, treatment, and vaccines for the coronavirus; a $2,000-per-month cash payment for every person in America for the duration of the crisis; a moratorium on evictions; a suspension of mortgages, utility payments, and student loan debt payments; and no corporate bailouts.

This is an agenda for the current moment, not for when Sanders becomes president. It is aimed at Congress and could be pushed through right now. In a statement on Wednesday morning, Sanders’s campaign manager Faiz Shakir said, “The next primary contest is at least three weeks away. Sen. Sanders is going to be having conversations with supporters to assess his campaign. In the immediate term, however, he is focused on the government response to the coronavirus outbreak.” This suggests the campaign is aware that Congress is now a more important battlefield than the primaries.

Sanders has to decide where he wants to focus his political movement and his own energy and influence: on a continued fight in the primaries, or on the fights in Congress. Even if the presidency is out of reach, he’s uniquely positioned to provide the leadership Pelosi and Schumer have failed to deliver.