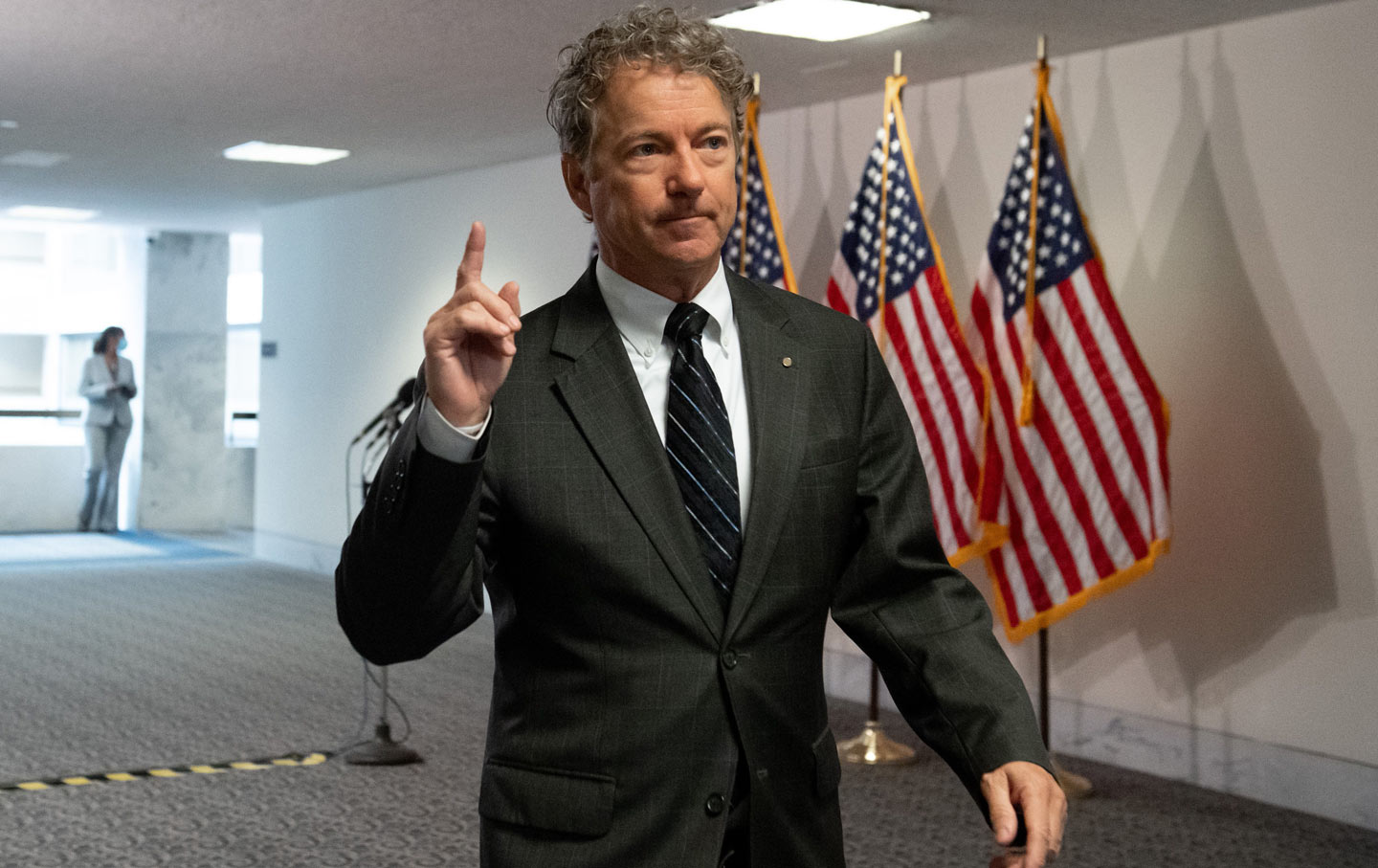 No serious republican in the American summer of 1787, or in the dark winter of 2021, would dare to narrow the impeachment power with time limits on when a current or former executive might be held to account for high crimes—especially so high a crime as the one in which President Trump engaged on January 6. To do so would disarm Congress in the struggle against kingly abuses of precisely the sort feared by the delegates who gathered 234 years ago to frame the Constitution of the United States.

Yet a time limit is precisely what Kentucky Senator Rand Paul sought to impose on Tuesday, as he dismissed the original intent of the Constitution in a desperate defense of his sovereign: Donald John Trump.

A majority of senators rejected Paul’s infamy. But he got 44 of his fellow Republican senators—including the most cynical of their number, minority leader Mitch McConnell (R-Ky.)—to join him in promoting the latest Big Lie of the Trump-owned Republican Party: that the impeachment trial scheduled to begin February 9 is unconstitutional.

Instead of joining responsible members of Congress from both parties in recognizing the seditious nature of the events of January 6, Paul’s immediate response to the attack on the Capitol and to revelations about its planning and execution was to do the bidding of his political potentate. The Kentuckian moved to block the process of holding to account a ruler who sought to retain his power by exhorting a mob to “fight like hell” to upend the vote-counting process that would end his presidency.

Make no mistake: If a former president, any former president, cannot be impeached, tried, and convicted for incitement of insurrection—with intent so destructive that House Republican Conference chair Liz Cheney has said there “had never been a greater betrayal by a President of the United States of his office and his oath to the Constitution”—then the constitutional shield against monarchical excess has been tossed aside. And history has been rewritten to favor the rule of a man over the rule of law.

When the Constitutional Convention of 1787 determined that tools would be required to thwart the kind of “injuries and usurpations” that had warranted rebellion against the British Crown, the delegates established a robust impeachment power as the ultimate deterrent to an imperial presidency. While this power might be used to check and balance individual wrongdoers, its true purpose was to assure that the office of the presidency would not become an imperial redoubt.

The capacity to guard against American monarchy was broadly defined so as to guarantee that executives of the new United States would never be permitted to abuse the temporary position of the presidency with the purpose of extending a tenure beyond what was permitted by the Constitution and by the people. The spirit of the age was summed up by George Mason when he made the determining argument for a strong impeachment power. “No point is of more importance than that the right of impeachment should be continued,” he declared. “Shall any man be above Justice? Above all shall that man be above it, who can commit the most extensive injustice?”

Mason’s view prevailed and the Congress was afforded the authority to address treason, sedition, insurrection, and the incitement of these high crimes. There was no mention of this authority’s expiring after a president left office. In fact, the delegates anticipated the threat posed by an errant executive who might manipulate the process—perhaps by resigning in order to avoid a conviction vote, perhaps by having allies in the Senate delay a trial until after an impeached president had left office. Article I, Section 3, Clause 7 of the Constitution provides that judgments in cases of impeachment could extend to “disqualification to hold and enjoy any office of honor, trust or profit under the United States.”

Paul now says that “impeachment is dead on arrival.” If he is right, then Trump is not the only Republican in Washington who has betrayed his office and his oath. Indeed, there but for five Republicans who rejected the Kentuckian’s resolution—Mitt Romney of Utah, Ben Sasse of Nebraska, Susan Collins of Maine, Lisa Murkowski of Alaska, and Pat Toomey of Pennsylvania—the Grand Old Party’s Senate caucus has signaled that it is prepared to serve as the instrument of anti-constitutional perfidy.

The threat to the republic that Paul has initiated involves more than a rejection of duty, however. The Constitution was born in a revolutionary moment that rejected the divine right of kings in favor of the rule of law. On Tuesday, Rand Paul and his 44 colleagues voted to overturn that basic premise of the American experiment.

Paul and the other senators who chose Trump over the Constitution are prepared to prevent the Senate from trying and convicting a seditious former president who, it is quite clear, is determined to return to the Oval Office. And who has suggested, again and again, that he would like to maintain a grip on that office for years, even decades, after the Constitution permits. Trump has repeatedly mocked the two-term limit that the Constitution imposes on presidents. Last fall, he told a campaign rally in Wisconsin, “We are going to win four more years. And then after that, we’ll go for another four years.” Earlier in the year, after his first impeachment trial, Trump tweeted a fake-news manipulation of a Time magazine cover featuring Trump campaign signs for 2024, 2028, 2032, 2036, 2040, before finishing with “Trump 4EVA.” 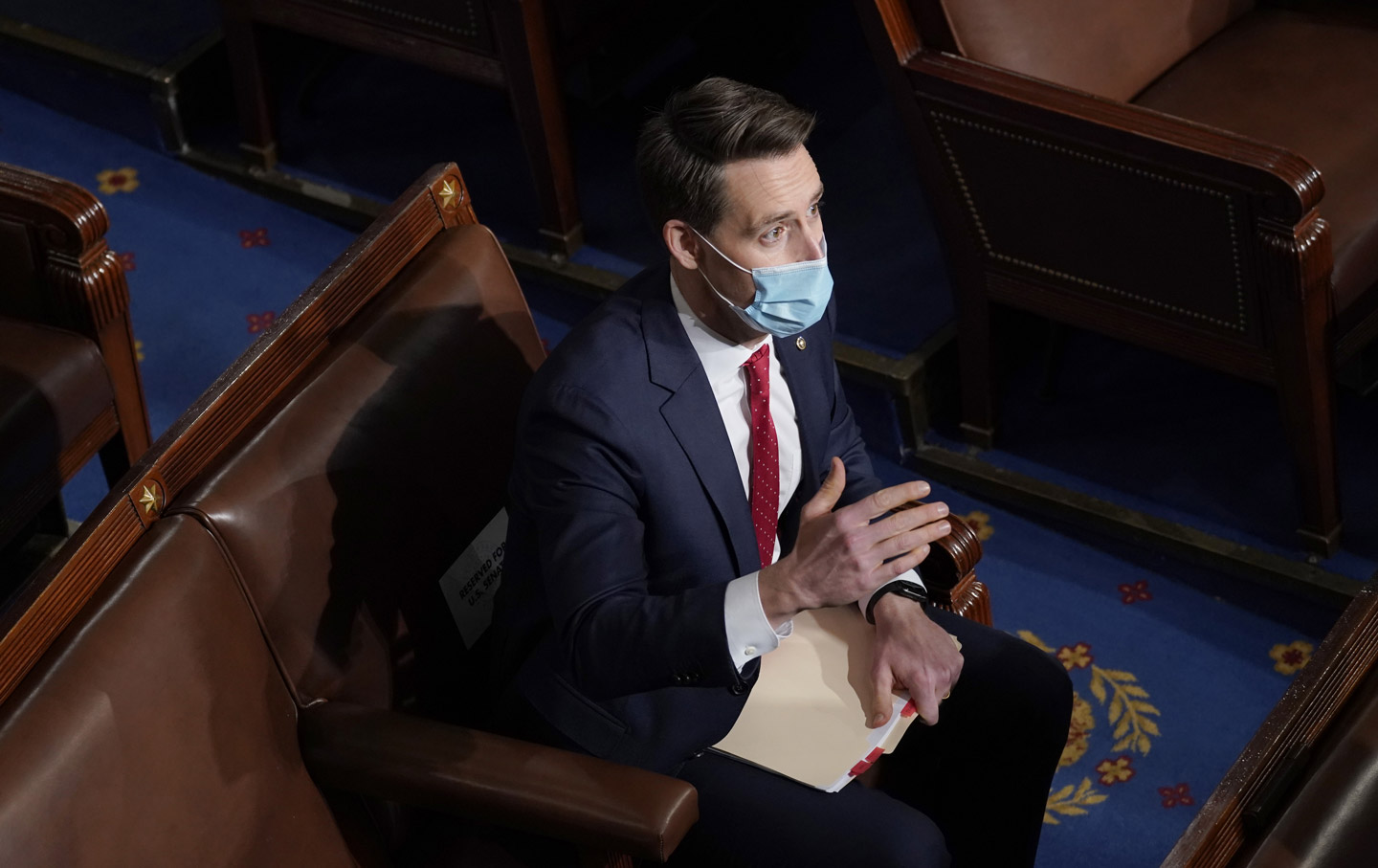 That was laughable at the time. But Trump’s kingly ambitions—even if they do not extend to eternity—looked a lot more real, and a lot more dangerous, on January 6. So, too, do the schemes of his senatorial henchmen.

We should recognize Rand Paul’s treachery for what it is: not the momentary project of a Republican loyalist but the work of a royalist stooge in everything but name, an American monarchist seeking to dispense with the essential protection afforded the American people and their elected representatives to guard against a fully imperial presidency.