Chicago mayoral candidate Lori Lightfoot speaking to the press outside of the polling place at the Saint Richard Catholic Church in Chicago, Ill., on April 2, 2019. (Kamil Krzaczynski / AFP via Getty Images)

Since her historic win in 2019, Chicago Mayor Lori Lightfoot has done very little for progressives across Chicago, who once believed she was the right champion to combat the insider wheeling and dealing of the self-serving institution infamously known as the fifth floor of City Hall. With former president Donald Trump no longer available as a sparring partner on Twitter, Mayor Lightfoot’s political dynamics have gone unchallenged by the media.

Now, Mayor Lightfoot has used her half-time political speech as an opportunity to attack what she called the “overwhelming whiteness” of the liberal media establishment. In a lengthy press release, Mayor Lightfoot assailed the City Hall press corps that covers her for lacking diversity in its editors and reporters. Consequently, Mayor Lightfoot will be “exclusively providing one-on-one interviews with journalists of color” heading into the 2023 mayoral election cycle. “As a person of color,” she said in her statement, “I have throughout my adult life done everything that I can to fight for diversity and inclusion in every institution that I have been a part of and being mayor makes me uniquely situated to shine a spotlight on this most important issue.”

If this is a matter she takes personally, so do I. As an award-winning journalist of color who has also run for office in Chicago, I’ve witnessed the lack of diversity in the political media from both sides. The mayor’s new policy appears on the surface to contribute to much-needed inclusiveness. But in the context of Chicago politics, this policy is strategy, not sincerity. The well-known diversity issue would have been better addressed in the first 100 days of her administration, rather than at the cusp of the next election season.

For Mayor Lightfoot, the access policy functions as a form of political immunity, to distance her from her reputation as a dysfunctional political reformer. Resilient leaders of color in this city often become celebrities, making their actions less attractive to scrutinity on the part of the press. With the establishment media perpetually fawning over personalities who fall short as policy-makers, putting limits on the number of observers of her political maneuvering would only exacerbate this trend. Creating fissures in the press corps of City Hall serves two vital purposes for Lightfoot: setting the tone for her eventual reelection campaign and dodging critical assessment of her poor leadership.

Nonetheless, the bold demand for robust civilian police oversight of the Chicago Police Department that many progressive voters demanded from candidate Lightfoot failed to materialize during the first two years of her term. This issue became all the more troubling when Lightfoot fell short of providing meaningful leadership in the aftermath of the police shootings of 13-year-old Adam Toledo and 22-year-old Anthony Alvarez. Mayor Lightfoot’s response to these shootings was to call for a long-overdue foot pursuit policy for Chicago officers, which, the CPD announced Wednesday, will temporarily go into effect next month.

At this juncture in Lightfoot’s administration, the reforms she touted to invigorate a fragmented Chicago political landscape have not gained the confidence of the public at a level sufficient to secure a second term. Without the reckless thumbs of Donald Trump for the next 24 months to make her appear a credible leader, Lightfoot’s inability to resolve the challenges of Chicago means she needs a new adversary, in the absence of the transformation she promised. That adversary has become the “white media.” Granting selective and privileged access to a restricted set of journalists, if it were not given the pretext of diversity, would be tantamount in any other context to assembling a personal propaganda press corps—in this case, for an uninspiring reelection campaign.

As a candidate, Lightfoot benefited from an identity politics slant from the same white media she now decries. In the lead-up to the election, the politically unknown former federal prosecutor was depicted as anything but the establishment candidate, and voters supported her with a landslide win. Next time, it won’t be such an easy sell. Last week, several hundred protesters presented her administration with an “F” grade on the doorstep of her home. 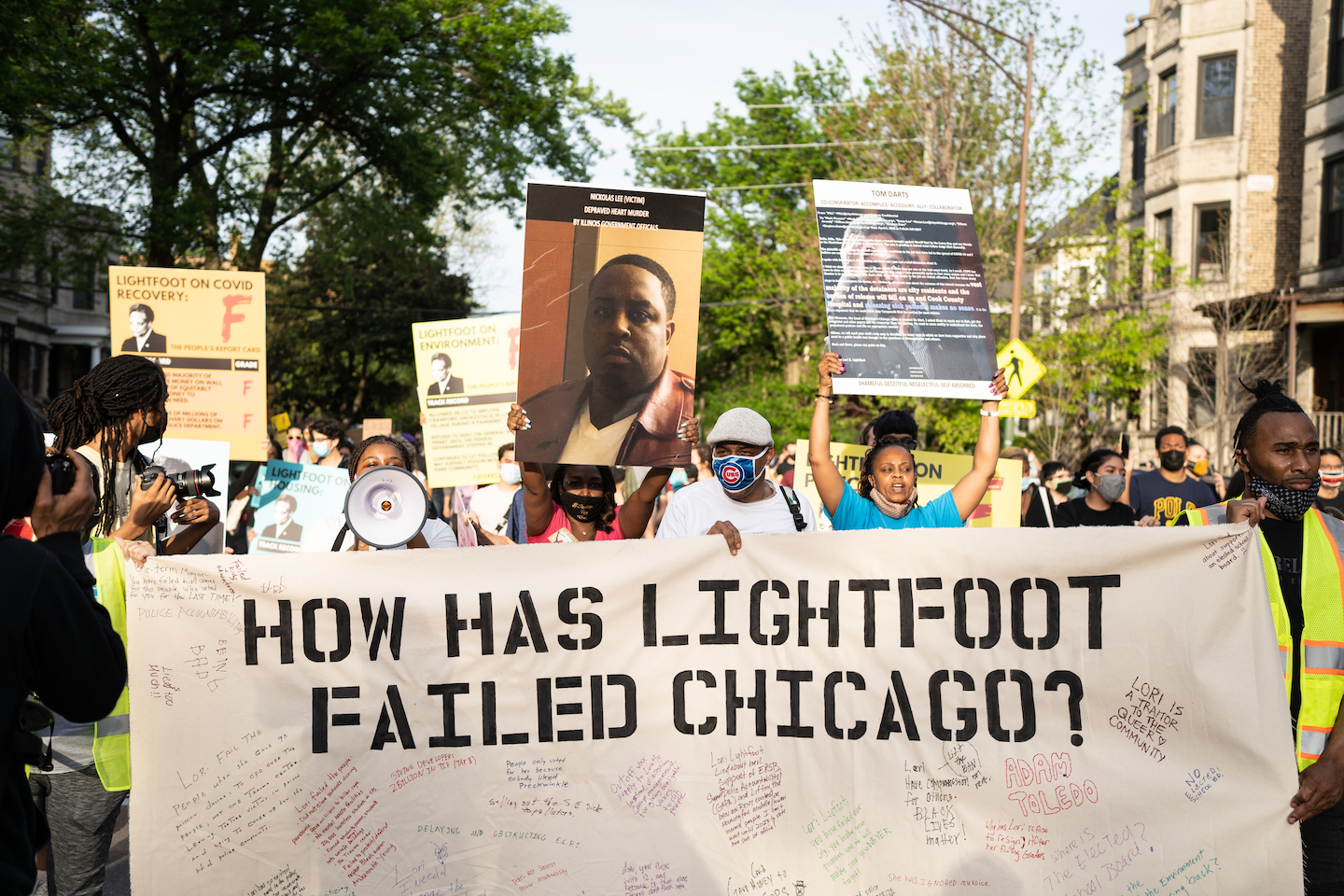 Demonstrators protest Chicago Mayor Lori Lightfoot on the second anniversary of the mayor’s time in office near her home in the Logan Square neighborhood in Chicago, Illinois on May 20, 2021. (Photo by Max Herman/NurPhoto)

On Monday, Lightfoot finally introduced a civilian police oversight policy. Chicago progressives note that its framework is distinctly different from the one she presented as a candidate seeking the seat on the fifth floor. This policy has to be voted on by a city council of aldermen who might outright reject it, as an affront to the hemorrhaging influence of Mayor Lightfoot on governing the city.

Lightfoot has earned scrutiny, from the press and from the public. There are tough questions she needs to be confronted with, especially if she intends to seek reelection. These questions risk being compromised by the very people who should be asking them. The Chicago City Hall press corps, exclusive or excluded, needs to be unbiased, disciplined, and ethically unimpeachable in order to function against a mayor cornered and grasping for a path to victory. Providing exclusive access to journalists of color makes them accomplices, not unbiased professionals who report facts.

Lightfoot is now attempting to manipulate the attrition of a deflated and desperate voter base that will likely demand more in 2023 from their latest history-making politician. She needs to be greater than a living monument of undelivered expectations if she believes she deserves another term.

While claiming her reform mandate as a means of rising above the political establishment in Chicago, the mayor has led the city into more fragmentation. With a post-Covid city ready to explode this summer from rampant shootings and carjackings, Lightfoot is using race as a distraction from her political record, to divide and conquer journalists as the city is dripping in blood from lethal gun violence. The weekend after her announcement was the deadliest of the year, in which at least 12 people were murdered and another 48 shot. According to police department records, all of these victims were people of color—typical of violent crime in Chicago, a city where the mayor checks every box in diversity.