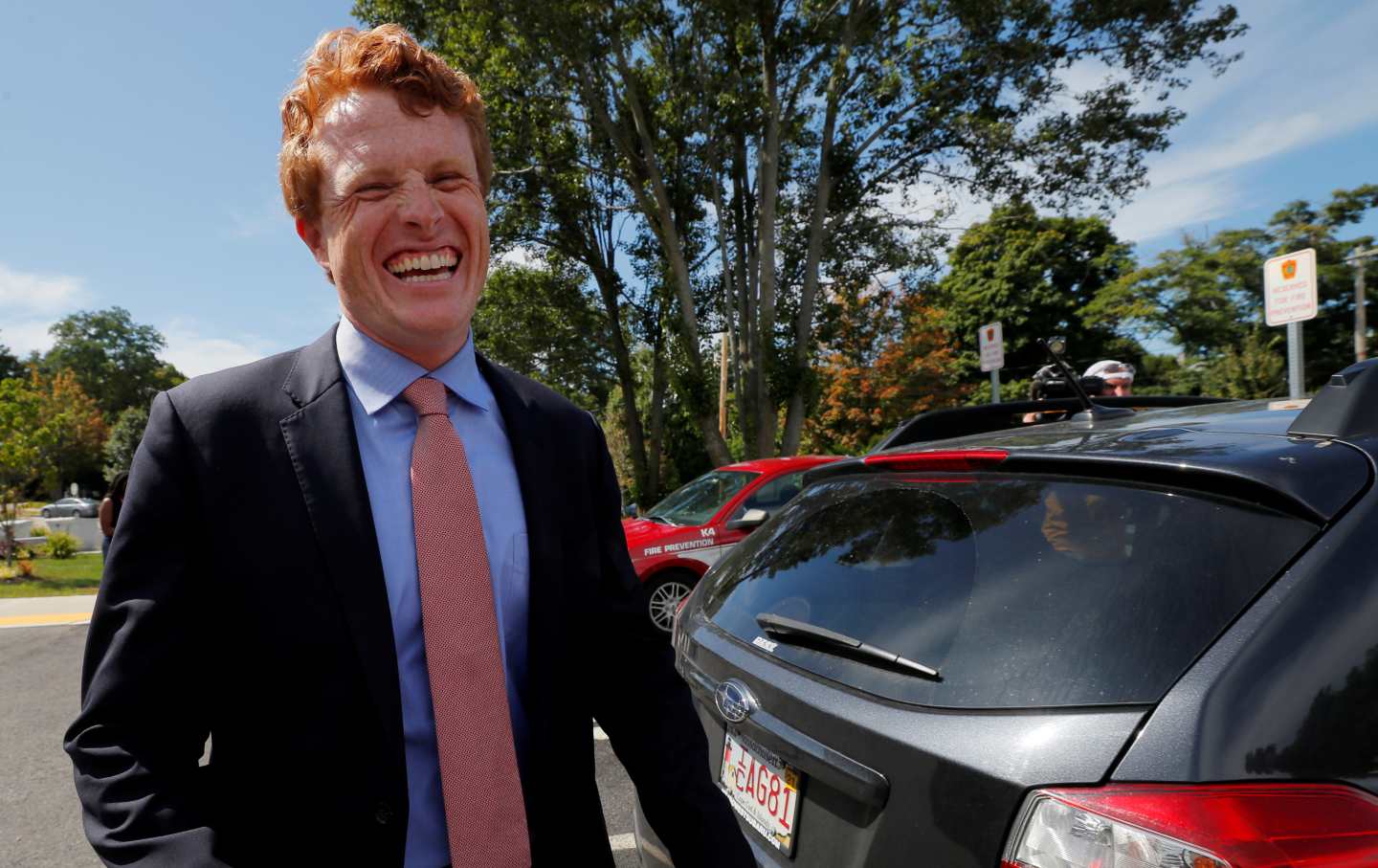 At the Harvard Kennedy School’s John F. Kennedy Jr. Forum, Representative Joe Kennedy III (D-MA) made the case for his Senate campaign. “I’ll put my environmental record in Congress up against anybody’s,” said Kennedy, who is leading a primary challenge against the Green New Deal’s co-author Ed Markey (D-MA). At the event, an audience member asked Kennedy about his fossil-fuel industry stock holdings—estimated by Sludge at about $1.75 million—prompting the candidate to maintain: “Those assets are family assets that have been held for an awfully long time, well before I was born—I exercise no control over them whatsoever.”

But Kennedy’s assertion at the October 2019 event hinges on a technicality, distracting from the details of his 2018 financial disclosure. His form lists two January 2018 sales of $50,000–$100,000 each in ExxonMobil assets made by a trustee—and while Kennedy didn’t make the sale directly, it wasn’t in a blind trust, so he at least had knowledge of it. It’s a revealing omission: Kennedy seeks to distance himself from his massive family fortunes—both financial and political—and instead present himself as something more fashionable in 2020: a young progressive primary challenger.

Kennedy would have voters pay little mind to those fossil fuel stocks and the rest of his $19.2 million in trust assets—invested in private corporations across industries, from Verizon and Vanguard to Coca Cola and CVS Caremark—which made him, according to Roll Call’s 2018 rankings, the 27th-wealthiest out of 535 members in the 115th Congress. On the campaign trail, Kennedy isn’t dwelling on the family name or business—he’s posing the kinds of questions you’d expect from Democratic upstarts like Representatives Ayanna Pressley (D-MA) or Alexandria Ocasio-Cortez (D-NY).

“How much worse does it have to get before somebody doesn’t have to ask permission to launch a race for office?” Kennedy asked during a January appearance on the Worcester, Massachusetts, radio show Talk of the Commonwealth. He cited decades of “failed leadership on climate,” the abusive and chaotic US foreign policy machine, and the proverbial “kids in cages.” He continued, in an earnest tone: “All I’m sayin’ is, it’s time for a different approach, a different way of doing things, a different viewpoint…to say, ‘Hey, here’s an alternative pathway. You make a choice.’”

This, from Kennedy, was a typical explanation for the necessity of his campaign. Like many of his Democratic compatriots, he likes to focus on the most flagrant violations by the Trump administration, from the assassination of Iranian Maj. Gen. Qassim Suleimani to the various arguments for impeachment. When host Hank Stolz pressed Kennedy on what his Trump objections have to do with the incumbent he seeks to replace, Kennedy didn’t go after Markey’s regrettable 2002 vote in favor of the Iraq War or his “present” vote on intervention in Syria, perhaps because local peace groups prefer even Markey’s mottled record to Kennedy’s. Instead, he rattled off a few process critiques—areas where, to his credit, he seems to have pushed Markey: eliminating the electoral college, the filibuster, and “money in politics”—before turning to the “biggest difference” between himself and his opponent: “When there is so much at stake for our country, so much at stake for the Democratic Party, so much that is up for definition for domestic policy, foreign policy, about building a bench for the Democratic Party, helping define what it means to be a Democrat, that’s something a Democratic senator needs to play a role in.” 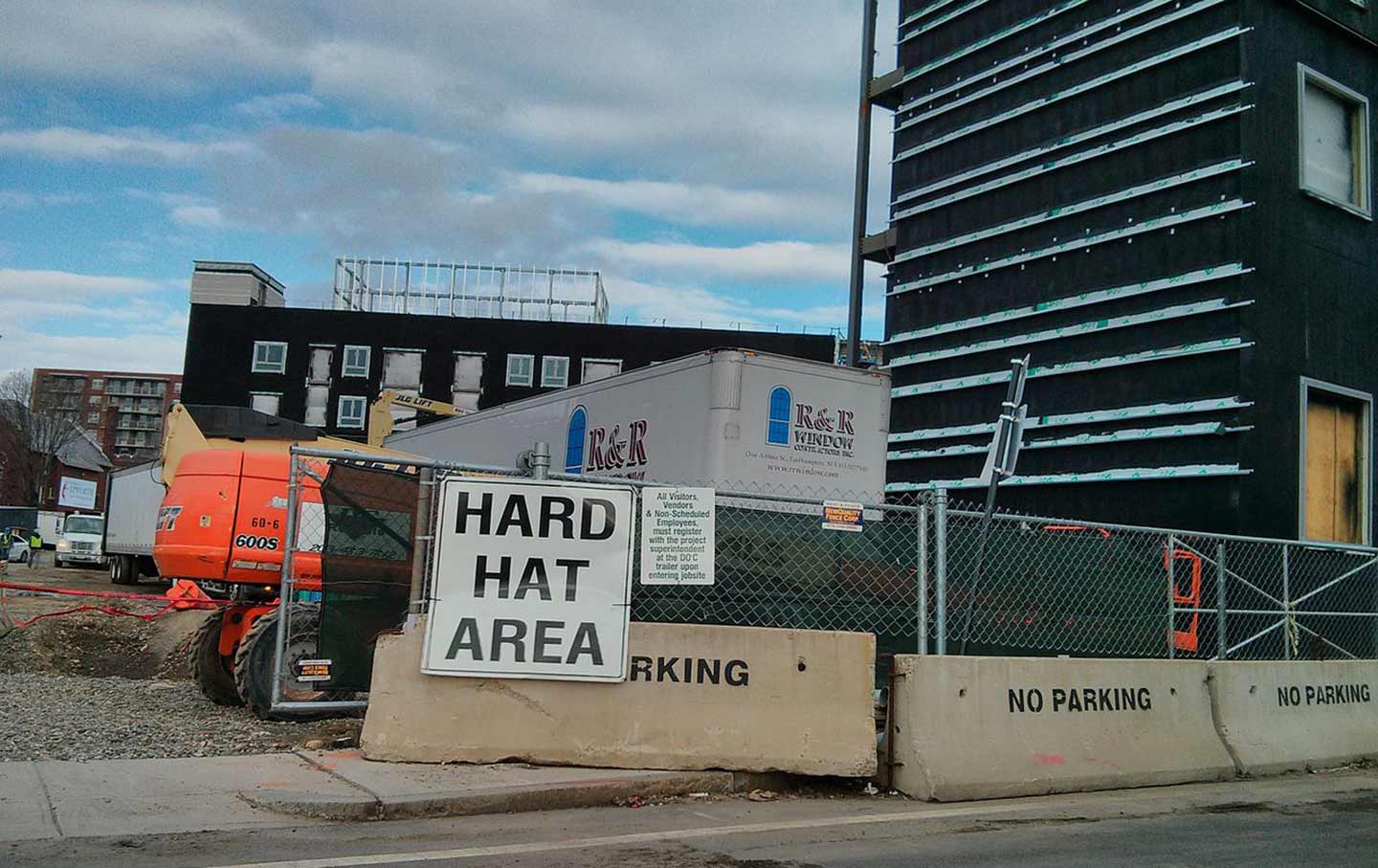 What Happens When Gentrification Comes to a Postindustrial City?

Though there isn’t exactly an ideological chasm between Markey and Kennedy, the latter’s vague promises of bold leadership don’t sit well with many grassroots organizers in the state. “It’s very difficult to take [Kennedy] seriously on being a progressive champion of any sort, because he’s a sitting elected official,” said Mohammed Missouri, executive director of Jetpac, a Massachusetts-based political action center that supports American Muslims in government. “Is he a leader in the Progressive Caucus, and has he ever been a leader in the Progressive Caucus? [He has not.]… I look at these things he says about how he would be a senator, and I say: ‘So why aren’t you doing those things as a member of the House?’”

Missouri’s organization has not weighed in on the primary, but he is far from alone in his skepticism. When Kennedy tweeted: “Climate change isn’t an issue of tomorrow, it’s happening now. Proud to support the Green New Deal…. There are few greater priorities in Congress than translating those goals into action. Now,” the Sunrise Movement scorned him: “We’re glad you co-sponsored the #GreenNewDeal (after significant pressure from us)! But why are you running to unseat @EdMarkey, [its] lead Senate champion? When you say ‘there are few greater priorities’ than the Green New Deal, is the exception your own political ambition?”

Despite misgivings from many progressives, Kennedy’s poll numbers surged ahead of Markey’s as soon as he entered the race last September, and he out-raised Markey in the last two quarters of 2019. He’s been fawned over by centrists recalling a more moderate, less adversarial Democratic Party. In a laudatory profile titled “The Last Kennedy,” Atlantic writer Edward-Isaac Dovere explained Kennedy ’s “moral capitalism”: “He believes that if capitalism isn’t radically rethought, democracy will collapse. But Kennedy isn’t a socialist, and he doesn’t want socialism to be where his party is headed.” While Markey isn’t a socialist either, this ideological emphasis matters more for a challenger who says his “biggest difference” with the incumbent is his will to direct the party.

“The gripe about Kennedy,” Dovere’s profile warned in April 2019, “voiced quietly by friends and political professionals alike is that he’s too cautious and has spent so much time stressing about the right way to deploy himself that he’s missed actually deploying himself. They fear he’ll miss his moment.” A version of this concern drives both the Kennedy campaign’s logic and some of its most forceful critiques.

“I think [Kennedy] realizes that with more people organizing here—and Massachusetts turning more progressive in the next few years—he would probably not have a shot if he waited,” Missouri said. According to Jonathan Cohn, a chair with the grassroots organizing group Progressive Massachusetts (which is waiting to survey its members before endorsing a candidate), “In his launch video a few months ago, [Kennedy] talked about that rhetoric of urgency, seemed to be evoking an Ayanna Pressley ‘change can’t wait’ mantra, although that hasn’t really been his legislative style.”

As a member of Congress, Kennedy has been more cautious than his opponent: In the current session, Markey has sponsored 80 bills and 22 amendments; Kennedy has sponsored 11 and three respectively. The ratio holds among past years: For the four terms they’ve spent simultaneously in Congress, Markey has sponsored between four and 15 times as many bills as his challenger. And while there are more members in the House, there’s now a Democratic majority, theoretically making bills easier to pass when they do get introduced.

Of course, merely bringing bills forward does not make a good legislator. But several of Markey’s trademark issues matter to progressives, and they tend to show up in his legislation: A longtime advocate of net neutrality, Markey is the lead sponsor on the Save the Internet Act; the Restricting First Use of Nuclear Weapons Act; the LABEL Opioids Act; and a host of environmental initiatives, including the Stop Giving Big Oil Free Money Act, the BAN Oil Exports Act, and the Offshore Wind Jobs and Opportunity Act. Kennedy’s legislation is what you might call pragmatic: He’s signed on as a cosponsor of the House versions of some of Markey’s proposed legislation. Kennedy has also introduced the Medicaid Bump Act, which seeks to raise the Medicaid fund matching rate for mental and behavioral services, and the Worker Dividend Act, which creates the expectation that companies with over $250 million in yearly earnings will pay their employees a dividend—or a tax, should they decline.

This approach—assuming markets and businesses are basically good, but need a regulatory-yet-not-adversarial government hand—echoes the calls for “big, structural change” made by Kennedy’s former Harvard Law professor and current Massachusetts Senator Elizabeth Warren. He’s endorsed her for president. Given the timing of his campaign though, he doesn’t seem confident that she’ll win (and thus vacate a Senate seat), and the lack of faith is reciprocal: She supports Markey.

Kennedy isn’t a secret conservative, but he has been cautious in his backing of progressive policies. When Boston DSA canvassed his constituents and called Kennedy’s office to support Medicare for All, the response was polite, but hesitant. “We expected change after a few hundred calls,” said one member, “this lasted months.” (Kennedy signed on in February 2019; Markey was an original cosponsor in September 2017.)

“I have yet to witness Joe Kennedy stick his neck out for issues that are not already of the political mainstream,” said Charlotte Kelly, executive director of the Massachusetts Education Justice Alliance (which also has not endorsed), referencing the time it took for Kennedy to endorse Medicare for All and the Green New Deal. “Co-opting movement politics when you’re not actually a movement candidate is disingenuous.”

In Kelly’s experience, it’s Markey, not Kennedy, who has shown a commitment to organizing. She and two fellow activists pointed out that when lawmakers from Massachusetts—including Warren and Kennedy—rallied around the high-profile deportation case of an MIT worker, Markey showed up before the case garnered major attention and stuck around to check in with grassroots groups after. Last winter, when the furnace died at the organizing hub where Kelly works, Markey’s campaign chipped in for a new one. “Without a furnace,” Kelly said, “there were going to be so many organizations that weren’t going to be able to have their regular meetings, or prep for their protests, or be able to go out and hit the streets and build our movements.”

“If [Kennedy] really wanted to rehab his image as a progressive,” Missouri suggested, “he could do that by working with organizations that are doing incredible work. With his money, with his political connections, he could easily start a PAC.… Instead it’s, ‘Why don’t you help me go from the US House to the US Senate?’”

According to Cohn, “the political goodwill of Kennedy’s last name in many ways neutralizes the incumbent advantage.” It’s likely, too, that it helped drum up a slate of endorsements: Last week, 18 House Democrats announced their support for Kennedy. But endorsements, Cohn said, “only have power if they’re actually put to work.” And as John Walsh, Markey’s campaign manager, pointed out, Markey has more support among lawmakers at the state level, as well as among environmental advocacy groups. Emily Kaufman, communications director for the Kennedy campaign, said, “Joe is proud of his record and grateful for the support of progressive leaders throughout Massachusetts.”

While Kennedy is posing as a more progressive challenger, he is also relying on the nostalgia of his base. “As big and as bold as any of the solutions are out there now,” he said at a recent town hall event in Peabody, Massachusetts, “I am reminded of a young president who looked up in the sky one night and said: You know what? Let’s go there in 10 years. And we did it.”

With massive name recognition, prominent national backing, and plenty of cash on hand, Joe Kennedy III’s winning a Senate seat isn’t guaranteed, but it’s not a moonshot either. “It’s not an insurgency campaign,” said Missouri. “It’s more like an establishment takeover.”