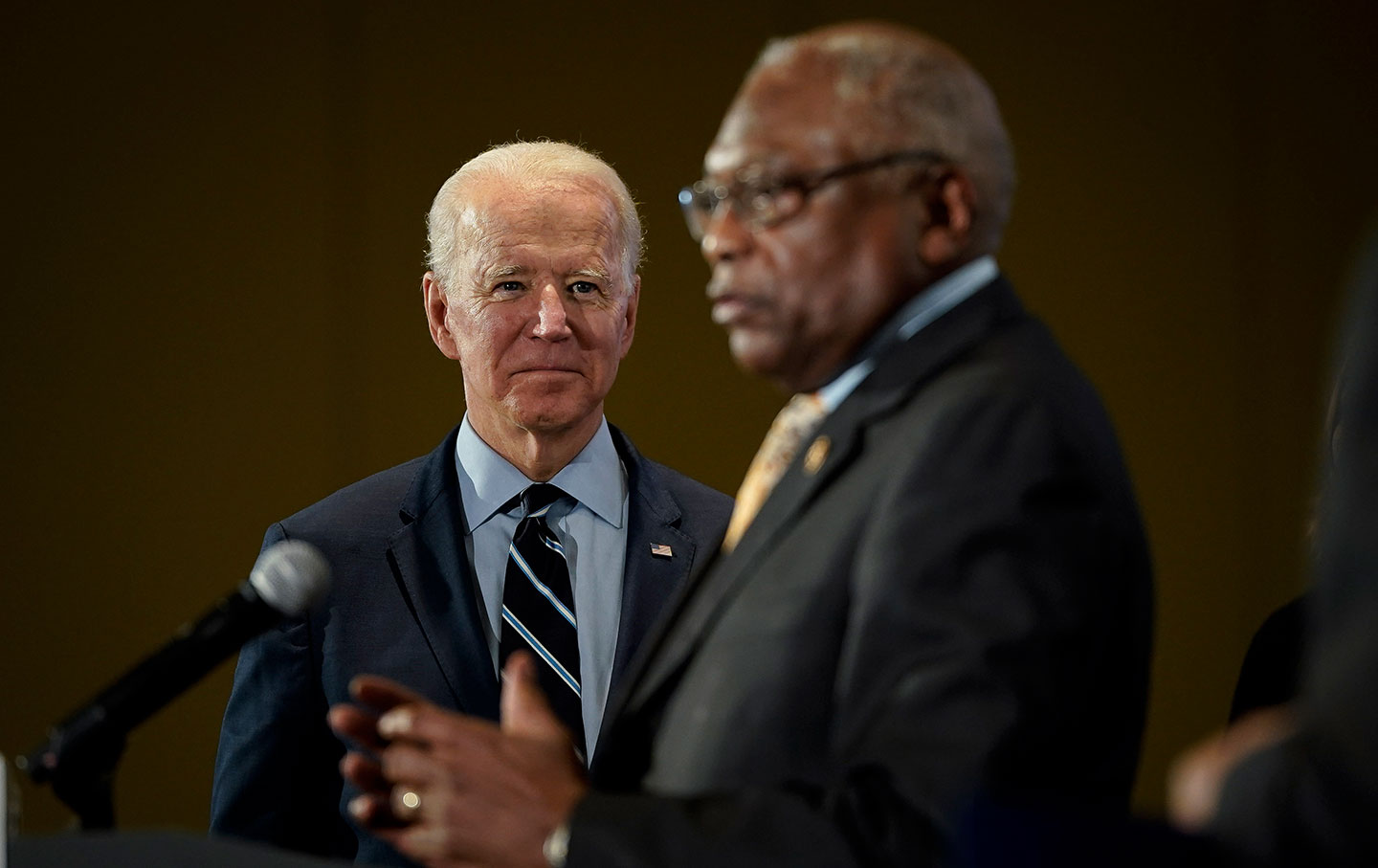 Charleston, South Carolina—If not for California hedge-fund billionaire and major climate change donor Tom Steyer’s massive cash investment in South Carolina, former vice president Joe Biden would be looking at a runaway win here, which could be a crucial harbinger of the Southern black vote in the Democratic primaries to come. Even before elder Palmetto statesman Representative Jim Clyburn came off the sidelines to endorse him Wednesday, Biden was racking up growing leads in recent state polls. On Thursday, the Monmouth poll found him 20 points ahead of Senator Bernie Sanders, leading 36-16, with Steyer right behind at 15, and other candidates stuck in single digits.

“Steyer is a proxy for [Michael] Bloomberg,” says Jamie Lovegrove of The Post and Courier, one of the best local reporters on this beat. That’s exactly how it feels. But Bloomberg, who is not on the ballot here, has the money to stay in the race throughout the primaries, and Steyer, a less-endowed billionaire, does not.

Having lived through the shambles that was the Iowa caucus, I’m starting to worry that South Carolina will be equally meaningless. It feels so good, after three contests, to be covering a Democratic primary that features a majority of black and brown voters, and in an election, not an exclusionary caucus. It feels real. That said, the outsize influence of Steyer’s spending makes it surreal.

To be fair, Steyer has gained support because other candidates haven’t fought hard enough for it, at least until recently. As Jesse Jackson’s 1988 state campaign manager, Kevin Alexander Gray, wrote here on Thursday, Steyer has “hired black vendors, bought ads in our all-but-dead black newspapers, deposited $1 million in a black-owned bank, bought into black radio early on, and hired a multitude of black campaign consultants.” He’s got a staff of at least 100 people and he’s spent more than $20 million here. 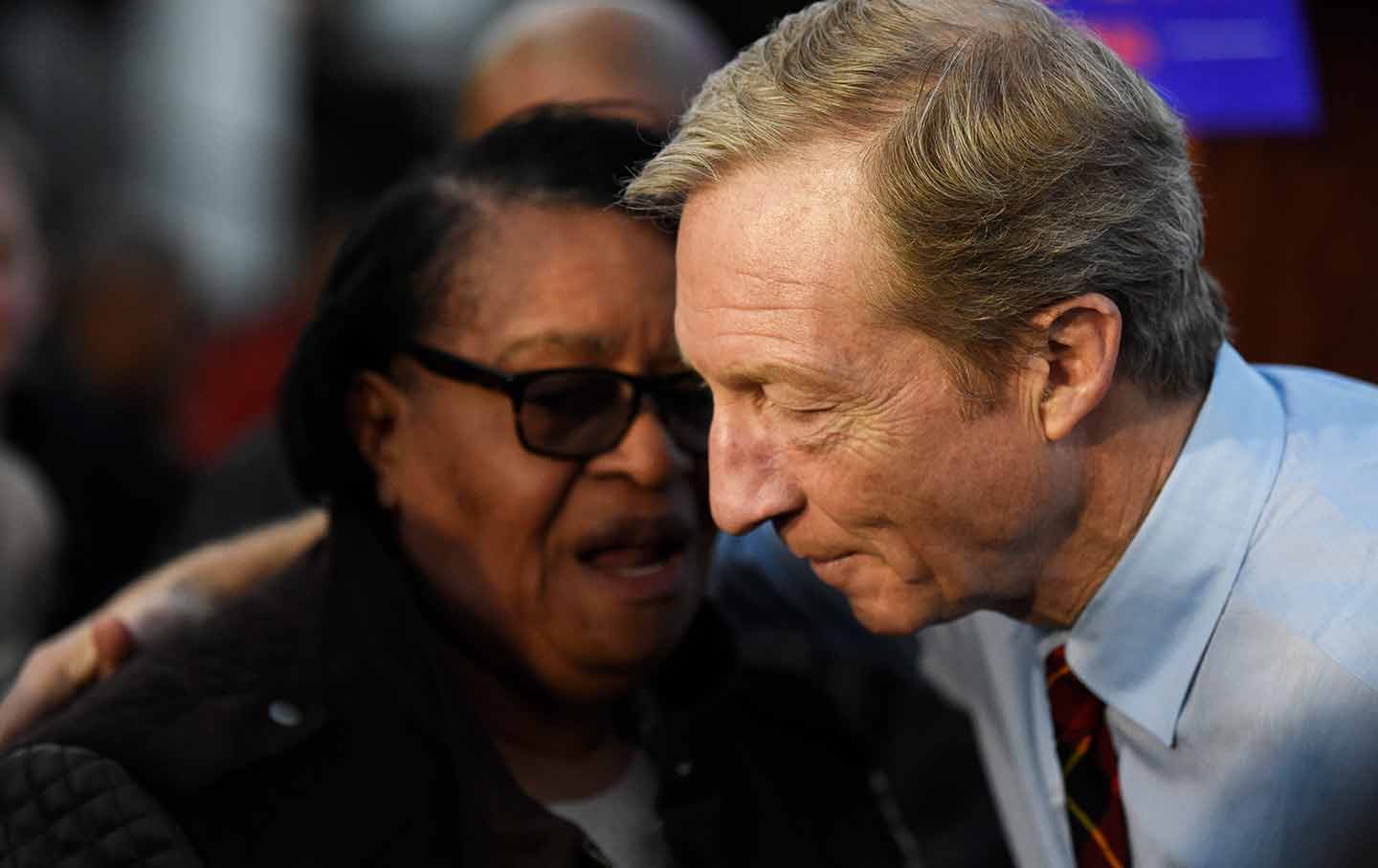 Steyer also shocked South Carolina political elites by signing on Representative Gilda Cobb-Hunter as a senior adviser earlier this month. Cobb-Hunter, who’s remained rigidly neutral in South Carolina’s primaries until this year, said she moved because Biden was calling South Carolina his “firewall” while taking it for granted. “Where Steyer has stepped up and Biden has not is simply coming into the state and asking people for their support and going throughout the state, meeting with people and hearing their concerns and responding to the questions that have been posed. The first part of any political victory has to be you’ve gotta show up,” she told Politico.

But in the last few weeks, Biden has been showing up. He redeployed resources from other states, increased ad spending, and has mostly parked himself here, while other candidates are dashing into some of the 14 Super Tuesday states, which will award 1,357 delegates on March 3. Clyburn’s backing was followed by an endorsement from Charleston Mayor John Tecklenberg. Others will follow.

The truth is, though, that the eight to 15 points the polls say Steyer is earning for his money are probably coming from everyone, not just Biden. I watched Bernie Sanders crash and burn here in 2016, losing to Hillary Clinton 74-26—and losing the black vote by an astonishing 86-14 margin. Nothing like that will happen Saturday. Sanders has invested on the ground here: His staff is reportedly 80 percent people of color. The Rev. Eric Manning of the Emanuel AME Church, where nine parishioners were murdered by a white supremacist in 2015, told CNN at a town hall event Wednesday night that he’s staying neutral in the race, but his son works for Sanders. But Steyer is blocking Sanders’s rise too.

He’s also taking support from Senator Elizabeth Warren, although she seems not to notice. She packed the Charleston Music Hall with more than 1,000 people Wednesday night, while 300 stood outside in the rain. (The fact that John Legend was set to play probably put some bottoms in the seats.) Though she’s lagged in the first three states, Warren has never seemed so loose. It’s typical for candidates to meet with major donors (as well as a few exemplary volunteers) in a “clutch” before a campaign event, but Warren, with Legend, met with a long line of parents and children instead.

“I’m the woman who’s gonna beat Donald Trump and help take down Lindsey Graham,” she told the crowd, which got extra excited at the idea of defeating their pathetic, Trump-toady senator. Afterward, she had to run to a CNN town hall, forsaking her trademark selfie line, so Legend sang for the crowd. Around the same time, Donald Trump was flagrantly lying about the coronavirus threat at a press conference. Bob Marley’s “Redemption Song,” passionately rendered by Legend alone at a piano, never sounded so moving or necessary.

Steyer will probably keep Biden from full political redemption here, limiting his ability to win the kind of mandate that could restore his “front-runner” narrative. But he might hurt Warren the most. The Massachusetts senator has impressive support from black women leaders, from her busiest surrogate, Representative Ayanna Pressley, to cofounder of Black Lives Matter Alicia Garza. I’ve been writing about Warren’s being erased in the media; in my opinion, nothing in this campaign has been erased like Garza’s endorsement of Warren.

Three days after South Carolina votes, we head into Super Tuesday, when Bloomberg makes his electoral debut. I’m not sure Steyer will even be a factor: he’s polling at 5 percent in his home state of California. Whatever happens here on Saturday, the March 3 deluge will likely make it irrelevant. Which is sad. The “First in the South” primary made winners of Bill Clinton, Barack Obama, and Hillary Clinton (who, let us never forget, won the popular vote that November).

This year two billionaires are making it hard to know what matters. Joe Biden could be making good on his front-runner promise. Bernie Sanders might redeem himself here after his 2016 loss. Elizabeth Warren’s work in black activist communities could conceivably pay off. I don’t think any of those story lines, except maybe Biden’s, will emerge Saturday night, but I would be thrilled to be wrong.