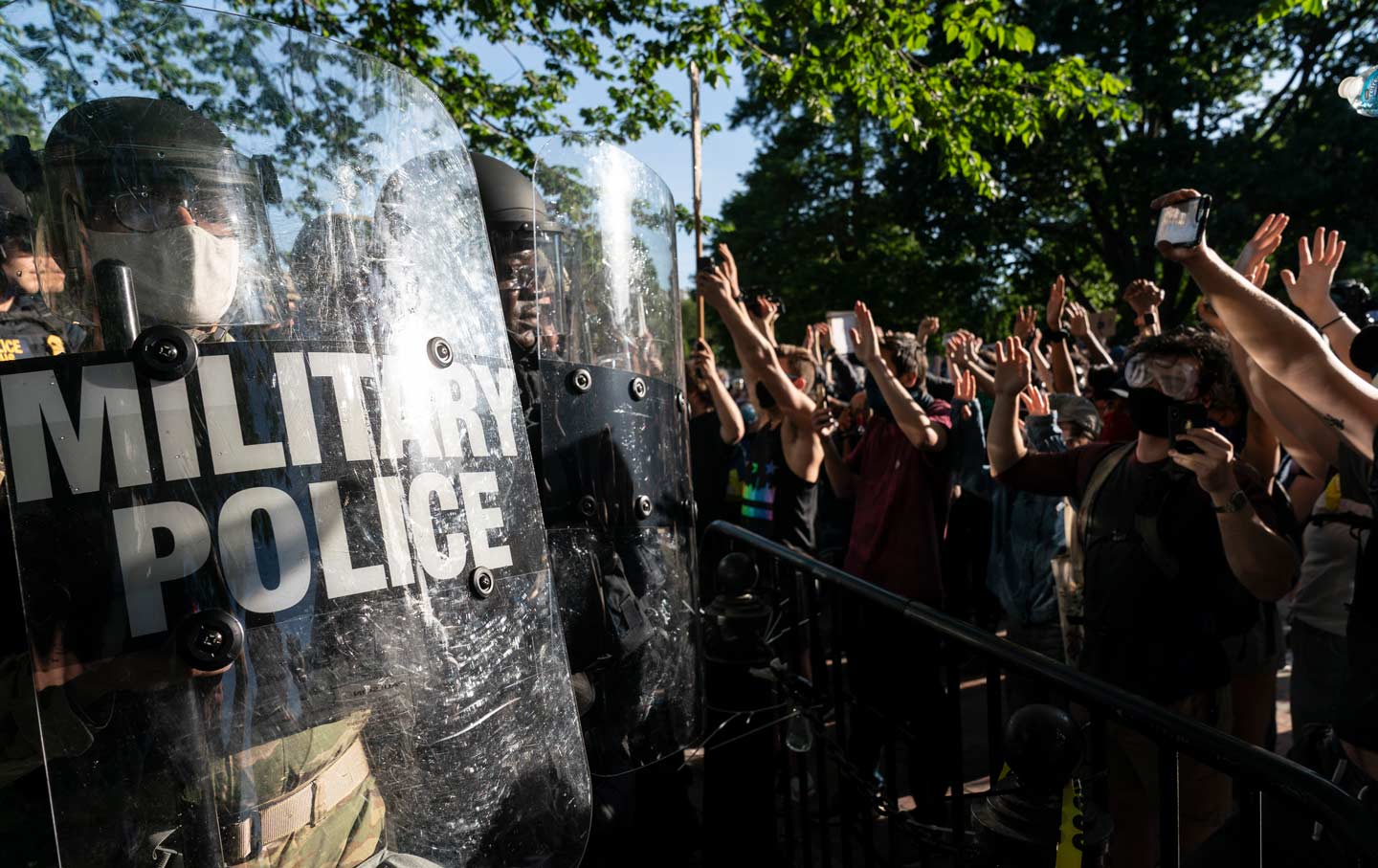 Protesters raise their hands to military police during a demonstration on June 1, 2020 in Washington, D.C. (Joshua Roberts / Getty Images)

When President Trump signaled Monday that he was prepared to send military forces to US cities in order to end unrest that has swelled since the death in Minneapolis police custody of George Floyd—and then had his attorney general order federal police to remove peaceful protesters from a park adjacent to the White House—Representative John Yarmouth warned, “The President just declared war on millions of Americans and the 1st Amendment. He is the greatest threat to the American way of life in our history.”

The Kentucky Democrat’s statement pointed to an unsettling irony.

The Constitution vests the power to declare war against foreign countries in Congress. But the law that Trump threatened to invoke in order to dispatch troops to communities across the country, the Insurrection Act of 1807, gives presidents at least some leeway to dispatch troops inside the United States without ever consulting Congress. “So what about now? Can Trump send federal troops to a state that doesn’t ask for them or even opposes them?” asked NBC News Justice Department and Supreme Court correspondent Pete Williams in an assessment of the Insurrection Act. “The current law doesn’t explicitly allow it. But it doesn’t clearly forbid it, either, and history is full of examples of presidents’ broadly interpreting this law or its forerunners.”

That’s something that members of the Congressional Progressive Caucus want to address. Immediately.

“In the coming days, we will be introducing legislation to prohibit the unilateral deployment of US military personnel into American cities without the explicit approval of Congress,” CPC cochairs Pramila Jayapal and Mark Pocan said Thursday, in conjunction with Representative Ilhan Omar. “Time and again, President Trump has governed as an authoritarian—abusing his power at the expense of the American people and our democracy. Now, he’s threatening to weaponize the US military against its own citizens.”

The message from the CPC leaders came amid a national outcry over Trump’s authoritarian excesses, which included a declaration Wednesday from Trump’s former secretary of defense James Mattis that “we do not need to militarize our response to protests.”

Noting the language that Defense Secretary Mark Esper has used and that Trump employed on Monday, Mattis wrote,

We must reject any thinking of our cities as a “battlespace” that our uniformed military is called upon to ‘dominate.’ At home, we should use our military only when requested to do so, on very rare occasions, by state governors. Militarizing our response, as we witnessed in Washington, D.C., sets up a conflict—a false conflict—between the military and civilian society. It erodes the moral ground that ensures a trusted bond between men and women in uniform and the society they are sworn to protect, and of which they themselves are a part. Keeping public order rests with civilian state and local leaders who best understand their communities and are answerable to them.

Mattis, a retired Marine general, was one of several prominent military figures who raised concerns about Trump’s ranting about military crackdowns on demonstrations against police brutality and structural racism. “Even President Trump’s own Secretary of Defense, Mark Esper, opposes deploying troops to silence the protests,” noted Representatives Omar, Jayapal, and Pocan. “The American public has a constitutionally protected right to free speech. Deploying the military in an attempt to quash these protests would be an attack on our constitution, our democracy, and our people. Congress must send an unequivocal message that this grotesque abuse of power will be stopped.”

Trump and the Military

Pocan, in an interview with The Nation, said the president’s recent actions have created a sense of urgency on the part of members of Congress. Noting reports that chemical irritants such as pepper balls were used to disperse protesters, the representative said, “He used chemical weapons against peaceful protesters for a photo op, so it doesn’t give us confidence that we should trust the president to make unilateral decisions about using military force domestically.”

Might Republican members of Congress, who usually bend to the will of the president, be inclined finally to stand up? That’s going to be necessary to override an all-but-certain veto. Some Republicans have been outspoken in their criticisms of Trump’s recent actions. For instance, South Carolina Senator Tim Scott said, “If your question is: Should you use tear gas to clear a path so the president can go have a photo-op? The answer is no.” But whether these objections could translate to a sufficient level of support to sustain the legislation remains a tall order, especially with a Senate that has been disinclined even to assert basic premises of the Constitution when it comes to checking and balancing the president’s war powers.

Yet, Pocan says, “this is not complicated. If we accept that the Constitution says the president has to go to Congress in order to go to war internationally, then he certainly should have to go to Congress and get permission before he deploys troops in the U.S.”