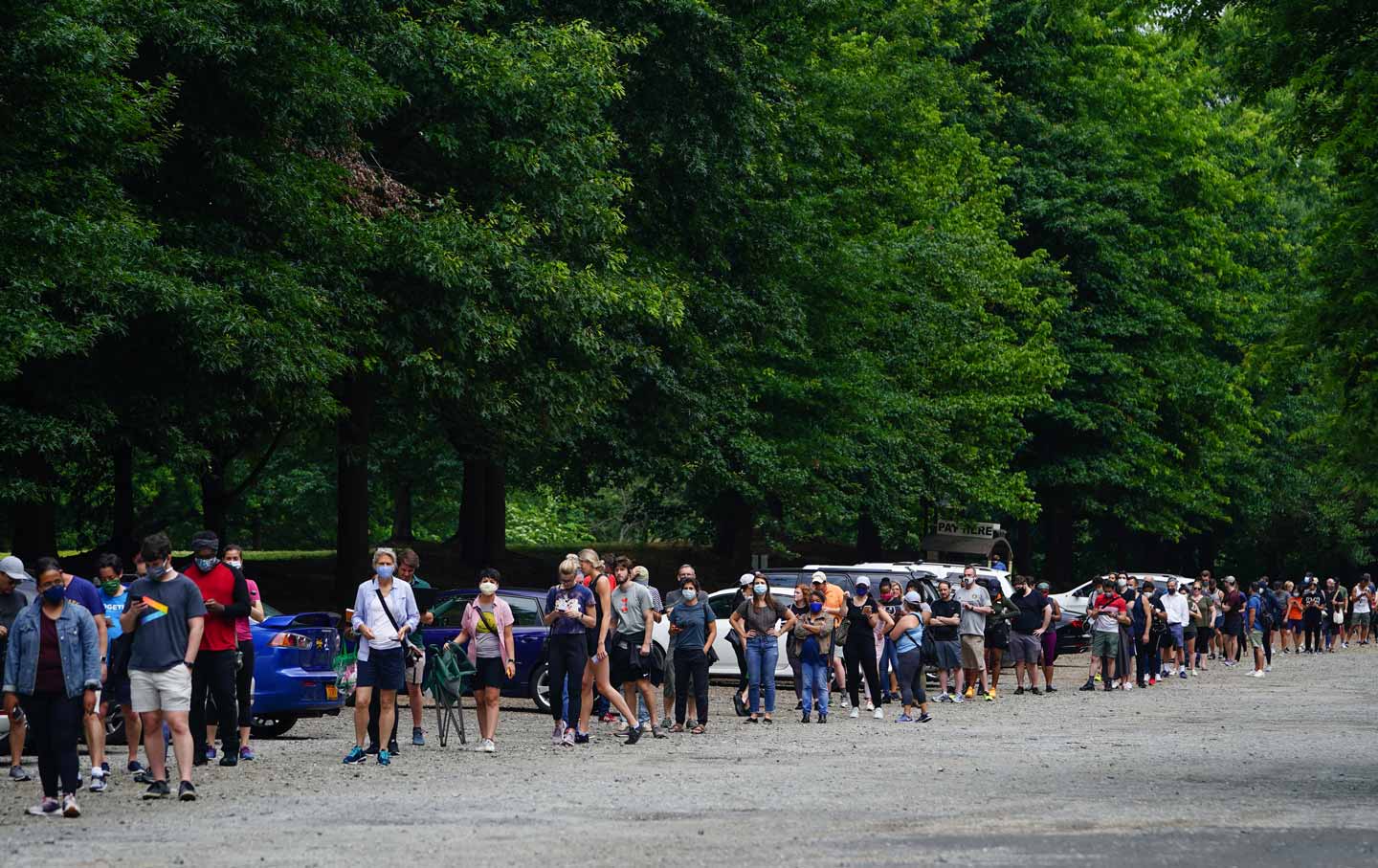 LaTosha Brown, the cofounder of Black Voters Matter, was out until past midnight last Tuesday, helping Georgians who had waited in line for five hours or more to cast ballots in a primary where voters in predominantly African American precincts faced unconscionable delays. Now, she wants answers—and action. “The voter suppression we witnessed in Georgia,” she says, “is a dress rehearsal of what will come in November unless we work together and demand accountability now.”

In Georgia, calls for accountability are mounting. And they are being directed at Republican Secretary of State Brad Raffensperger, whose office “organizes and oversees all election activity” in a state that has seen too many mangled elections over too many years. The Rainbow Push Coalition, which has a long history of working in Atlanta, is making the case for a recall election that would remove Raffensperger from his position.

“Accountability is vital to fix Georgia’s broken election system ahead of the August 11, 2020 runoffs that will determine important elections for school board members, district attorneys, judges and sheriff races across the state, and certainly in time for the November 3, 2020, general election which will determine the President and U.S. Senate,” declares a petition circulated by the group that was founded by the Rev. Jesse Jackson, the veteran civil rights campaigner and 1984 and 1988 presidential contender.

Raffensperger, the petition asserts, “has proven himself incompetent to lead state elections after promising to modernize and protect voters.”

The effort to recall Raffensperger offers a reminder that accountability must be a part of the fight against voter suppression.

Election officials have to understand that they cannot oversee a “Complete Meltdown”—as the front-page headline of The Atlanta Journal-Constitution declared on the morning after Georgia’s primary voting was marred by undelivered absentee ballots, polling places that did not open on time, malfunctioning machinery, and unbearably long lines—and get away with it. Until that understanding is established, little will change. And make no mistake: There is a lot that needs to change.

Our election systems are vulnerable, as electoral fiascos in April in Wisconsin and in Georgia last week confirm. Those vulnerabilities will be exploited by cynical election officials—and their legislative and judicial allies—just as they will be neglected by inept election officials. Without demands for accountability, the troubles we now see in individual states could become a national crisis in a November election whose stakes will be dramatically higher. 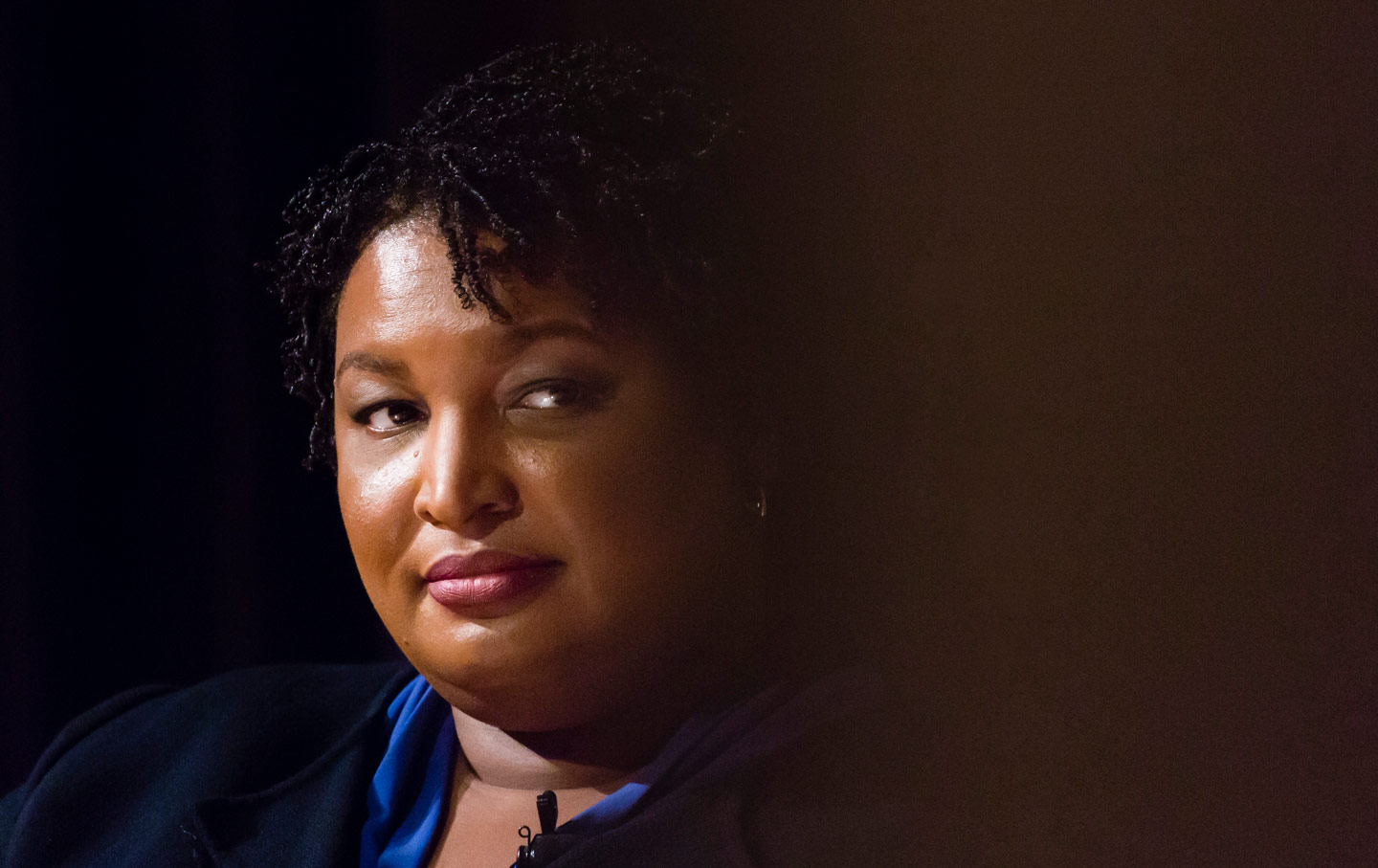 Carolyn Bourdeaux, a college professor who is the Democratic candidate in a competitive Atlanta-area congressional district, announced after the June 9 primary, “What has happened in this election is outrageous and completely unacceptable, and I know I speak on behalf of many in this state that we are sick of it. Mr. Raffensperger has failed at his most important responsibility: administering safe, fair, and efficient elections. For that reason, I am calling on him to resign immediately as Georgia Secretary of State.”

On Monday, at an Atlanta event that focused on police violence and voter suppression, Wanda Mosley, of Black Voters Matter, addressed the secretary of state with a blunt message: “If you aren’t able to do your job, resign.”

That is a vital point. The June 9 primary was the starting point for an election year in which Georgia voters will elect two US senators and cast critical ballots in a presidential election where the state could finally be a key battleground. There’s a lot of voting to come, and Raffensperger has already proven that he lacks the skills and the sense of duty that are required to make democracy work for all the people of Georgia.

As the Rainbow Push Coalition notes, his “dereliction of duty and basic ineptitude made casting a ballot a chaotic nightmare for voters with inaccurate voter registration information provided on the Secretary of State website, malfunctioning voting machines, long lines, several hour wait times, failure to process and timely mail applications for absentee ballots, polling sites that opened late, insufficient numbers of back up paper ballots, and inadequate training of county poll workers who provided incomplete, inaccurate or false information to voters.”

Georgia has a reasonably straightforward recall process. A campaign to recall a sitting elected official must gather petitions signed by at least 15 percent of the number of people who voted in the last election for the post held by that official. In Georgia, that means that a roughly 600,000 signatures—a large number, but not an overwhelming one—must be collected over the course of three months. “We need 583,000 valid signatures of registered Georgia voters,” explains the Rainbow Push Coalition. “Once the signatures are collected, a question will appear on the November ballot asking if Brad Raffensperger should be recalled as the Secretary of State. The answer is Yes.”

The recall campaign, says Georgia attorney Robert Patillo, the Southeast regional director for the Rainbow Push Coalition, lays down an accountability marker for Georgia and the rest of the United States. “This is important for the whole country,” he says. “It sends a message that voter suppression has consequences.”