Taleavia Cole—sister of Alvin Cole, who was killed earlier this year by a Wauwatosa police officer—leading a protest in Milwaukee. (Photo by Megan Magray)

In the early months of 2020, this year’s Democratic National Convention (DNC) in Milwaukee seemed primed for a showdown between the moderate and progressive wings of the party. Organizers with the Coalition to March on the DNC, an alliance of over 70 groups from around the country, initially planned for a huge turnout, and hoped to use the occasion to advance left policy demands.1

Of course, history had a different plan. In response to Covid-19, the party dramatically scaled the convention’s physical presence in Milwaukee down to virtually nothing. And instead of centering the Democratic presidential ticket, the protests felt more like an extension of this year’s nationwide protests against police violence than a repeat of 2016, when pro-Bernie partisans descended on Philadelphia, and Sanders delegates staged a dramatic walkout.2

The first three days of the 2020 DNC were marked by banner drops and other minor actions, but the last day of the convention saw its biggest direct action. On Thursday, August 20, about 500 protesters gathered in Red Arrow park, the site of the 2014 police killing of Dontre Hamilton, a 31-year-old mentally ill Black man.3

Ryan Hamann, a Wisconsin organizer with the Freedom Road Socialist Organization and cochair of the Coalition to March on the DNC, had been involved in organizing the protest for months. He acknowledged that turnout was lower than once expected, but also that the event’s focus had evolved. “We decided that it would make sense for us to make the emphasis of our action the one point of unity that deals with police crimes,” he said. “We want to pressure Joe Biden and the Democrats to put an end to killer cops.”4

A small handful of protesters had traveled to Wisconsin from around the country, including a notable showing of the modern reincarnation of Students for a Democratic Society (SDS)—a much diminished iteration of the organization that once played a key role in the tumultuous 1968 DNC protests in Chicago. “The Democratic Party says that they’re for Black lives,” said Taylor Cook, a Tampa Bay SDS member who had flown in for the protest, “but what have they done for Black people in this country?”5 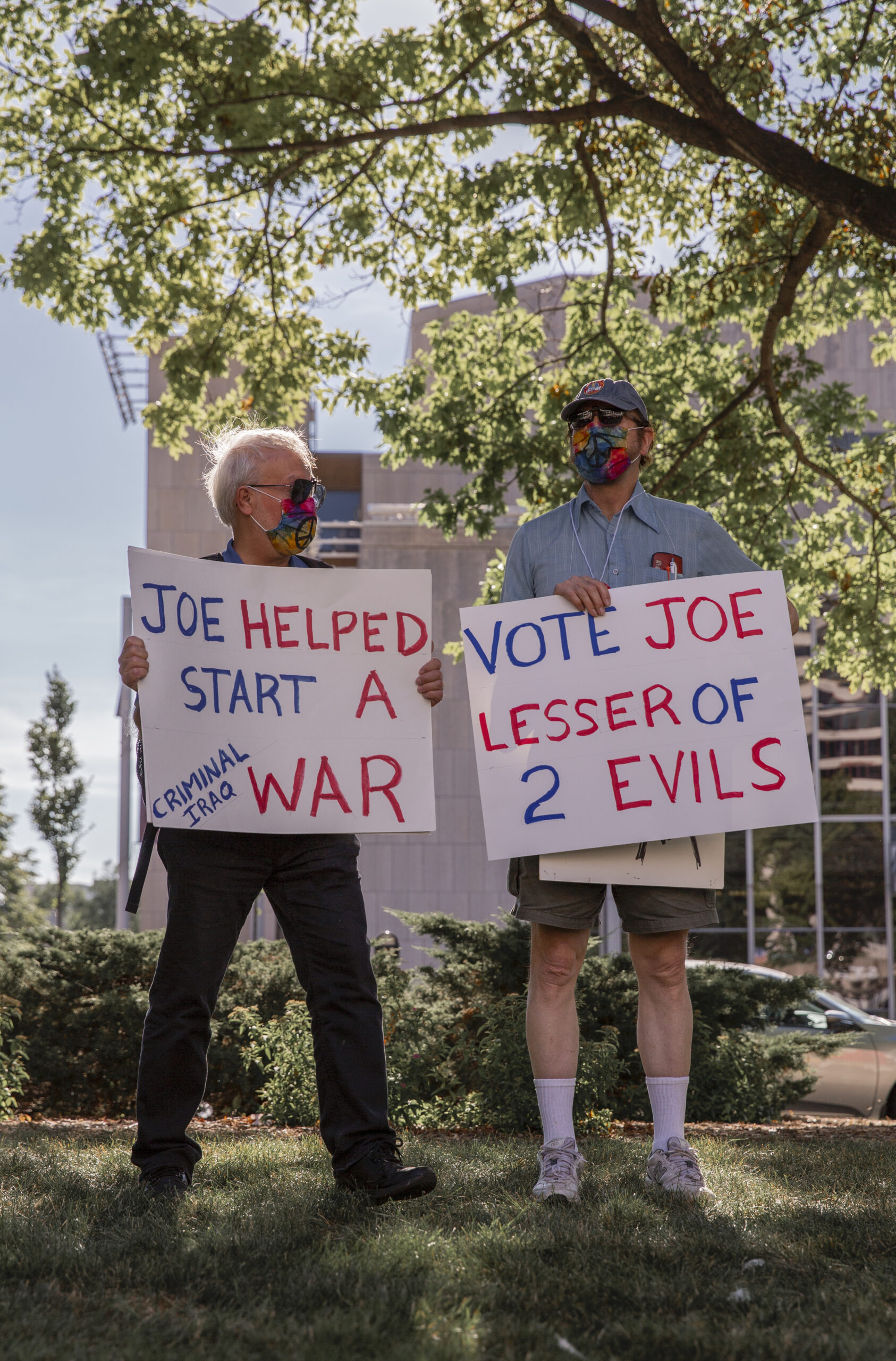 A central tenet of Biden’s centrist pitch to progressives is the idea that Democrats are accountable to social pressure—but on the final day of the convention, as Biden accepted the nomination, there seemed to be little dialogue between the party and its grassroots base.6

Although the protest was occasioned by the DNC, and there was a noticeable contingent of Sanders supporters, most attendees seemed to have little faith in the idea that the National Democratic Party might respond to their demands—especially now that the convention had gone virtual, insulating the party from physical confrontation. Rather than “pressuring Joe Biden,” most protesters seemed concerned with local actors in one of America’s most racially segregated cities, such as Milwaukee mayor Tom Barrett, who has gone easy on the city’s police force, and Alfonso Morales, the city’s police chief, who was recently demoted to captain after his excessive response to anti-police protestors.7

Another consistent target was Officer Joseph Mensah of the Wauwatosa Police Department in suburban Milwaukee, a cop who has killed three young men over the past five years: Jay Anderson Jr., Alvin Cole, and Antonio Gonzales, collectively referred to as “Thee Three” by local activists. The most recent shooting, of Cole, took place in early February, and it took months of protests before Mensah was finally suspended—albeit with pay—on July 15. Cole’s parents, as well as the families of Anderson and Gonzales, are still holding out hope that Mensah will face real justice.8

“We cannot focus on a democratic convention when a national crisis is going on,” said Taleavia Cole, Alvin’s sister. “Joe Biden, Ms. Harris, do you know what’s going on here? Do you know that one officer killed three people of color within five years?”9 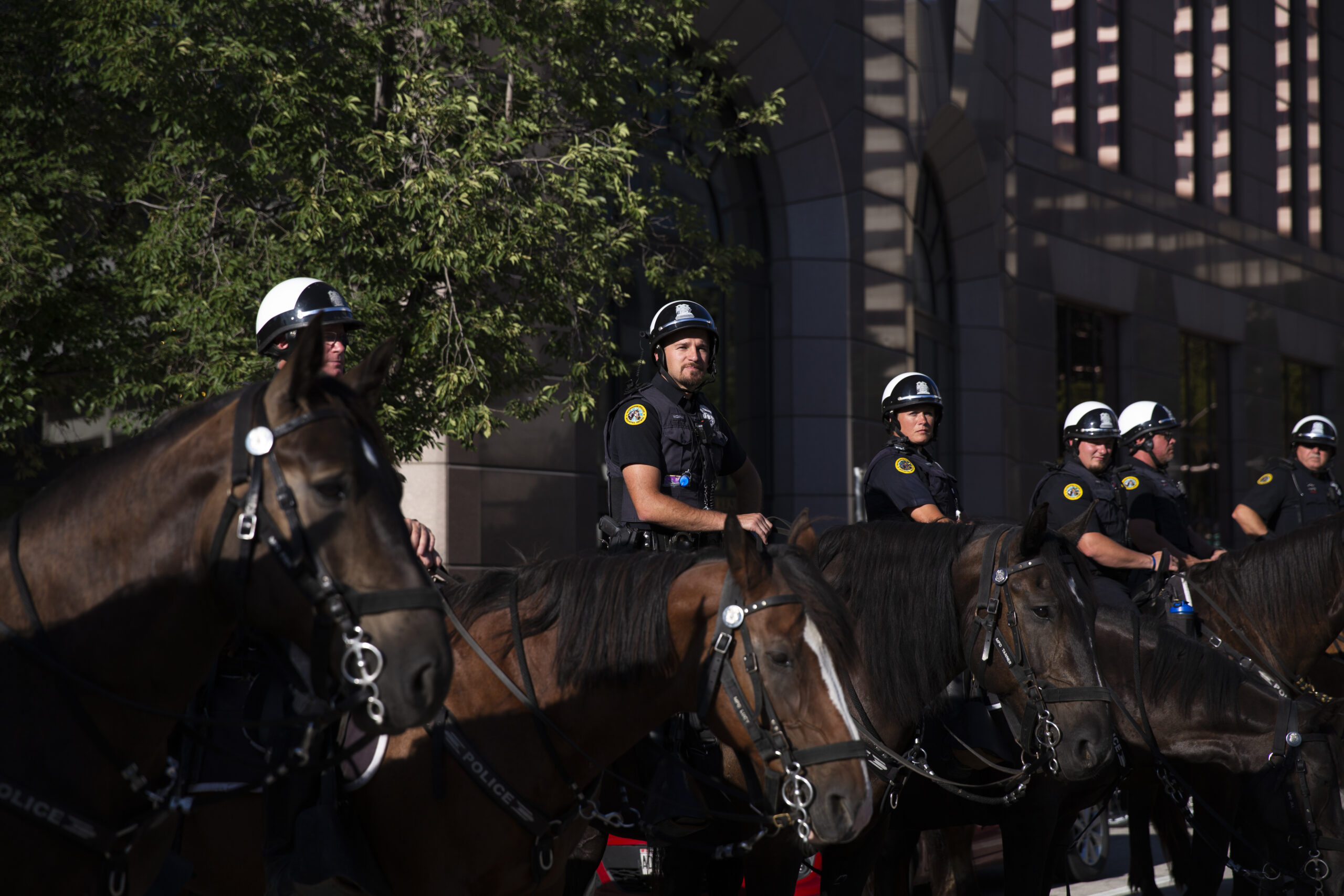 If the families of victims of police violence have found renewed strength to resume their fights for justice, it was not in the rhetoric of elected officials, but in the solidarity of a movement mounting across the country. “Since George Floyd and Breonna Taylor got killed, the world has been listening,” said Jay Anderson Sr., whose son Jay Jr. was killed by Mensah in 2016.10

Several members of the Oneida Nation of Wisconsin also told the the gut-wrenching story of Jonathon Tubby, a 26-year-old Oneida man who was killed by a Green Bay police officer in 2018. Last year, a prosecutor said that Officer Erik O’Brien acted lawfully when he shot a handcuffed Tubby five times inside a police station.11

After leaving the park, the march crossed the Milwaukee River to the county jail to demand justice from a police department that has repeatedly dodged accountability. Then, after circling the streets of downtown Milwaukee, the group pushed up against the barricades surrounding the Wisconsin Center, whose 190,000-square-foot exhibition hall was hosting the DNC’s minuscule in-person footprint, which on Thursday included a speech by Senator Tammy Baldwin.12 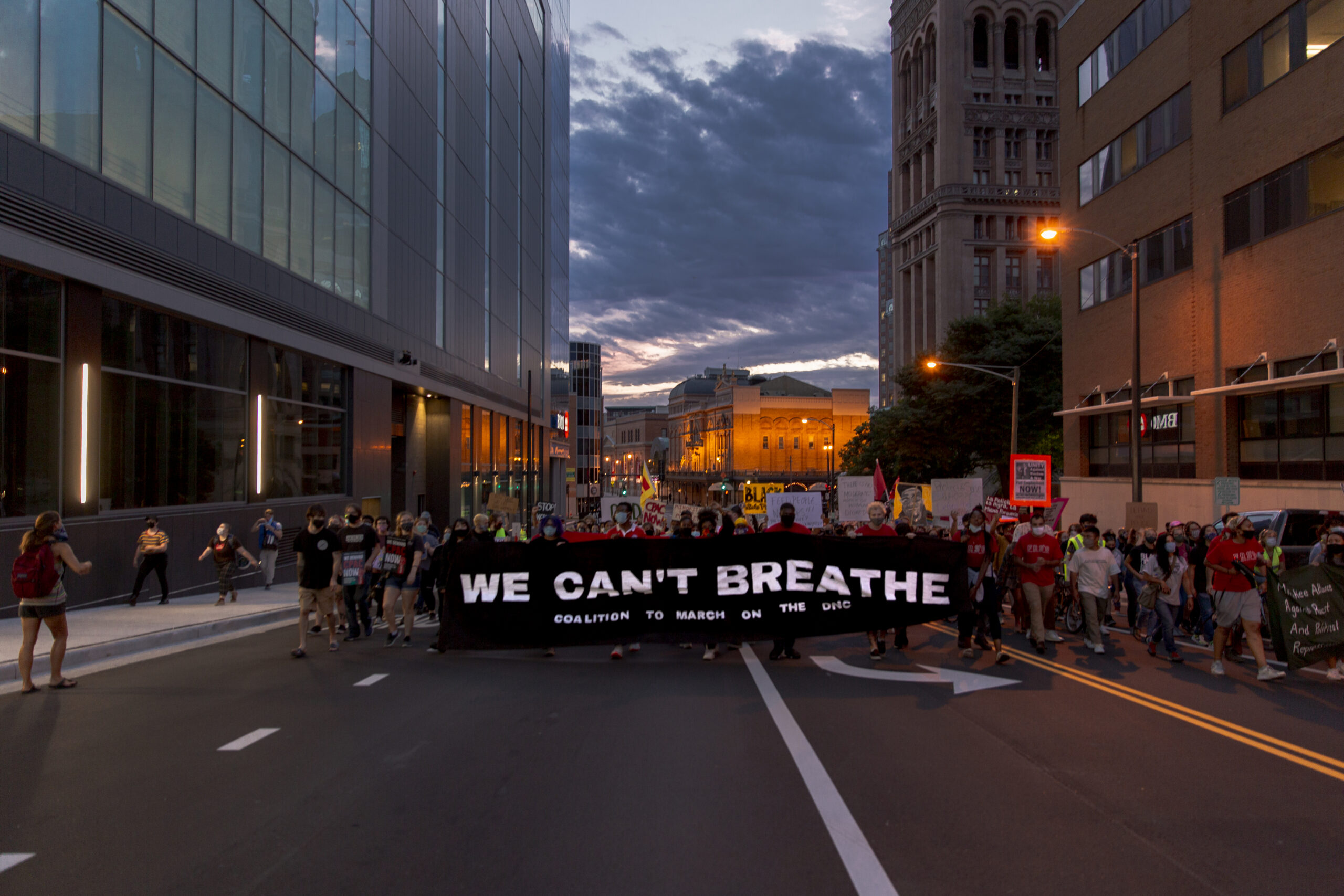 “We’ll admit, we were a little disappointed when we found out that Joe Biden and Kamala Harris weren’t going to be here in Milwaukee,” said Omar Flores, cochair of the Coalition to March on the DNC. “While the politicians stay home, we’re still out on the streets fighting.”13

After a few speakers, the march picked up again, moving back across the river to Milwaukee’s Homeland Security building, which houses Immigration and Customs Enforcement officers as well as federal agents deployed to the city as part of Operation Legend, a Trump program that sends federal agents to do law enforcement work in American cities.14

From the vantage of the streets, yesterday was about building people power in a direct sense, not just making appeals to professional representatives. The protesters demonstrated one way to effectively stand up against a center of power without a physical presence, like this year’s virtual convention: by grounding the response in solidarity, tangible struggles, and winnable objectives. At the end of the day, the DNC was just a pit stop.15