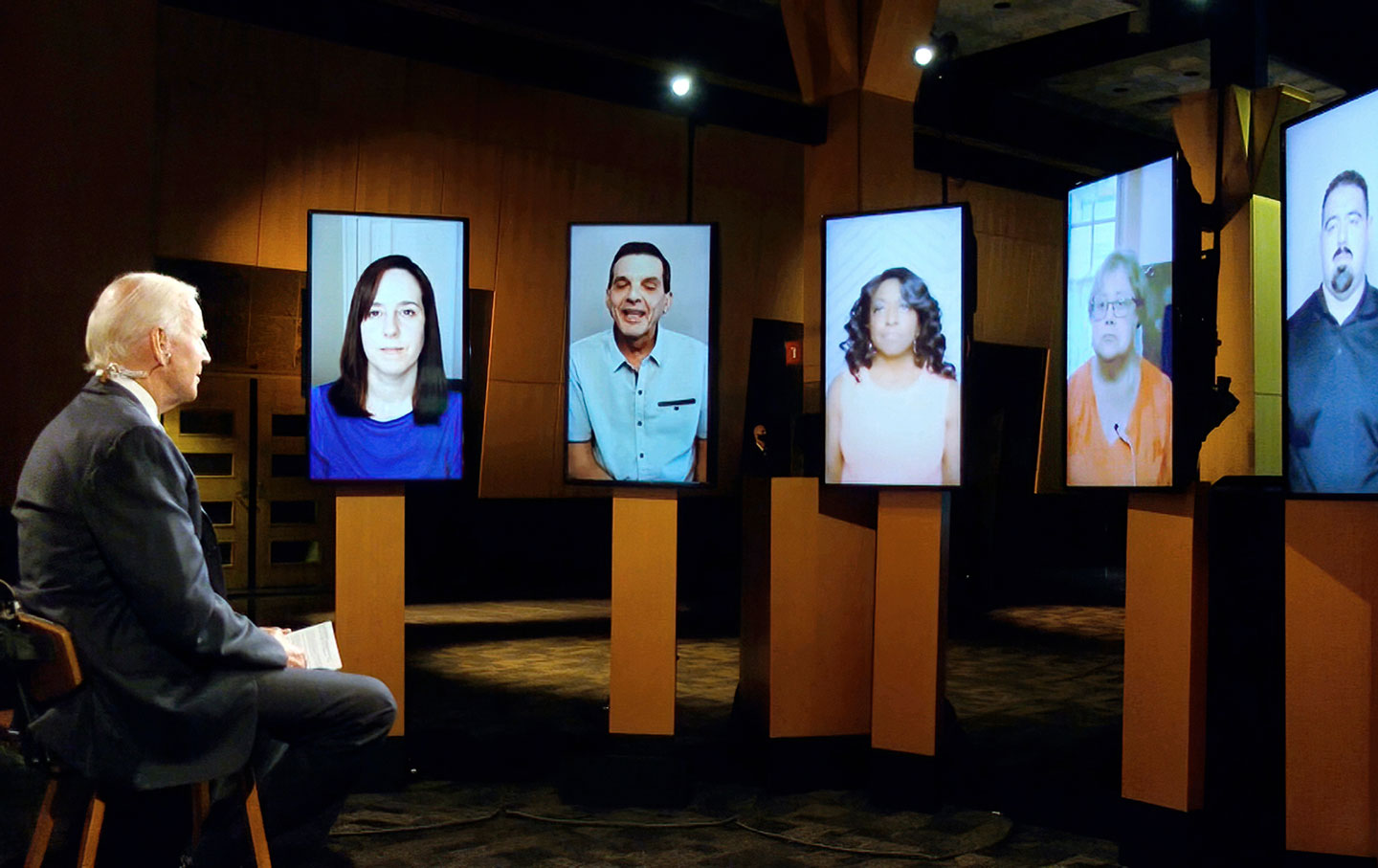 On the second night of a Democratic National Convention where party leaders have gone out of their way to foster an image of unity, Democrats nominated Joe Biden for the presidency and then he moderated a discussion about expanding access to health care.

But a substantial number of dissenting Democratic delegates—including many rising stars from the party’s progressive wing—urged him to make a stronger stand on the issue. The delegates, some of whom were Biden backers, weren’t trying to trip up the nominee’s run against President Trump and the Republicans. They were trying to strengthen it by urging the former vice president and the Democratic Party he now leads to meet the moral and the practical demands of an urgent moment shaped by the coronavirus pandemic and mass unemployment.

The dissenting Democrats sent their message to Biden by voting “no” on a party platform that fails to make a clear commitment to developing and instituting a single-payer “Medicare for All” health care system. They did not have the critical mass to block the platform. But that did not prevent them from making morally sound and politically practical arguments for the bolder approach that it is supported by 69 percent of all Americans and 88 percent of Democrats.

“I can’t in good conscience support a platform without Medicare for All,” explained Representative Ro Khanna, a leading progressive in the House who serves as a cochair of the California delegation to the convention. “In this pandemic, millions have lost their jobs and their health coverage. Now is the moment to say health care shouldn’t be dependent on your employment. Health care should be a universal right.”

I constantly hear from constituents demanding we push for a single-payer system and away from this for-profit system that is leaving people to suffer and die just because they cannot afford health care. As a party, we must push for a future where every resident has the ability to thrive. That means we need a platform that works to rid our society of oppression and greed. Unfortunately, in my view this platform does not do enough.

Before the convention, more than 700 delegates signed a petition—circulated by Progressive Democrats of America, RootsAction.org, and other groups—that featured a “pledge to vote against any platform that does not include a plank supporting universal, single-payer Medicare for All.” In the days running up to Tuesday night’s presidential nomination roll-call vote and presentation of the platform, a number of delegates to this year’s virtual convention tweeted images of ballots with their “no” votes. Many attached messages signaling their frustration with a platform that says, “Democrats believe that health care is a right, not a privilege, and our health care system should put people before profits” but that only offers a public option.

Most of the “no” votes on the platform came from Sanders backers like Cori Bush, who just made national headlines after beating veteran Representative Lacy Clay in a Missouri primary. “ I’m proud to have voted for @BernieSanders, but I had to vote against the platform,” tweeted Bush. “My people are dying [and] I cannot support a platform that does not include #MedicareForAll, which would save lives. Tens of thousands of lives. Literally.”

Sanders has endorsed Biden. Yet, on Tuesday night, before the roll call of the states was conducted, the senator’s name was placed in nomination by former United Auto Workers President Bob King, who told the country, “Bernie believes health care is a human right, and should not be contingent on a job.” That nomination was seconded by Representative Alexandria Ocasio-Cortez, who referenced guaranteed health care as part of a 95-second statement that outlined a full progressive agenda:

Good evening, ​bienvenidos​, and thank you to everyone here today endeavoring towards a better, more just future for our country and our world.

In fidelity and gratitude to a mass people’s movement working to establish 21st century social, economic, and human rights, including guaranteed health care, higher education, living wages, and labor rights for all people in the United States; a movement striving to recognize and repair the wounds of racial injustice, colonization, misogyny, and homophobia, and to propose and build reimagined systems of immigration and foreign policy that turn away from the violence and xenophobia of our past; a movement that realizes the unsustainable brutality of an economy that rewards explosive inequalities of wealth for the few at the expense of long-term stability for the many, and who organized an historic, grassroots campaign to reclaim our democracy.

In a time when millions of people in the United States are looking for deep systemic solutions to our crises of mass evictions, unemployment, and lack of health care, and ​espíritu del pueblo​ and out of a love for all people, I hereby second the nomination of Senator Bernard Sanders of Vermont for president of the United States of America.

But even some of his own delegates were signaling that he needs a bolder platform.

“I am Biden delegate,” announced former Georgia state senator Vincent Fort. But, he added, “ I couldn’t vote for platform that didn’t support Medicare for All when 27 million have lost job based health insurance in crisis.” Support for Medicare for All, said Fort, is a “moral imperative.”