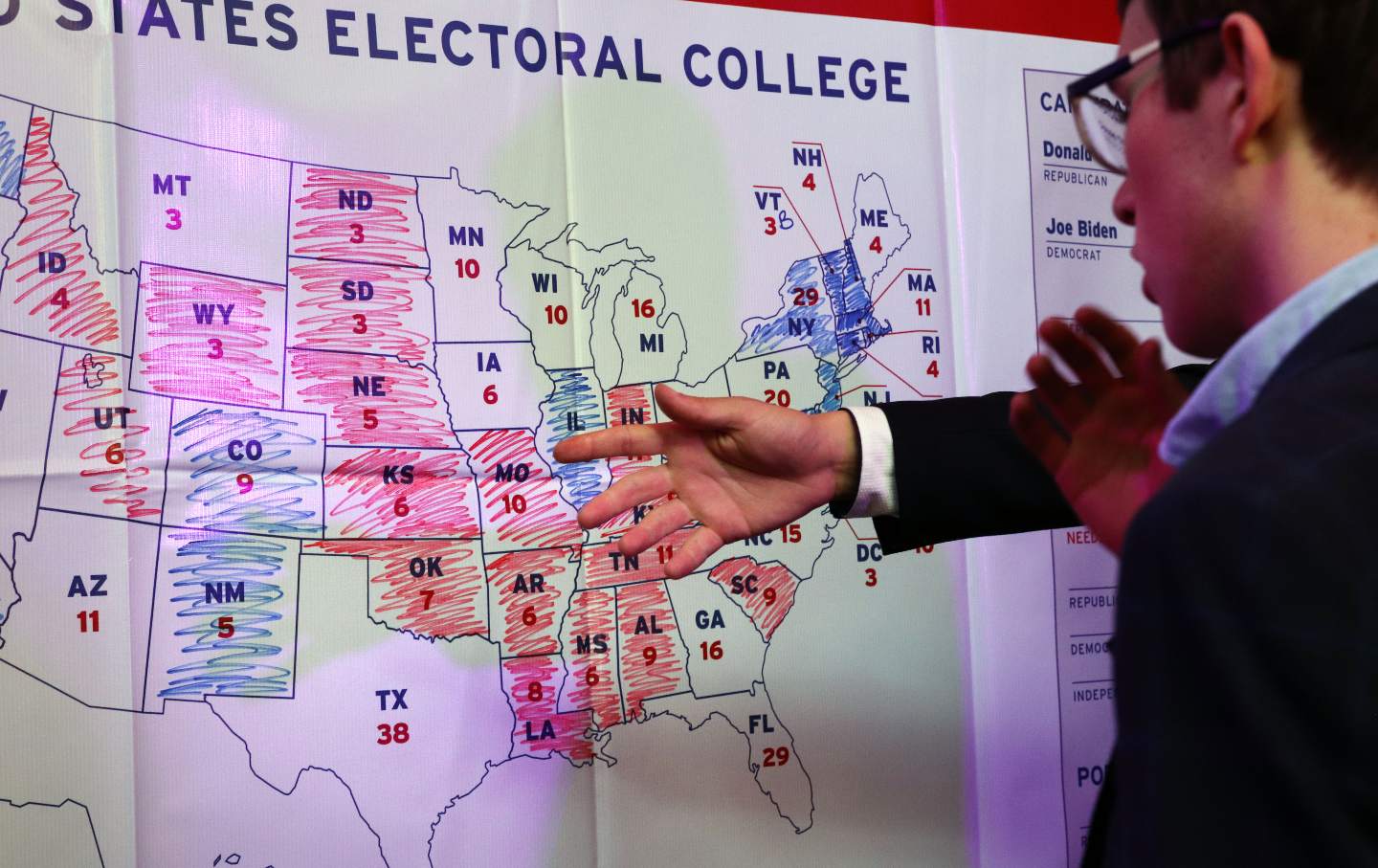 The Constitution includes mechanisms meant to water down the popular will—like the Electoral College. (Lynn Grieveson / Newsroom via Getty Images)

If the United States were a democracy, this election wouldn’t have been close. The fate of the world wouldn’t depend on a handful of suburban precincts. The winner would have been known immediately. With a comfortable lead well into the millions, the president-elect and his party could have moved on to crafting and passing the program that gained them an undeniable mandate.

But we do not have a democracy, and not because Trump undermined it but because the framers of the Constitution did not create one. They felt the Articles of Confederation left too much power in the hands of economic populists in the states, and so they constructed a system meant to serve and protect the rich. The Constitution was designed specifically to prevent, as James Madison put it in the Federalist Papers, “an abolition of debts” or “an equal distribution of property” from passing into law.

Nearly two and a half centuries on, the antidemocratic provisions of the Constitution are still working as the framers intended. Even in an era of global capital, the wealthy benefit from a sclerotic, dysfunctional government. When early election results suggested a Joe Biden presidency with Republicans maintaining their grip on the Senate, the Associated Press reported that “stocks rallied on Wall Street as investors embraced the upside of more gridlock in Washington.” Divided government, these investors seem to think, will derail what Madison called “wicked or improper projects”: the abolition of student debt, higher taxes on the wealthy, the Green New Deal.

More than progressive economic measures, however, democracy itself is being thwarted by the Constitution. In the summer of 1787, opposition to rule by the people was one of the few things the delegates in Philadelphia could agree upon. They spent the first few days of the convention reassuring one another of their antidemocratic credentials. Elbridge Gerry of Massachusetts was typical in deeming democracy “the worst of all political evils.”

The Constitution they designed included provisions and mechanisms meant to water down the popular will and block a more equal distribution of wealth. The president would be selected not by the people but by an Electoral College whose members would be appointed by the state legislatures. The Senate, with equal votes for every state, large and small, would ensure that citizens of large, populous states had far less influence over legislation and judicial appointments than those in smaller ones. Alexander Hamilton wanted its members to serve lifetime terms, for “nothing but a permanent body can check the imprudence of democracy.” Though he opposed giving each state equal votes, James Madison thought the upper house should serve “as a check on the democracy,” a way to impede the influence of those who “labor under all the hardships of life, and secretly sigh for a more equal distribution of its blessings.” 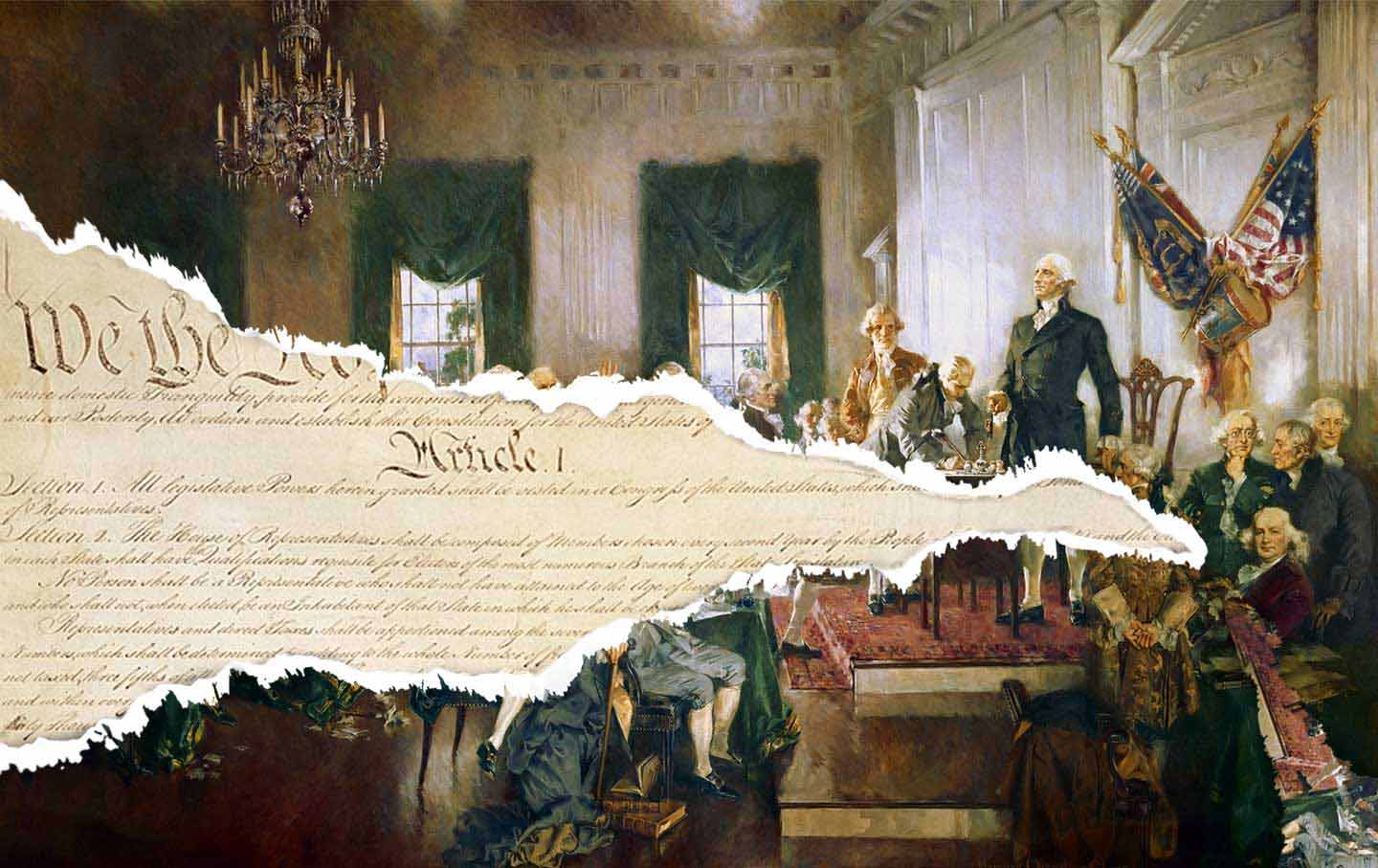 Far from resolving a decade of paralysis and crisis, the 2020 election has only confirmed doubts about the stability of American democracy, institutions, and the constitutional order. The Democrats’ apparent failure to recapture the Senate—assuming anything less than a miracle in Georgia this January—removes the possibility, for the foreseeable future, of steps the party might have taken to offset its structural disadvantages, such as expanding the courts and admitting Puerto Rico and the District of Columbia as states.

Merely ousting Trump is not enough without addressing more fundamental weaknesses in our political system, especially an outdated Constitution that continues to serve a minority of wealthy and white citizens and to curb any movements that might threaten their wealth and power. The antidemocratic Senate, for example, is the main obstacle to passing serious legislation on climate change. Without a practical plan for revising the Constitution, Democrats will be condemned to play by rigged rules.

This is a 1780s-like moment in which the existing Constitution seems incapable of responding to crises yet is too difficult to amend. The choice Americans faced then, between national rupture or national renewal, is the one we face now. We can still choose the latter, but it will require devising new institutions that empower the many instead of the few. A constitutional convention may be required to fix some of the flaws of the original charter. The Senate has to be abolished or otherwise deprived of its veto over national affairs. Term limits on the Supreme Court should be instituted so that each presidential term sees the same number of vacancies. The House of Representatives has to be expanded, as it has not been since 1911, when the country had less than one-third of its present population.

To be sure, even a constitutional convention may not be enough to reverse the country’s descent into dysfunction, perhaps even dissolution. It could itself trigger a breakdown of the political order. Yet that might be a risk worth taking if the United States is to survive for any kind of worthy purpose, such as leading a global effort to avert climate catastrophe. More than a new president, we need a radical reimagining of what this country can and must become—nothing less than a full-scale attempt at national renewal.