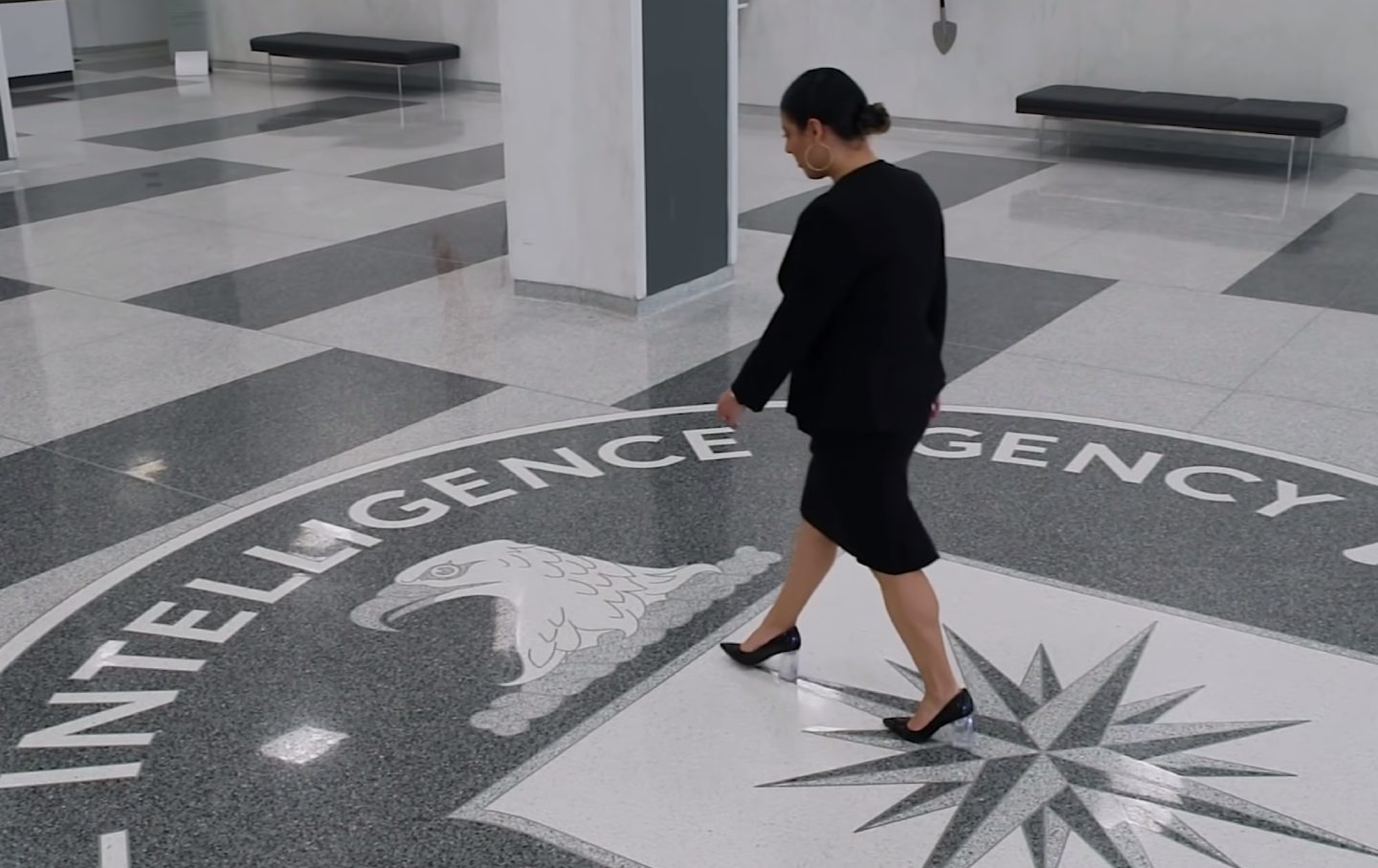 A still from the “Humans of CIA” recruitment video released in March. (CIA / YouTube screengrab)

My homie Ofelia Cuevas sat spellbound before the CIA recruitment video that folks are still fussing about a week later. The video featured a black suited, code-switching, Latina with plenty of attitude—the kind of attitude Ofelia likes to inspire in her Ethnic Studies students at the University of California, Davis. The confident, thirtysomething woman in the video also wore pumps and big golden hoop earrings. Many a working-class homegirl wears the earrings as a way of embracing their inner Aztec warrior goddess in the parts of the Southwestern United States, like California, that used to be called Mexico. Ofelia and I grew up around fierce, young women who sported hoop earrings back in the 1980s, just before I decided to join war against a US-backed fascist military dictatorship in El Salvador.

She listened intently as the video’s violin music crescendoed to the moment when the intense, unnamed Latina delivered the fury of her message in incantatory tones:

I am a woman of color. I am a mom. I am a cisgender millennial who’s been diagnosed with generalized anxiety disorder. I am intersectional.

“At first,” Ofelia, a scholar of race and media, told me, “I couldn’t believe it. I thought it was a joke. But as I kept watching, I thought, ‘Oh my God—it’s real.’” She added: “The fucking CIA is trying to be ‘woke.’”

Ofelia’s response to what some are calling the “CIA’s “woke” video reflects not just her disbelief but also the acknowledgment of something else, something far more consequential and dangerous: that the Age of Intersectional Empire is upon us.

The CIA video—one of over a dozen “Humans of the CIA” recruitment videos featuring Black, Asian Pacific Islanders, queer, Indigenous, and other identity groups—reflects a new moment in the long history of identity politics. This isn’t the first time the US state is deploying racial and other identity groups to further imperial domination and control. But the scale and speed with which the Biden administration is abandoning the nakedly visible white supremacist mode of governance and domination—see Trump presidency—fits our times. This hipper, more “intersectional” look almost makes one forget that the US government is still in the business of empire.

Some, for example, celebrate the fact that more than 30 percent of ICE agents and about 50 percent of Border Patrol agents in the United States are Latinx. Others seem to forget that the appointment of Alejandro Mayorkas, a Cuban American, as secretary of the Department of Homeland Security does nothing to dismantle or abolish the same department that helped militarize the police that killed George Floyd in Minneapolis and attacked Black Lives Matter protesters in Ferguson. In the vast world that lives outside of progressive circles, there are millions of people who have emotional reactions to Army and Marine recruitment ads featuring proud Black and Latinx soldiers.

The theory of intersectional empire seems to be premised on this idea: The more the government looks and feels like the rest of us, the more difficult it is to criticize and attack it. Nowhere is this clearer than in the “diversity” that has reached the very top levels of government in Biden’s cabinet. Such a situation might make it difficult to criticize the Biden administration, but we’ve already learned about the contradictions posed by the rise of intersectional empire thanks to Barack Obama.

Those of us who criticized Obama’s immigration policies—record-breaking deportations, raids, mass child separation and caging, border militarization—were subjected to attacks by Democrats and their supporters. Five months into Obama’s presidency, my reporting about his expansion of Secure Communities and 287(g)—deportation programs he promised to end—earned me accusations of being “anti-Black.” Over time, I watched as Obama got some criticism for his deportations, but nary a word was said about truths that have proven inconvenient to many liberals: that Obama initiated the practices of mass caging and mass separation of thousands of Central American children and parents, whose treatment many liberals loudly condemned as “state terrorism” when those policies were continued and expanded by Trump.

Overcoming the national and geopolitical dumpster fire left by the Trump presidency makes Biden’s intersectional approach to governance all the more sensible, according to Stanford professor Vaughn Rasberry. Biden’s approach, he says, “is updated for the moment we’re living in. After 4-5 years of unrestrained white supremacy, xenophobia and oppression, it’s not difficult to see how this has enormous appeal. It enables [the] administration to both communicate alternative values while also continuing the hegemonic trajectory the U.S. has had in the world since World War Two—or even earlier.”

Rasberry’s most recent book, Race and the Totalitarian Century, examines how W.E.B. Du Bois, Shirley Graham, and other writers chose to align with the communist bloc and the global decolonization movement as a way to counter United States government efforts to recruit African Americans in the fight against Nazism and Stalinism. These writers understood that a new mode of empire was ascendant, and that it understood the complex working of race and identity enough to use them for imperial ends.

One major consequence of the Cold War politics of race and empire, says Rasberry, is “the marginalization of more radical voices” like those of Richard Wright, Paul Robeson, and others. A more recent example of this marginalization is that of Cornel West, an open critic of neoliberalism and the American empire who formerly enjoyed countless invitations to appear on major news shows. However, once he started criticizing Obama and other examples of what he called “Black faces in high places,” he has not enjoyed the same media attention.

We’re at the front end of a very challenging moment in the history of hegemony and domination, a moment that requires more questions than answers.

“It’s easy to see the historical continuities,” says Rasberry. “The key question is what is new about this moment? Is it really just a matter of style and part of the zeitgeist or is it something genuinely new? I’m not sure.”

Neither am I. But the debates about intersectional empire are just beginning. I recently noticed this through a picture making the rounds on Twitter. It shows four Navy servicemen standing, in battle gear, before a helicopter with a rainbow flag draped on it. The tweet says, “History was made on Friday with the first ever all gay @USNavy helicopter crew.” I see the grey banality of the helicopters and can’t imagine it would’ve made any difference to the peasants bombed in El Salvador whether there were rainbow flags on them.