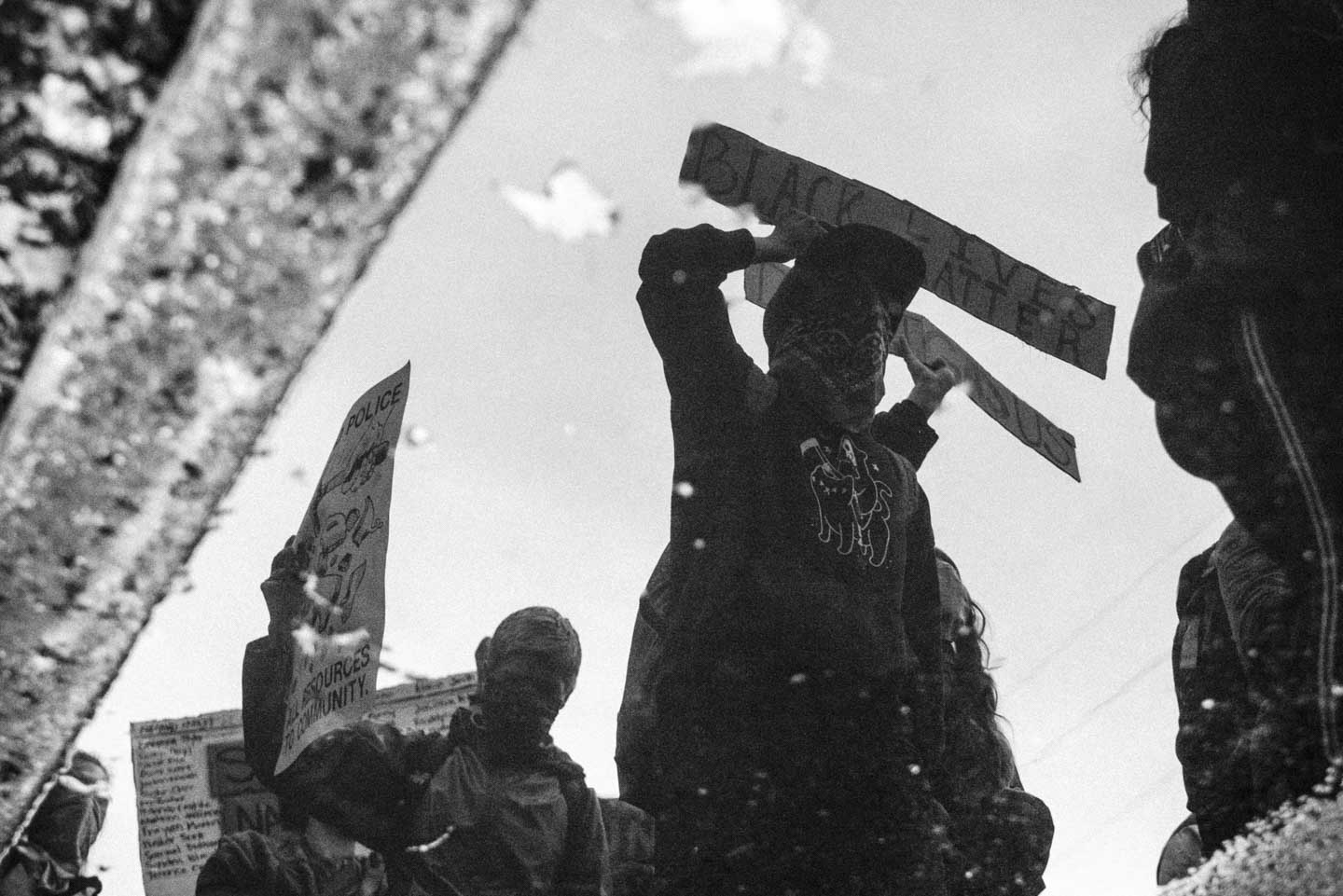 The Nation and Magnum Foundation are partnering on a visual chronicle of untold stories of the coronavirus crisis and the struggle for racial justice—read more from The Invisible Front Line.—The Editors

ortland, —I haven’t seen this kind of energy since Standing Rock. In the weeks since George Floyd was murdered in Minneapolis, my city has exploded with anger, empathy, and a level of organizing that is long overdue. With Black youth leading the fight, this movement is demanding justice for Floyd, justice for Breonna Taylor, justice for Ahmaud Arbery, justice for all African Americans whose lives have been cruelly cut short by the police and vigilantes. 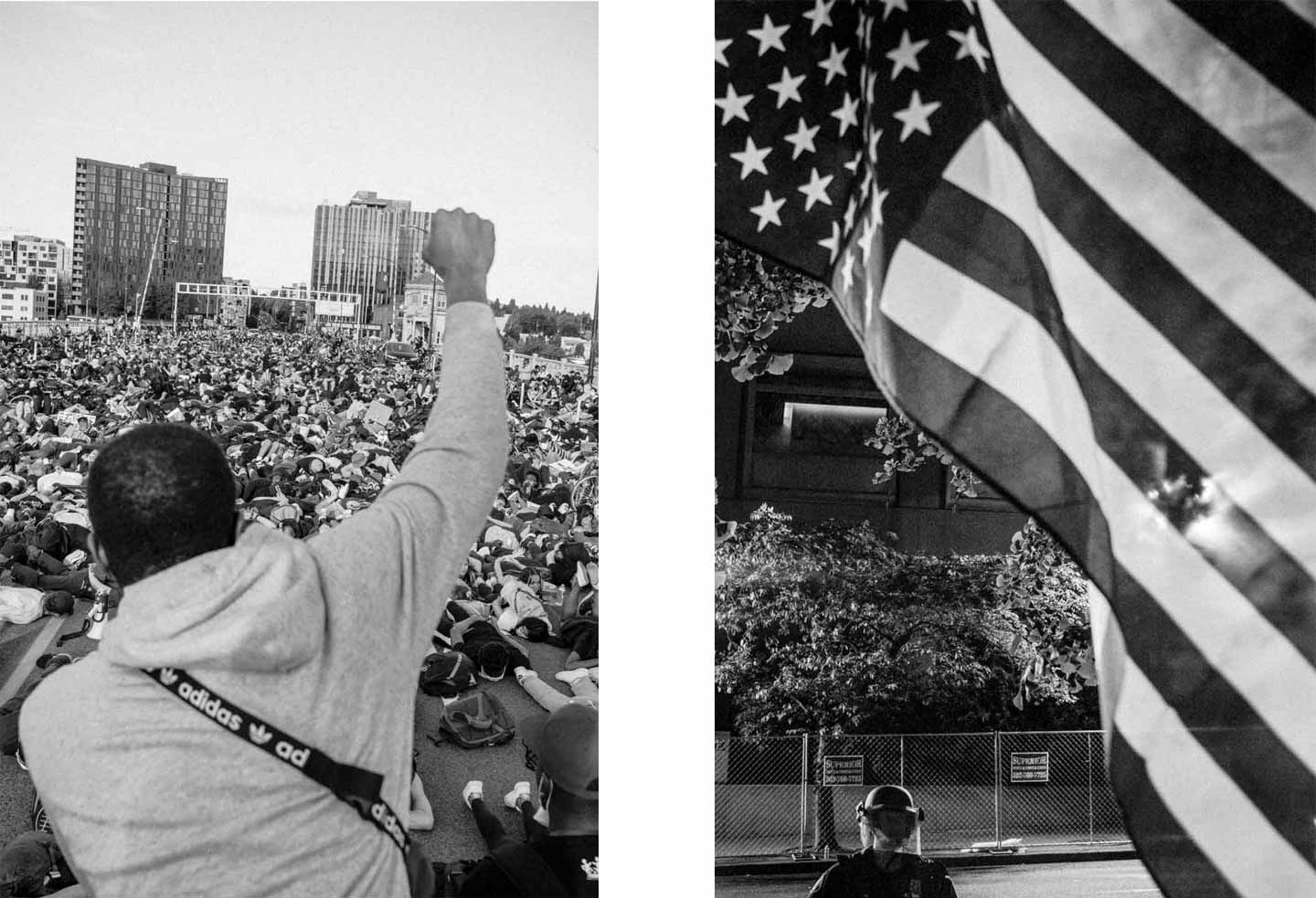 At first I joined these demonstrations just to show my support. As a photographer, I believe strongly that my work should give rather than take, and I didn’t want to be jumping in to document a movement without understanding what my role could be in it. There were plenty of Black photographers already documenting the protests across the country; how did I fit in as an Indigenous storyteller? So I showed up: I went to the marches and listened, talked to activists, and slowly started making images that I thought could be helpful for the movement. 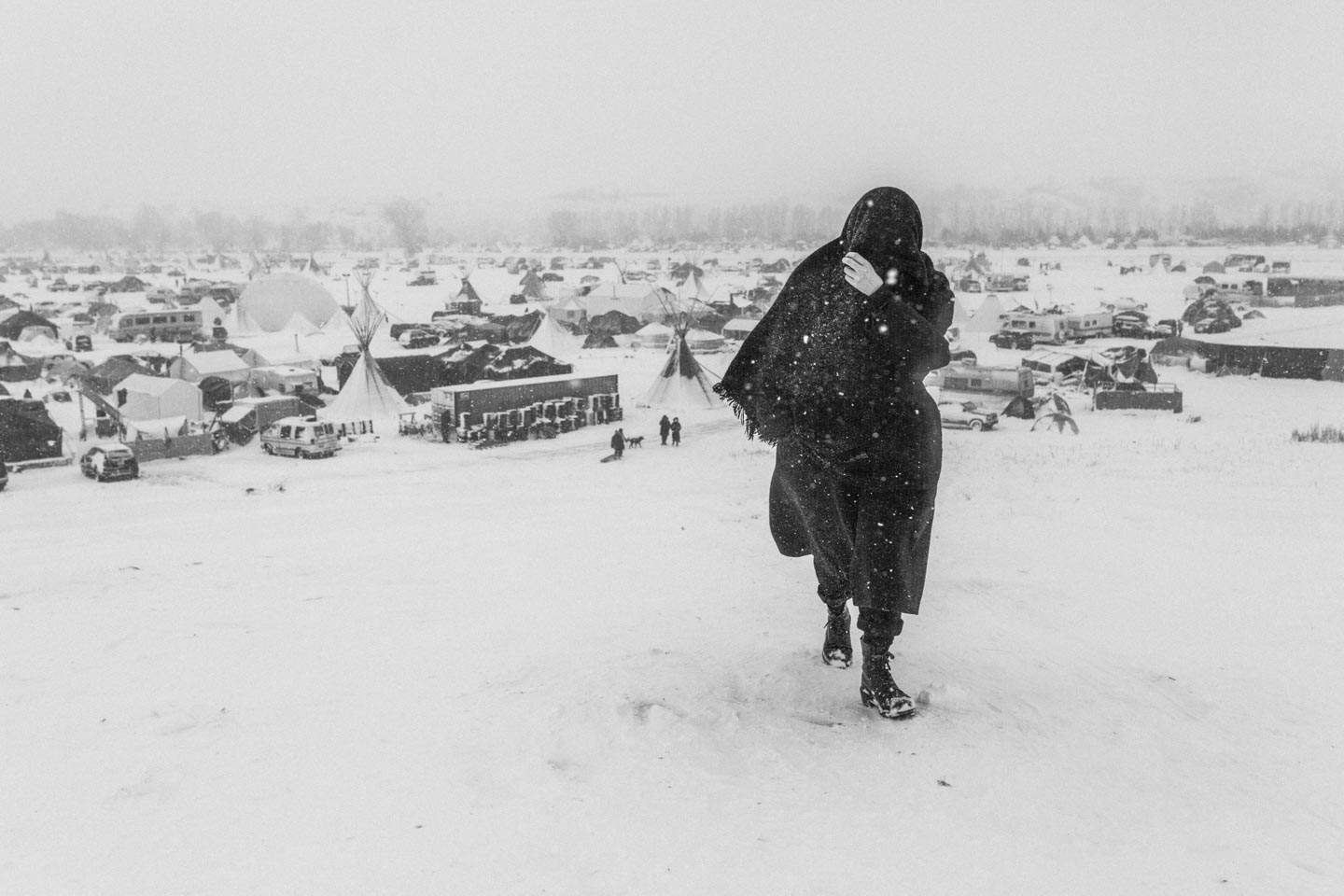 A woman walks in the snow during a blizzard during the Dakota Access Pipeline protests on the Standing Rock Native American reservation, Cannon Ball, North Dakota, November, 2016. (Josué Rivas)

Usually, my work focuses on stories about Indigenous peoples. The seven months I documented the Standing Rock movement created the foundation for how I now approach any story: Intention is crucial. At Standing Rock, we had hundreds of photographers at some points, most of them parachuting in for a weekend and then heading out. The images they made were superficial, relying on stereotypes and clichés and staying on the surface of the movement. That experience cemented my belief that your intention as a photographer matters to the quality of the images you make: the amount of work you do to educate yourself on the issue you’re documenting, the time you spend making connections with the people you’re photographing, always shows itself in the images. And if you believe, as I do, that photographs don’t simply document our world but can also help bring new possibilities into being, that work is worth it. 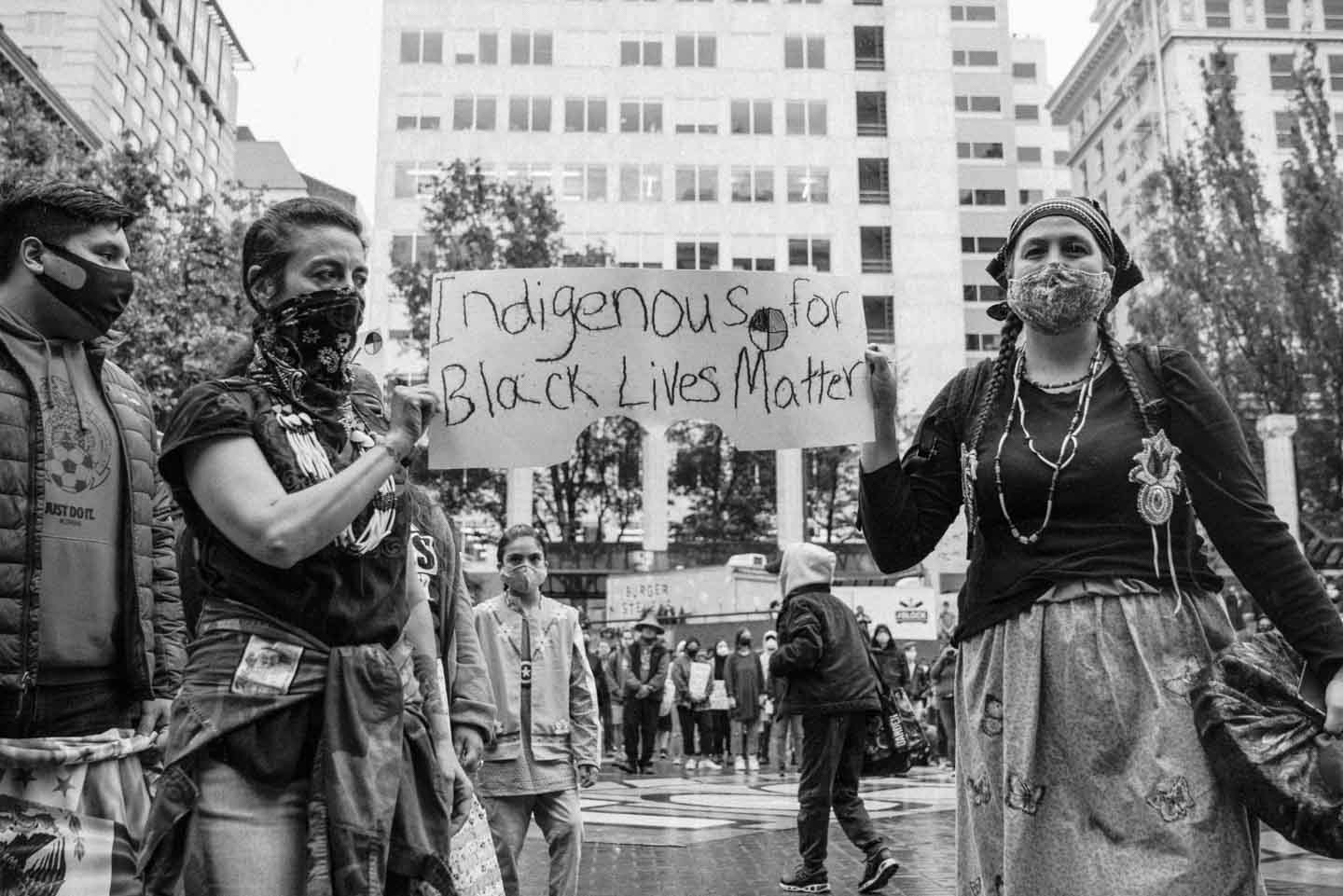 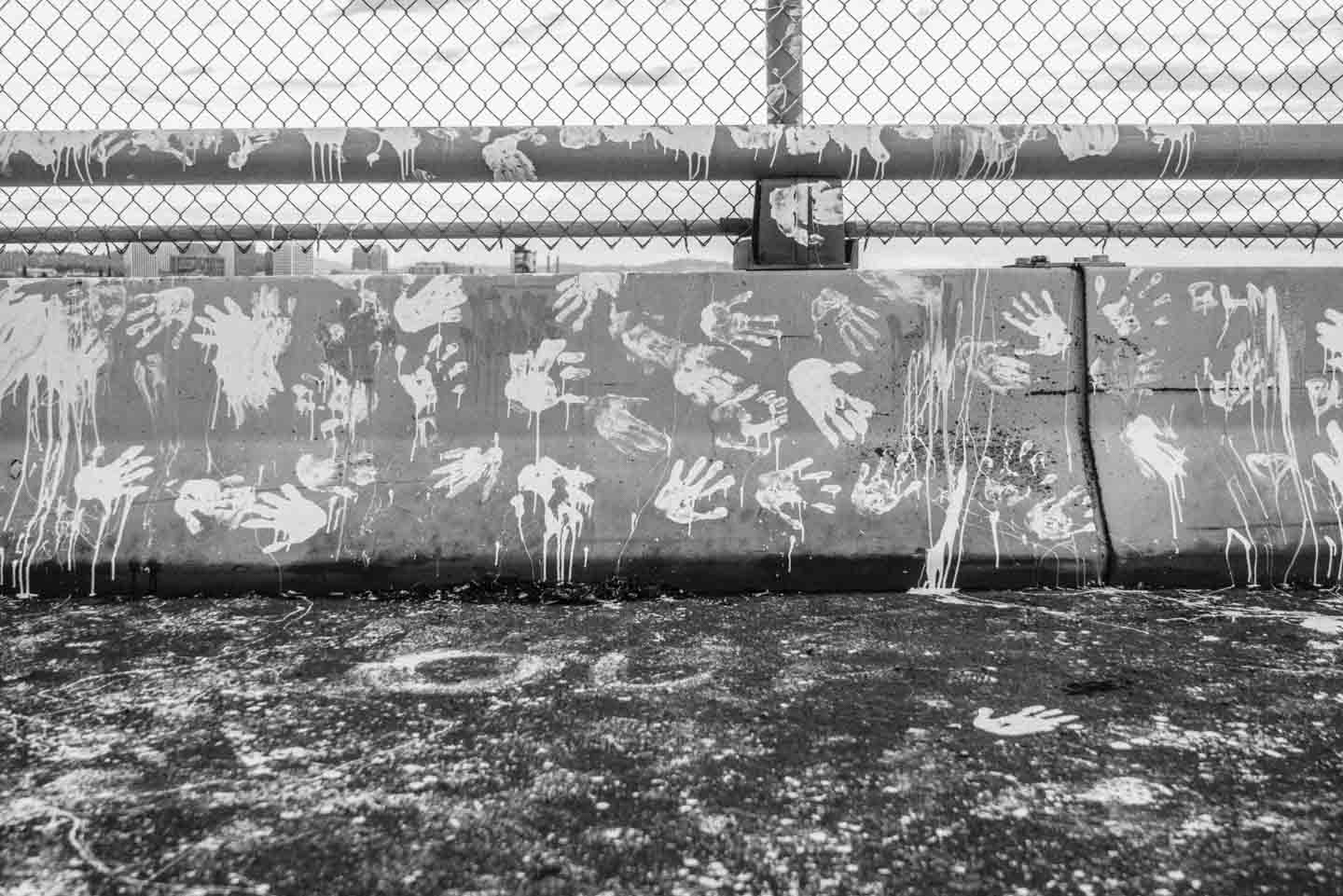 Images have power, but that power can be for good or for bad. I know the pain racist, stereotypical mascots cause for me, I know the shameful example those set for my son. So while I can’t fathom the particular pain that my Black relatives feel when, year after year, videos of Black people being murdered by police are repeated ad nauseam and lead to only piecemeal reforms, I know that if we’re going to create the change we need for all of our liberation, we’ll need images that serve the movement. 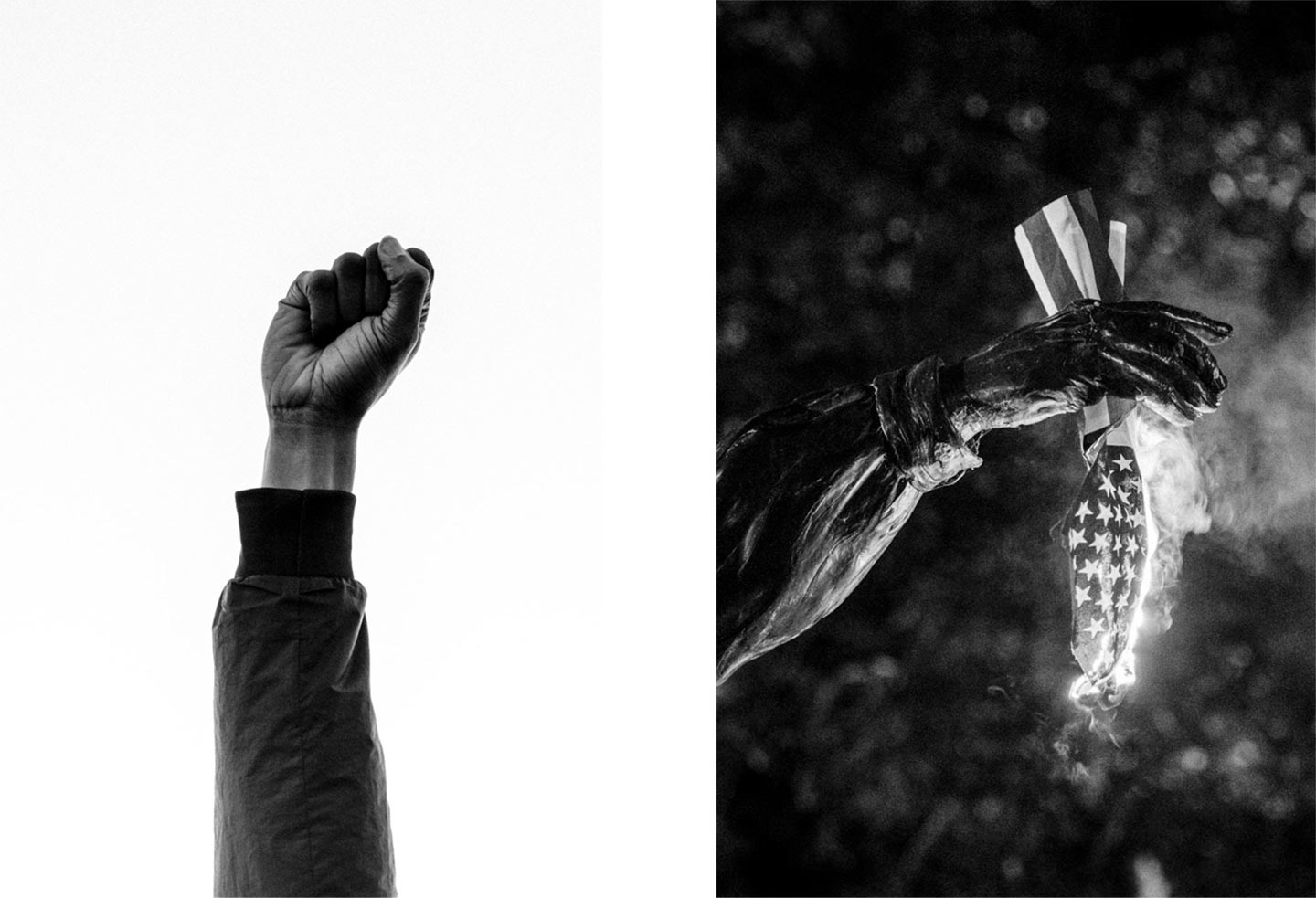 Left: A raised fist at a Black Lives Matter demonstration, June 2. Right: A United States Flag hangs and burns on the “Promised Land” statue in Chapman Square, Portland. The statue was commissioned by the Oregon Trail Coordinating Council to commemorate the 150th anniversary of the Oregon Trail in 1993. The Promised Land depicts a “pioneer” family—father, mother, and son—at the end of their journey. The plaza in front of the statue is sandblasted with footprints reminiscent of pre-settlement days: jackrabbit, black bear, porcupine, grouse, coyote, elk, and moccasin prints. The father was holding the burning flag. June 3. (Josué Rivas)

When I began to document the demonstrations in Portland, I saw similarities between Black and Indigenous movements. I’m a guest in their movement. It’s not my story to tell; it’s my story to contribute to as best I can. In the first few days, I made sure to share copies of the photos with Black relatives in the demonstrations. I wasn’t on assignment; I wasn’t making the work for a publication or a brand; I was there to make images for the people. After a few days, some of the folks I had taken photos of agreed to let me enlarge several of the images to paste them in downtown Portland. I asked people on my Instagram stories if they knew of any large walls to paste on, and the response was overwhelming: I found multiple spaces to put up the photos. This is my way of showing solidarity with Black lives and bringing these images and the people in them beyond our screens and into our daily lives. 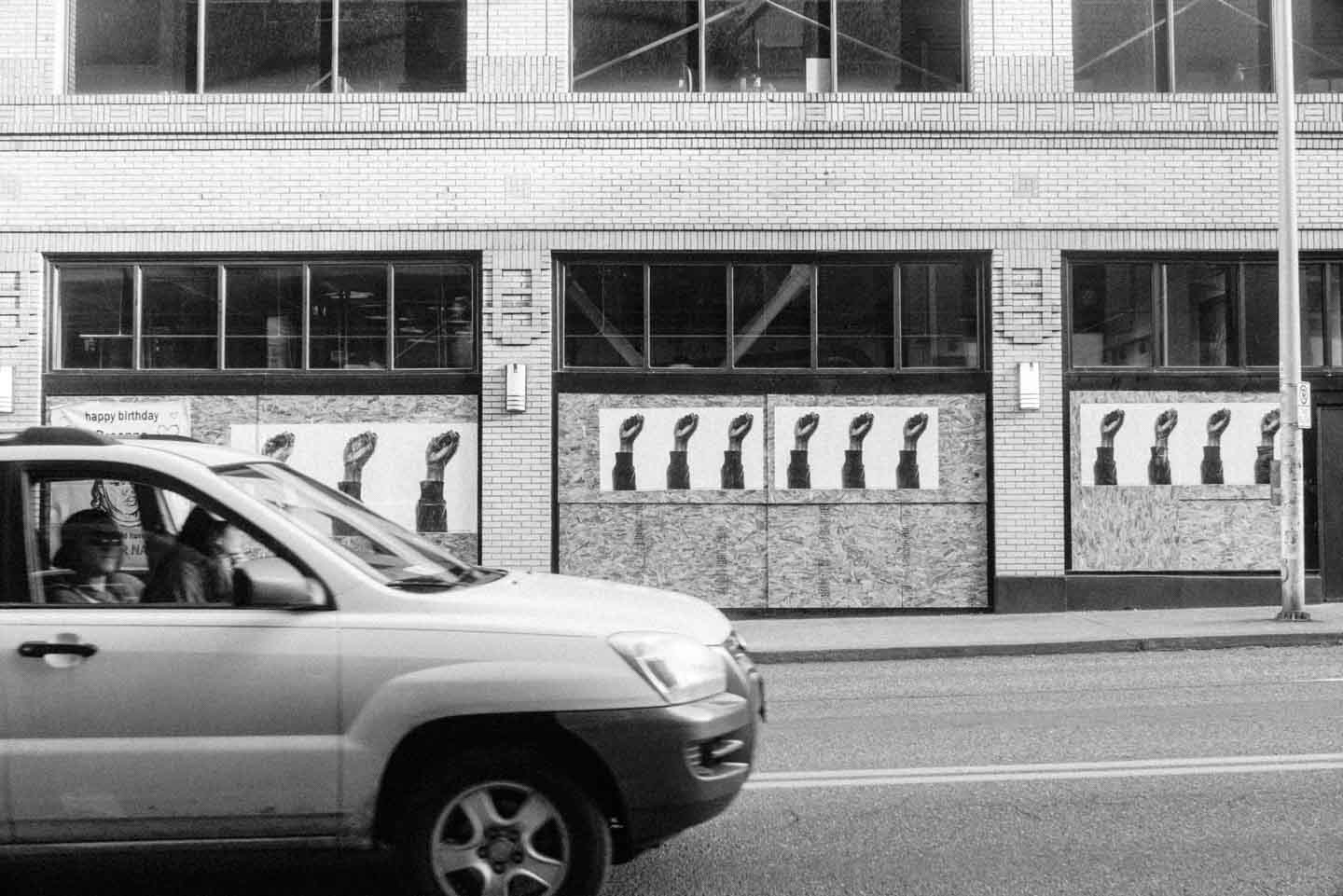 The way this movement is represented will have a big impact on whether it succeeds. We need to take care with our image making; we need to build trust; we need to get consent whenever possible; we need to understand the goals the movement is fighting for. Ultimately, our sovereignty as Indigenous peoples is interwoven with Black liberation. When their image is honored, we are all honored. 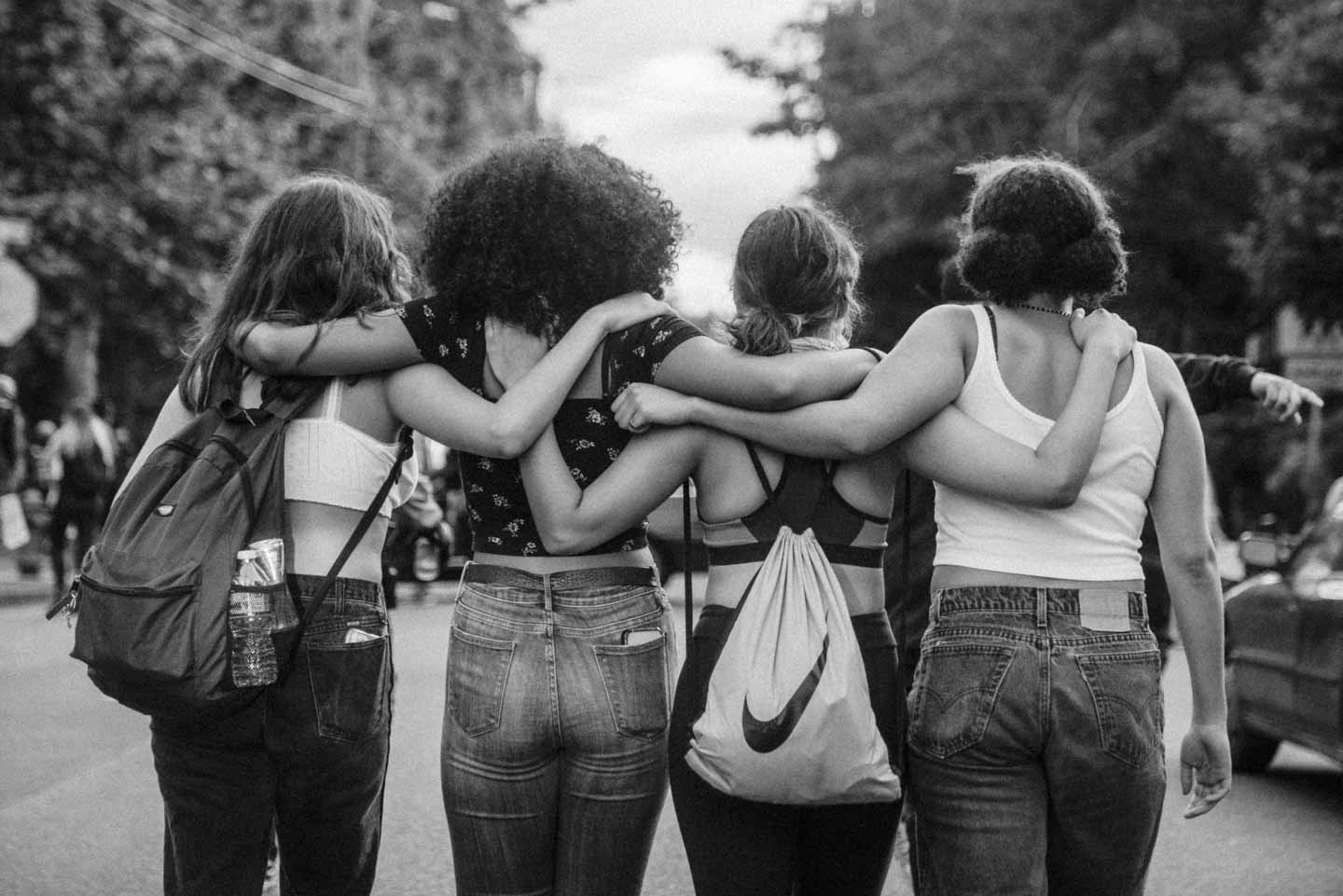