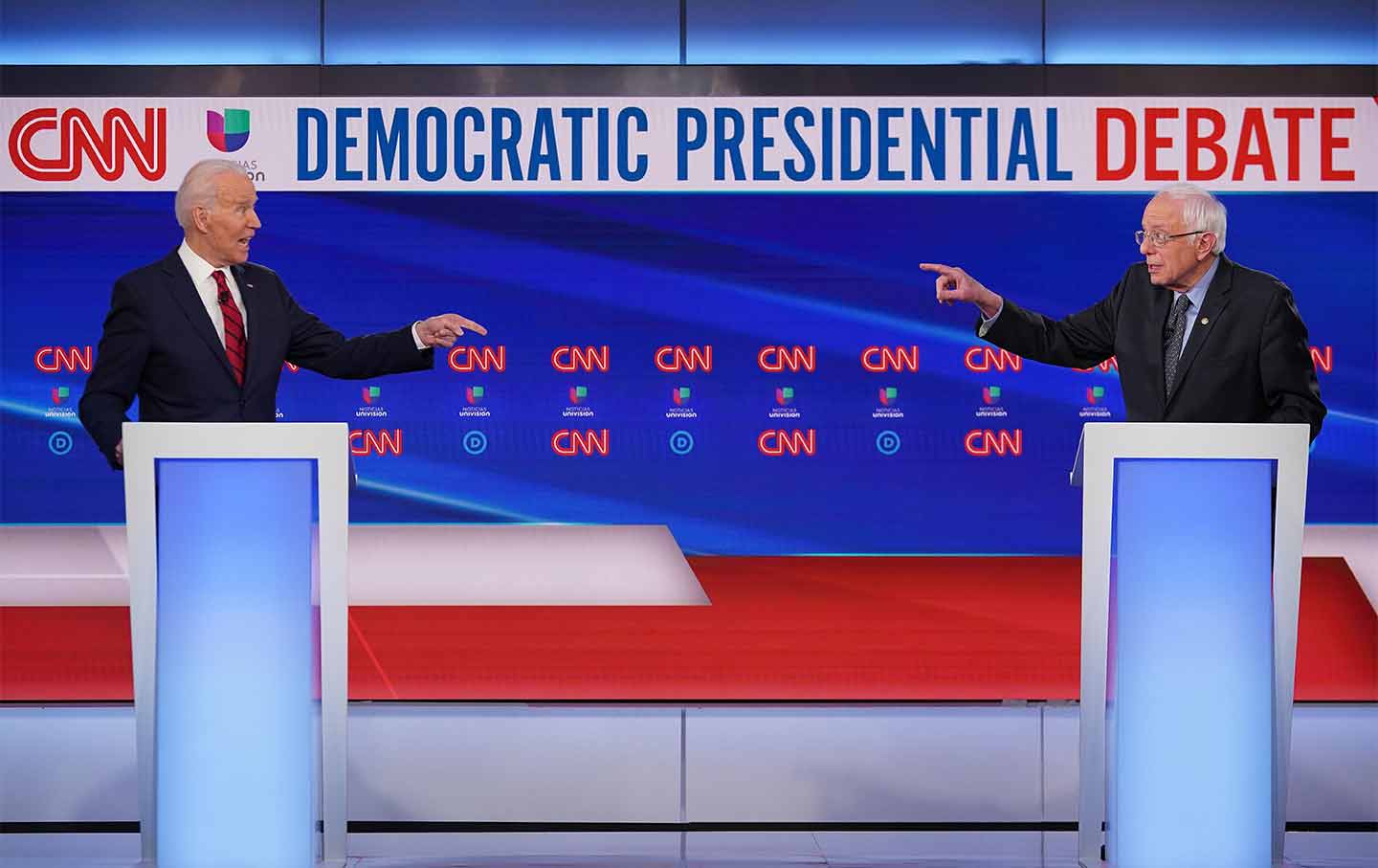 Lagging in the delegate race in the Democratic primaries, Bernie Sanders needed a knock-out triumph over Joe Biden in Sunday night’s debate. The Vermont senator didn’t achieve that, although he did a deft job of laying out Biden’s dubious record: Iraq War vote, Hyde Amendment, longtime opposition to marriage equality.

The debate did serve a singular function in clarifying the core differences between Sanders and Biden on political philosophy. Sanders is running as a politician of principle, Biden as a transactional politician who can deliver concrete results.

Biden’s argument is that America is confronted with a specific series of emergencies (Trump, the coronavirus pandemic) that he, as an experienced leader, can tackle. Sanders sees these emergencies as byproducts of a wider systemic failure. To Sanders, it’s not enough to defeat Trump and come up with a plan to deal with the coronavirus; you have to have policies that deal with the underlying social structures that allowed Trump to win the election and that have helped spread the pandemic.

As Toronto Star reporter Edward Keenan noted, “Sanders conceded nothing, fighting for progressive platform and principles, but with a minimum of anything nasty. Calm, in control of the facts, uncompromising, and pitching uncompromising as a virtue where Biden talked sometimes of the compromises he’d made to get things done.”

Matthew Yglesias of Vox made a similar point: “Biden believes America is experiencing a crisis—a pandemic, but more broadly Donald Trump’s presidency—that requires a new and different leader. Sanders believes that the basic longstanding structure of America’s politics and economic system is a crisis.”

In pursuing his pitch as a transactional leader, Biden offered up a laundry list of promises, some of which were co-opted from progressive rivals like Elizabeth Warren (reforming bankruptcy law) and Sanders himself (making college more accessible).

Biden’s argument for a reformist path came through strongly when he said,

People are looking for results, not a revolution. They want to deal with the results they need right now. And we can do that by making sure that we make everybody whole who has been so badly hurt. In terms of their—they lose the job, in terms of not having the ability to care for their children, in terms of the health care costs that they have relating to the crisis, we can make them whole now, now, and put in process a system whereby they all are made whole.

That has nothing to do with the legitimate concern about income inequality in America. That’s real. That’s real. But that does not affect the need for us to act swiftly and very thoroughly and in concert with all of the forces that we need to bring to bear to deal with the crisis now so no one is thrown out of their home. No one loses their mortgage. No one is kicked out of their house. No one loses their paycheck. No one is in a position where they have a significant financial disability as a consequence of this SARS—of this particular crisis.

Sanders responded to this by saying,

Well, I think it goes without saying that as a nation we have to respond as forcefully as we can to the current crisis. But it is not good enough not to be understanding how we got here and where we want to go into the future. So how does it happen that today in the wealthiest country in the history of the world, half of our people are scared to death?

Good, I agree. In fact, that was my idea originally to make sure that every person in this country is made whole as a result of this crisis. But, God willing, this crisis is going to end. And we’re going to have to develop an economy in which half of our people are not living paycheck to paycheck and struggling to put food on the table.

Democratic voters now have an unusually clear choice between a reformist approach and a radical one. One might think that the severity of the crisis (manifested by Trump and by the coronavirus) mitigates against Biden’s arguments for piecemeal reform. But, in fact, the very scariness of the times might lead voters to seek comfort in a politician who is offering a tried-and-true formula. It’s harder to take risks in a time of fear. That’s the biggest hurdle Sanders faces as he argues for a political revolution.