Before Los Angeles demolished it, the dam’s surviving center section stood as an eerie obelisk in the middle of San Francisquito Canyon. (Wikimedia Commons)

Seven miles up San Francisquito Canyon in far northern Los Angeles County, at an unmarked spot on an abandoned county road, there’s a pile of rubble. Obscured by the cottonwoods and willows that cluster along trickling San Francisquito Creek, the site is indistinguishable from the surrounding shale and sandstone until you’re standing nearly on top of it. Further west, ragged concrete blocks the size of shipping containers lie scattered across the canyon floor. These are the remnants of greater Los Angeles’s deadliest day, obscured from public view by time, neglect, and painstaking effort.

Just before midnight on March 12, 1928, the Los Angeles Department of Water and Power’s St. Francis Dam collapsed, inundating the canyon below with some 12 billion gallons of water. The floodwaters, which in the darkness registered first as a mounting roar to those who were awake, tossed 10,000-ton fragments of the dam thousands of feet downstream and scoured the canyon walls to bare rock. More than 400 people in the flood’s 53-mile path to the sea were drowned or battered to death as the torrent sheared through orchards, pulverized buildings, and crumpled bridges. At daybreak on March 13, the Los Angeles Times reported that one leafy canyon neighborhood had become “as barren as the most arid desert floor.”

Over 90 years later, the dedicated advocacy of a group of scholars, descendants of victims, and local activists has created the St. Francis Dam Disaster National Monument. The site’s federal land manager, the US Forest Service, is laying plans for a visitor center and trails, and has launched a public competition to design the site’s memorial. The competition offers a vital chance to reflect on both regional and national histories of unnatural disaster, impermanent landscapes, and chronic effacement of the past.

The new memorial’s stated purpose will be “to recognize and honor those who perished during the failure of the Saint Francis Dam.” Truly memorializing the disaster’s victims, though, will mean reflecting not only on the flood itself and its immediate context but also on the century of silence to which the dead have also been victim.

Those decades of neglect began to take shape in the immediate aftermath of the dam’s collapse, as Los Angeles Mayor George Cryer and California Governor C.C. Young fretted that the failure of one dam would imperil the construction of others. Most urgently, they feared that congressional approval of Hoover Dam, a far more massive water-and-power project conceived of and driven to the brink of passage by Southern Californians, hung in the balance. William Mulholland’s involvement further heightened their sense of vulnerability: The legendary czar of Los Angeles’s water infrastructure was both Hoover Dam’s most famous proponent and the designer of St. Francis Dam.

To head off that political crisis, California tightened its oversight of dam construction, and the City of Los Angeles rapidly accepted both responsibility and liability for the disaster, putting city crews to work rebuilding roads, bridges, and telephone lines in Ventura and northern Los Angeles counties. Within months, the city had begun paying reparations to victims’ families—relatively rare both then and now. Less charitably, though, the city played legal hardball against uncooperative victims, and used its work crews not just to rebuild the Santa Clara Valley but also to erase traces of the flood. A year after the collapse, Los Angeles dynamited and buried the dam’s surviving center section, which had stood as an eerie and increasingly iconic obelisk in the middle of the canyon.

Though St. Francis briefly became a talking point for congressional opponents of the Boulder Canyon Project Act, Los Angeles’s campaign for forgetfulness won the day. Boulder Dam became the symbol of a new era of monumental public works, land reclamation, and Southwestern urbanization—and the country forgot the dam disaster fast enough to avoid learning any enduring lessons from it. 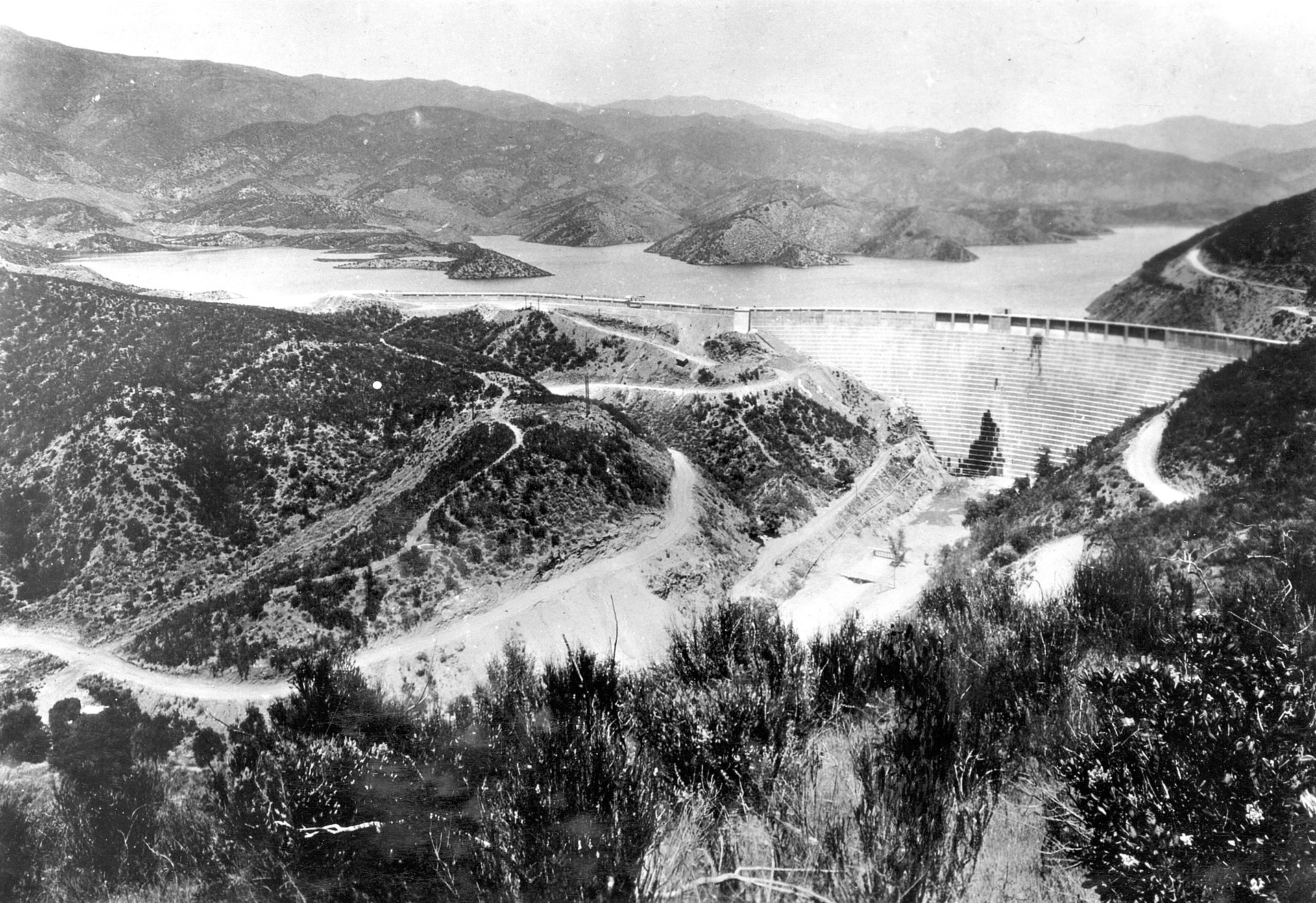 The St. Francis Dam before its catastrophic collapse. (Wikimedia Commons)

Precisely what happened late on March 12 was not immediately clear, neither to those in the flood’s path nor to the rescuers, engineers, and geologists who descended on the scene. It took months, and a bewildering array of juries and expert committees, to officially rule out rumors of dynamite and earthquakes, settling instead on “defective foundations”—a conclusion that historians and engineers continue to contest to this day.

When William Mulholland designed St. Francis Dam, he took for granted the stability of San Francisquito Canyon’s geology, omitting a variety of common safety features. Then as now, fact-finders struggled to distinguish Mulholland’s undeniable hubris from the canyon’s treacherous terrain and the state of geological knowledge. At the heart of the debate was avoidability: Was the St. Francis Dam’s collapse inevitable, a sad consequence of the societal risks inherent in dam construction, or was it the product of negligence, and therefore unjustifiable?

Today, climate change is blurring those boundaries of inevitability, both intensifying many natural disasters and making them less straightforwardly natural. Every hot day, dry spell, and intense downpour that San Francisquito Canyon endures is now overlain with a layer of human agency. The brutal wildfires of recent years have demonstrated just how inadequate our old categories of natural disaster, accident, and deliberate destruction are, as legislators, regulators, and utility executives have mostly failed to assign responsibility and design more resilient systems. The tangled aftermath of St. Francis—and the way it quickly faded from political conversations—reminds us that individual judgment, systemic action, and societal ignorance have always been hard to disentangle.

At the same time, climate change shifts the baseline against which our built world is designed, overwhelming infrastructures constructed for a static, predictable landscape. As Mulholland’s catastrophic assumptions at San Francisquito Creek suggest, though, that still-life landscape never existed in Southern California, which has been prone to droughts, floods, landslides, earthquakes, and wildfires since long before the region’s boosters began building its enduring image as an idyllic Land of Sunshine. Throughout the country, engineers, elected officials, and the rest of us are all beginning to feel baselines shifting under our feet; everywhere, those changes reveal unstable pasts and far-reaching human interventions as well.

The ongoing coronavirus pandemic, which on January 4, 2021, displaced the St. Francis Dam collapse as cause of California’s second-deadliest day, has similarly confounded our preconceived separation between natural and unnatural disaster. Like St. Francis, Covid-19’s quasi-natural status has provided fertile ground for politically convenient conspiracy theories, while evading easy categorization by those preoccupied by debating responsibility.

In the months after the disaster, the St. Francis Dam site became a tourist destination, drawing carloads of morbidly curious Angelenos into the still-devastated foothills. It was the death of one such daytripper, 18-year-old Leroy Parker, who fell to his death after clambering up the dam’s monolithic center section, that gave Los Angeles the justification it needed to dynamite and bury the disaster’s final remnants.

The creation of a National Monument in San Francisquito Canyon will transform the dam site from a forgotten stretch of roadway into a regional destination once more. How the Forest Service and its partners design the memorial will help to determine whether it becomes just another stop on public-lands road trips, or whether the new monument challenges its visitors to reflect on impermanent landscapes, the fractious, contested meaning of the region’s past, and the very real costs of collective amnesia.