This story was produced in collaboration with FoodPrint.

Today, California produces more than 80 percent of all wine made in the United States. Its $43.6 billion industry makes the state the fourth-largest wine producer in the world. The beverage is quintessential to the state’s self-image as Europe’s carefree kid-sister in the industry, and of America’s place in the international wine market.

And yet, as land in the state becomes dryer and fires burn hotter, activists across the country are challenging California’s glittering self-conception. Despite its status as a luxury good, they argue, wine is an agricultural product. It is not exempt from the conversations about food justice, soil health, and climate change that have permeated other agricultural sectors. “All of the impact that we have lies in the step before putting it into the bottle,” says community organizer and wine educator Jahdé Marley. 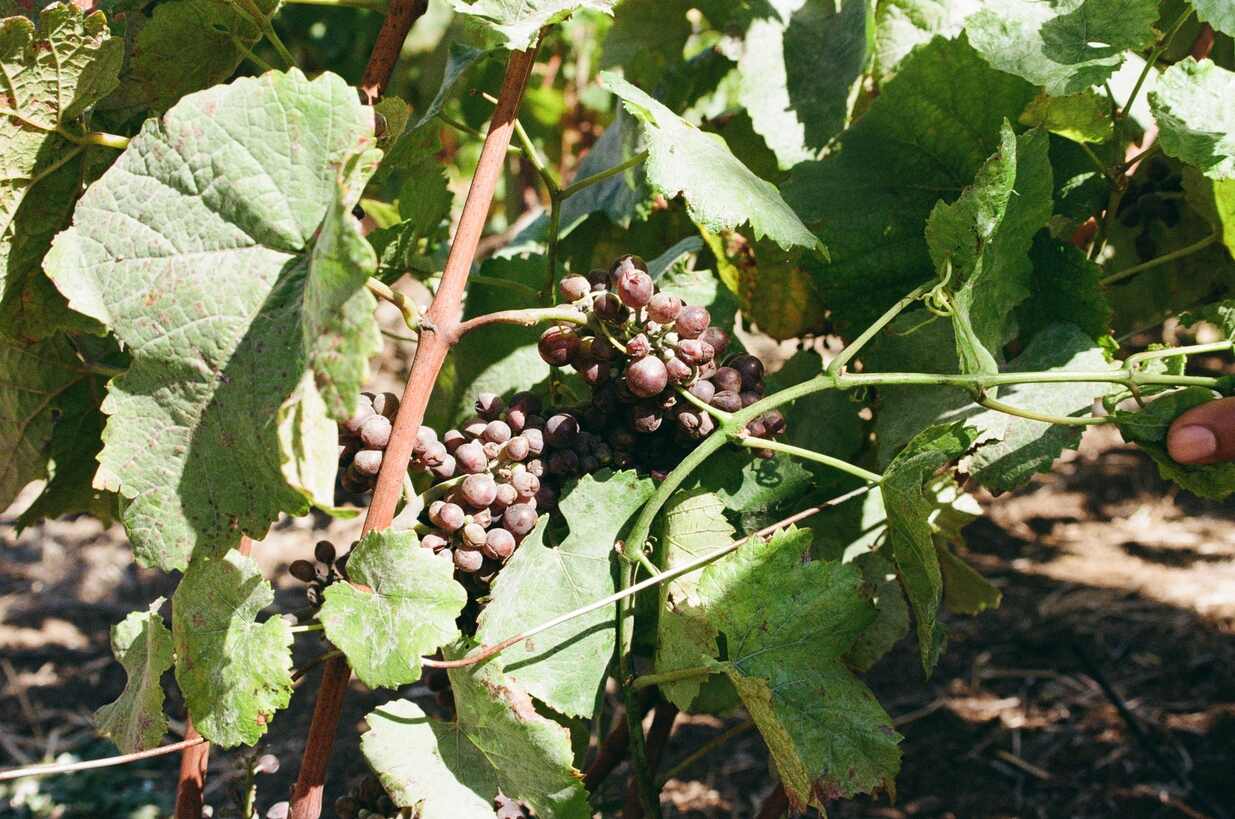 Agriculture accounts for more than 70 percent of all water usage in the state, the vast majority of which is held by billionaire mega-farmers with a choke hold on California’s “bewilderingly complex” water rights laws. In Napa and Sonoma—the heart of California’s wine industry—investors from South Korea, Australia, and Arkansas have recently paid $250 million, $315 million, and $180 million for vineyards, respectively. Even California Governor Gavin Newsom’s company, PlumpJack, recently purchased a $14.5 million vineyard in Napa. (Newsom launched his career by opening a winery in Napa with Gordon Getty, son of oil billionaire J. Paul Getty).

However, the seizure of land by the ultra-powerful to make wine in the state is nothing new. California’s winemaking industry began in the 18th century when a vast wave of Spanish priests arrived and constructed Catholic missions—Santa Cruz, San Jose, Santa Barbara—across the state’s spine. There, Franciscan priests grew rows of imported Pais grapes for sacrament, forcing hundreds of Indigenous tribes from their ancestral lands in the process.

Given this history of colonization, wealth inequality, and the ongoing climate crisis, activists say that change in the industry is both imminent and necessary. In California and beyond, a new generation of winemaker-activists are using hybrid and indigenous grapes to create transformational change. Their goal—which Marley has formalized through a festival called Anything But Vinifera, or ABV—is to use “wine and ferments as a vehicle to enact land justice and social justice—all of which ties back to agriculture.” 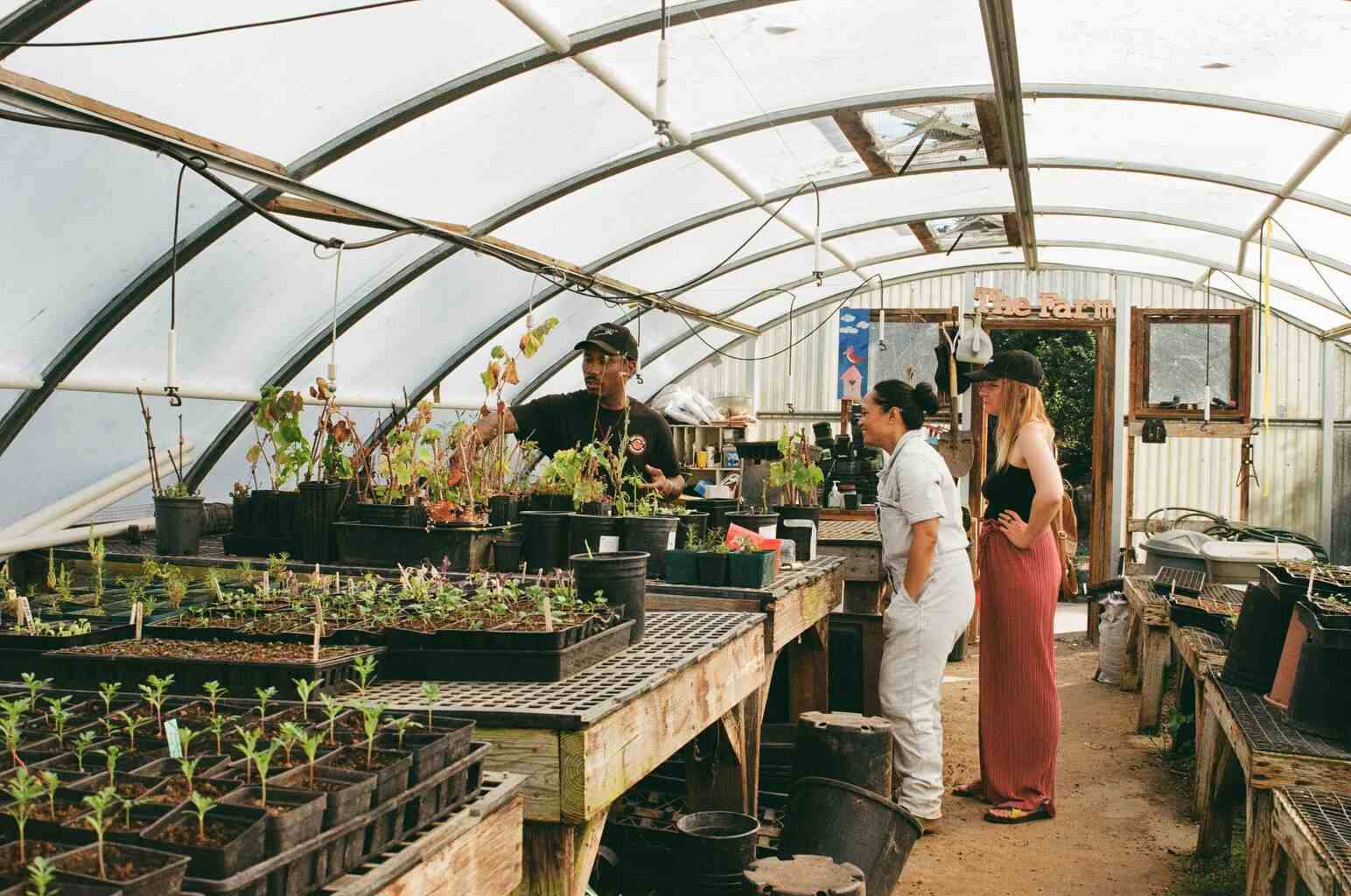 The 280 Project, located at Alemany Farm in San Francisco, is an important node of the ABV community. The farm is nestled between the Alemany Apartments—150 units of much-needed affordable housing in a city with some of the highest rents in the country—and the Interstate 280. Among a sea of grapes, the car horns are a disorienting reminder of the challenges of growing food in a system designed for semitrucks instead of land stewards. For Christopher Renfro and Jannea Tschirch, though, the interstate is a source of inspiration.

Renfro and Tschirch started the 280 project in 2019. Renfro heard that rows of vines at Alemany had been abandoned. For Renfro, a trained horticulturist and wine professional who had been looking for land, it felt like fate. At first, the duo only wanted to experiment. Could they make a great bottle of wine in their apartment? Almost immediately, though, it became clear that their calling was bigger. 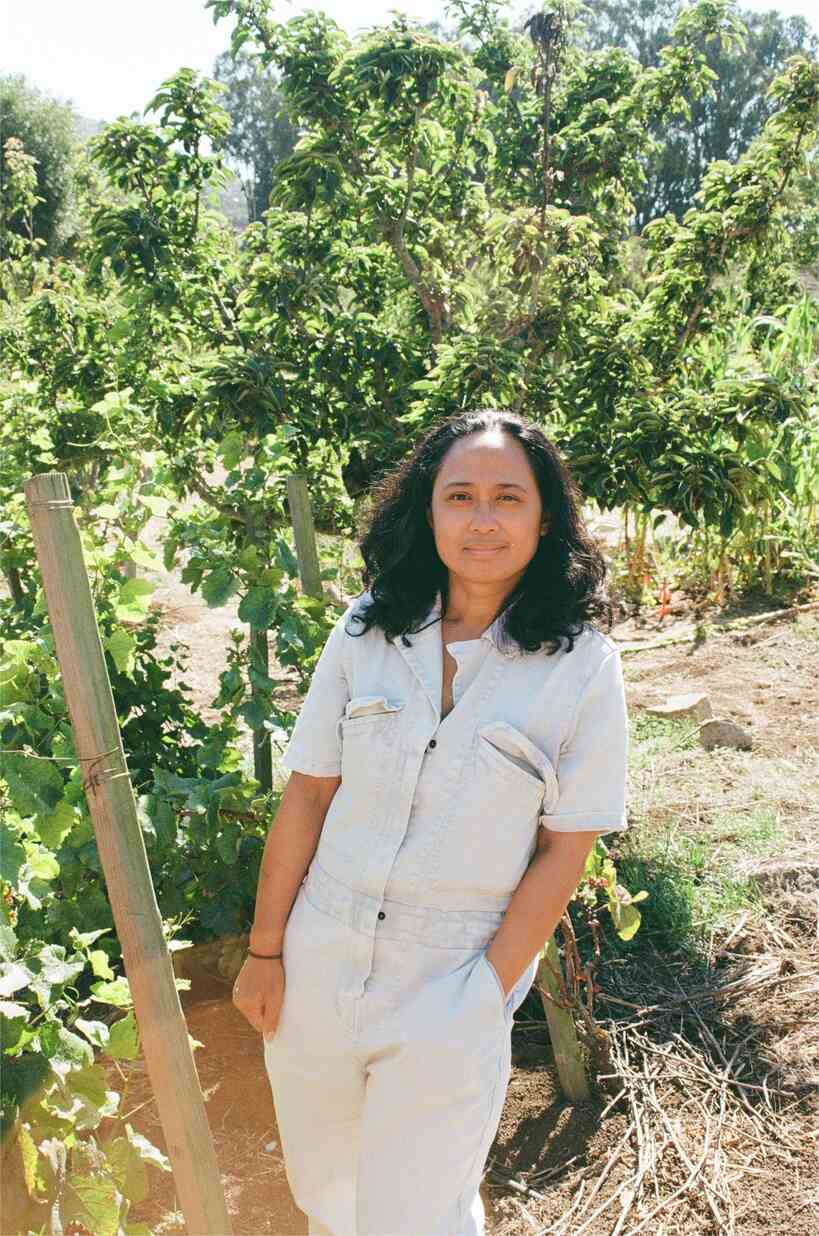 They heard stories about the previous winemaker harassing Black residents who entered the farm, despite Alemany’s public status. Renfro, who is Black, and Tschirch, who is white, wanted to create a radically different space. In addition to winemaking grapes, they started to plant grapes for snacking. Neighbors came and ate them fresh from the vine. After several similar, small gestures, a vision emerged. The 280 Project could train people who had long been excluded from the industry—Black, Indigenous, trans, and queer—to make wine, feed their community, and build sustainable livelihoods in the process.

In 2020, in collaboration with winemaker Steve Matthiasson, they were able to make their vision materialize into a full-blown apprenticeship program. Each year, a handful of students have the opportunity to learn about all aspects of winemaking, from climate-adaptive farming techniques to the benefits of hybrid grapes. When the first application opened, spots filled up in less than five minutes. 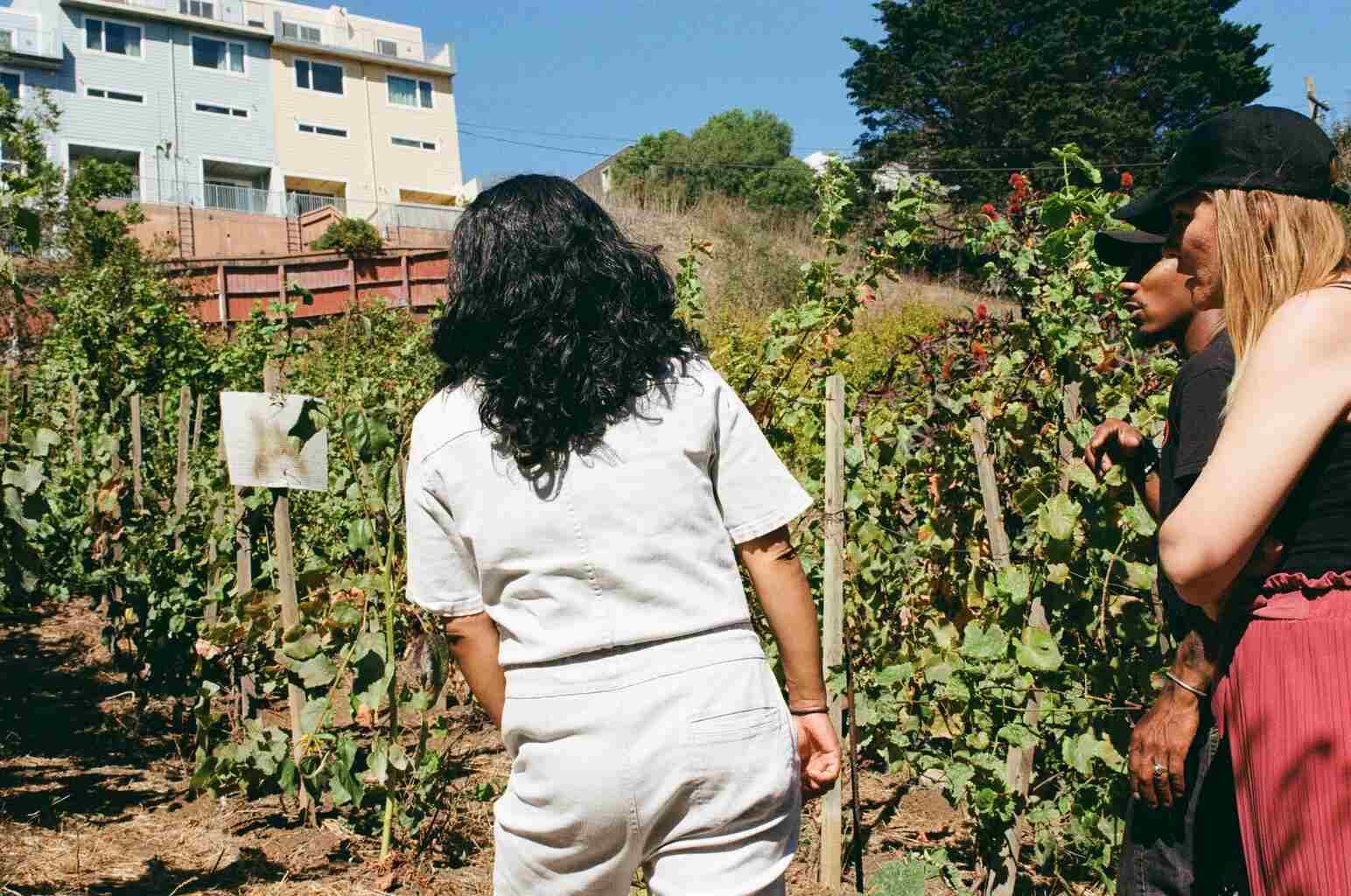 Like Renfro and Tschirch, Marley launched Anything But Vinifera after noticing severe underrepresentation of people of color in the wine industry and seeing a need to uplift the sustainable farming projects emerging around the country. Originally envisioned as a one-day symposium, Anything But Vinifera quickly transformed into a hub to enact change in the industry as a whole.

The name Anything But Vinifera refers to hybrid grapes, fruit wines, rice wines, and native grapes. “Anything but” the Vitis vinifera—Cabernet Sauvignon, Pais, and Chardonnay—found on “classic” wine lists across the country. It is an explicit refusal to continue with the status quo. 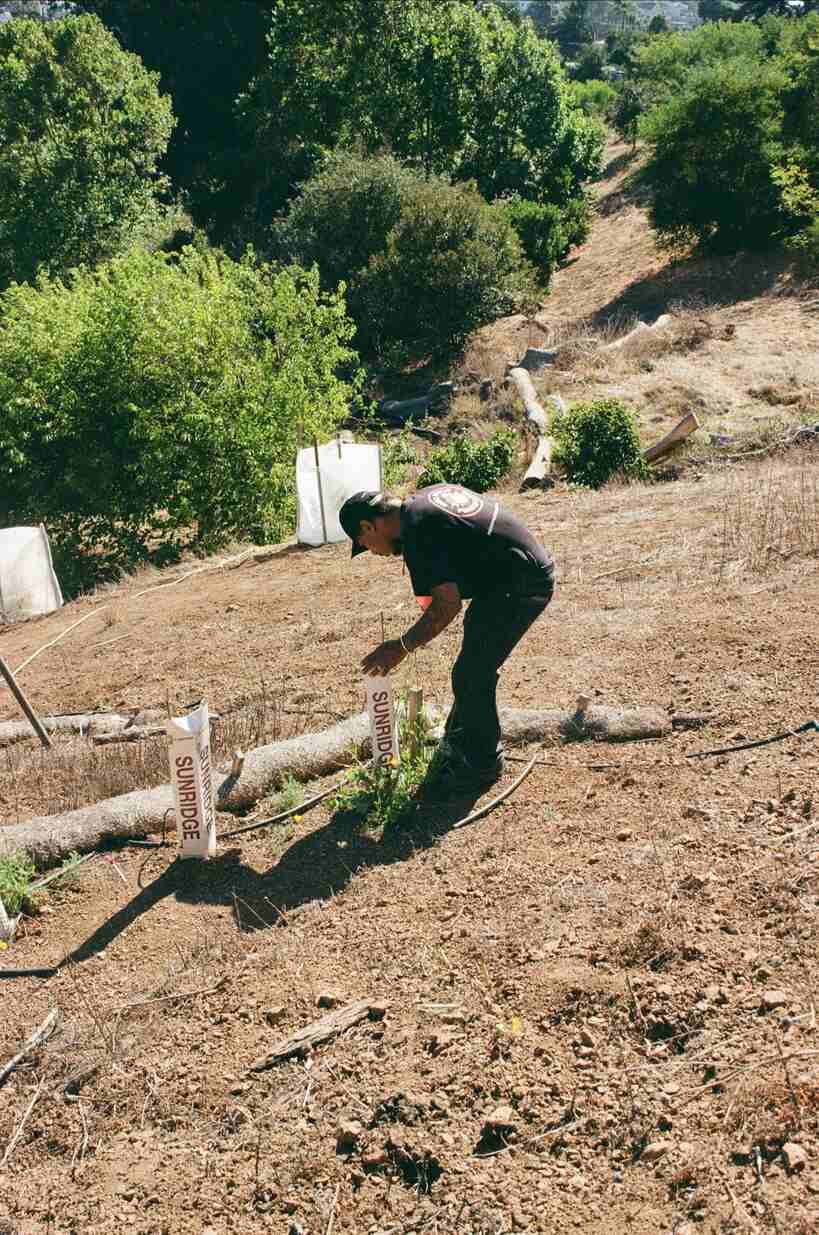 Chris Renfro of the 280 Project. (Kate Buenconsejo for The Nation)

Hybrids are the result of two, cross-bred grapes, usually Vitis vinifera and another native grape. They often require less water (or no water at all, which is a boon in drought-prone California) and can grow in more diverse climates than their Vitis vinifera counterparts. Despite their recent popularity, wines made from fruits and native grapes have existed for millennia. “The belief that only Vitis vinifera could be called wine is the result of colonialism,” which created a singular, exclusive definition of wine, says Marley. Recent evidence suggests that the first wines were made with indigenous grapes more than 9,000 years ago at Jiahu in Neolithic China.

The flexibility and resiliency of these grapes have opened the door to make wine in New England, the South, and the Midwest. This has enabled a new generation of winemakers—the vast majority of whom are women, people of color, and queer—to access land and create their own equity-centered projects.

“It became very clear that the ways our producer friends were going to be able to access their own land and have their own wine labels were very much in the fruit wine, hybrid wine, and native grapes sectors,” Marley said, adding that “the price of land outside the major regions is much lower, and the knowledge is shared in a more communal way.” Across the country, these winemakers are using hybrids to create their own form of American wine—and decolonizing the Eurocentric industry in the process. These methods are also inextricably bound to climate change, as hybrids require significantly less tilling and agricultural inputs than their Vitis vinifera counterparts. 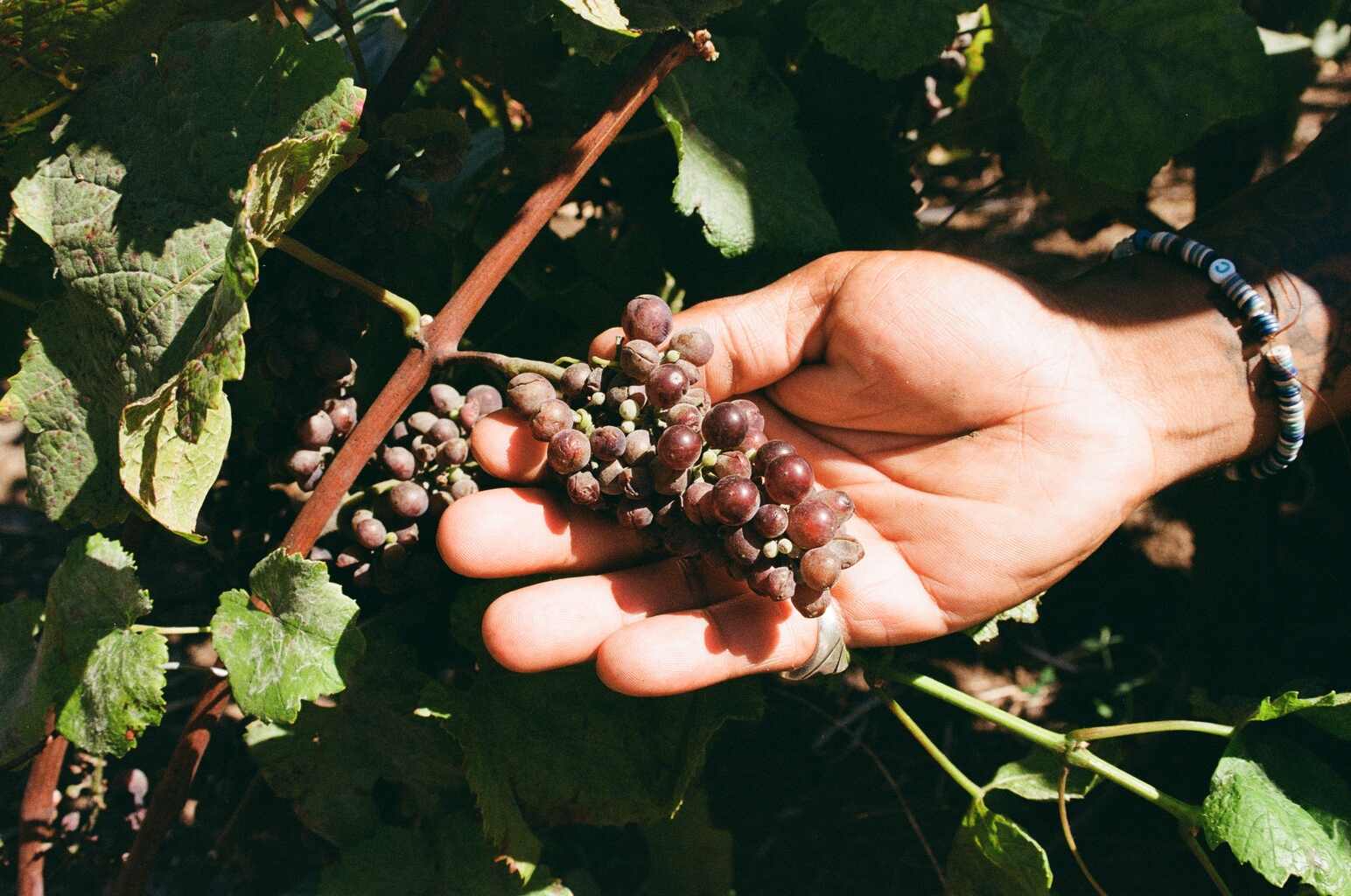 Kathline Chery, Justine Belle Lambright, and Grace Meyer founded Kalchē Wine Cooperative, in Fletcher, Vt., in 2020. All industry professionals who had been laid off, they used the time (and stimulus checks) of the early quarantine to reimagine what the beverage industry could be. Was it possible to grow wine that tasted delicious and healed the land on which they worked?

The answer was a resounding yes. Kalchē has embraced a broad understanding of wine and ferments, utilizing hybrid grapes and foraged fruit. Its ecological footprint is significantly lower than that of many of its California counterparts because it relies on existing crops for winemaking instead of planting new vines, tilling more soil, and using the vast quantities of water needed to establish a new vineyard. Its wines are also unique. A recent glass had the bright vibrancy of a perfect summer red, balanced with a delightful dose of cranberries. Kalchē’s wines are not only delicious. They are a template for transformation. 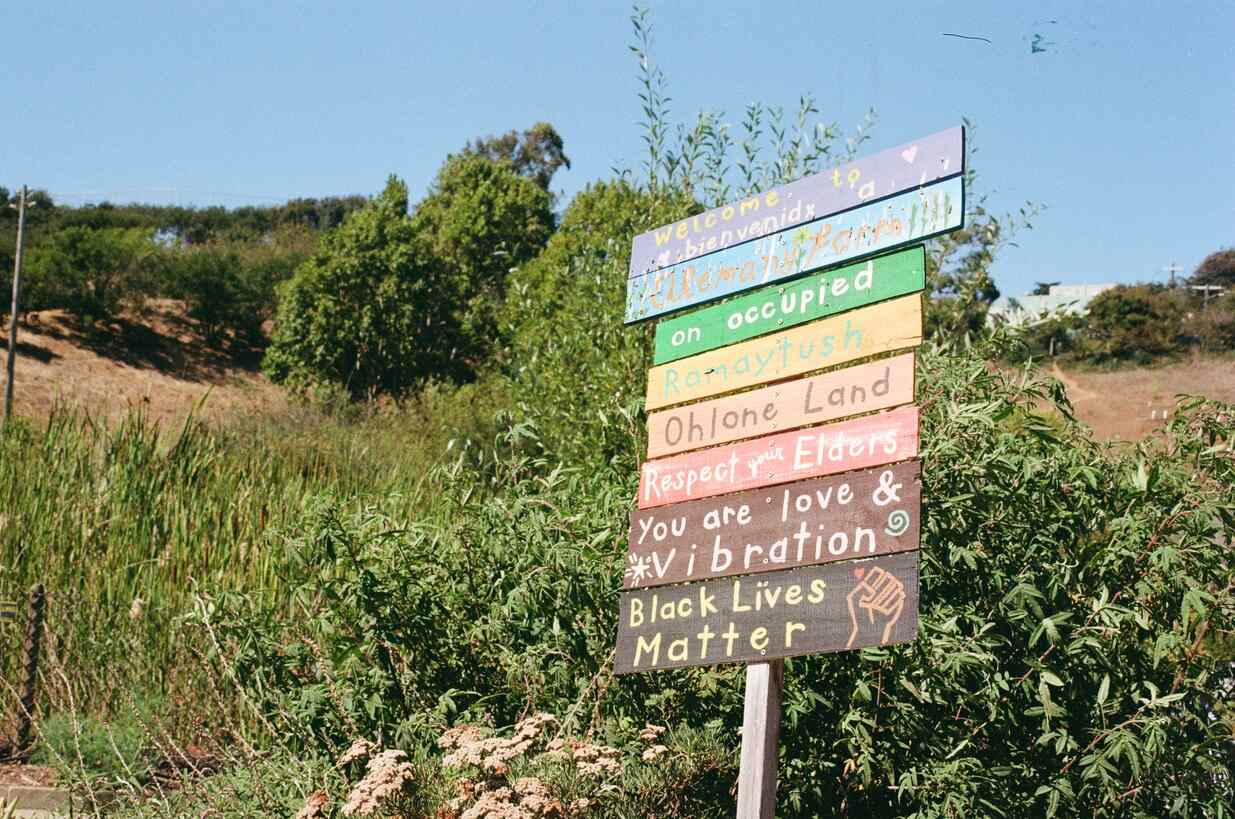 A sign at Alemany Farm in San Francisco, Calif. (Kate Buenconsejo for The Nation)

According to Lambright, Kalchē’s director of external business, Kalchē’s vision of climate justice is inextricably bound to the dismantling of “racism, sexism, and colonialism” in wine. They point out that there can’t really be a full decolonization of wine, because it’s steeped in a legacy of Indigenous land theft, enslavement, and economic exclusion. There can, however, be a reclamation of the “pancultural” origins of wine, from the botanical co-ferments of ancient times to Kalchē’s cranberry and hybrid blends today. 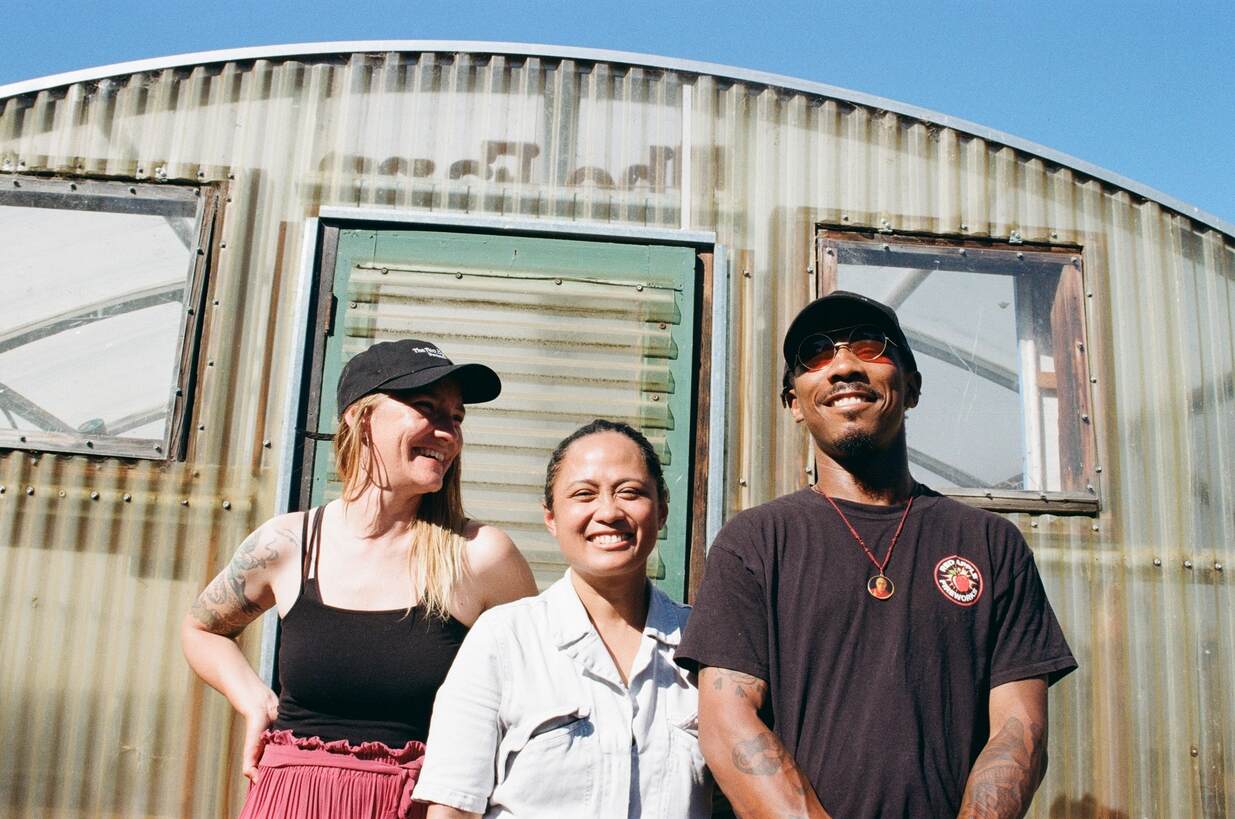 Chris Renfro, Rita Manzana, and Jannea Tschirch of the 280 Project at Alemany Farm in San Francisco, CA. (Kate Buenconsejo for The Nation)

“People are hopeful when they can touch the thing. When something seems so far away, it seems hopeless,” says Marley. Nearness—feeling your hands in the soil and viscerally understanding that a different world is possible—is necessary for change.

At the 280 Project, every glass of wine is infused with such possibilities. As the scholars Eve Tuck and K. Wayne Yang write, “Decolonization is not a metaphor.” It is a practical strategy to change the wine industry—and the world. “If billionaires can break off a piece of their agricultural properties, maybe we can build cooperative farms, community gardens—and we can keep money in that community,” says Renfro. “Billionaires like Bill Gates are buying up all of this land in California, and I want to talk. I want to see what we can do.”

As with other agricultural products, the footprint of wine includes not just what is grown but how it’s grown and by whom. As climate change disrupts our ability to do things within the status quo, these producers are demonstrating that we have an opportunity to challenge everything and create something life-giving in its place. Between an apartment complex and a freeway in California, where pockets are brimming with ripe grapes, a new reality may be taking root.