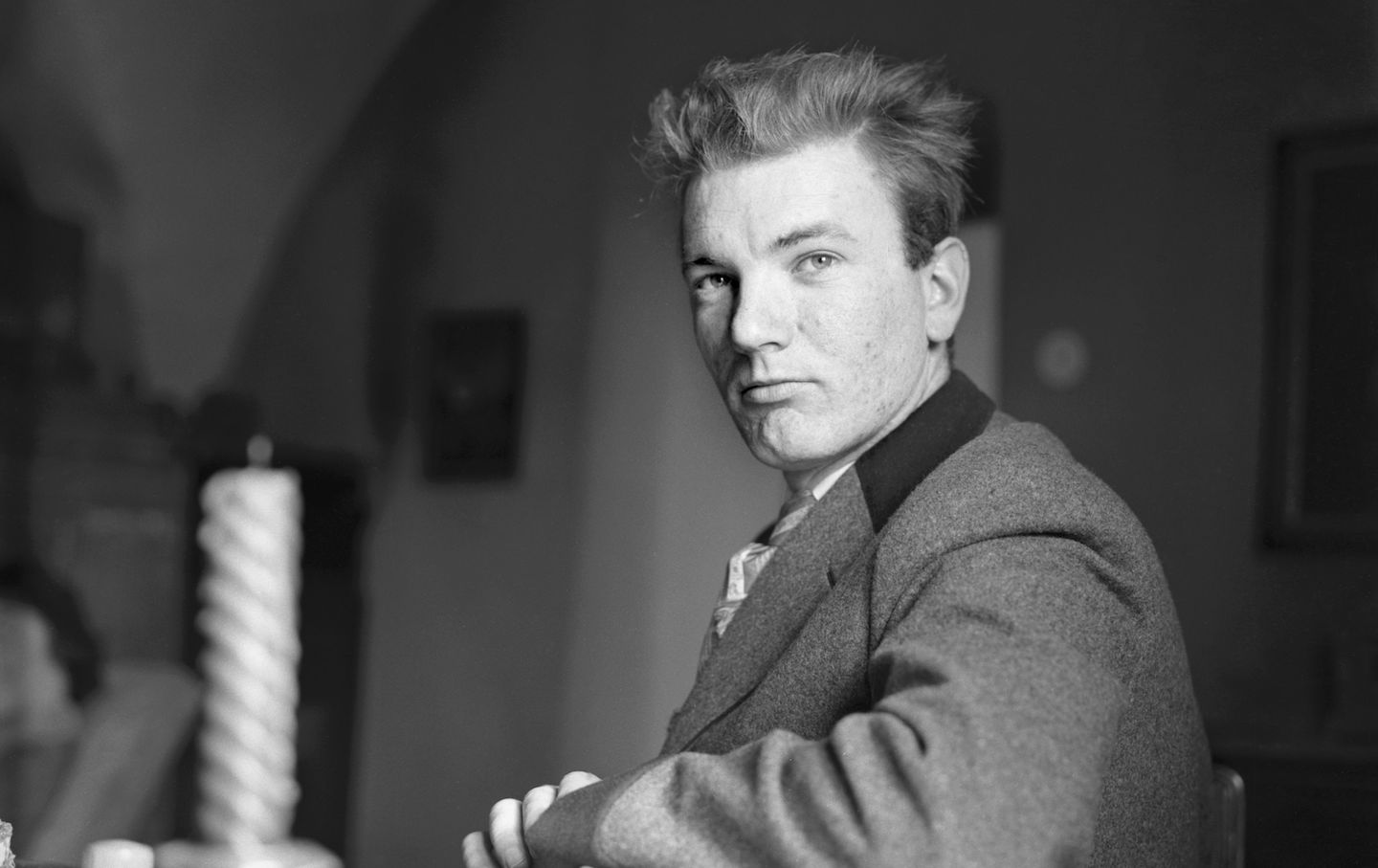 In a characteristically bleak 1986 interview with Asta Scheib only a few years before his early death, Thomas Bernhard observed, “One always depends on people. There is no one who doesn’t depend on somebody. Someone, who is always alone with himself, will go under in no time, will be dead.” The idea of a necessary but unwanted reliance on others is threaded throughout Bernhard’s novels. Constituted by an endless running away or going against, his characters are incapable of creation or independence. Often supported by inherited wealth, they devote themselves to senseless projects or burn the books they have barely started, before being drawn ineluctably back to their decaying family estates. They despise their dependency on these places and figures, yet in the end cannot help giving into it.

Positioned between the open agonies of earlier novels like Frost and Correction and the dark hilarity of later outbursts like The Loser and Woodcutters, The Cheap-Eaters is one of Bernhard’s least known works. The setup is familiar enough: An unnamed narrator recounts his relationship with a ranting obsessive named Koller, whose loss of a leg after he was bitten by a dog has given him the freedom to pursue his ideas to their “utmost limits,” since the dog’s owner, Weller, is obliged to pay him a lifelong annuity. The event slices Koller’s biography into two neat periods—before Weller’s dog and after Weller’s dog—but instead of transcendence, what we witness is an exhaustion of both thought and theme. Koller has been trying to write an “epoch-making” essay for the last 16 years, his “Physiognomy,” although, as is typical with Bernhard, we never learn much about it. As a result of both the dog bite and another decisive event—a slight but significant variation in his daily walk—Koller’s thoughts latch onto the “cheap-eaters,” a group of four men who gather together every day at the Vienna Public Kitchen and who, like him, invariably choose the cheapest option.

Bernhard’s later worlds often feel as if they’ve been emptied of people, and those left behind are silhouettes rendered on a screen of subjectivity for which the remaining reality is slick with malice: families out to obstruct one another, mothers who want to destroy their offspring, sisters inimical to their brothers’ intellectual endeavours, and, of course, the relentless idiocy of Bernhard’s own Austria, a country that he purported to hate and from which he banned any of his theatrical works from being performed posthumously. The Cheap-Eaters is no exception. For the most part, we encounter only Koller and the narrator; here even the usual family trappings have been shorn away. There’s something almost geometrical about the novel’s spare settings and absolute lines, as if the typical Bernhardian arrangement has been scaled back to only its most essential components: two men, diametrically opposed, and two spaces (the VPK, where Koller likes to eat lunch, and the God’s Eye, where the narrator likes to eat lunch), also diametrically opposed.

Unlike other of Bernhard’s books, The Cheap-Eaters admits no real thwarting: Only the rogue element of Weller’s dog introduces anything other than a mental event, and Koller’s inability to get started on his essay cannot be attributed to the malevolence of a nearby sister. This does not, in fact, make a difference. Every Bernhard novel, regardless of what it recounts, is a study in total war—not the devastating play of externals, as related by that other great Middle European miserabilist, the Hungarian Laszlo Krasznahorkai, but a war carried out in minutiae across the infinitely hostile wastes of a mind turned in on itself. Meeting Koller again after the incident with Weller’s dog, the narrator observes, “Finally everything within him and having to do with him was no longer anything but thought and intolerability.”

Little about the relationship between Koller and the narrator is revealed until around a third of the way through the book, when we learn that they attended the same school but met for the first time at a nearby pharmacy, where the narrator was picking up medication for his “chronic sore throat” and Koller for his “unremitting ophthalmia.” Reading this section in light of Bernhard’s other long-term sufferers amounts to something like comic relief. Here are his juvenile neurotics with their juvenile health problems—a sore throat and ophthalmia—though the adjectives that accompany them suggest the future to follow: a sequence of hospitals, sanatoriums, and mental institutions that sometimes even border one another.

The narrator’s qualified admiration for Koller is clear from the start. “His existence had also always been a more perilous one than mine; the abysses into which he had gazed were undoubtedly always deeper, the altitude at which he existed had always been a much loftier one and a vertiginous one most of the time, an altitude for which I had always lacked each and every basic qualification.” That the narrator feels crushed by Koller yet drawn to him comes as no surprise. At times The Cheap-Eaters reads like My Brilliant Friend, only with depressed middle-aged men. Describing Koller, the narrator tells us: “And in point of fact he had never wanted to be a different person, whereas I had very often wanted to be a different person. I had often wanted to be him, but he had never wanted to be me.”

This is affecting. Everyone has had the experience of being crushed by another person. Life is a sequence of crushings. Even the older, disabled Koller is perfectly able to put the narrator back in his place, outpacing him as they make their way to the God’s Eye, where Koller intends to tell him something of the cheap-eaters. As in many of Bernhard’s books, the lesser intellect obsessively watches the greater, and in these characteristically empty worlds, both the observer and observed depend entirely on one another—Koller admits to the narrator that he is nothing without a listener, “a victim as it were.”

Reading Bernhard after negotiating the subtler energies of much contemporary fiction is like someone throwing a window open in a small, overheated room only for a gale to rush in. His sentences are not compact, and they are not ornate. They are overloaded but never overwrought. They do not try to suggest hidden depths or hint at greater mystery. Absolutely no attempt is made to beguile the reader, and in Bernhard’s fictions there is barely ever any backstage. Instead what we see is a flat, repetitive enactment of thought and feeling that reminds me of the literary critic Erich Auerbach’s description of Homeric narrative as being almost all foreground, only Bernhard deals in epic misery.

In The Cheap-Eaters, the capability of the narrator is even more bombastically inflated—no detail escapes either him or Koller—and the two men elaborate away until the whole world begins to look like the same mindless iniquity. During one of his habitual waylayings, Koller relates to the narrator the story of how he met the cheap-eaters, and the narrator in turn relates his experience to us: “I was astonished by the acuity of recollection with which he had been capable of disclosing, or, rather, as he put it, adumbrating to me alone the particulars of his reentrance into the VPK [which] had taken place more than sixteen years earlier.” This is coy: Both men suffer from a kind of extreme omniscience—it’s not for nothing we are told that the restaurant favored by our narrator is called the God’s Eye, or that Koller has inflamed eyes—and the inability of all of Bernhard’s narrators to stop recounting.

Both the inability to stop and the agony involved in going on are key to understanding Bernhard’s work. Trawling through past readings of Bernhard, I’m surprised to see how often the obsessive tendencies of a character like Koller are translated into genius, if only because the conflation of the two is something my therapist has often warned me to avoid. Ruth Franklin writes in The New Yorker, “His typical protagonist—often loosely based on a real-life model, such as Glenn Gould or Ludwig Wittgenstein—is a genius who is obsessed with an impossible project and is eventually destroyed by the tension between the desire for perfection in his work and the knowledge that it is unattainable.” She gives the example of Roithamer from Correction, who builds his sister a gigantic Cone to live in at the exact center of the Kobernausser Forest, and Rudolf from Concrete, who is trying to write a definitive essay on Mendelssohn. But Roithamer is far from typical, Rudolf is certainly not a genius, and characters like Glenn Gould are rarely more than distant stars. In Bernhard’s books, genius is essentially apophatic; once the narrator begins to articulate its contents, it disappears. It is almost disappointing when we finally receive a description of the cheap-eaters, because of course they can never justify Koller’s extreme interest in them.

Bernhard is less interested in genius than he is in where a belief in its infinite entitlement can take us. His characters impose and coerce and define and correct. Their chiasmic sentences, with their compulsive repetitions and incessant comparisons, are far more compelling than any of the observations they actually make, which is why the reader is willing to read the same mad rant 10 times over. The narrator’s first description of Koller is full of contrasts, the this and that (or just as often the this or that) that characterizes Bernhard’s work. He tells us that Koller loved to read and he did not. Koller is a man of the mind and he is not. Koller is a cheap-eater and he is not. In this incessant circling of identity we can find Bernhard’s true method, which is not the effortless extension of genius as such but the relentless, deadly pivoting of the obsessive. If these binaries of thought are debilitating when it comes to the difficulties of decision-making—endless wavering is another omnipresent theme in Bernhard’s writing—they are terrible when solidified into concrete expressions of identity, where seemingly a kind of certainty can at last be achieved. Koller is this; I am that! He is a man of the mind; I am a man of action! He has ophthalmia; I have a sore throat!

In the London Review of Books, Michael Hofmann describes Bernhard’s novels as “sculptures of opinion, rather than contraptions assembled from character interactions. Each book is a curved, seamless rant.” This is elegant, but it doesn’t leave enough room for qualification, doubt, and contradiction, or the fracturing entailed by other viewpoints, ours included. Though Bernhard’s worlds are sparse, they are not totally uninhabited. The fact that the narrator’s watching is undercut by the presence of other observers—the cheap-eaters, who have their own opinions about Koller—gives the reader a chance to see Koller outside of either his own or the narrator’s perspective, and Koller’s first encounter with them in the VPK after the loss of his leg sketches out other possibilities of relating to people. Meanwhile, reading Koller’s adumbrations, we understand that what the narrator is drawn to is obsession itself.

It is in this winking diminishment of the obsessive’s characteristic pose that The Cheap-Eaters reveals its unique hand, which is at last more qualified, more wavering than elsewhere. It’s never clear how seriously we are meant to take the narrator’s statements about Koller, or even how convincing he himself finds them. Bernhard’s position is similarly ambiguous. And without the gravitational pull of genius or the black-hole drag of the family, what other points of dependency might light up a literary landscape so shadowed by misanthropy? It might be cheap to say friendship, given all the above, but this is one of the things the book is about, and so I’ll leave it at that.