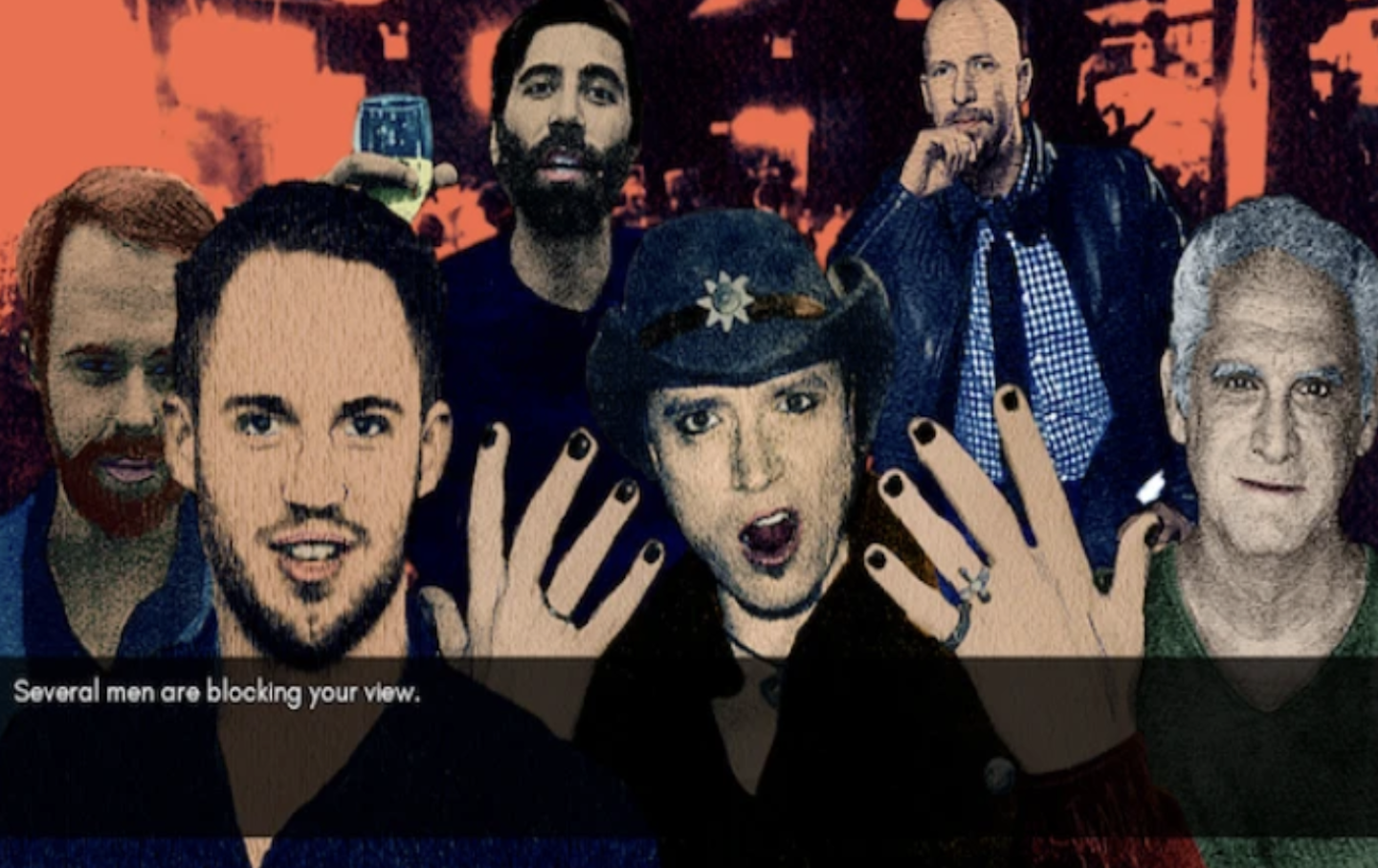 A screenshot of an opening scene in The Game: The Game.

Sitting alone at a bar at night awaiting the arrival of late friends can make anyone a little anxious. For a lone woman especially, the sense of vulnerability in these spaces can be heightened. Unaccompanied, in the eyes of some men, means approachable; personal space is liable to be invaded.

Artist Angela Washko makes this uncomfortable, familiar experience feel ever present and available to anyone in her recently released video game The Game: The Game. Players take on the role of a woman waiting for a friend at a crowded bar, and right as they enter, they are aggressively pursued by different men—modeled after prominent pick-up artists—who use seduction strategies culled from their books, websites, and videos.

This project was made possible through the support of the Eyebeam Center for the Future of Journalism.

The game’s dramatic lighting and Washko’s faded treatment of the background evoke the sensation of disorientation in a crowded, poorly lit dive bar. The foreboding atmosphere is accentuated by experimental band Xiu Xiu’s low synthy drone soundtrack layered with creeping organ notes and drumbeats that slowly accelerate to a dizzying cadence. From start to finish, the game covers a full range of very relatable emotions for any woman who has experienced an unwelcome interaction with a man during a night out.

Below you can play an interactive narrative designed by Angela Washko:


Washko’s project is the culmination of years of in-depth, costly, and emotionally taxing research on women’s treatment in online spaces and how communities, specifically pick-up artists, bring misogynistic views from message boards into the real world. Her research, naturally, began in a video game.

Since 2006, she has played the online role-playing game World of Warcraft. Set in the fantasy world of Azeroth, WOW is massively popular and casually violent. The combination of its aggressive game space and the freedom of anonymity (players operate through avatars) make it fertile ground for sexism and other forms of discrimination. Washko was often the target of such behavior.

After repeatedly fielding sexist interactions with other WOW players over the years, Washko wanted to investigate why the player base tends to create an oppressive, misogynistic space, given the potential of a virtual fantasy arena to be more accessible and equitable than many real-world spaces. To do this, she began a project, The Council on Gender Sensitivity and Behavioral Awareness in World of Warcraft, in 2012.

The project served as an intervention in which she engaged random players in conversations about feminism and the ways the WOW community addresses race, gender, and sexuality. During these conversations, many players who did not identify as feminists recommended that she spend some time in the part of the Internet called the manosphere—a loose network of blogs, websites, and forums dedicated to myriad forms of online misogyny, from men’s rights activism to PUA techniques.

The name Roosh V came up several times during her conversations. Roosh V, aka Daryush Valizadeh, has self-published numerous sex travel guides and spearheaded inflammatory viral campaigns such as Fat-Shaming Week on his recently shut down website Return of Kings. These projects, among others, have earned him a place in the Southern Poverty Law Center’s extremist files, where he is described as “one of the most public and reviled online misogynists.”

Washko took the advice of the members of the WOW community and began studying the manosphere. She started by reading Roosh’s first get-laid-quick guide, Bang: More Lays in 60 Days, followed by Day Bang, 30 Bangs, Bang Iceland, and Don’t Bang Denmark. The books contain general tips (which hotels to stay in, explanations of costs of living, etc.) and guidelines for practicing “game”—the so-called strategies of seduction used by pick-up artists—interwoven with explicit passages describing Roosh’s exploits.

While reading Roosh’s one-sided accounts, Washko became interested in the notably missing perspectives of the women he claims to have slept with, so she decided to seek them out. Using his guides and blog posts, she painstakingly plotted every location where he says he had success, contacting friends abroad to help her disseminate flyers outside nightclubs around the world, and creating an online distribution campaign via social media. Inspired by 1990s media interventionist collectives like the Yes Men, she planned to create a Web-based platform, BANGED, to promote the counternarrative of those women.

After Roosh found out about the project, he and Washko corresponded via e-mail. She arranged a video interview with him and decided to publish it unedited in order to prove her critiques were made in good faith. Despite the vast ideological gulf between them, she engaged him in an open-minded, civil discussion. After publishing the interview, she received a slew of heated e-mails from members of the pick-up artist (PUA) community, with some saying she misrepresented him and others saying she misrepresented the PUA community as extremist by talking only to Roosh, who has built a reactionary, anti-feminist platform around outrage politics. (For example, he endorsed legalizing rape as a thought experiment.) Some of them suggested that she study other dating coaches whose teachings are less unseemly. And in the process, she chose not to publish the interviews from BANGED in order to protect those she interviewed from negative scrutiny.

So Washko began more closely examining other pick-up material, particularly the work of Mystery, aka Erik von Markovik. Mystery became well known as a focus of the 2005 best-selling autobiography The Game, by investigative reporter Neil Strauss (later known by the pseudonym Style). It chronicles Strauss’s involvement in the PUA community, following his evolution from curious onlooker to successful practitioner of Venusian arts—or the art of picking up a woman—under Mystery’s tutelage, eventually becoming his wingman.

Mystery is also, according to Strauss, the originator of the presently popular and much-maligned practice of negging, an emotional manipulation technique in which the perpetrator makes a subtly negative remark about the victim to undermine her confidence and make her subconsciously desire the manipulator’s approval.

The Game goes on to romanticize Strauss’s experience participating in Project Hollywood, a rental house in Los Angeles where a group of pick-up artists lived. Its members envisioned Project Hollywood as an epic bachelor pad that they could use for business (to host expensive seminars for pick-up artists in training) and pleasure (to target, neg, and pick up women).

Ironically, these masters of social dynamics and emotional interactions failed to live harmoniously as a collective, and Project Hollywood fell apart. Strauss details the deteriorating interrelationships in The Game, ultimately denouncing a lifestyle centered on picking up women. He later sought treatment for sex addiction and released a mea culpa, The Truth, but has never renounced profits from The Game royalties and now makes money selling memberships to bespoke life-coaching services for men.

Washko continued her research by studying materials from Real Social Dynamics, a dating-coach company founded during the downturn of Project Hollywood by house members Tyler Durden (aka Owen Cook) and Papa (aka Nick Kho). According to its website, RSD claims to host approximately 1,000 live programs in 70 countries for over 400,000 clients every year. It offers subscription-based video programs that feature a combination of lectures and hidden-camera videos demonstrating a successful pickup in the field. These disturbing recordings plainly show RSD coaches approaching unsuspecting women, whom the men verbally and at times physically harass. These traumatic exchanges are shared widely across RSD’s platforms with men willing to pay hundreds or thousands of dollars to learn how to replicate them.

While digesting and parsing these extensive materials, Washko decided a first-person video game would be an ideal approach to meaningfully share this information because it would allow the player to be placed in the position of the pick-up artist’s target. The format of The Game: The Game is a riff on the dating sim video game genre in which a player typically controls a male avatar with the goal of romancing female characters.

In dating sims there are narrative branches that lead to losing outcomes (failing to seduce female characters) or winning outcomes (sex, marriage, love). The structure encourages replaying to become a more practiced womanizer and to “finish” all the female characters. This framework and language are similar to the techniques used by pick-up artists.

The Game: The Game subverts the classic dating sim format by reversing the roles. The player instead controls a femme-presenting avatar on a quest to meet her friend in a cramped bar full of men. Uninvited suitors insert themselves into the player’s personal space, forcing her to engage in dialogue while each man attempts to seduce her using his particular method.

Washko crafted each interaction by pulling from the archive of materials she amassed, allowing each pick-up artist to speak for himself; the strategies implemented by their digital doubles are lifted word for word from their own writing and teaching materials. Her portrayals reveal each PUA’s affect and personality, ranging from aggressive to pathetic to sarcastic to nerdy and at times so charming that one is momentarily disarmed.

Familiarizing themselves with each pick-up artist’s strategy in an embodied way helps players develop counterstrategies, since the techniques are designed to be inconspicuous. For example, players who interact with the character Julien will notice that he often uses the imperative tense and brief, sometimes conflicting, phrases in rapid succession to overwhelm and confuse his target, creating a false sense of urgency and putting her on the spot. His tactics are even more successful when the target has been drinking and her ability to process the situation is impaired.

The Game: The Game facilitates more favorable conditions for the player, too. She is given the opportunity to experience the interaction sober and at a leisurely pace, which makes his strategies all the more transparent and opposable. This advantage is helpful for unpacking encounters with other pick-up artists as well.

Interacting with one pick-up artist after another makes evident the behavioral patterns and logic that all seduction coaching can be reduced to. It highlights how each pick-up artist interprets and practices this logic differently and allows players to test which counterstrategies are most effective in particular scenarios. The ability to redo interactions that don’t end satisfactorily makes playing The Game: The Game therapeutic in a similar way to rehashing a lost argument and determining and then executing a winning strategy.

After learning the most effective ways to ward off each pick-up artist, it can be very tempting to immediately shut him down, disengage, and go home to avoid reliving these violations. However, if the player can manage to continue, her sustained engagement will be rewarded with a more deeply informed perspective on PUA culture and techniques. Going home with a pick-up artist is not necessarily a losing outcome. The Game: The Game doesn’t shame any player who seeks a hookup. As in life, going home with different men in the game leads to a range of experiences, some of which are humorous and others harrowing.

In a game environment modeled on structures designed by men explicitly seeking to exploit women, it can feel as if there is no true way to win, but fortunately, Washko offers moments of insight and respite. In my favorite ending, you can burn down your assailant’s home in retribution.

The Game: The Game can be downloaded here.