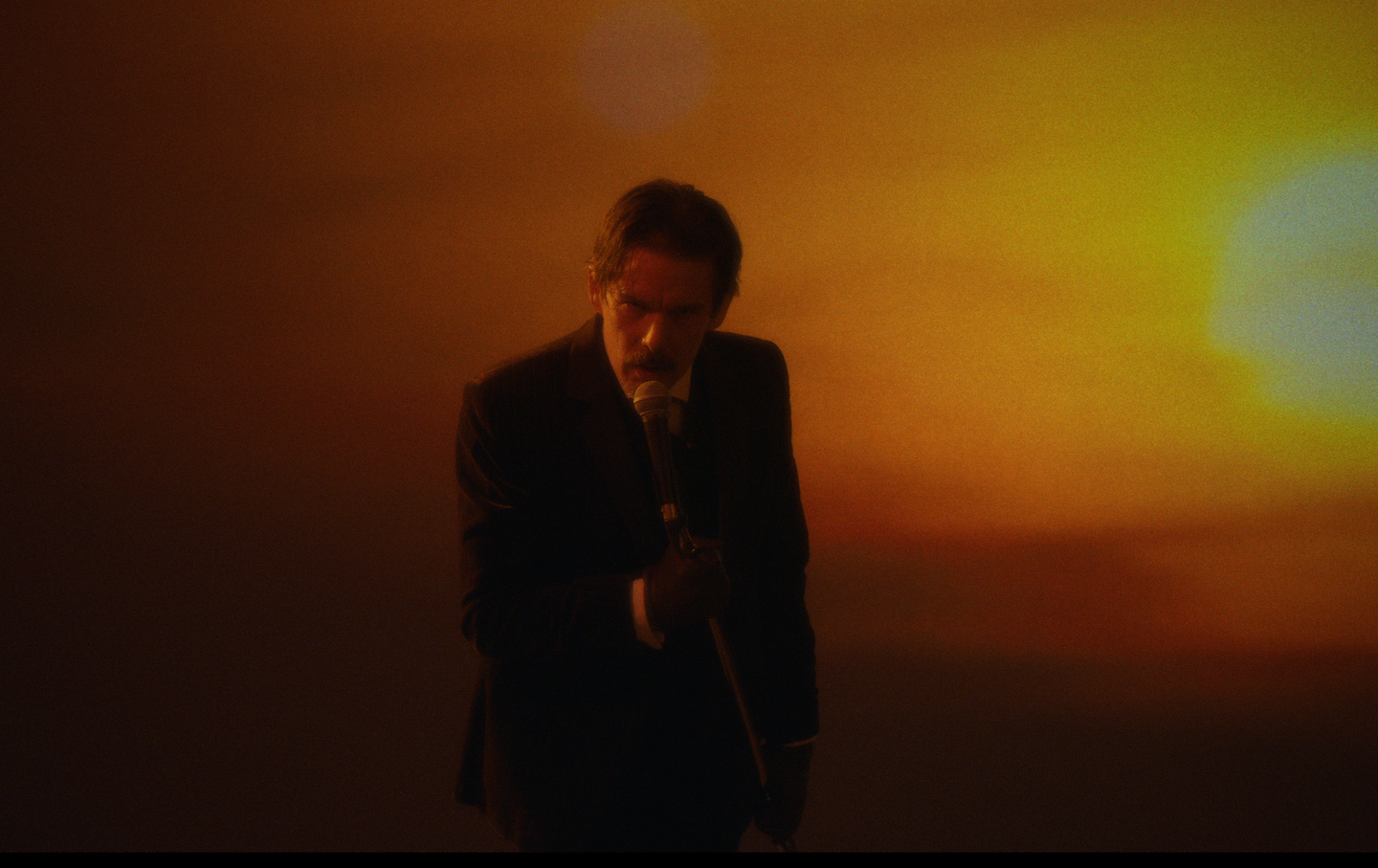 At the 1995 Sundance Film Festival, 100 years after the Lumière brothers presented the first celluloid motion picture, director Michael Almereyda interviewed a crop of independent filmmakers about their thoughts on the future of movies. Were they optimistic or pessimistic? It’s a question broad enough to elicit many different answers, from pointed to digressive. Almereyda and his collaborator Amy Hobby recorded the responses on a plastic Fisher-Price PixelVision camcorder, eliciting an unspoken formal tension between cinema’s past and its technologically democratized future.

The resulting documentary, At Sundance, is an interesting, albeit slight curio, but two aspects of the film still stand out. First, the number of directors interviewed who remain active and familiar 25 years later: Richard Linklater, James Gray, Todd Haynes, Danny Boyle, and James Mangold, to name just a few. Second, how many of their expressed anxieties continue to have purchase. Whit Stillman worried that contemporary filmmakers were too myopic, drawing inspiration from a “thin film culture” instead of from life. Robert Redford argued that new distribution channels and a globalized culture will keep cinema relevant. Larry Gross and Haskell Wexler contended that cinema’s future would be determined by the world’s socioeconomic conditions, about which they were appropriately dark. It’s a group portrait of artists, many in the first act of their career, struggling to fulfill their creative ambitions within a capitalist culture, against the backdrop of a film festival, where art and commerce intersect.

It’s productive to view Almereyda’s latest film, Tesla, through a similar lens. A gauzy biopic of sorts about the famous inventor Nikola Tesla (unassumingly rendered by Ethan Hawke), the film frequently probes the juncture at which ambition meets indifferent financial realities. Almereyda draws many connections between Tesla’s quest to realize his inventions and the perils of contemporary independent filmmaking. Early in the film, Tesla writes his assistant of his experience working under Thomas Edison (Kyle MacLachlan) at Edison Machine Works, saying, “There’s always too much to do, not enough time, never enough money or men, constant fixes, upgrades, [and] emergencies,” which in another context is a faithful description of moviemaking or any other joint creative endeavor.

Throughout his career, Tesla finds himself beholden to multiple benefactors, all of whom are broadly impressed by his talent right until it stops being profitable for them. Some, like George Westinghouse (Jim Gaffigan), manipulate him into undercutting his own economic standing for the survival of the project. At one point, Anne Morgan (Eve Hewson)—Tesla’s paramour, a daughter of J.P. Morgan, and the film’s narrator—wonders what could have been if only Tesla had “someone sharp and smart at his side, an enlightened hustler to steer him through the crass, commercial world.” Is there a more appropriate analogy for a talented director without a canny producing partner?

Almereyda’s interest in Tesla goes back four decades. He wrote a first draft of the screenplay in 1981, which he describes as an “epic science fiction story set in the 19th century,” informed by Terrence Malick’s Days of Heaven and Nicolas Roeg’s The Man Who Fell to Earth, two ’70s films whose personal nature and expansive visual scope inspired Almereyda to become a filmmaker. He held on to the idea but channeled his passion for Tesla’s futurist worldview into the thematic margins of his filmography. (Almereyda explicitly incorporates Tesla into his 2002 film Happy Here and Now, which features a soft-core pornography director whose latest project involves Tesla and a Tesla coil that eventually catches fire and halts his production.) When it was time to get his passion project off the ground, Almereyda made drastic changes to the script, partly to reflect his now 60-year-old perspective, as well as to accommodate the feature’s numerous budgetary restrictions, like a 20-day shoot, limited location options, and scaled-back period production design.

Even with those constraints, Tesla marks the zenith of Almereyda’s filmmaking to date. It’s his third film starring Hawke and the second featuring him and MacLachlan as rivals. (They previously played Hamlet and Claudius, respectively, in Almereyda’s adaptation of the Shakespeare play.) It’s his second nontraditional biopic, after Experimenter, which chronicles the life and career of the psychologist Stanley Milgram. Almereyda’s passion for biographical portraits shows in his nonfiction work (This So-Called Disaster, William Eggleston in the Real World, and Escapes), too. Tesla foregrounds his interest in old and emerging technologies—in this case, alternating-current electricity—and how people move through new, mediated environments. He has interrogated these ideas from the beginning of his career, with his Pixel-Vision experiments in the ’90s through the tech-saturated Hamlet, the early Internet noir Happy Here and Now, and recently, the tender sci-fi story Marjorie Prime.

Almereyda’s avant-garde sensibilities manifest most overtly in his use of non-natural effects, like rear-screen projection, and narrative deconstruction, like fourth-wall-breaking narration, blurred chronology, and ahistorical music cues. In Experimenter the uncanny backdrops and Milgram’s direct address reflect the controlled nature of his experiments on obedience and authority in the light of Holocaust architect Adolf Eichmann’s just-following-orders defense at his 1961 war crimes trial. In Tesla, however, he employs these elements to fictionalize the gaps in Tesla’s biography, which is woefully incomplete, and call attention to the artificiality of historical narratives—how they’re rife with self-mythologizing and ideologically motivated revisionism. Case in point: Anne Morgan plays a role in the main narrative, but she also addresses the audience from an omniscient perspective, commenting on the film’s deliberate falsehoods and using Google search results for her statistics. Befitting a film about money, it’s telling that Morgan, a wealthy philanthropist, effectively controls the narrative. As always, history is told by the victors.

Tesla’s anti-realism, in sharp contrast to its grounded, almost minimalist performances, benefits the film tremendously, given its self-referential drive. While explaining the uses of his induction motor, Tesla claims that it will “do the work of the world” and “set men free.” He constantly describes his inventions in these terms, and it’s easy to perceive the implicit connection to cameras and filmmaking, but Almereyda always recenters the pecuniary problem. In the second half of his career, Tesla’s rhetoric outpaces his output, and when he fails to persuade his patron J.P. Morgan (Donnie Keshawarz) to provide him with another influx of cash to create a global wireless system, the scene plays like a producer pulling funding from an eager director whose ambitious film has gone off the rails. This reflexivity also extends to the film’s formal strategy. Suiting Tesla’s focus on electricity, Almereyda and photographer Sean Price Williams always underscore any lighting source in the film. They frequently bathe the frame in darkness before foregrounding a key light that guides the eye. Other times, light asserts its presence over the characters, as when Tesla sees traveling actress Sarah Bernhardt (Rebecca Dayan) drenched in white stage light. Almereyda teaches viewers to be conscious of where and how light originates in any scene until their awareness seamlessly integrates into Tesla’s. If film, at its most elemental, is constituted by images of projected and reflected light, then Tesla stands as a veritable paean to electricity’s ability to illuminate and clarify action. Ironically, it’s a shame that most people in America won’t see Tesla on a big screen in a theater anytime soon. It’s in that setting that both Almereyda’s and Tesla’s ideas would properly crystallize in real time.