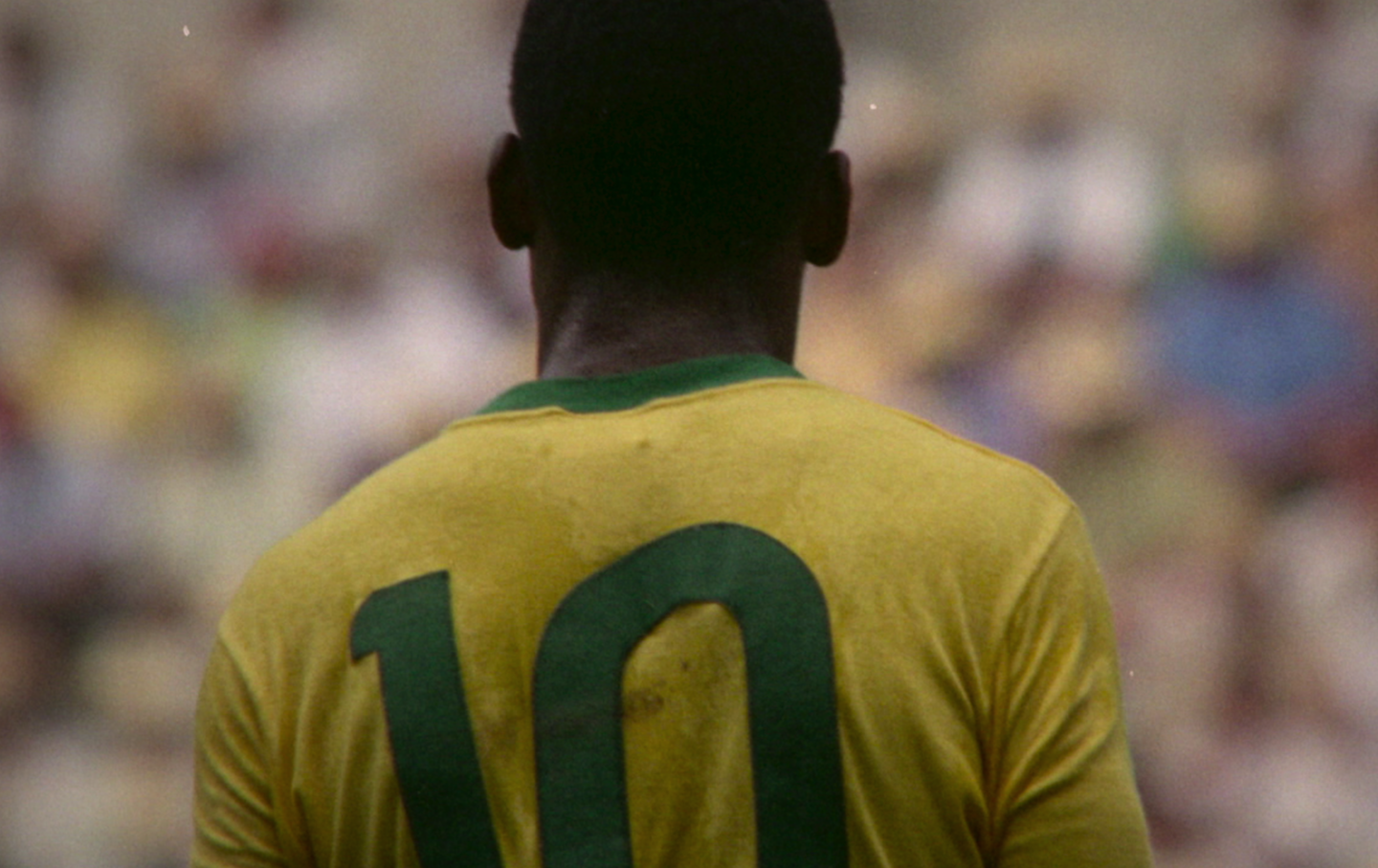 Pelé’s public image has become something of a sad joke in recent years. He is the embodiment of the commercialization soccer has undergone since the first World Cup television broadcasts in the 1950s, when he became the sport’s first global icon. “A perfect representation of his current persona: nothing more than a walking billboard,” Zito Madu wrote in 2015 for SB Nation. When he was enlisted as a brand ambassador for Subway in 2013, Pelé not only recorded commercials but also posed for pictures behind some of its sandwich counters and dressed up for a Premier League game wearing a necktie with the fast food chain’s colors and two branded enamel pins. A BBC journalist wrote around that time that scoring an interview with him “usually means turning up at a fast food restaurant or bank to be met by an ever-smiling Pelé dressed in the colours and logos of his sponsors.” Just months before the Subway ad blitz, he was reportedly suffering from kidney stones and urinary infections, attached to a dialysis machine in an intensive care unit of a Brazilian hospital.

Pelé, directed by David Tryhorn and Ben Nicholas, doesn’t touch on how soccer’s king sold out, at least not directly. The film focuses neatly on the greatest hits of his career: the period beginning with his first World Cup in 1958 and ending with his last, in 1970. It is an earnest attempt to cement Pelé’s legacy for global audiences—including commentary from friends, family, and notable admirers—that also takes stock of his influence on Brazilian culture during a period marked by modernization and, later, a repressive dictatorship. The documentary can be seen as a sort of response to Asif Kapadia’s 2019 HBO documentary, Diego Maradona, a look into how fame eventually devoured one of the world’s greatest talents. In contrast, Pelé provides—if unwittingly—an uneasy portrait of the moral compromises Brazil’s hero made to stay in the game.

Pelé was born Edson Arantes do Nascimento in 1940, in a small inland city called Três Corações. At the time, Brazil was a young, unassured democracy consistently undermined by corrupt elections, military coups, and repressive governments. Economically, the country hadn’t been faring much better: The Great Depression had obliterated the world coffee market, an export the country’s financial health depended on. In 1950, anxieties about the economy and the state of the country more generally spilled onto the soccer field when Brazil hosted that year’s World Cup. The tournament was a disaster. Despite enjoying home field advantage and emerging as the clear favorites to win the tournament, Brazil lost 2-1 to a struggling Uruguayan national team. The defeat resulted in a cultural bruise so deep that writer Nelson Rodrigues coined a term to describe the mental state it threw the populace into: the “mongrel complex,” a collective sense of inferiority.

Eight years later, at the age of 17, Pelé would play in his first World Cup in Sweden. He was an instant revelation, scoring six goals in four games, including two in the final, to lead Brazil to a 5-2 win over Sweden. Overnight, he transformed the country’s perception of its prospects not just in sports but also as an international power. His dominance on the pitch eased the sense of shame, carrying forward the aspirations of an entire country. Meanwhile, abroad, Pelé was quickly associated with an attractive, seemingly effortless style of play. His club, Santos, quickly cashed in and set up summer tours in Europe and later around the world during the off season. Before long, Pelé’s name was synonymous with soccer.

Meanwhile, under President Juscelino Kubitschek, Brazil enjoyed a brief cultural moment characterized by a vibrant and sensual sensibility, as seen in architecture through Oscar Niemeyer’s free-flowing buildings in the country’s new capital, Brasília, in music through the jazz- and samba-infused sounds of João Gilberto’s bossa nova style, and in the fine arts through the country’s Neo-Concrete movement. Pelé was his country‘s ambassador, serving as an evangelist for this renaissance wherever he played.

Then, in 1964, it all fell apart. In a bloodless coup, Brazil’s military took power, which it held for two decades, curtailing public life through a series of decrees. By 1968, the regime had forbidden political demonstration, suppressed habeas corpus, and essentially gutted freedom of the press. Kubitschek was detained. Niemeyer was exiled to Paris. Outspoken artists and musicians, like singer-songwriter Gilberto Gil—who is interviewed in the documentary—were jailed.

As for Pelé? “There weren’t any noticeable differences,” he remembers. Soccer simply “went on in the same way.” He kept his mouth shut, and the dictatorship allowed him to play as he pleased. In the years since, Pelé’s attitude toward politics has often been referred to as apolitical, but a more apt description is that he has an inclination to appease anyone in power. “My door was always open,” he said. “And that includes when things were really bad.” Eventually, Pelé crossed a line: He agreed to a formal meeting ahead of the 1970 World Cup with Emílio Garrastazu Médici, one of the most ruthless members of the authoritarian regime. In the most sobering moment in the documentary, Pelé and Médici can be seen hugging and laughing at the Palácio da Alvorada in Brasília. The dictatorship would go on to kill nearly 500 people and torture hundreds more.

These brief, uncomfortable moments save Pelé from hagiography. For better or worse, Pelé’s reluctance to engage with politics, especially at such a turbulent time, has limited his legacy to the soccer pitch. The inclusion of his relationship with the dictatorship forces viewers to come to their own conclusions on a topic often overlooked or omitted by official histories of his life.

But there are some notable omissions in the documentary, especially on the subject of race. Early on, Brazilian politician Benedita da Silva tells us Pelé was “the most inspiring image that we’d ever had of a poor Black boy,” but it’s unclear what that really meant to Brazil or to Pelé. At one point, Pelé recalls one experience of racism in 1958 Sweden—two children touched his face thinking it was covered in dye—with amusement. Also thrown in is the inevitable comparison to Muhammad Ali. The closest we get to any revealing conversation on race is when his former teammate Paulo Cézar Lima criticizes Pelé’s acceptance of the dictatorship and accuses him of being complicit: He was “a Black person who [was] submissive, accepts everything, and doesn’t answer back, question, or judge.” What were Brazil’s racial dynamics? How did they inform Pelé’s political decisions? These questions are left unanswered.

The directors give Pelé the benefit of the doubt. The film ends with his triumphant 1970 World Cup win, Brazil’s third title in 12 years and the apex of Pelé’s international career, leading the country’s golden generation of players to one final championship before retiring from the national team. Archival footage shows Médici hugging Pelé and posing for a photo with the national team and the Jules Rimet Trophy, but the people of Brazil, then and now, never gave the military credit for the title: It was Pelé’s victory alone.

By ending with the 1970 World Cup, the film conveniently avoids delving deeper into Pelé’s relationship with the military government, such as his reported offer to publicly defend the regime and his willingness to pronounce himself against communism. In the midst of torture, censorship, and forced disappearances, the Brazilian national team was, according to Gilberto Gil, an “oasis” of beauty and hope, a welcome distraction from the brutal realities of authoritarian rule. Its legacy, the film implies, will live on separately.

As it paints an honest portrait of the complex relationship between sports and politics in Brazil, Pelé suggests that the star transcended both. After all, 50 years after Pelé’s last World Cup, hand-wringing and indulging in arguments over whether Pelé should have spoken out, or what he could have accomplished by doing so, feel like empty exercises in counterfactuals. Instead, we are left with the understanding that his career came at the cost of silence, that Pelé was able to continue uninterrupted on his path to eventual glory in large part because of his political apathy. The eternal king of soccer, the athlete more than happy to be the face of propaganda, the man wearing two branded Subway pins on his suit: He’s always been the same Pelé.