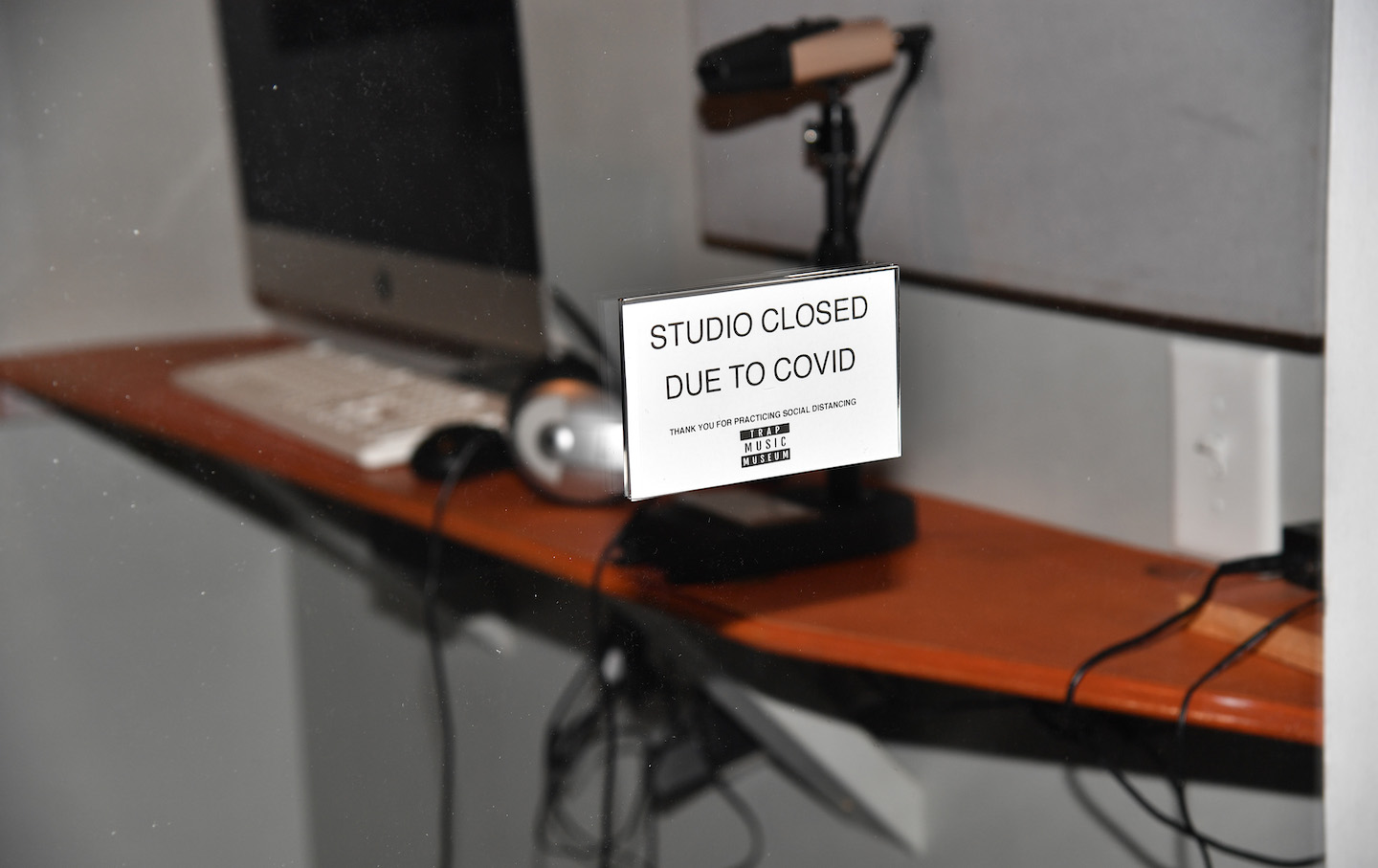 A sign reads, “Studio Closed Due To Covid” at the Trap Music Museum in Atlanta, Ga., 2020. (Photo by Paras Griffin / Getty Images)

Creativity blooms in solitude, or so we believe in our weakness for the trope of the artist as a singular figure tapping the magic well of inspiration to make works of art. James Joyce, in A Portrait of the Artist as a Young Man, said he needed only three things to be equipped to write: silence, exile, and cunning—the first, an attribute of solitude; the second, a means to achieve it; and the third, a tool for its exploitation.

Over the past year, the Covid-19 pandemic has provided artists (and everyone else) with both silence and exile in excess. The open question is, in the context of this public health crisis and the political malfeasance that accelerated its devastation, who among us has had the cunning, let alone the energy, to capitalize on the solitude and make art?

We’ll know with more clarity in time, as who-knows-how-many novels, paintings, movie scripts, plays, and who knows what else hatched under quarantine are eventually published, hung, filmed, staged, or otherwise presented by means no longer restricted to streaming. Early indicators have arrived, meanwhile, in the form of a half-dozen intimate and personal albums of music recorded by singers and musicians working on their own under lockdown. The projects are a varied lot, including a high-profile release by a veteran pop megastar, two wildly divergent instrumental albums by esteemed jazz artists, and three collections of a kindred sort by singer-songwriters performing songs by other writers. (I am referring strictly to music made by a single artist providing all the sounds on the album, not collaborative work such as Taylor Swift’s companion releases Folklore and Evermore, which she wrote and recorded with Aaron Dessner and Matt Berninger of the National, exchanging musical elements remotely.)

The veteran megastar is Paul McCartney, who last year released the third in a series of eponymous one-person-band albums that began in 1970 with McCartney, his first record after the breakup of the Beatles, McCartney II followed exactly 10 years later, after the breakup of another band he had played in, Wings, and his brief incarceration in Japan for marijuana possession. The timing of McCartney III, recorded during the pandemic and released on another round-number, new-decade year, suggests thematic continuity: At a dramatic point of personal reckoning, McCartney turns inward to record music so deeply his own that he must give it his own name.

There is no doubt some truth in that. Still, the fact is that McCartney has recorded a great number of songs on his own, playing all the instruments, over the course of his solo career—and, in fact, during his years with the Beatles, when he cut “Yesterday,” “Why Don’t We Do It in the Road?,” “I Will,” and other songs without any of his bandmates. The majority of his albums have included at least a few tracks he made mostly or solely by himself. In 2005, he played more than 30 instruments, including violin and flugelhorn, on Chaos and Creation in the Backyard, a Grammy-nominated highpoint of his solo work, with additional musicians contributing to some tracks. Three years after that, he played all the instruments on every track of Electric Arguments, the third project he recorded under the pseudonym the Fireman with the producer Youth. Working alone, making all or most of the sounds, is not something exceptional or fraught with special meaning for McCartney; it’s one of the ways he has always worked.

“I was very lucky to be able to come to my studio and make some music, which took the edge off the whole quarantine thing,” McCartney said of McCartney III, in an interview with NPR. “I wasn’t concentrating. I was just, ‘Sounded good? Right, on to the next thing.’ It’s got a very loose feel to it.”

Looseness is indeed the album’s defining quality. The opening instrumental, “Long Tailed Winter Bird,” which returns in expanded form as the album’s coda, is an appealing guitar riff repeated but not developed. “The Kiss of Venus” and “Pretty Boys” are pleasant little acoustic-guitar ditties, while “Lavatory Lil” and “Slidin’” are minor ’60s-style English-rock rockers, and “Deep Deep Feeling” and “Deep Down” sound like no more than noodling around in the studio—an efficient way to take the edge off the quarantine thing for McCartney, perhaps, although a bit of edge is precisely what the music could have used. If McCartney III is Paul’s response to the pandemic, it shows him responding the same way he usually does to most of whatever has gone on in the world around him, by playing without concentrating, stopping when it sounds good, but not sticking with it until it becomes great.

Working in a wholly different musical mode, the jazz composer and saxophonist Chris Potter also played every instrument on another one-person-band project composed and recorded under lockdown, There Is a Tide. Potter, well regarded as an inventive post-bop saxophonist, has evidently had a secret life as a jazz-pop polymath. On this album, he plays more than a dozen instruments: piano, electronic keyboards, acoustic and electric guitars, bass, drums, percussion, clarinet, bass clarinet, flute, and alto flute, as well as various saxophones. The music is wholly unlike his best-known work as a saxophonist in small, improvising jazz groups. The 10 songs on There Is a Tide are true songs without words: tightly constructed, neatly arranged instrumentals that could be the backing tracks for an unknown Steely Dan album, waiting for Donald Fagen’s vocals. Jazz fundamentalists would probably bridle at the quality of that disparaged genre, jazz-rock fusion. They would be missing the point of this music, as I take it, which is not to dazzle or to challenge the listener, but to soothe the listener’s nerves and to challenge its creator.

“This project grew out of a wish to continue creating at a time when most of the usual channels of musical expression were unavailable,” Potter explained. “I’ve never been so acutely aware of my limitations. In addition to the difficulty of trying to get good performances on every instrument, there was the challenge of recording without a proper studio.” In lockdown, with solitude forced upon him, Potter sought to assert his creative autonomy by assigning himself a set of tasks he had never tackled before. That he succeeded to make a large-ensemble album with no ensemble is a testament to the perseverance of his artistic will and, more impressively, unexpected evidence of the enjoyability of fusion.

One of Potter’s peers in the higher strata of contemporary jazz, Fred Hersch, found comfort in his comfort zone. Long distinguished for his many concerts and recordings of solo piano, Hersch set up recording gear in his house on a mountainside in northeastern Pennsylvania, and sat down at the Steinway grand in the living room overlooking the woods. He turned to songs meaningful to him over the course of his life and tunes that evoke aspects of solitary existence: Joni Mitchell’s “All I Want,” Jimmy Webb’s “Wichita Lineman,” Cole Porter’s “Get Out of Town,” Duke Ellington’s “Solitude.” While Hersch is a prolific composer with a deep and varied songbook of original music, all but two of the 10 tracks on his lockdown album, Songs From Home, were written by others—but reinvented by Hersch as he played and followed the lead of his memories and fertile creative imagination. In the process, these songs became his and his alone.

Like Hersch, three singer-songwriters respected for their original music gravitated to songs by others for albums they recorded under lockdown. Marika Hackman, the English singer and multi-instrumentalist, found herself living at her parents’ house for a while during the pandemic and retreated to a room with some guitars and synths to record songs by contemporary artists such as Grimes, the Shins, Beyoncé, and Radiohead for an album titled, plainly, Covers. Her fellow songwriter A.A. Williams, working alone at the piano in her home in North London, recorded spare reconsiderations of songs by Nick Cave, the Cure, Nine Inch Nails, and other art-rock stalwarts for her Songs From Isolation. (Individual tracks trickled out for while, with the full album released on February 12.) And Emel Mathlouthi, the singer and political activist widely known as the “voice of the Tunisian revolution,” recorded an album of covers from an eclectic assortment of sources—including Jeff Buckley, Nirvana, Black Sabbath, and System of a Down—as half of a double album, The Tunis Diaries. For the other half of the set, Mathlouthi rerecorded material from her own catalog in stripped-down versions that are of a piece with the covers, essentially covering her own songs.

At first glimpse, the preponderance of cover renditions in these projects might suggest a lack of originality, as if isolation had siphoned creativity. The sparse instrumentation, with the original harmonic structures of the songs often reduced to a few simple chords, could be taken to reinforce that proposition. Yet I hear something else in all three of these singer-songwriters’ cover projects, as well as in Hersch’s Songs From Home. I hear profound feeling—yearning, longing.

In the palpable emotionality of performances as raw as exposed bone, artists working all alone in a room, deprived of their ability to connect with their bandmates and their audiences, seem to be seeking to connect with other musicians throughout history. In this sense, doing covers is a way of breaking out of lockdown and joining the rest of the world again. After all, interpretation is a creative art, and it, too, can bloom in solitude.